Flame on the Crown of Your Influence 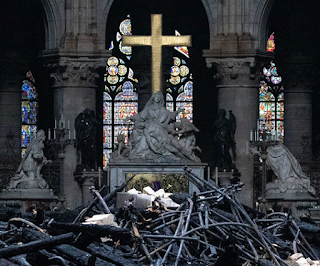 The landmark Notre Dame cathedral in Paris was heavily damaged by fire yesterday. Happily, much of the structure is intact and many of the priceless works of art had either been previously moved or were rescued.
It took a very long time to build this architectural masterwork, and it will take a long time to repair it. Donations are already being made for its restoration.

Let's just take a brief look at some of the more interesting synchronicities pertaining to the fire, especially as they pertain to themes we've been exploring here. 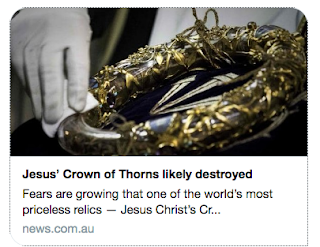 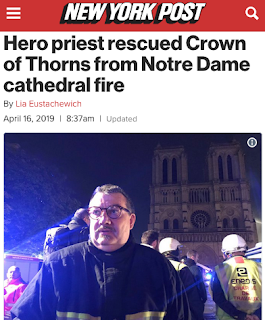 Notre Dame houses many ancient relics sacred to Catholicism. One of which is the Crown of Thorns, which a first was reported to have been destroyed and then was reported as having been rescued.

The actual term originally used for the Crown of Thorns in the Gospels is stephanos, meaning "Garlands."

When they had twisted a crown of thorns [stephanos], they put it on His head, and a reed in His right hand. And they bowed the knee before Him and mocked Him, saying, “Hail, King of the Jews!” (Mat. 27:29) [emphasis added] Here the Roman soldiers clearly are mocking Jesus as royalty, yet He is wearing the stephanos.

This use is contrary to the assertion that stephanos is a victor’s crown whereas diadēma represents royalty. Hemer explains the use of stephanos for royalty in this situation because the crown of thorns is literally a wreath: “There is certainly no reason for denying στέφανος [stephanos] its most usual sense here. It is ‘wreath’, not ‘diadem’, Kranz, not Krone. 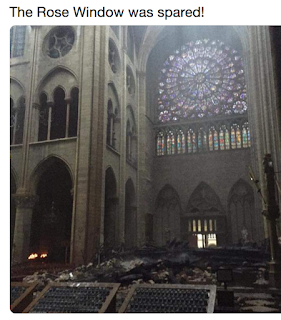 The famous Rose Window escaped damage during the fire... 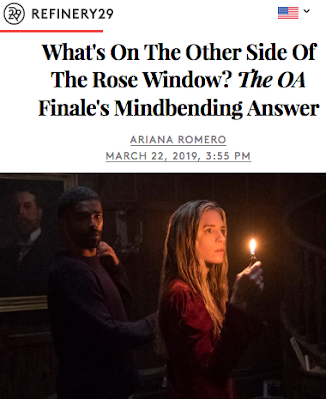 ...synching up with the new series of The OA, in which a Rose Window was a central plot point. 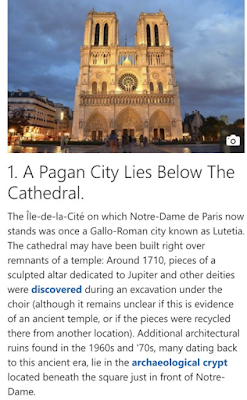 Like many of Europe's cathedrals, Notre Dame was built atop a pagan temple. Note it was dedicated to Jupiter, whom we've been discussing quite a bit lately. 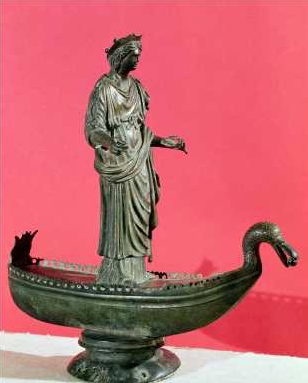 Our pal Stacey reminded me that Notre Dame sits on the banks of the Seine, which is named after an ancient river goddess. Notice the duck boat, calling Aphrodite to mind.

The goddess was said to grant powers of healing. Sacrifices were made to her, including animal sacrifices.

Joan of Arc was beatified at Notre Dame. 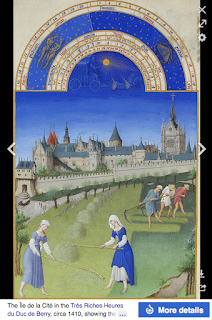 Notre Dame sits upon the Île de la Cité. Note this medieval depiction of the island also includes a horoscope. 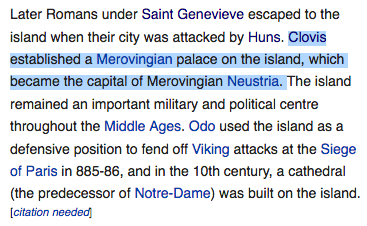 King Clovis, who established the legendary Merovingian Dynasty, made his palace there. 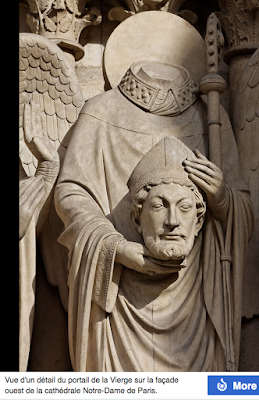 The famous outer walls of the Cathedral depict a number of religious figures, including St. Denis, Patron Saint of Paris. 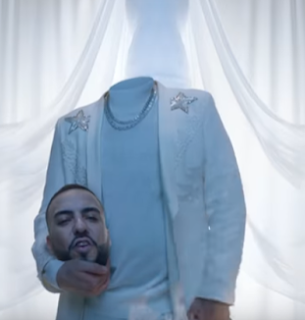 And here again is an identical image from the Jennifer Lopez video we looked at recently. It was released a week before the Notre Dame fire. We also see friezes of Jupiter Ammon in the clip as well. 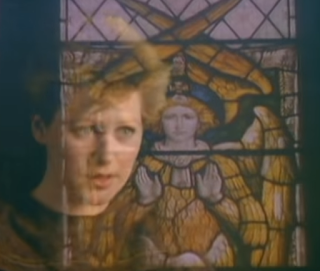 We saw how the new JLo video corresponded to a song Secret Sun reders should be well-acquainted with. The video for that song, released in 1984, was filmed in a Cathedral that's since been destroyed.

Oh, by the way-- the Cathedral was at the Holloway Sanitarium in Virginia Water, England.
As in Virgin Mary. As in Our Lady. 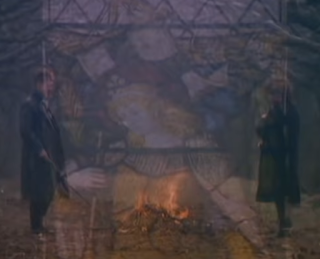 There are also numerous dissolves between the Cathedral and fire in the video, specifically a fire burning in a forest. This too syncs with Notre Dame: 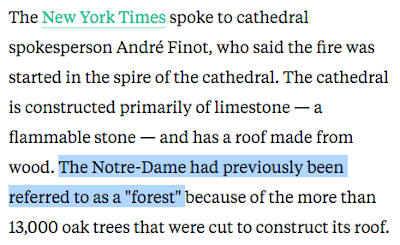 But it should be also noted that the singer featured in that video later wrote a song specifically about Paris (which we've looked at before in another context), including a stanza about Notre Dame.

Naked and caught on the Île de la Cité
What a holy pew, is of eleventh century
Full of shame and a fearless decay
Formed into an angel
From some flower
Fabulous and dream of Eve
Flame on the crown in her influence 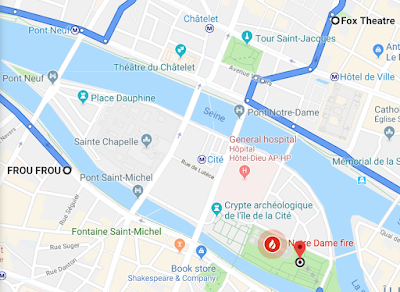 The song-- "Road, River and Rail"-- is followed by "Frou-Frou Foxes in Midsummer Fires." The red marker is over the Square Jean (or John). St. John's Night is when the Midsummer Fires are lit.
So we see a triangle formed by "Frou From," the "Fox Theatre," Square Jean and Notre Dame. 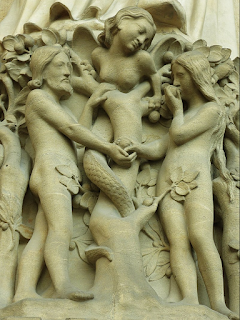 Adam and Eve are also depicted on the outer walls of the Cathedral, in which the Serpent (symbolizing Draco) is portrayed as a woman. 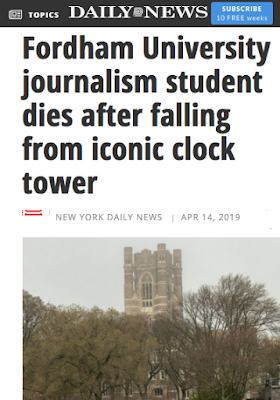 A Twitter friend pointed out tha the day before the fire--Palm Sunday-- a young woman died in the bell-tower at the Jesuit-run Fordham University. Another university sync noted by many, in this case, Reader Khadir:

And on 4/14 (14/4, as the French would write it), just 1 day before the fire, the mayor of South Bend, IN (coincidentally, my old stomping ground), announced he is running for President. South Bend's only claim to fame is as home to Notre Dame College. 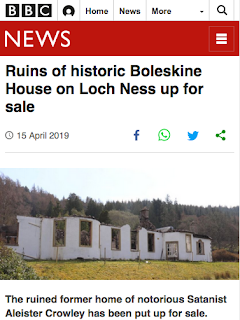 The same day of the fires, Boleskine House--itself destroyed by fire-- was put up for sale. It was built by Clan Fraser, who sold it to Aleister Crowley and was later owned by Jimmy Page.
Kenneth Anger made his first cut of Lucifer Rising there. 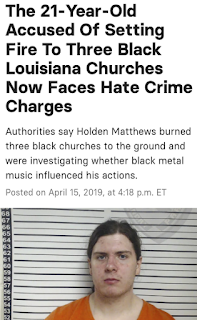 Also on Monday, a man was arrested for setting three churches in Louisiana ablaze. 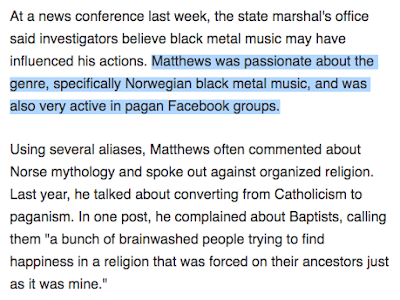 Accounts have it that the arsonist was inspired by his love for Black Metal, the mutant stepchild of Led Zeppelin's occultic hard rock.