Stanley Kubrick and the Reality Stargate 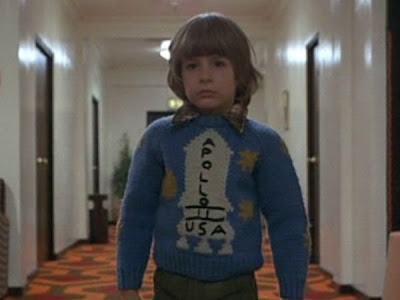 Gnostic scholar Jay Weidner has been making the rounds with a new film series called Kubrick's Odyssey. It's Weidner's contention that Stanley Kubrick was enlisted to help manufacture film and photography for a simulation of an Apollo 11 mission for public consumption, which would keep the real mission secret.
That the making of 2001: A Space Odyssey was in fact an R/D project financed by interested parties and that the techniques Kubrick and his team developed were later used by NASA for the Apollo 11 fakery. Here's the pitch for Jay's DVD:

This famed movie director who made films such as 2001: A Space Odyssey, A Clockwork Orange, The Shining and Eyes Wide Shut, placed symbols and hidden anecdotes into his films that tell a far different story than the films appeared to be saying. Jay Weidner presents compelling evidence of how Stanley Kubrick directed the Apollo moon landings.

He reveals that the film, 2001: A Space Odyssey was not only a retelling of Arthur C. Clarke and Stanley Kubrick's novel, but also a research and development project that assisted Kubrick in the creation of the Apollo moon footage. In light of this revelation, Weidner also explores Kubrick's film, The Shining and shows that this film is, in actuality, the story of Kubrick's personal travails as he secretly worked on the Apollo footage for NASA. 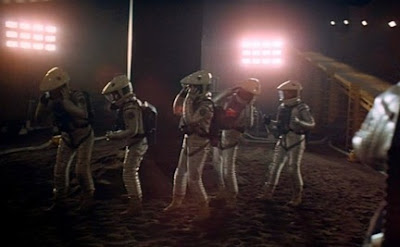 The story has it that 2001 was based on Clarke's short story "The Sentinel," but anyone's who read the story will tell you the connections to it are thin. The tone (and intent) of the film is also quite different from Clarke's novelization, as it is from Clarke's fiction in general.
One of the most significant differences is personified by Heywood Floyd, who's a hero to Clarke but a villain to Kubrick; a bagman and hush-up artist whose obsessive secrecy is responsible for the deaths of the Jupiter mission crew.
Now, dozens of people have written dozens of essays about 2001, interpreting the film in dozens of different ways, from the sublime to the cringe-inducing. It's a film that tempts people to read any number of symbolic or philosophic narratives into it, because the actual narrative of the film is unacceptable on its face.
You can expound upon myth, technology, sociology or even gender politics (believe it or not) in the film but you can't, you mustn't-- most especially if you work in academia, which blithely accepts all kinds of idiocy-- ever address what Kubrick himself went to unprecedented lengths to explain about the film's meaning.
In Kubrick's own words:

[Extraterrestrials] may have progressed from biological species, which are fragile shells for the mind at best, into immortal machine entities and then, over innumerable eons, they could emerge from the chrysalis of matter transformed into beings of pure energy and spirit. Their potentialities would be limitless and their intelligence ungraspable by humans. These beings would be gods to the billions of less advanced races in the universe, just as man would appear a god to an ant.

They would be incomprehensible to us except as gods; and if the tendrils of their consciousness ever brushed men's minds, it is only the hand of god we could grasp as an explanation. Mere speculation on the possibility of their existence is sufficiently overwhelming, without trying to decipher their motives. The important point is that all the standard attributes assigned to god in our history could equally well be the characteristics of biological entities who, billions of years ago, were at a stage of development similar to man's own and evolved into something as remote from man as man is remote from the primordial ooze from which he first emerged.

The only reason the film is a mystery to polite society is that the extensive interviews that Kubrick gave about the film's meaning must be ignored at all costs by establishment opinion makers. Why? Because the actual narrative-- what is being shown on screen, not in the imaginations of amateur film critics and adjunct professors-- is a government cover-up of historical proportions. 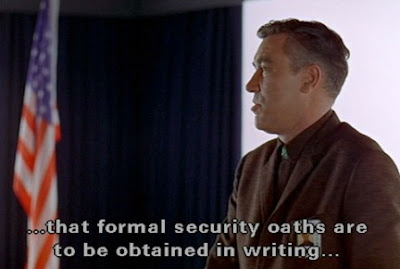 The Heywood Floyd of the film is not the earnest science-hero of the Clarke novels, he's a duplicitous, well-trained overlord, whose mission it is to remind the residents of Clavius to keep their god-damned mouths shut and sign the non-disclosure forms and security oaths already.
Just how good Floyd is at his job is revealed on the space station, when he deviously leads a group of inquiring Russian scientists into buying into the bullshit cover story about an epidemic at Clavius. For no reason at all he fails to inform the Jupiter mission crew about the true nature of their mission, leading the onboard AI to reasonably assume that they are a threat to the mission and hence decide that dead men tell no tales. 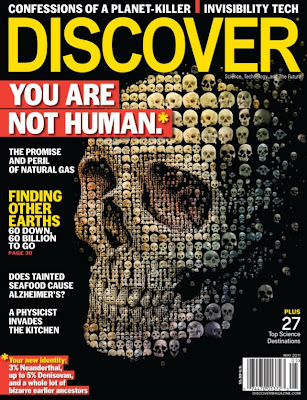 What is being covered up? Proof of the most dangerous idea in the world. That humankind is the product of outside intervention (using terms like "alien" seem ridiculous, if indeed this intelligence essentially created us). As always, theories and arguments are no threat to the established order-- they have all the money in the world to put forward counter-theories and debunkers-- but cold, hard evidence most certainly is.
A lot of theories have been put forth by Apollo 11 theorists, from the Van Allen Belt to the insufficient technology, even to theories that the Moon is crawling with aliens and mankind is forbidden to step foot on it.
But 2001: A Space Odyssey itself presents us with another theory, hiding in plain sight.  Namely that too close a look at the Moon- especially the areas in which NASA most wanted to look- would provide that dreaded proof that someone (take your pick) besides us had been there first.
In other words, the Moon missions weren't just some scientific lark- the crews were sent to specific locations that were determined to be of particular interest in order to see exactly who or what had been to the Moon before us.
There's no shortage these days of theories and stories that NHI (non-human intelligences, in place of more loaded terms like aliens or ETs) have bases on the Moon, or that the Moon is an artificial satellite. The new Transformers film will delve into this, fresh off the franchise's AAT bonanza of the previous film.
But there's another narrative at work, one tying into the Ultraterrestrial theme of the Transformers franchise (that hidden Watcher race again) but also the induced reality of so-called alien abduction reports (that we discussed in Part 2 of this series).

Because an induced reality is exactly what we see Dave Bowman go through in the so-called Stargate sequence. For all intents and purposes, Bowman's experience is identical to any number of abduction accounts in UFO literature. He's zooming along in his space-car, he's zapped by some kind of emission from the Monolith and all over a sudden he's zooming through the cosmos, missing time like you wouldn't believe.
Do note that Bowman doesn't actually go anywhere- the entire trip is transmitted into his brain by the Monolith (the signal comes at exactly 2:01:42). Granted, Kubrick doesn't use the laser beam of the abduction reports he almost certainly had read (many of which were classified at the time the film was being made) but where does Bowman finish this trip? 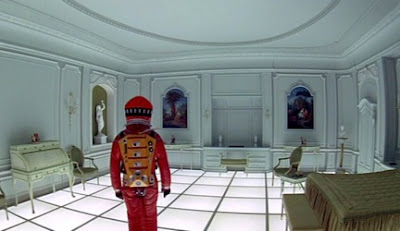 In an oddly-lit white room, exactly as described in so many abduction reports dating back to the early 50s. In fact, one of the most famous cases involving the white room also includes a beam-zapping- namely the Travis Walton "Fire in the Sky" case:

He had now left the large craft, and entered a large room. Within this room he could see several other smaller saucer-type crafts. Travis was now taken through a hallway to another set of doors, which also automatically opened. Through this door he entered a totally white room with a table and a chair. Travis' attention was immediately drawn to three other humans in the room.

Bowman prefigures this in his own abduction (which itself is prefigured in the ancient Mithraic Liturgy).
And what does he become? 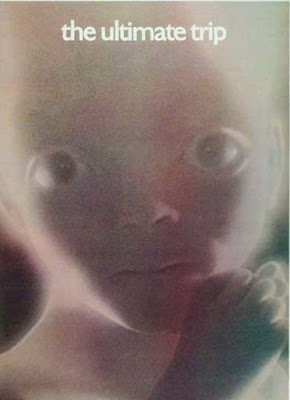 The Starchild, so oddly reminscent of the alien Greys seen in so many of those same abduction accounts. Even more startlingly, the Starchild travels through space in a bubble, almost identical to an image that many Secret Sun readers are familiar with... 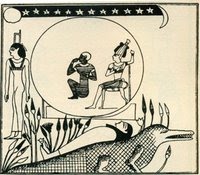 ...the globular craft that Horus- the original Starchild- rides in with Osiris on his way to Sirius. This image is from Budge, but it's carved in stone in Philae, another site familiar to regular readers. 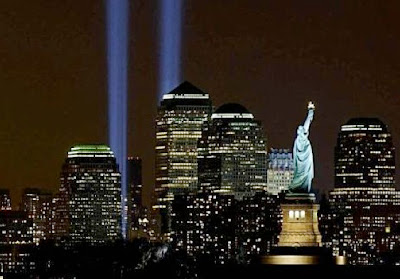 Sirius and beams bring us back to a motif I was looking at in the early days of this blog- the Heavenly Beam seen in so many posters for so many science fiction blockbusters. And as we discovered in the Stairway to Sirius posts, that heavenly beam at Ground Zero stands directly between the Stairway and the Monolith-- the Millennium Hotel based on the alien transmitter of 2001. 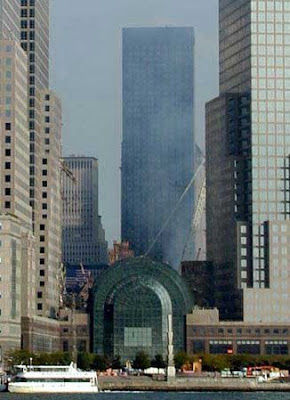 The Stargate and the Monolith in living color
So, when people talk about "disclosure," what's the real mystery to be disclosed?
Does anyone really believe that the world would flip out if contact were made with a bonafide ET race?
What's more, given how long strange disks have been seen flying around in the sky (forever, basically) or how many times people have encountered weird little critters with bald heads and huge eyes over the past few thousand years does it really seem that we are talking about "aliens?" I don't think so anymore.
But believing they are extraterrestrial might be a lot more comforting to some people than what we have been dealing with since the beginning of our time on this planet. Not that I think it should be, but only a fool would underestimate humanity's need to see itself not only as the crown of creation but as the masters of its domain. 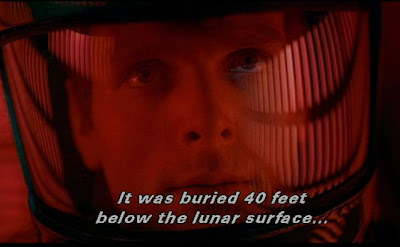 • Jay Weidner has put forth a compelling argument that Stanley Kubrick was involved in faking visual documentation of the Apollo missions, using techniques he perfected in 2001, in order keep the real missions secret.
• Weidner also argues that The Shining isn't about the Stephen King novel but a veiled allegory as to Kubrick's role in the coverup.
• You don't need to look any farther than 2001 itself for an unveiled narrative about a coverup concerning a Moon mission.
• The Stargate sequence- which has puzzled so many people for so many years - might in fact be a stylized retelling of the experience commonly referred to as alien abduction.

• And lastly, shit's getting weird out there....