You might think being a geek should prime you for the Transhumanism Revolution, but in reality it should also prime you against it.
For every Six Million Dollar Man there's a race of Cybermen or Borg or take your pick. William Gibson's Sprawl novels presented Transhuman modification as a ubiquitous consumer product, but what part of "dystopian" do you not understand?
Warnings about Transhumanism are nothing new in sci-fi, as we can see in yet another must-see episode of The Outer Limits.
The more I watch the original Outer Limits series, the less I see it as sci-fi and the more I see it as subversion. Children of powerful men often take pleasure in undoing their father's work, and I can't help but think Leslie Stevens was taking pleasure in collating all of the loose talk and dark whispers he gathered from dinner parties and golf tournaments that his Admiral father threw into a stick that could poke the eye of the paranoid National Security State.
You know, the same exact people that made his life so comfortable. 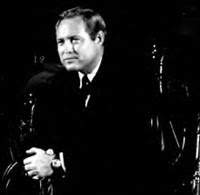 Outer Limits creator Leslie Stevens
The story goes that Stevens was disengaged and Stefano was gone by the shortened second season of the show, but first year showrunners are usually responsible for picking scripts for the second season as part of their first season duties. Which may explain the weird, disjointed flavor of season two; dark and heavy scripts, filled with thorny subject matter that's much deeper and much, much weirder than the usual sci-fi of the time, often foiled by low-rent production values and corny-ass direction (the second season also lacks that weird Stockhausen-on-mushrooms sound design that made the first so magical).
But the script of "The Brain of Colonel Barham" still very much has that telling tales out of school flavor that we've seen so much of in the first season of Outer Limits. Given the wacked-out pipe dream mentality we regularly see in DARPA press releases, it's not hard to imagine that Pentagon dreamweavers were trying to figure a way to implant human consciousness into computers, even into the glorified abacuses of the early 60s.
After all, these are the same geniuses that thought you could use LSD to create an army of mind-controlled zombies. Given that Ken Kesey and Ted Kaczynski are the two most well-known guinea pigs for that operation, it's a lead-pipe cinch that "blowback" wasn't in the MIC lexicon at the time.
That same kind of Space Age hubris is very much in evidence in "Colonel Barham." As are the well-publicized anxieties about the Van Allen Belt, which Stan Lee and Jack Kirby wove into the Fantastic Four's origin.
There's a much deeper archetypal stream running through the story- it's kind of a fable about the rise and fall of modern America, a powerful, nearly godlike entity that decided that the "rules didn't apply" and that its allies were no more than its puppets.
There's a hell of a lot of subtext going on here, warranting repeating viewings. Of course that's par for the course for The Outer Limits. In this case it's political, and not sexual as we see so much of in the first season. But there's some of that as well, given the discussions of infidelity which are pretty frank for 60s prime time TV.
Other researchers have commented on the interesting behind the scenes connections between The Outer Limits and Star Trek, which in the overall exegesis we're exploring here might go a lot deeper than sharing props and actors. Colonel Barham gets a cosmic makeover in the second Trek pilot, "Where No Man Has Gone Before" as crewman-turned-space god Gary Mitchell.
Here we see mind and machine melding, with apotheosis-as-apocalypse arising from psychic powers run amok (the link between psi and eschatology is something we saw in the Ten Thirteen Universe, vis a vis remote viewing).
After all there's no place to hide from a psychic, right? Psi would make politics obsolete, since the art of politics is so dependent on the art of lying. We also see the inevitable result of apotheosis in both 'Colonel Barham' and 'Where No Man'- a casual disregard for the un-ascended.
This isn't a sci-fi revelation, it's basic human nature, backed up by thousands of years of raw experience. The first thing the guy at the top of the hill always seems to do is take a long and hearty piss on everyone beneath him. It doesn't take a psychic to predict that's exactly what we've got in store for us on the other side of the Transhuman Revolution.

RANDOM STRANDS OF CONNECTIVE TISSUE • "Gary Mitchell" is played by Gary Lockwood, who ran into a kind of Colonel Barham in reverse in 2001: A Space Odyssey. HAL thought that he was more qualified to complete the Jupiter Mission, just as Barham was more qualified than General Barton, the astronaut played by William Shatner in The Outer Limits episode, "Cold Hands, Warm Heart."
• "Cold Hands" also featured Malachi Throne, who guest-starred in the Star Trek episodes, "The Menagerie, Parts One and Two." That in turn was based on the original pilot which combines alien abduction and pure AstroGnosis.
Given Roddenberry's own connections, you can't help but wonder if something was being put across that could only be written between the lines. All the more so since he was obviously writing scripts drawing on ancient Gnostic texts that hadn't even been released to the general public yet.
• Sally Kellerman appears in "Where No Man" as Mitchell's chosen mate. Well, chosen post-apotheosis, that is. In an earlier scene her character resists Mitchell's flirting and is then dismissed as a "walking freezer unit." For anyone unfamiliar with the arcane codes of Old Hollywood, we're being told here that she's a lesbian.
The more daring Outer Limits also cast Kellerman as a lesbian in a marriage of convenience with Martin Landau in its MacBeth rewrite "The Bellero Shield." Her father-in-law is played by Neil Hamilton, better known as Commissioner Gordon from the old Batman series.
Hamilton had his own marriage of convenience in the Outer Limits episode "The Invisibles," a sci-fi allegory of the Cambridge Spy Ring. Joseph Stefano's scripts are filled with that kind of embedded double entendre.