The Year of Thinking Magically: Possibility

I'm not going to try to define what magical thinking should be in terms of method or dogma. I don't really subscribe to either. But I do have what I think is a very practical goal or result that magical thinking should lead you to, and that is a sense of possibility.
Possibility is a rare commodity these days. And it seems there are a lot of people whose profession is essentially to limit possibility. There's the whole concept of extreme possibility that we've covered a lot here, but that's a loaded term that tends to lead to some interesting but not immediately applicable side roads.
Tonight, I was trying to define my approach to pop culture -- specifically sci-fi -- when talking to Cosmic Gnostic for an upcoming podcast. The word I was looking for was scrying, as ridiculous as that might sound. The reason I write about the specific pop culture artifacts that I do here (Kirby, TXF, etc.) is that they tend to be the richest sources for whatever it is I'm looking for, whether it's syncs, symbolism, subtext and/or memes. It's gotten to the point that this scrying process takes over my superficial experience of the work in question.
And of course The Outer Limits has been an absolute motherlode for me over the past year. I forget exactly how this particular episode recently crossed my path, but I wasn't looking for it. But on rewatching it I realized it tied directly into the the ideas I've been exploring with the whole concept of magical thinking.
When I hear the word scrying, I immediately think of Dee and Kelley and their secret alphabets and that's exactly what this episode is about. It deals with two adolescents who've been trapped in childhood due to outside circumstances, but who are saved by magic. And as Alan Moore explained back when we started this journey, magic here is based in language (which as Burroughs informs us, is a virus from outer space). 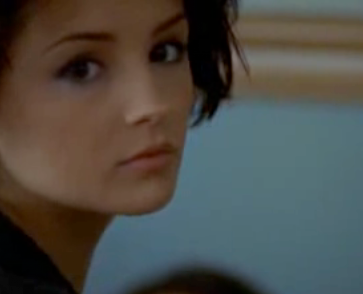 We see a young girl (played by Rachel Leigh Cook, who looks like a living kewpie doll here) who hears voices (again, usually the definition of madness) and is haunted by dreams and visions. The authorities want to literally cut the magic out of her head and the rabble think she's a witch responsible for the town's multiple tragedies.
Unable to put her visions into words, she resorts to sculpture instead. The obligatory (ancient) alien probe (covered in secret alphabets, just like its later counterpart in The X-Files) is simply a concretization of the principle of magic, just like nearly all of the science is in most sci-fi, and maybe a lot of our ostensible science science as well.
So what this story is really about is a young woman who wants to recapture the magical thinking of childhood and bring it with her into adulthood.
This is something that artists have to do-- good ones, anyway-- since creativity is itself a completely irrational act. It's also the only socially acceptable form of magic these days. The magic also helps her solve the great dilemma of her life, which is as it should be, since true magical thinking should necessarily lead to discovery and problem solving.
Childhood is-- or should be-- a time of magical thinking as well as a time of great possibility. It all comes very easy to kids, even those in bad circumstances. It makes you wonder if all of the scholastic pressure that's being put on certain kids these days is part of an attempt to rub out that magical thinking and limit possibility, because as far as I can tell that's exactly what it's doing.
Strangely enough, this episode is directed by Catherine O'Hara, of SCTV and Beetlejuice fame, among others. Jonathan Young --who plays Nikola Tesla on Sanctuary-- plays the young conspiracy theorist.
NOTE: Cassie's magical initiation takes place in a cavern, that most venerable place for magical transformation. See also subway stations, in the case of Captain Marvel and Nikopol.
at January 10, 2021