Well, a lot of you have seen the BBC Superpowers promo by now. It's fascinating not only on the face of it - meaning the alien subtext - but also in that it implies a separation of the human race between those who use the Internet and those who don't.
There's a powerful yet unspoken posthuman subtext, but also a kind of techno-utopianism that I thought went out with the Quadra. But the spot also caught my eye since it seems to have been inspired by The Outer Limits, particularly the second series, which aired on Showtime in the 90s. 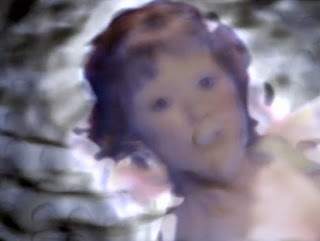 Especially this episode- "The Beholder" in which a blind professor's sight is restored using- of course- a drug using technology developed in space. The professor's sight is restored, but he also is now able to perceive aliens- a beautiful, red-headed alien stranded on Earth, to be precise.
That's a common theme on the The Outer Limits; alien contact that comes about through a transformation of the individual. Contact that is dismissed by everyone else as a hallucination. Well, everyone besides shadowy government spooks, that is.
In Hollywood Vs. The Aliens, researcher Bruce Rux argues that various Intelligence elements on opposite sides of the alien/UFO issue have used Hollywood to disseminate their pro- or anti-alien propaganda. Rux also claims that information from classified reports on alien contact have been leaked to film and TV producers for storylines, and cites the original incarnation of The Outer Limits as an example. The series was the work of one of those great American eccentrics this country is no longer able to produce.
From Salon.com:

(Outer Limits') pedigree was filled with the sort of disregard for convention its content implied. Independent producer and Wellesian whiz kid Leslie Stevens, who created the show as a forum for his oddball notions about science and technology, was variously a Broadway playwright, screenwriter, film director and New Age mystic.

Stevens' dilettantish stamina resulted in so many projects before, during and after "The Outer Limits" -- including a film spoken entirely in Esperanto and a handbook for something called "electronic-social transformation" -- that he gave the term "line producer" a new meaning.

If anyone was connected, Stevens was (which doesn't necessarily he had access to classified UFO information, mind you). He was of that old Brahmin stock that was usurped from power after World War II:

Born in Washington, D.C., Stevens was the son of the late Vice Admiral Leslie C. Stevens, inventor of the arresting gear used to halt carrier-based planes. Next, high school graduation, three years of summer stock and enlistment in the U.S. Army Air Corps (he reached the rank of captain at the age of 20), serving as virtually a one-man production unit in putting on shows to maintain morale.

In 1946, Stevens enrolled at the Yale School of Drama and the next year began a three-year stint with the American Theatre Wing in New York.

The thing about The Outer Limits in its first incarnation (under Stevens and partner Joseph Stefano) is that it's not the standard disclosure/invasion narrative you might expect from the Cold War era, it's about very intimate contact with Other, a contact that takes on a numinous tangibility to anyone experienced in Psychonautics (and takes on interesting undertones if you read between the lines of Stevens' bio).
There's also a very deep and powerful hallucinatory strain in the original Outer Limits, as well as many of the episodes in the second series. And as in "The Galaxy Being" that intimacy comes out of fringe technology, like a modern day version of Dee and Kelley and their angelic visitations. Then again, history always has it that angelic contact is usually a quiet, intimate affair. The rest of us usually only see the footprints.
But both The Outer Limits and The Twilight Zone have a predecessor, One Step Beyond, which set its foot squarely into the world of high weirdness with its "Sacred Mushroom" episode, which featured none other than Andrija Puharich himself. Apaprently the network forbade the episode from being rerun, but the series star John Newland (who underwent what was probably the first televised mushroom trip in history) told John Kenneth Muir it was a hit in the ratings.
Puharich is one of those idealistic fringe science characters who wound up in some very strange and dangerous company, nestling in some of the weirdest corners of the Intelligence community, eventually falling in Uri Geller and Lab-9. Puharich also seems to be one of the many inspirations for Fringe's Walter Bishop character- or maybe the William Bell character, even.
But if you've actually read Puharich's writings, it seems he crossed over into very strange territory. His Geller hagiography is filled his conversations with a VALIS-type orbital AI which filled his mind with the kind of florid religious language common with a lot of the early contactee cults. His view of aliens was not only highly reminiscent of Philip K. Dick, but also of Terence McKenna and John Lilly. All of those men were extremely enthusiastic fans of hallucinogens and other mind altering substances.
And as we've seen here, hallucinogens and alien contact may very well have a very deep pedigree - stretching all the way back to the Mithraic liturgy with its flying disks and tractor beams and all of the rest of it. It's also an integral part of many indigenous American traditions as well.
Note also that Dick, McKenna and Lilly lived and worked not too far from that locus point of human evolution where SRI was exploring remote viewing and other extreme possibilities, IONS was creating a curriculum around transpersonal psychology and other proto-New Age disciplines, and the early hippies were dabbling in an extremely powerful new hallucinogen called LSD-25.
And right in this neighborhood Xerox's PARC was laying the groundwork for personal computing, and various corporate and collegiate concerns were laying the ground for the ARPAnet, the Department of Defense project we now call the Internet.
TO BE CONTINUED

Come take a deeper dive and  enroll at the Secret Sun Institute of Advanced Synchromysticism.