In the first installment of this series- which I had not intended to be a series- we looked at the book and film Altered States, and its references to the work of John C Lilly. The premise of Altered States dealt with a Harvard professor who believed that genetic memory was stored in our DNA, a theory that's gaining wider acceptance these days.
I was reminded of this when re-reading parts of Picknett and Prince's The Stargate Conspiracy, particularly the afterword where the authors speculate on the connection of the ancient gods to shamanic experience, particularly that involving entheogens.
Stargate is not up to par with their other work - the "conspiracy" is entirely circumstantial and speculative, and their critique of AAT and alt-history is numbingly parochial (and a bit petty) - but it tied into my own research on the historical connections of the ancient mystery cults to psychedelic compounds.*

Squint and tell me what that looks like.
I'm certainly not the first to note that ancient encounters with gods or spirit beings have a lot in common with modern alien encounters. There are two opposing camps in dealing with encounter experiences- one has it that these were literal encounters with nuts-and-bolts aliens and another that this was a type of visionary experience poss
ibly connecting to some kind of non-physical entities.
There is, however, a third option.

Which is this- psychoactive compounds may trip something some kind of neural programming in our DNA that connects us to these long-gone alien entities. Who were responsible not only for engineering human intelligence (such as it is), but also creating this parallel program in which we are somehow able to access these genetic memories (or perhaps even some psychic connection to distant entities) through some unknowable, alien, psychic wetware.†
Perhaps AAT and psychedelic research are not mutually exclusive at all. Perhaps in fact they are intimately co-dependent. Look at the Stargate sequence in 2001, look at Jack Kirby's AAT (and prophetic) visions.
Maybe the way to actually access the gods is through a totally new concept of our consciousness. Maybe they are in there waiting for us, as so many esoteric systems have taught. It is my feeling that we need to go beyond entheogens even, since we obviously have not reached the core of this mystery.
Possibly some hybrid technology, including electronics working in conjunction with psychoactive compounds. Like in Altered States.

All of this connects back to my eternal obsession on The X-Files' "Biogenesis/Sixth Extinction" storyline (continued in "Provenance/Providence"), which we'll be seeing retconned into the Transformers universe next month.
That storyline in turn has powerful symbolic connections to the Egyptian mystery traditions, which I've written about in great detail.

Although AAT first crept into The X-Files in "The End," it wouldn't really become explicit until the end of the sixth season. But it wasn't until just the other day that it hit me like a ton of bricks- The "Biogenesis" AAT storyline was immediately proceeded by "Field Trip," a brilliant episode written by Hancock co-author Vince Gilligan in which Mulder and Scully are trapped within a giant fungal organism that uses a hallucinogenic compound like LSD to induce visions in its victims while it consumes them.

The genius of the episode is that the organism repeatedly allows the agents to believe they've escaped, with the fantasy becoming more and more convincing with each repetition. But Mulder and Scully are always able see through the illusion, until you're left at the end wondering if in fact they did escape in the end:

Scully: How did you get here?

Mulder: Aliens brought me back here.

Scully: From North Carolina direct to your apartment door? Mulder, you don't remember getting here, do you? Neither do I.

Mulder: It doesn't change what happened.

Scully: Mulder, why did you knock? This is your apartment. And you don't seem the least bit surprised to find me here. And what about the Schiffs? I mean, if they're alive, as you say, then... then where are they? Where'd they go? Mulder, five minutes ago... this room was filled with people attending your wake.

Scully: Mulder, this is not reality. This is a hallucination. It has to be. And either I am having it, or you are having it or we are having it together.

Mulder: Brought on by what?

Scully: Something that we found in that field, Mulder, because that's where it began. Wild mushroom. Wild mushrooms, Mulder. They were growing there. I stepped on one, and it gave off spores. Several varieties of... of mushrooms are known for their hallucinogenic properties. If... if we inhaled it...

Mulder: Whatever happened to the most logical explanation?

Scully: This is it, Mulder. What if we're still there? If we're still in that cave in North Carolina — that we're not here in this apartment right now?

Scully: No, Mulder, bear with me. I think this is making sense. I think that Angela and Wallace Schiff were digested by that substance that I found all over that field. That they were dissolved and then expelled up out of the ground. What if that substance and this hallucinogen are — are from one and the same organism? Mulder: A giant mushroom?


So have they finally escaped the mushroom when the wheels come off of their reality conception in the following AAT storyline? Or were their brains blown open enough that it attracted the aliens' attention? Did they notice Mulder and Scully noticing them, in other words? 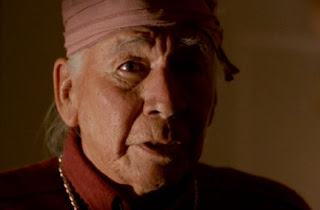 Navajo medicine man Albert Hosteen was a central figure
in Biogenesis/Sixth Extinction
Chris Carter once took part in a Navajo peyote ritual
The genius of it all is that the third chapter "Amor Fati" likewise plays with your head, presenting three separate realities: Mulder's Last Temptation of Christ fantasy in which he and Diana are married and raise a family, apparent consensus reality in which Scully is confronted with the astral projection of a Navajo shaman, and a third dream-reality in which Mulder encounters his future son William on a beach, building a life-size replica of the God-ship out of sand.º

So here we go- as in 2001, as in Indiana Jones, as in Jack Kirby's work - psychic and/or psychedelic visions precede or accompany humanity's encounter with their alien foster parents/genetic engineers.
Pop culture piffle, you say? Perhaps, but just two more pieces of the puzzle of the intimate connection of the frontiers of human consciousness to our very mysterious origins. A puzzle that I believe we need to be a lot more urgent in solving, considering how the wheels seem to be coming off our current paradigms at an alarming rate. 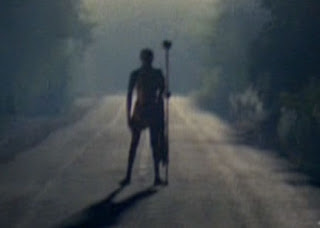 The African Godship took human form as a tribal shaman in "The Sixth Extinction."
Use of mushrooms in ritual was known in the Ivory Coast where the story took place. I'm sure Chris Carter knew this when he wrote the story.

† Perhaps- as Graham Hancock says - there are other means than hallucinogens to access these entities, perhaps through sensory deprivation tanks, extreme physical pain techniques that some cultures have practiced, or in my own case, high fever.
All of these methods seem to be only partially effective- we need to develop more dependable methods to access these mysterious parts of our brain if we're going to realize this potential.
* Or more modern variants- Stargate takes a jaundiced look at Andrija Puharich, who introduced Middle America to the thrills of magic mushrooms on One Step Beyond in the early 60s.
º Of course, you'll never get a straight answer from Chris Carter or Frank Spotnitz that that's what we're seeing, but take my word for it- in Provenance and Providence we see William psychically controlling another God-ship.