ISiS Spreads Her Wings on the Equinox 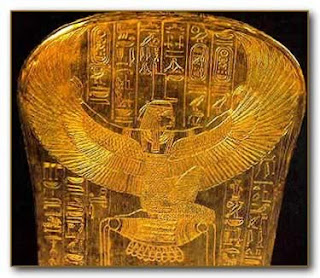 OK, let's hit the bases- Discovery is supposed to launch on Lincoln's birthday, is delayed until the Ides of March, when Caesar became Osiris. It then reaches ISiS on 3/17, accompanied by a strange, glowing orb.
And what does ISiS do on the Equinox?
She spreads her solar wings.

The work was a highlight of shuttle Discovery's mission. Completed 220 miles above Earth, the new panels are the final pair of electricity-generating wings and should boost the amount of science research at the orbiting outpost.

Remember, we just had the Death of Osiris. Today is the Equinox, when the Sun begins to gain strength. Here is why Isis' wings are so important:

Isis is one of the only winged deities in Egyptian myth. She is sometimes representative of the wind, as in the legend of Osiris. One version of the legend tells of Isis using her wings to fill Osiris' mouth and nose with air. - touregypt.net

Ah yes, the newly born sun of Horus, conceived artificially by the Winged Isis. I swear, there are times when I wonder if NAZCA NASA isn't just a billion-dollar cargo cult...
at March 20, 2009