Doing It for the Children 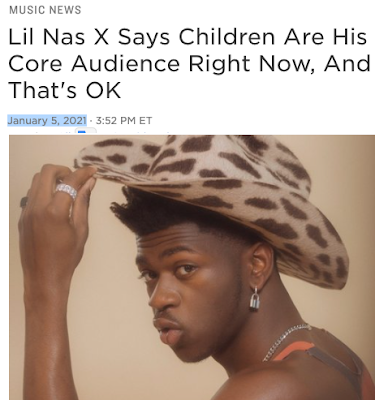 This seems like it's going to be a banner year for Knowles' Second Law. We're not even out of March and already we have the State of California mandating invocations to Aztec gods of human sacrifice. Now we have Lil Nas X enlisted for Cringeianity's (which some call "Satanism") latest effort to wrap their pasty, pudgy little fingers around America's young.

In case you don't know already, Knowles' Second Law is, "The old blood sacrifice state cults will be re-established under the cover of Woke."

And boy, do we have a textbook case of that here. 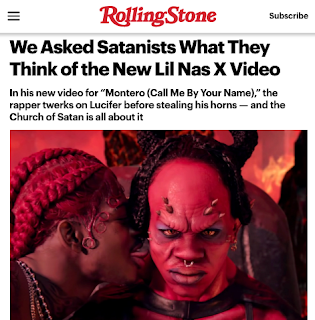 Hence Lil Nas X's transition from America's favorite gay black cowboy to Satan's sex toy. I had to admit I didn't expect Nas to hop aboard this eternal bandwagon to nowhere.

Satanism is stupid, sad, silly and creepy and has had a devil of a time convincing anyone but the most pathetic mall-rats that it was still hip, outlaw and edgy, at least since the days when Howard Stanton Levey was wowing the crowds.

We've been charting the Carnival of Coprophagic Cringe that is modern devil-worship for some time now, including its transition to Wokeitude and the corporate media's Quixotic quest to shill the cringe to the clueless.

Even so, it's probably just a matter of time before Satanists are welcomed into the great circle of Woke protection, after which you'll see the usual suspects like Coke and Gillette incorporate safe-space Satanism into their Super Bowl ads. 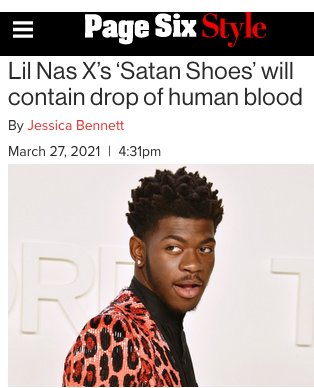 The sad, shriveled husk that was once Rolling Stone is onboard, as one would expect, and have already volunteered their services as Lil Nas' advertising force:

Watching the rapper twerk atop a swole zaddy Satan in the video is redolent with symbolism: as Lil Nas X put it in a press release, it was intended as a nod to homophobes who accuse gay people of going to hell, with the dethroning of Satan as a means of “dismantling the throne of judgment and punishment that has kept many of us from embracing our true selves out of fear.”

Blunt, but effective: claim this bit of satanic evangelism is just a metaphoric blow against the homophobic patriarchy. So if you're uncomfortable with Nas' imagery and messaging it's obviously only because you're a homophobe.

Indeed, the ending of the video, in which Lil Nas X snaps Satan’s neck and puts the horns on his own head to crown himself as a god, is what struck Harris as “the most Satanic part of the video.” “We view ourselves as the most powerful beings in the world. The fact that he crowned himself as Satan — now, that’s Satanic,” he says, noting it’s especially empowering in the context of Lil Nas X making a statement about his own journey as a black gay artist who has faced bigotry.

Count on the Church of Satan to cheer Lil Nas on as he sticks it to the all-powerful Religious Right (well, they're only all-powerful if you fell out of touch with actual reality in 1988). Never mind that the Church's founders and associates were all up to their earlobes in extreme Right-Wing politics (as were every Satanist I'd ever come across IRL).
Cue the whitewash, Rolling Stone intern-person:

Founded in 1966 by Anton LaVey, the Church of Satan does not actually believe in a Christian version of Satan or worship Satan as a deity. Rather, the Church of Satan is more humanistically centered, with members referring to the organization as “the world’s first carnal religion.” “Basically we worship ourselves. We refer to ourselves as I-theists,” says Harris. “We see ourselves as our own god.”

Or as Stanton Howard Levey himself described it, "Ayn Rand with ceremony and ritual added." How exactly this thinking-- endemic amongst the Koch-Ryan Social Darwinist fringe on the Libertarian Right-- was able to rack up Woke points is far beyond this writer's ken.
In fact, this kind of radical individualism is directly antithetical to Leftist philosophy, whether Marxist, Social Democratic or New Deal liberal and all points in between. 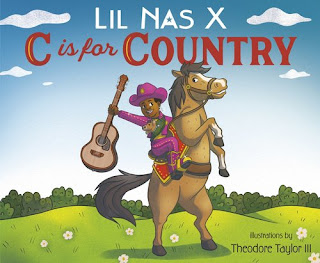 Every rational person realizes the rapidly-imploding rump of Evangelical Christianity is kept around solely to act as a whipping boy for Twitter bluechecks and a boogeyman for NGO grifters to wring cabbage out of senile Democrat sellouts. As well as to inspire the Khmer Woke drones, who comprise the entirety of the writing staff of dying sites like Rolling Stone.com, to spill some shockingly ineffective diversionary rhetoric:

The video has received widespread acclaim on social media for its sumptuous, provocative imagery, as well as the expected condemnation from those on the right accusing Lil Nas X of indoctrinating innocent children into becoming….lap dancers? Classics scholars? Wig enthusiasts? It’s unclear.

You can't begrudge the hyper-privileged idiot children of the overclass for not being read in on the actual program, so let it slide. There are devastating consequences for these stenographers if they ever do start to question the real agenda. Whatever it may at the moment (it's constantly subject to arbitrary change).

Indeed, The New York Times openly demanded the discouragement- if not the prohibition-- of critical thinking a few weeks back. But for those not sucking on a corporate teat, here's the real agenda, in their own words and pictures...

Don't forget the founder of this mysteriously well-financed outfit was deeply involved with the False Memory Syndrome racket, and you've probably heard what the people who started all that were up to. If not, read this.

Lest we forget, the current Satanic Anti-Pope was heavily immersed in extreme Right Wing politics himself, before the orders came down from the C-suites to go "Woke." 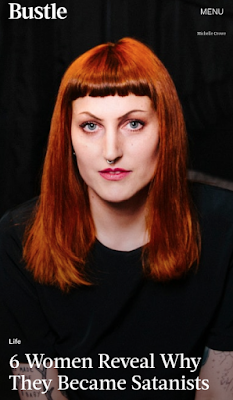 More accurately titled, "6 Satanists
Reveal Why They Became Women"
I doubt Lil Nas X will help the Satanic psyop gain any real traction. It's not the 1960s anymore; if people want to go out and have weird, kinky sex they don't need the blessings of a made-up religion to grant them permission.
Satanism is weird and sad, filled with dumpy misfits with major psychological issues and super-powered levels of cringe. And as Secret Sun readers know, there are a lot more powerful secret sects whose theology isn't based around the loser in a story they don't even believe in in the first place.
However, I would caution Lil Nas that when the demonic spirits he's making goo-goo eyes at want to really fuck you, they will do it on their own timetable. They will fuck up your head, your life and the lives of those around you. And they don't use lube.
I guess this is a lesson every new generation has to relearn.
Teach your children well in the Den of Intrigue.

And don't forget the all-night 90s lotus party over at SHRR...