You might be one of those people who thinks hipsters ruin everything they touch. You might think that 21st century youth culture- once a cauldron of sex, style and subversion- has been neutered and blanderized and sucked dry of meaning, vitality and most of all, menace.

If so, you may want to stop reading now.
Because the Borgcube has turned its attention to that last redoubt of rebellion, Satanism. And it wasn't even a contest; Ol' Scratch got crushed beneath the pulverizing tank-treads of the Snowflake Generation before the bell even rang.
The Satanic Grotto is now officially a safe space:


Can the Satanic Temple Save America?
America’s new Satanists are less about animal sacrifice and more into ‘Paradise Lost’—and they may be our best hope for saving religious freedoms.

Wow, that's quite a claim. Tell me more about this crunchy Satanism...


Let’s be very clear about this: Adherents of the modern Satanic Temple don’t engage in religious or animal sacrifice, and they have no truck with magic, even the kind of low-key supernaturality embraced by some Christian denominations.

Really? Then what's the point?


Satan, to these Satanists, is a literary figure, not a deity—he stands for rationality, for skepticism....

In other words, not actually Satan at all.


...for speaking truth to power, even at great personal cost.

Oh, I'm sure. I'm sure they'll be pissing all over the totalizing neoliberal narrative embraced by the corporate oligarchy, and the political, media and educational establishments. 'Cause, man, they're effin' Satanists and they don't give a shit.

Let's take a look at how these fire-breathing hellions do ritual:


While Blackmore reads, two women and one man, all cloaked, file onto the stage. Each puts on a hood, and they lose the cloaks—except for the hoods, they’re naked, and the optics are a bit Abu Ghraib. A few heavily intoned passages later, Blackmore pushes up their hoods and pours wine into their upturned mouths. All three choke on the wine, which doesn’t make it seem less Abu Ghraib. The reading ends, the crowd shouts, “Hail Satan,” and the three devotees smash the wine glasses they’re holding on the ground.

And that’s it. The ritual, Blackmore said, was written by the Detroit chapter and participation is entirely voluntary; it was “intended to empower guests to challenge arbitrary systems of authority, confront archaic traditions and celebrate the Satanic tradition,” she said. The ritual itself “represented concepts of shame, sexuality and normative religions traditions.”

Wineboarding aside, the modern Satanic Temple is about as non-threatening as a group of devil worshippers can get.

So in other words, snakehandlers are about a million times more metal than these neckbeard Satanists. Hell, your standard-issue Pentecostals are a country-mile wilder than this crowd.


But that’s the point. Satanic Temple chapters across the country have been pushing back against the right-wing religious establishment, providing a vocal counterpoint to religious orthodoxy: like a planned statue of Baphomet next to a Ten Commandments monument at the Oklahoma state Capitol, or the Satanic-themed coloring book being distributed to Florida elementary schools—simple but persistent reminders that freedom of religion applies across the board, that laws or guidelines intended to protect or promulgate right-wing Christianity or to blur the line between church and state convey the same access to other creeds.

Oh, how daring. How forward. How fearless.

Will they do the same with religious groups that it's not socially permissible to dump on? Question answers itself, doesn't it?

That sound you're hearing is the shade of Anton LaVey screaming in despair from the depths of Tartarus.

Disinfo.com has become your one-stop, uh, stop for Hipster Satanist info. When they're not posting Savile-worthy graphics on Twitter, they're filling in their rapidly-contracting readership on how to be a correct neo-Satanist.

The first thing you need to do is actually not be a Satanist:


The biggest take-away from what Satanism really is, is that Satanists do not worship Satan. They don’t even believe he exists. Satan is used more as a symbol of Satanists’ place outside of the boundaries of traditional religion, their rebellion against rigidity, and their distaste for the supernatural.

Yes, because there's nothing supernatural about Satan. It's all literature. La la la.

Let's read more of this nonsense:


In fact, Satanists largely believe that religion can and should be separated from supernatural beliefs, as a religion should provide the framework for how to live a moral life with community and culture divorced from traditional superstitions. Their faith is in the tangible world, a materialistic view rooted in science and critical thinking.

So in other words, the most unhinged Fundamentalist fever dream has come true and the Atheist movement has evolved into Satanism. I have a feeling Richard Dawkins is grinding his teeth right about now.

But these Satanists who don't actually believe in Satan seem a bit confused in their cosmology. Here:


As the Eternal Rebel once defied the tyrant god, we too will rebel.

Defied the tyrant god when? You just said he didn't exist. And will you rebel against real power, real authority, real tyranny?

How about this, Satanists? Let's see what happens if you don't file your taxes this year. Come on, worshippers of the Desolate One. That's a small rebellion. See what happens when you write a big red "FUCK YOU" on your return.

Let's see how rebellious you really are.

Like this rebel, Apolloyn of the 'Church of Satan, Anarchist'. He's so rebellious he misspells 'Apollyon'. Why? Because praise Satan, you bourgeois pigs. That enough "why" for you?:

The individualist holds the view that even relatively moralistic social accountability mechanisms are still coercive breaches of individual sovereignty and indicate a culture of authoritarianism, but the collectivist holds the view that varying degrees of social accountability must be able to guide and uphold cultural standards of socially sustainable behavior to prevent the abuse of individual liberties- abuses which can result in injustices such as entrenched cultural inequalities and social stratification by the generation of extreme wealth and extreme poverty. Neither extreme individualism or extreme collectivism is a functional stand-alone philosophy or model for social organization. A balance must be struck between the two, but not a static balance. There must be flexibility and fluidity and opportunity for adaptation as to use individualist or collectivist tactics to resist authoritarianism. Neither individualism nor collectivism suffices to provide both free individual liberty and collective ethical justice- a diversity of tactics is required to meet the needs of the individual and the collective, and both philosophic positions can simultaneously, symbiotically coexist, complimenting and mutually benefiting each other to create functional, non-hierarchical, antiauthoritarian beings and cultures.

Wow, I actually do feel like I'm in Hell. Well done, Appollooyon.

Don't despair, legions of the Damned One. Your brethren and sisteren are out there, performing abominations and desolations in his infernal name like...like...


Satanists are often natural aestheticians who revel in the grandeur of human artistic, architectural achievements while also often drawn to the idiosyncratic and bizarre that are all too typically misunderstood, feared, and discarded.

With compassion, the Satanic Temple accepts all who are just and compassionate.

They're using IndieGogo to raise money to adopt a highway, which would force the New York State Department of Transportation to erect a sign saying the Satanic Temple was responsible for the upkeep of a stretch of public highway for two years. Every motorist who passes by will see that Satanists are maintaining the highway.

Once approved, the New York Department of Transportation will erect a blue-and-white sign acknowledging The Satanic Temple as the adopters of the designated piece of highway, helping promote a message of Satanic Civic pride and social responsibility.

When reading of the caffeine-free rites of the Neo-Not-Satanists, I can't help but think of the rites of Cybele, the Queen of Heaven in the ancient world, whose blood-frenzied priests would hack these not-Satanists to dogmeat just on account that they were so unspeakably lame.


Her mythical attendants, the Corybantes, were wild, half-demonic beings. Her priests, the Galli, castrated themselves on entering her service. The self-mutilation was justified by the myth that her lover, the fertility god Attis, had emasculated himself under a pine tree, where he bled to death.

At Cybele’s annual festival (March 15–27), a pine tree was cut and brought to her shrine, where it was honoured as a god and adorned with violets considered to have sprung from the blood of Attis.

On March 24, the “Day of Blood,” her chief priest, the archigallus, drew blood from his arms and offered it to her to the music of cymbals, drums, and flutes, while the lower clergy whirled madly and slashed themselves to bespatter the altar and the sacred pine with their blood.

This wasn't some demonic figure, this was the most revered mother goddess in the world, whose fame was such that even the chauvinistic Romans adopted her worship, allowing her to elbow their native Juno off the queenly throne.

The Galli would get so crazed during their rites they'd slice off their junk and throw it through some poor fool's window and keep right on truckin'. And that was on their high holy days. DeSade himself would blush. 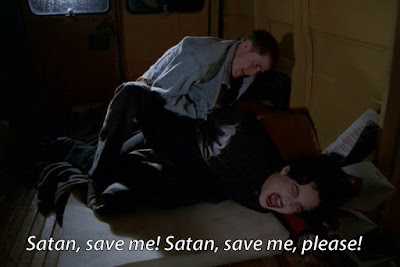 A WORD TO THE UNWISE

There's no telling if this caffeine-free Satanism will quickly dissipate like its antecedents or evolve into something entirely more serious. Whether they choose to admit it, these safe-space Satanists are playing on the supernatural's turf now and the supernatural gets a vote on whether or not it's real, whatever the neo-not-Satanists want to think.
And if you insist on being all rational and smarty-pants about it, just the simple power of suggestion is a lot more potent and insidious than people generally give it credit for being.

You take on the trappings of Satan, you call on his name, you don't get to choose what tags along for the ride. The same can be said for any number of entities, but all the more so for the Prince of Lies.

Spiritual forces don't work on human timetables and they don't follow human rules. If they want to reach down and fuck you sideways but good, they'll do it on their own time. Probably when you least expect it.