My God is Full of Stars: Less than Nero 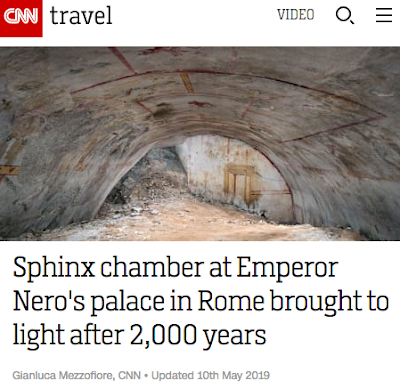 Is this an actual headline or the winning answers to this month's round of Secret Sun Scrabble? Or perhaps just further evidence that there's no one at the helm of the Reality Schooner?

Why is this story-- one in an apparently endless parade of recently-reported archaeological discoveries-- so interesting in the context of the Secret Sun Exegesis? Well, let's look a bit further in the rich and loamy soil of Nero mythology:

After Nero's suicide in AD 68, there was a widespread belief, especially in the eastern provinces, that he was not dead and somehow would return (Suetonius, LVII.1; Tacitus, Histories II.8; Dio, LXVI.19.3). Suetonius relates how court astrologers had predicted Nero's fall but that he would have power in the East (XL.2). - "Nero as the Antichrist"

So far as we know, Nero has not yet returned. But the excavation of his secret sanctum sanctorum is the next best thing, synchronistically-speaking. Apparently, Trajan-- generally considered one of the more virtuous emperors-- filled the thing in after Nero's suicide, so there's an added level of symbolism to be had there as well. 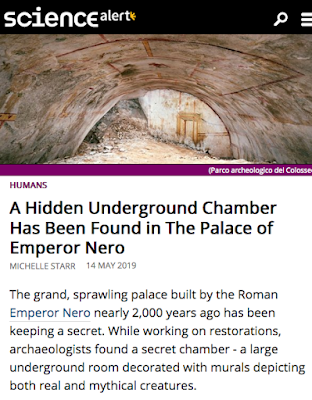 And in addition to this symbolic resurrection, it should be noted that this metaphorical rebirth-- accompanied by a host of chimeras, no less-- is coming up out of the earth, if you will.

Hmmm, why does that sound so familiar?

11 And I beheld another beast coming up out of the earth; and he had two horns like a lamb, and he spake as a dragon.

12 And he exerciseth all the power of the first beast before him, and causeth the earth and them which dwell therein to worship the first beast, whose deadly wound was healed.

13 And he doeth great wonders, so that he maketh fire come down from heaven on the earth in the sight of men, 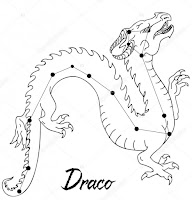 16 And he causeth all, both small and great, rich and poor, free and bond, to receive a mark in their right hand, or in their foreheads:

17 And that no man might buy or sell, save he that had the mark, or the name of the beast, or the number of his name.

18 Here is wisdom. Let him that hath understanding count the number of the beast: for it is the number of a man; and his number is Six hundred threescore and six.

It's also worth noting here that Nero's reign began around the time of the Draconids, just to gild that lily a little bit more.

And scholars generally agree that that infamous 666 is Hebrew gematria for Nero, who again was prophesied to be reborn and take command of Satan's world order:


If the Greek spelling of Nero Caesar (Neron Kaisar) is transliterated into Hebrew (nrwn qsr), the numerical equivalent is 666—although it should be remembered that this number was not represented as a figure but as letters of the alphabet or written in full. In other words, the "number of the beast" was not expressed as "666" (indeed, discrete Arabic numerals would not be invented for another five hundred years) but by the phrase hexakosioi hexekonta hex or the numerical values of the Greek letters themselves, chi (600), xi (60), and stigma (6). 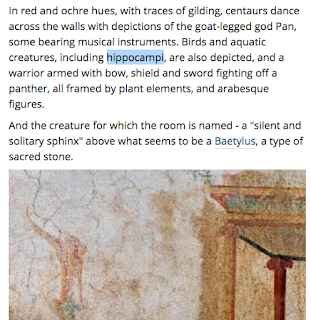 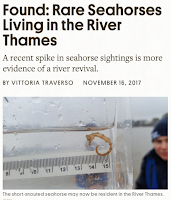 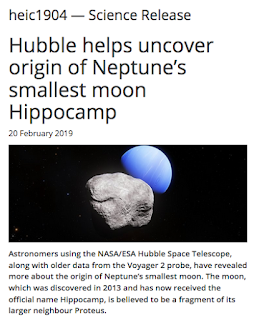 And two days before a certain Sibyl returned to prophesy at the Millennium Dome, that story there.

And three guesses which Roman Emperor minted coins depicting himself as Neptune? 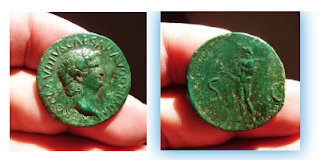 You guessed it: Nero. 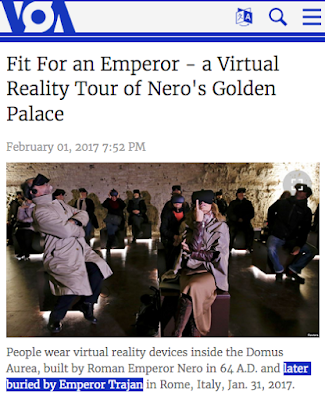 As soon as this Sphinx Chamber story popped up I knew there had to be some link to 2017, specifically early 2017 involved. And sure enough, this Nero Palace project made world headlines then.

Note the dateline here while I take a do a bit of calculation. Don't go anywhere, I'll be right back... 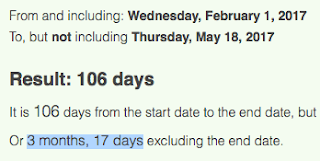 ..OK, 3 months and 17 days from the Nero story going worldwide to the death of Chris Cornell?

Why does "3 months and 17 days" sound so familiar?


"Thus Plutarch tells us that Osiris was murdered on the seventeenth of the month Athyr, and that the Egyptians accordingly observed mournful rites for four days from the seventeenth of Athyr."- Sir James Frazer, The Golden Bough 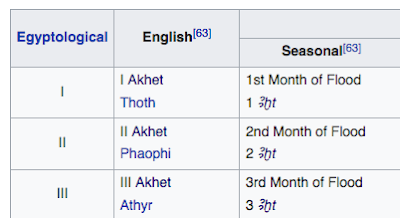 I guess that's why. 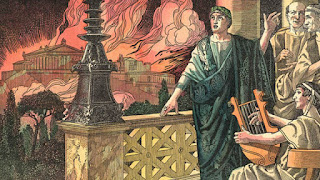 So we've all heard the fables of Nero fiddling while Rome burned, but as it happens that's totally false.

He was playing the lyre, not a violin. Violins hadn't been invented yet.

As it happens some Neronian impostors ran around with lyres as well.


And, indeed, at least three false claimants did present themselves as Nero redivivus (resurrected). The first, who sang and played the cithara or lyre and whose face was similar to that of the dead emperor, appeared the next year but, after persuading some to recognize him, was captured and executed (Tacitus, II.8). Sometime during the reign of Titus (AD 79-81) there was another impostor who appeared in Asia and also sang to the accompaniment of the lyre and looked like Nero but he, too, was exposed (Dio, LXVI.19.3).

Wait; Dragon, Lyre...why does that sound so familiar? 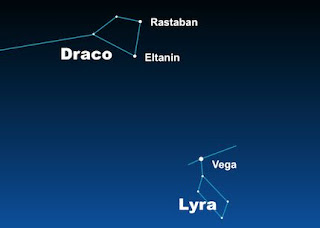 Oh, I guess it's because the head of Draco points directly at Lyra, specifically Vega.

Uh-oh, you know what that means:

Nero also possesses the attributes of the Antichrist in the Sibylline Oracles, a collection of Jewish and Christian apocalyptic verses attributed to the prophecies of the ancient Sibyl, who identifies herself as a native of Babylon (III.786; also Lactatius, Divine Institutes, I.6) and a daughter (or daughter-in-law) of Noah (III.808ff). In Oracle V, which dates to the late first or early second century AD, Nero has become a resurrected and demonic power symbolic of Rome, itself.

"One who has fifty as an initial [the Hebrew letter "N"] will be commander, a terrible snake [the serpent or dragon], breathing out grievous war....But even when he disappears he will be destructive. Then he will return declaring himself equal to God" (V.28ff). Here, Nero is manifested as the Antichrist, "that man of sin [lawlessness]...who opposeth and exalteth himself above all that is called God...shewing himself that he is God" (II Thessalonians II.3-4).

Well, that was then. What about now? I mean, our current Sibyl couldn't possibly have anything to say about Nero, right? I mean, that's just pushing things way too far.

As we saw-- and heard-- way back in the distant days of November 2017, the Sibyl had quite a bit to say about Nero. In fact, the first word in the first chorus in the first song on the first side of Treasure namechecks Nero.

But wait, isn't the first word "Peep" in that song? Sure, on the album version. But in the original version-- which you can hear here-- the first word in the song is "Nero." 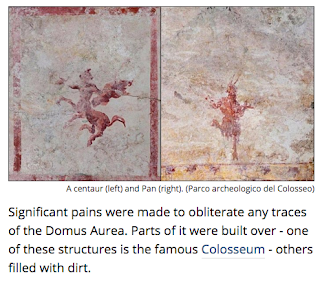 ------------------------
Aside from namechecking Pandora (the mythic source of all evil on Earth) and Persephone (the Queen of Hell), the Sibyl also informs us that Nero is "part-animal." Which most certainly ties in nicely with all the part-animal-part-human chimeras that Nero festooned his underground sex dungeon with. 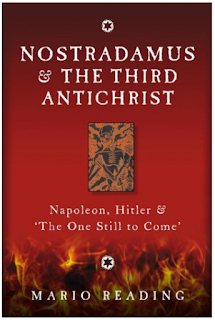 In the bridge, the Sibyl prophesies that, "Three die now/Three go/Through our body," as we discussed after the death of Lil' Peep. This seemed to synch up with the deaths of Cornell, Chester Bennington and Peep. But is there a link to this greater symbolic narrative vis a vis Nero?

The antichrist very soon annihilates the three, twenty-seven years his war will last. The unbelievers are dead, captive, exiled; with blood, human bodies, water and red hail covering the earth.

Remember that NASA announced a new Dragon mission on the day of Peep's death. 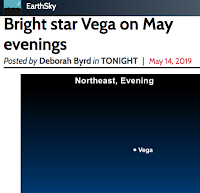 27 should ring a lot of Vega bells with attentive Sunners, so do note that Vega is also seen to rise now in the northern skies. 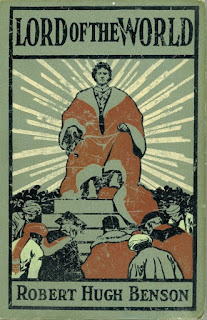 But Our Lady is clearly singing "Nero-Ido" in the choruses of "Ivo," right? What's the connection there?

Well, "Ido" is a created language related to Esperanto. It is constructed by combining words of a number of different languages, exactly as Our Lady customarily did. This process started -- significantly-- on Treasure.

Which reminds us that Esperanto plays into a lot of apocalyptic theories, starting with the novel King of the World. It also plays into theories about a new Tower of Babel, which also brings us back straight into the Sibyl's cavern. 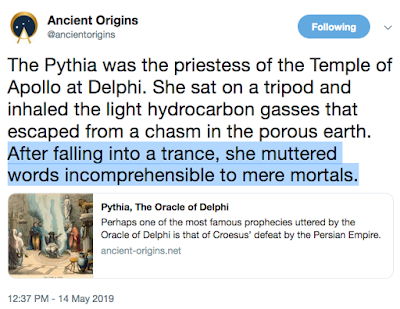 And of course, speaking in strange tongues is a traditional practice of Sibyls and Oracles throughout history. 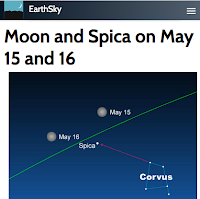 Turning our attention back to the heavens, do note that the current Supermoon conjuncted with Spica, one of the brightest stars in the night sky. 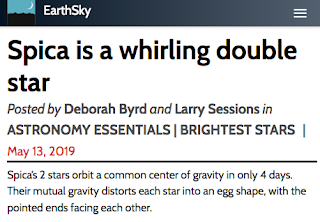 And-- of course-- Spica is actually a Twin star. It's in Virgo, the sun-sign under which the Sibyl first manifested in this earth-world, with its troubles and woes.

Oh, don't forget that an alleged earth-like planet in Virgo was also announced the day of Lil Peep's death. 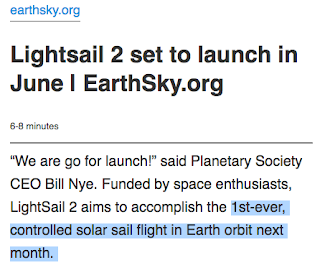 And sure enough, a new solar-powered orbital sail project in reportedly launching next month. Hopefully, Bill Nye's involvement in the project is purely symbolic, on account of him being a raving douchenozzle. 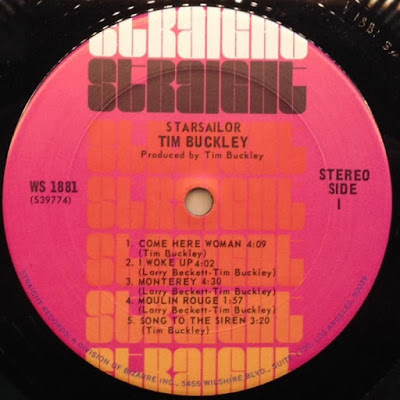 But still, the symbolism should be obvious to the Initiated.


Extra-Credit Sync: Bob Dylan paid homage to 'Nero's Neptune' in "Desolation Row", the 11-minute epic that closes out Highway 61 Revisited, released a day after Our Lady's second birthday.
at May 15, 2019