Heaven Upside Down or Las Vegas: A Tissue of Lies 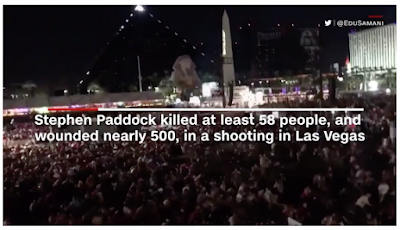 We have here what they call a "teaching moment."

The Las Vegas narrative continues to unravel like an old sweater. I have to admit I haven't been keeping an eye on the cover-up because I stopped believing the official story as soon as I bypassed the mainstream media accounts and looked at the actual, y'know, evidence.

Then the audaciously-blatant ritualism reared its head.

It's safe to say I can't remember a singular event so soaked to the bone with stellar alignments, sympathetic magic and death-cult symbolism. Not even 9/11. 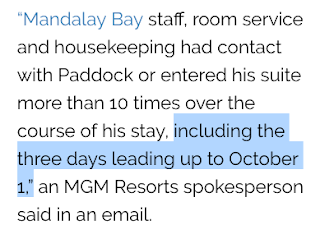 And now another pillar of the mainstream media narrative crumbles into dust. The Las Vegas Review-Journal reported today- reluctantly, I'm sure-- that MGM revealed that Stephen Paddock had extensive contact with Mandalay Bay staff. Also reluctantly.

One of these contacts was with housekeeping the day of the shootings. 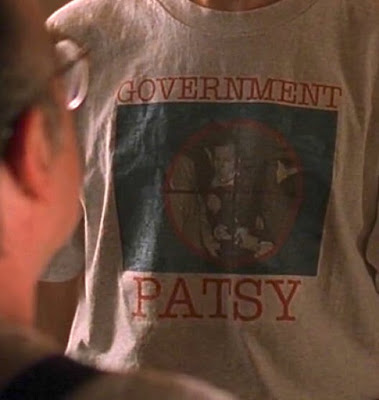 So how did a 64 year-old in shaky health smuggle a sizable arsenal up to a hotel suite and hide it from the staff?

How did he fly under the radar of MGM's not-small army of corporate security after suing a casino a couple years back?

How was he able to handle complicated weaponry that requires a good deal of arm-strength?

None of it makes any sense at all.

But the major media-- following the "scoop" broken by the Mockingbird flagship New York Times-- revealed that Paddock was able to escape detection by refusing housekeeping service, a claim that Steve Wynn- not exactly known for being a wild-eyed conspiranoid -- publicly called bullshit on.

But we saw this crapola repeated again and again... 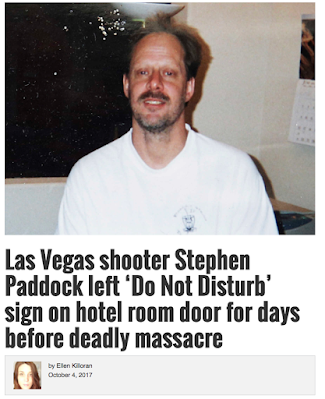 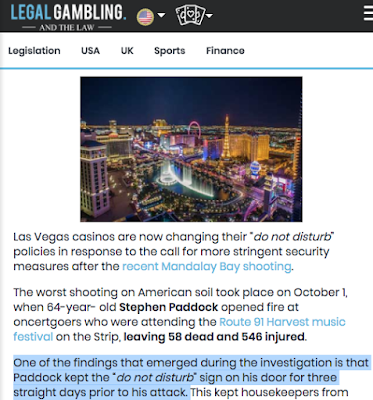 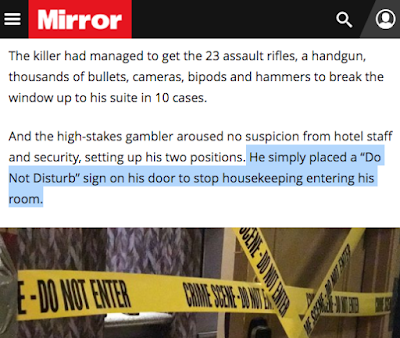 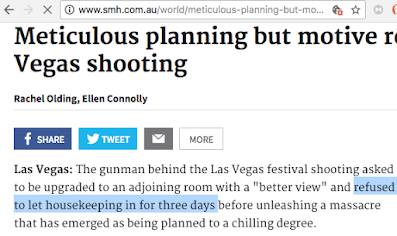 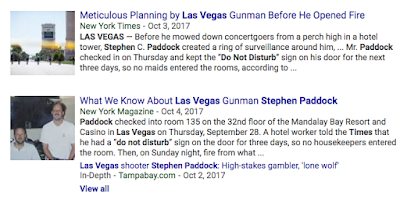 Liars. Every single one of them.

The sad fact is that the coverup in Vegas has been so Chief Wiggum-inept that even some mainstream outlets have begun to walk back some of the bullshit they've been dropping on our heads.

I don't think any of them actually believe what they've been reporting about the entire situation-- well, all for except the dupiest dupes who were ever duped-- but I certainly do think they were hoping they could weaponize the situation for their paymasters.

Of course, we've also been seeing a lot of counter-narratives filtering through alternative news sources, quote-unquote, spinning a narrative of ISIS gunmen and Saudi princes and so on and so forth. I'm not so sure about any of that either, truth to tell.

While it's entirely possible that there've been a lot of Deep State shenanigans tacked onto this little Brady Variety Hour here, I haven't seen anything to convince me that the purpose of this event wasn't ritualistic. 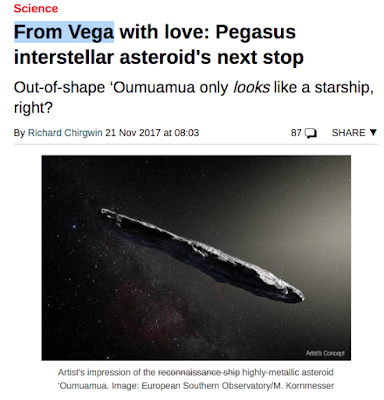 Now a lot of people have rightfully complained that the Vegas posts were a bit jumbled and hard to sort through. It's OK, I'll take the lumps.

But the thing is that there was so much material exploding from every direction it was all I could do just to fish while they were biting and leave the cleaning for later.

But since Our Lady, Queen Dowager of Sybils, had already laid the prophetic groundwork, it didn't take long to spot the dominant patterns here.

Don't ask me why, but all of this seems to have something to do with Vega- "the Falling Eagle"- and the Occultation of Regulus by Venus in 2044.

Now, I have no idea what Vega has to do with Regulus in an astrological or metaphysical context, I just know the symbols keep pointing in that direction.

I have no idea what that thing actually is and I don't really care. It's served its purpose in the ritual cycle we've been looking at here.

A cycle that seems to have started at the MGM Grand on May 18th with the death of Chris "Horned Christ" Cornell and stormed its way through the rest of 2017. And you know the rest of the story. 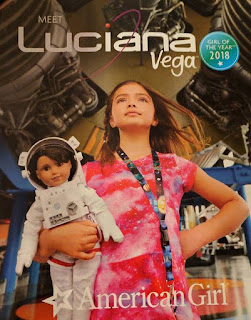 And now we're seeing "Vega" all over the place, including the new Luciana ("Anno Lucis") Heaven or Las Vega rollout, which seems to be a earth-shattering news story for some reason. 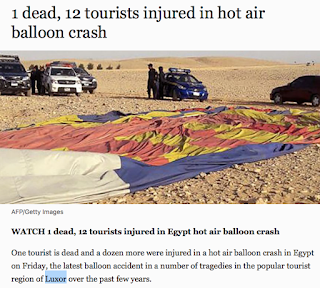 There are also odd little events like this in Luxor, drawing us back to the Luxor Massacres of 1997 and 2017. It could be coincidence or could be someone is really trying to get someone's attention. 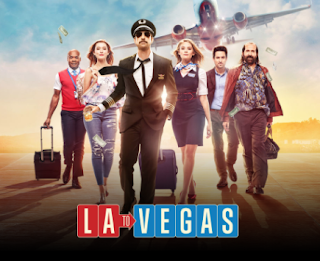 And the Archangels vs. Fallen Angels narrative-- which Our Lady seems to be prophesying in both "Pearly Dew-Drops' Drop" (meaning "those things that have fallen from the Gates of Heaven"- referencing Revelation 21:21, the inverse of the "Beauty and the Beast" alignment of Revelation 12:1-2 of 9/23/17) and "Heaven or Las Vegas"-- keeps popping up into the New Year, hence the oppositional LA (Los Angeles) to Vegas title (and "red-blue" divide logo) of this new high-profile Fox comedy.

And then we saw the CIA's big Disclosure rollout, which leads nowhere else but back to Bigelow's Holy of Holies in Heaven or Las Vegas. All too appropriately, given that this whole dog-n-pony show is a salvo in the "War in Heaven" taking place within the Deep State.

Now as far as Vegas goes, I think there was also some serious master-planning afoot here, not to justify a gun-grab, but to turn America's cold civil war hot. 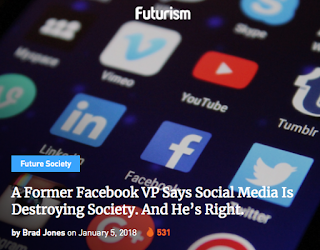 Of course, Voltaire once said "It is dangerous to be right when the government is wrong."

What a dewey-eyed optimist, eh?

The fact is that it's really dangerous to be right when the mindless cheerleaders of a governmental faction are wrong, all the more so in the age of social media. All it takes is the slightest deviation from the dominant narrative for the keyboard commissars to be unleashed on unsuspecting truthseekers, calling up fire and fury from the Abyss with every righteous virtue signal.

Sadly, the spit-and-shoelace cover stories blew up reasonably quickly, and left the Twitter Torquemadas holding the bag. But luckily for them, Trump swooped in and changed the subject by tweeting something especially problematic or other. You can set your watch to it. Maybe he is Batman after all.

All of which adds up to the fact that there's so much mischief being dumped on our heads lately, particularly in the realm of digital technology, that it's hard to catch your breath anymore. The mind-controlling is all out in the open now, because most people don't know and/or don't care.

The assault on personal sovereignty is so unrelenting now, the brainwashing so ubiquitous, that there's only so much you can do. But knowing the truth is still better than the alternative.

Which is why you need to make sure you watch this year's Super Bowl with a codebreaker's gimlet eye. Justin Timberlake is the Halftime headliner and he's dropped this bit of Robo-Apocalypse propaganda just in time. The Archons continue to reap dividends on this particular investment.

You gotta laugh, because this shit is so predictable. But also because this song sounds exactly like an outtake from an old Cabaret Voltaire album.

Well, if you're going to steal, steal from the best. 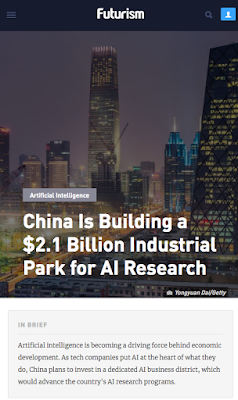 And I'm sure they'll be plenty of intellectual property-theft to go around in the A.I. Age.

China, not generally known for their love of copyrights and trademarks, are building an AI City because of course. Don't know where they are with Smart Cities, but at the same time I don't think I want to know. 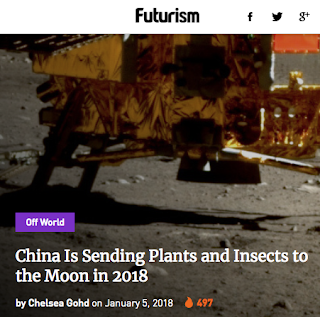 China is also reportedly sending plants and insects to the Moon this year. Because, y'know,  they need to determine if the relentless radiation on Luna is going to instantly fry them or scramble their DNA. I imagine the same question goes for the Van Allen Belt.

Man, it's like no one's ever sent anything living to the Moon or something. I mean, this science is all settled, right? 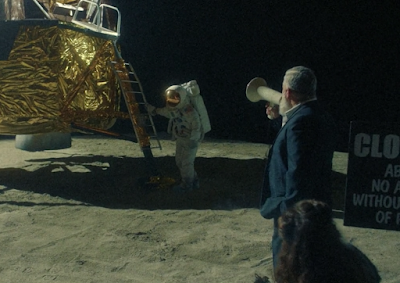 I've heard tell the radiation levels are pretty safe on the soundstages at Area 51, though. Maybe the Chinese should test out their specimens there. Save them a trip. 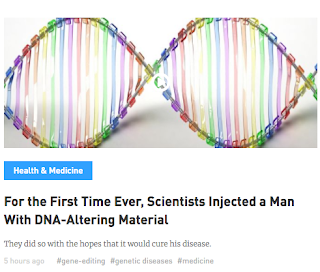 Of course you don't need to go anywhere to get get your genes scrambled. The big Transgenic rollout is on, and it's on now. Why, just think- you could get a flu shot one day and wake up looking like a bubble-eyed dogboy the next. Where do I sign up?

I guess the Vegas are running ahead of schedule. Maybe their ETA has been pushed up.

Makes me wonder if the Microbes are Ready. 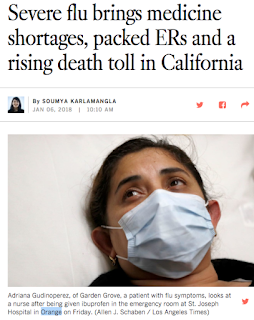 A FB member turned my attention to this disturbing story, calling "My Struggle II" to mind. 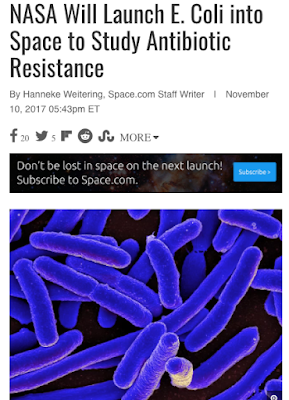 For all you Coincidence Theorists out there, here's a corker for your next Tulsi 2020 fundraising bake sale: remember the tests NASA ran with eColi and antibiotic resistance a few weeks back? 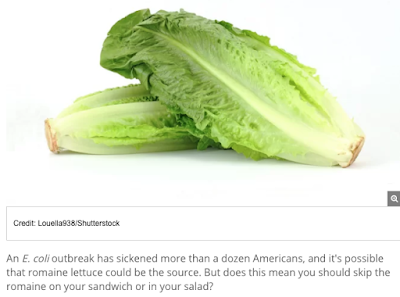 Well as sheer, dumb happenstance would have it, there's been an eColi outbreak. Apparently, Romaine (Roman) Lettuce is the vector here.

Lettuce being the favorite food of the Egyptian god of illness, Set aka Seth aka Typhon.

Well, even so, it sure is strange that 17 people in the US and 17 people in Canada have fallen ill. eh?  17 being the date Set murdered Osiris.

Don't worry about it, it's not like NASA has any interest in ancient Egyptian ritualism or anything.