Keep Me from the Gallows Pole 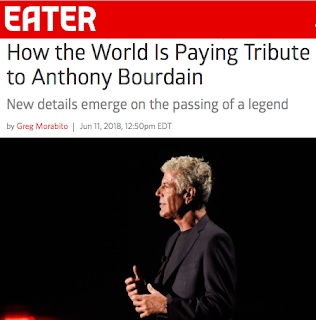 Judging by the avalanche of articles in the past few days you'd think that the Supreme Overlord of the United Galactic Confederation died, not just a prickly but charismatic and well-regarded celebrity chef and TV host.

Anthony Bourdain seems to have been extremely important to certain parties for reasons you and I are not necessarily read in on.
Which is to say that this is one of those events in which we don't so much get a peak behind the curtain as a certain pretense is dropped and we see things how they really are. Only we don't have the right cheat codes so most of us are left scratching our heads while various and sundry rumor mills kick into overdrive. And so it is a man in life becomes tabula rasa in death.

Which is to say it's one of those moments when everyone gets to roll out their favorite hobby horses for fun and profit.

The Q crowd claim this was all predicted in one of their idol's typically-oblique Chan postings. The favorite theory seems to be Bourdain was a kiddie-fiddler (and was mixed up with NXIVM somehow) and took the big sleep to spare himself the humiliation of exposure. Which you'd expect, of course. 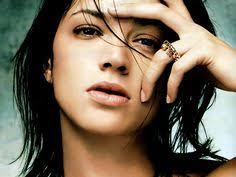 Then there are theories he was offed by Harvey Weinstein's Black Cube thugs because of various statements made on social media and because of his relationship to Italian actress (and prominent Weinstein accuser) Asia Argento. If that were true I think we'd see a lot of these so-called suicides out there. 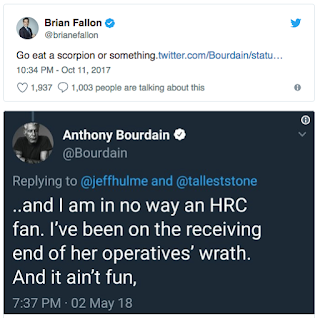 Some say it was because Bourdain pissed off the Clinton coven, others say it was because of his rather vague statements protesting living conditions in Gaza and the West Bank. But my favorite were Alex Jones' sputterings that Bourdain was about to come out and declare his support for Trump!

Now, !'m not going to wade into all the speculation we're hearing about Anthony Bourdain's death. All I can say is that judging by what I've seen of the man he doesn't seem the type to off himself like that.

You never really know a person but I get the vibe this was a man who was having a very good (if not his best) life and thought far too highly of himself to kick it all in the head.

Of course, a lot of folks seem to believe he may have been simply engaging in a bit of the old AEA and enjoyed himself a bit too much. I wonder about this with a lot of these celebrity bathroom hangings, especially in the case of folks who are in recovery. Or in other cases, those pesky bathroom workout mishaps.

Believe you me, a dopamine/-/norepinephrine deprived brain is a ravenous dragon and recovering addicts will often go to extremely extreme lengths to feed that beast. 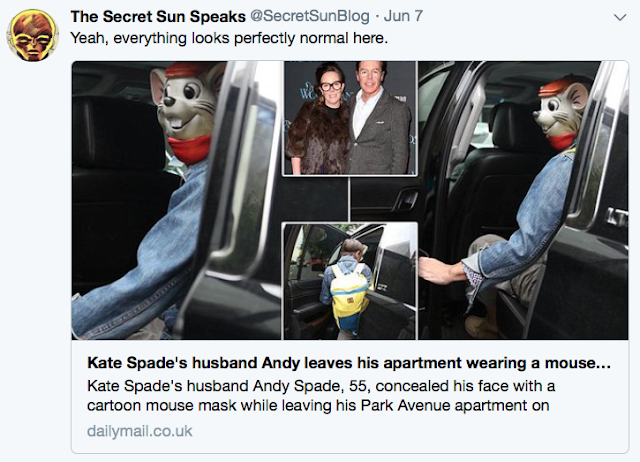 Of course, this follows on the heels of designer Kate Spade's suicide (also by hanging, using a red scarf in this case), which has kicked up a bit more weird-dust. I'm referring specifically to her estranged husband parading around Manhattan in a mouse mask.

Not just any mouse mask but a mask of a character from the old Disney cartoon The Rescuers. Where the hell did he get such a thing? Does he collect old Ben Cooper costumes or something?

There's also the whole thing with the ace of spades being the notorious death card of the Operation Phoenix mind-controlled assassins. I actually met one of them in an illegal basement bar for Marine veterans back in the 90s.

Actually, I'm not sure "met" is the right word, but remind me to tell you the story sometime anyway. 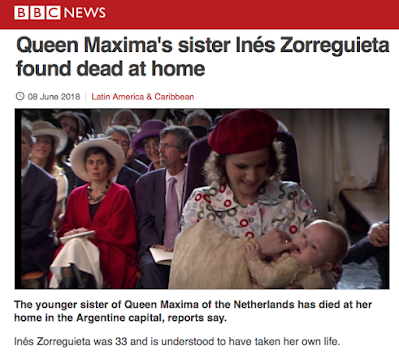 And keeping the Reaper's toll all in the high society family, the sister of Queen Maxima committed suicide at the age of 33 after a long battle with depression. No, Queen Maxima is not a new Game of Thrones character, she's the Queen of the House of Orange, ruling family of the Netherlands. 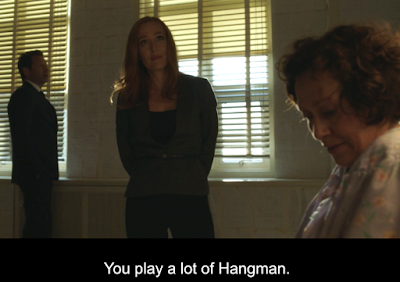 It's not a newflash that suicide has become a genuine epidemic but even so I was surprised to see how many newsworthy suicides of the past two decades were deaths by hanging.

Four of my very favorite musicians-- Chris Cornell, Ian Curtis, Stuart Adamson of Big Country and Chris Acland of Lush sadly checked out that way. As have a whole host of interesting historical figures.

Weird thoughts enter my head all the time. In this case I couldn't help but wonder if there's some kind of hanging cult out there. It could be an AEA cult for all I know but what if was some weird cult- either suicidal or homicidal in intent-- that perhaps based its theology on The Hanging Man Tarot trump or some famous historical martyr who died by hanging.

It's a crazy thought, I know. But that's what The Secret Sun is here for. 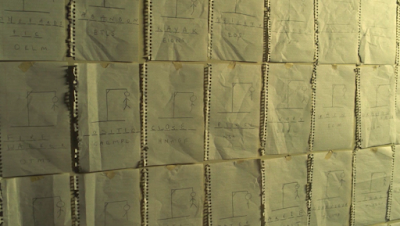 Then there's the likely-final season of The X-Files to contend with. Aside from a grisly, Hollywood-centric Spirit Cooking episode (we'll get to that at a later date) there was also the Hangman episode ("Plus One") that centered around-- you guessed it-- twins.

Chris Carter is maddeningly opaque even in the best of times and I doubt he'll be very forthcoming about exactly what was on his mind while writing this sparkler of a romp. Given that the episode starts off at a rock concert there's a good chance he was processing the hanging deaths of the Siren Saga at the time.

But then it quickly veers to the time-tested Carter Catalog of fixations--doppelgangers, dissociative identity disorder, gender-bending, hospitals, dipwads-- that the signal gets lost. 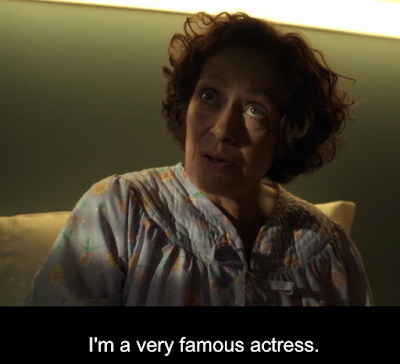 But do note that one of the twins in question claims to be a "very famous actress" named "Little Judy."

We're meant to assume this is delusion on her part but we're also left to wonder which famous actress she is really meant to be and if this Hangman minicult she has going with her twin brother has any basis in reality like the aforementioned Spirit Cooking. 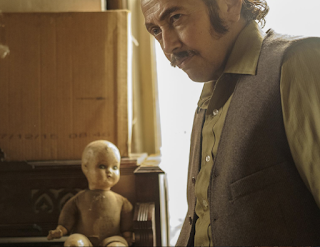 Carter has the same actor--X-Files stalwart Karin Konoval-- play the twins (both of whom have split personalities) and she does a marvelous job. But given Carter's notoriously fractal thinking I can't help but wonder what that baby doll there is supposed to represent. Especially since Chuckie there is an LEO. Maybe we don't want to know.

And maybe I spend too much time in the Conspirasphere but I can't help but glean a Skippy vibe from this little exchange, particularly given that bandaged finger. If you get my meaning. I do have to say Konoval has interesting hands.

There are Carter's usual sideways easter-eggs in the ep, like a reference to the Matriarch Rachel (patron saint of infertile women) a cover of a David Duchovny song (oh, you didn't know about his music career?) Green Day ref with "Dookie," a Planet of the Apes reference in connection to same (Konoval is a featured actor in the new Apes series), a nod to the "cavalier" motif I've seen in other venues (notably National Treasure) and probably a bunch of others I'll pick up a few years from now.

So what I'm trying to say is that I don't believe Carter cooked up this otherwise inexplicable hangman motif on a lark. I think as with all the other episodes there's are sub rosa messages being transmitted here, along with the usual breakaway civilization, engineered pandemics and transhumanist tales told out of school.

This last season of The X-Files seemed to fly under most people's radar but was by far the best batch of X since the mighty eighth season back in the year 2001, aside from the craptastic season opener. And "Plus One" confirmed my suspicions that the title "My Struggle" refers to Carter's struggle writing a storyline he thought he put to bed in aforementioned S8. 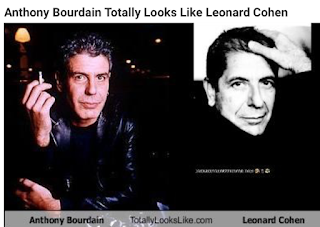 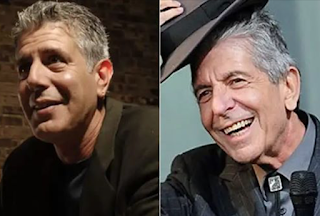 It can't help but be noticed that Anthony Bourdain bore an uncanny resemblance to a certain Canuckistani tunesmith who wrote a certain ditty that a certain doomed troubadour who broke the tender heart of a certain angelic-vessel made famous.

A song that was studiously ignored by the world in its initial release but has since become a standard thanks in large part to aforementioned doomed troubadour's interpretation.

And a song that linked two victims of the hangman's noose in terrible purpose, one of whom was an intimate friend of aforementioned doomed-troubadour. 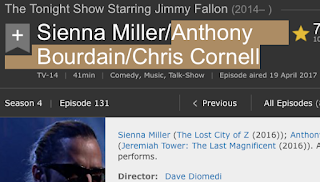 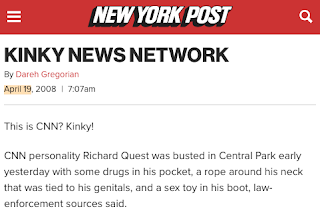 April 19th is also the day the news broke that CNN anchor Richard Quest was found in Central Park with a pockets filled with crank and a rope tied around his neck and his junk. And you wonder why I think there might be some weird hanging cult out there?

Don't go thinking it has to be controlled by the Illuminists or whatever. I'd say the most dangerous cults are the ones that don't answer to anybody. 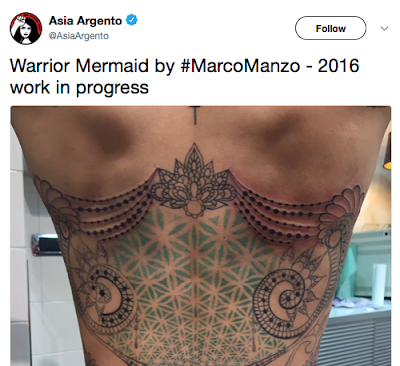 Of course with these kinds of connections there has to be a Siren connection somewhere and it's a doozy. A reader pointed out Asia Argento has a massive tattoo called the "Warrior Mermaid" on her back. Because of course. 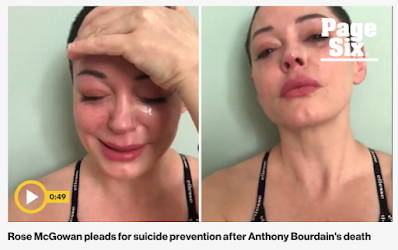 And since the dreaded magic words "Harvey Weinstein " automatically summon the avenging angel-slash-aspiring Fraserling Rose McGowan we learn that Hollywood's least-favorite harpy flew to be by Argento's side, even though reports have it the Italian siren had already been making time with a new beau.

Even so we got a video message from Rose to the departed Bourdain, which seems quite heartfelt in intent even if it's a bit Chris Crocker in execution.

Well, you know what they say with all the symbol-smoke there has to be some need-fire. Meaning Our Lady has to have foreseen some of this, if not indirectly. And without fail, we get some signifier-synchery.

The ill-fated female duo of this tragic triumvirate share an usual name in common- Beatrix. In Ines' case this comes in the form of Princess Beatrix, who stepped down a few years back and now runs the Apples of Orange NGO. 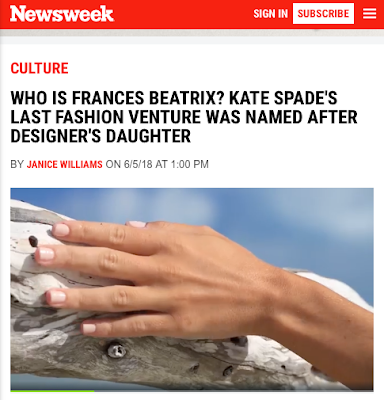 And after selling her interest in her nominal fashion powerhouse, Mrs. Spade named her new venture after her daughter, Frances Beatrix. 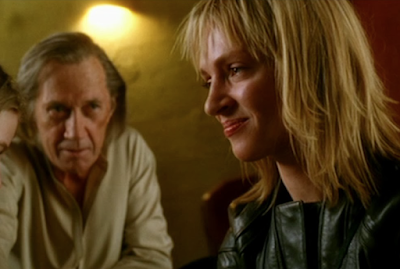 Oddly enough, Beatrix is the character name of "the Bride" in the Kill Bill movies, in which noted Weinstein accuser Uma Thurman is set against the titular Bill, played by hangman's victim David Carradine. That's a good three signifiers tied into this triptych. Because never-endingness never ends.

And of course, the haunting waltz "Beatrix" is the third song following "Ivo" and "Lorelei" on the indelible 1984 testament, Treasure, which was re-released on audiophile vinyl back in March. 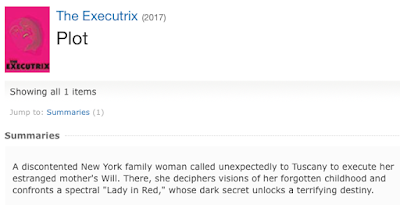 And weirdly enough, Asia Argento played the title role in the recent supernatural thriller The Executrix.

We saw the uncanny connections between "Ivo" and the doomed emo-rapper Lil' Peep. And of course the sublime "Lorelei" is the Sibyl channeling the Siren yet again, promising her suitors that they're "covered by the sacred fire" but when they come to her, they come to her "broke."

I'd say the same applies to both the Siren and the Sibyl. Which will you choose, the wide or the narrow gate?
Note: "Beatrix" is also featured in the 2015 Brazilian film Califórnia