NXIVM: Buckle Up and Enjoy the Ride. 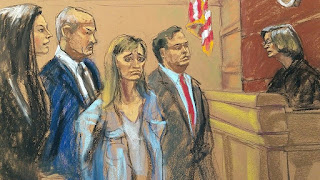 So this NXIVM sex cult story just keeps getting uglier and weirder. Allison Mack, the co-star of the long-running Smallville TV series has been thrown to the wolves and is reportedly angling for a plea deal.
And with good reason, it seems:

In legal documents, the United States Attorney writes that the defendant, aka Allison Mack, “is charged with using force, fraud, and coercion to recruit and maintain DOS slaves, and instructing those slaves to engage in sexual acts with Raniere, among other assignments. The defendant aggressively recruited DOS slaves and required those slaves to recruit slaves of their own.” 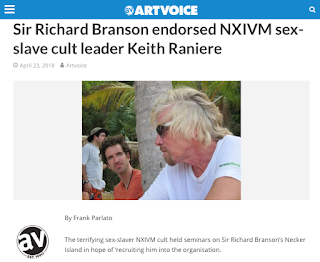 This thing is threatening to bring all kinds of jetset types into its tarpit. Reports have it that they rented out Richard Branson's private island-- which looks to be problematic considering his new big venture is a swingers' cruise ship. Y'know, the one with the Siren mascot.

And it looks like the Bronfman sisters are still involved, contrary to reports they'd fallen out with NXIVM. In fact, they've taken the reins of the sex-cult while the rest of the leadership is cooling their heels in the pokey. 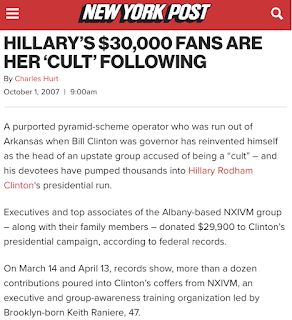 And speaking of the War in Heaven, it's starting to look as if this bust might have some connection to the Beltway civil war that is the defining story of our times. Keep a close eye on this one. An all-seeing eye, if you prefer. 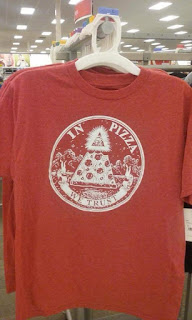 And here's this totally-unrelated and not-at-all-connected example of master-class trolling seen by a FB member at Target. Apparently this thing is acutally Orange, though it looks red. File this with those recent Taco Belluminati commercials.

Yeah, it's always fun until someone is ritually sacrificed. Or so my dear old grandma used to say. 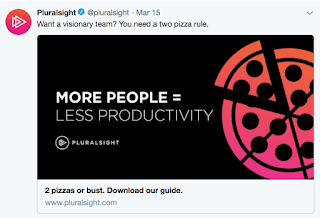 Here's another complete and total non-sequituur for you that has absolutely nothing to do with anything else at all so why do you ask? They just really like pizza, it seems. Large pizza, personal pan pizza, stuffed-crust pizza.
Y'know, the works. Allegedly. 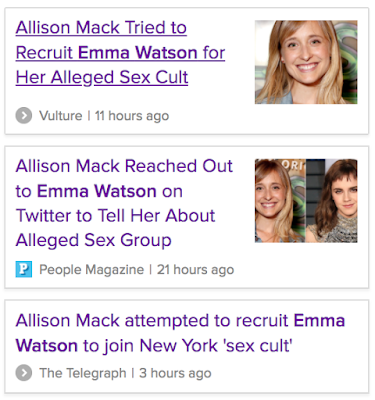 And right on schedule, the Secret Sun adjacency wells up in the froth.

Because it came out today that Allison Mack tried to recruit none other than Hermione Von Pearly Dewdrop-Granger herself.

And the name-game is strong with this one; Allison is a variant of Alice, as in Alice in Wonderland and Alice Through the Looking Glass. Allison Mack played Chloe Sullivan on Smallville, Chloe originally being an epithet of Demeter.

Mack is also the surname of the late John Mack, who some would argue was a cult leader unto himself with his work on alien abduction reports.

Allison/Alice of course also reminds us of the chilling track, "Alice," which appropriately enough was originally recorded for Stealing Beauty and used to better effect in The Lovely Bones. More prophecy from the Sibyl? Maybe yes, maybe no.
A tantalizing sync either way. 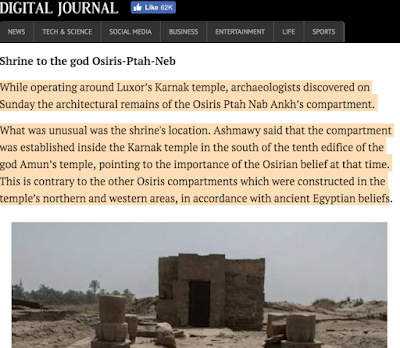 Speaking of ancient Egypt not really being ancient at all but being current events, some things that were once hidden are being unveiled. In this case the Shrine to Osiris-Ptah-Neb, who some of you probably know better as... 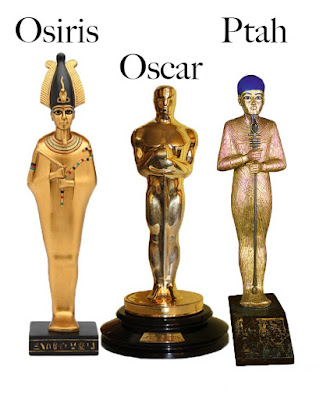 OK, so you'll all be shocked to discover that the world didn't end and Nibiru didn't collide with the Earth on the 18th or the 23rd. I know, I know. It's hard to believe but true. 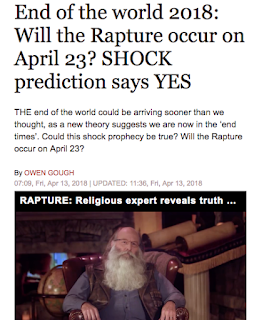 Oh, no one's getting off that easy, Jasper. Buckle up and enjoy the ride. 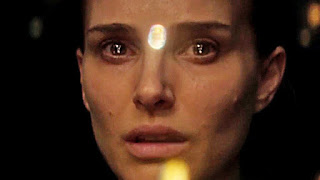 Speaking of the end of the world, I missed Annihilation when it was in the theaters. I really need to see this one, given it appears to be more evidence of either clandestine worship of the Sibyl or the Sibyl haunting the dreams and visions of today's entertainment tastemakers, Philip K Dick-style. Or Lovecraft-style, if that floats your boat.

Do note Natalie Portman ("Holy Birth of the Gatekeeper") manifesting weird energy in her irises, a look which should ring a bell for regular masochists readers. 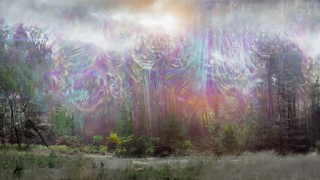 If you haven't seen it already, the film centers on the Shimmer, which is some kind of spooky energy-field thingy. Which, by a sheer, random quantum error in the causality-matrix, not only resembles the covers of pretty much every Cocteau Twins record ever released (give or take)... 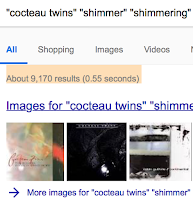 ...is not only named after one of the--if not the-- primary adjectives used to describe their music...

...it was written and directed by one Alex Garland. 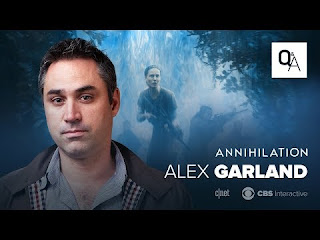 No shitting. Really. Plus, the film's storyline hinges on the theme of Twins.

Having peeked at the plot of this film, I'm not sure I find these particular associations terribly reassuring. But there's so much of all that going around these days, isn't there?

I have to admit I have a bit of a hard time with Natalie Portman movies. There's the weird pedo-vibe she rose to fame on, but she also seemed to steal my beloved Winona's thunder, which I can never forgive her for. Especially seeing as the deleterious effect as it had on my precious 'Nonnie.

Who, I might add, is a massive Cocteau Twins fan. As far as I know, Natalie is not. To the Devil with her! 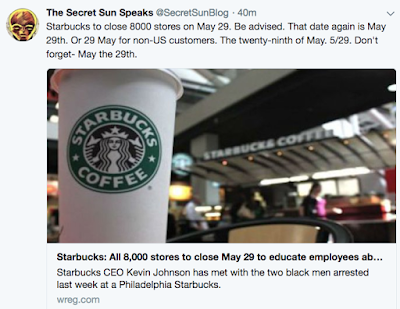 You've probably heard by now about the racial controversy over two black men being arrested (ostensibly for loitering) at a Starbucks in Philadelphia, causing a major protest and boycott.

Starbucks is an extremely liberal and politically-active corporation (former CEO Howard Schultz is mulling a presidential run) so stores have been ordered closed on May 29th for diversity training.

Huh. Why does that sound so familiar? Can someone give me a hand here? 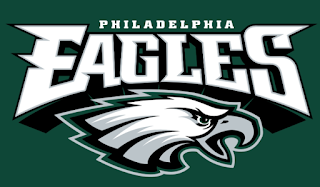 Interesting sync this all starting in Philadelphia, seeing as how Starbucks and the Philae-Delphi Vegas use the same color scheme and all. Let's hope for a speedy and satisfactory resolution for all involved. 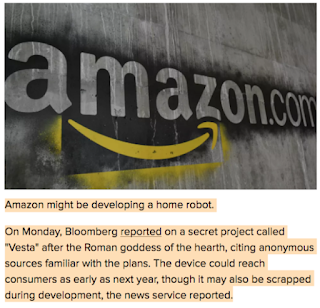 Don't look now but Amazon is planning a new robot for your home.
This one's called Vesta, after the Roman goddess. It goes with Echo (named after the ancient Nymph) and Alexa, totally not named at all after Edward Alexander Crowley. 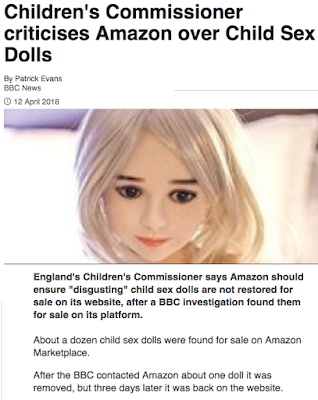 I'm not sure what the creepy child sex doll is named, however. I think that's from a third-party seller. Not to worry, though. Amazon is very big on social justice, if their subsidiary The Washington Post is any indication. 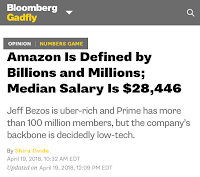 Social justice, yeah. Economic justice? Not so much. Of course the two never seem to go together, do they? Why do you think that might be? Weird. 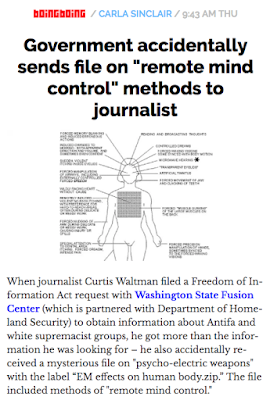 A lot of folks wrote me about this story and asked my opinion on the ostensible leak here. Some folks have also been asking what I think of the Waffle House shooter, Travis Reinking.

Reinking, who was taken into custody Monday afternoon, told a Secret Service officer at the northeast entrance that he was a "sovereign citizen" who had a "right to inspect the grounds," according to a Metropolitan Police Department incident report dated July 7, 2017.

Reinking's brush with law enforcement in the nation's capital was not his first. Documents obtained by CNN affiliate WBBM from the sheriff's office in Tazewell County, Illinois, suggest a troubling pattern involving guns and what one police report described as "delusional" behavior."

"Travis is hostile toward police and does not recognize police authority. Travis also possesses several firearms," an officer said in a May 2016 incident report.

At the time, Reinking's parents had called emergency services to report their son believed pop star Taylor Swift was stalking him, and he had made comments about killing himself.

Most recently, police said, he visited a car dealership in the Nashville suburb of Brentwood last week and somehow obtained a key fob for a BMW without providing identification.

"Somehow." Hey, it happens. We all make mistakes.

It goes on, but you can probably guess the rest. 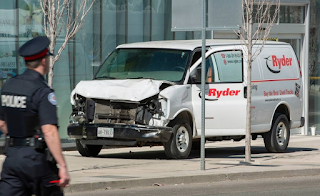 And sadly, we had another killing spree, this time in Toronto. A 25 year-old "special needs" student mowed down dozens of innocent citizens with a Ryder rental truck, despite associates describing a person well into the far side of the Spectrum, who many said didn't even know how to drive a car, or even operate a steering wheel.

But another classmate had a different memory from Thornlea. Reza Fakhteh told National Post that he went to school with Minassian for two years at Thornlea. He said Minassian was a special education student who didn’t socialize and just meowed at people.

“I never heard him speak beyond meowing at people,” he said. “His movements were erratic and just strange overall. He acted like a cat in every way.”

Fakhteh said he was shocked that the driver was Minassian. “The guy I remember from high school definitely wouldn’t be driving,” he said.

Despite this, he was accepted into the Canadian Air Force but washed out early.

New rule: if you wash out of the armed services, you automatically lose your driving privileges.

After the van lurched to a stop, the driver jumped out of the van, made a number of odd jerking motions and begged the police to kill him. 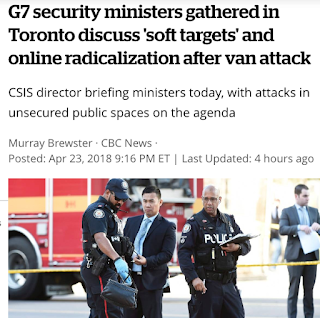 It was a horrific and senseless attack. But luckily, the security ministers of the G7 countries were meeting just a few blocks away, and just so happened to be discussing responses to these very types of events.

Sometimes you get the bear. Hooray for the good guys!