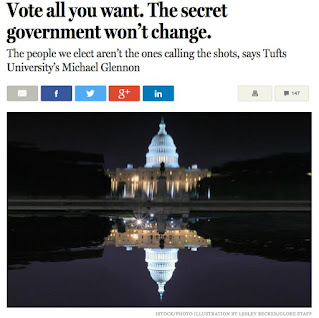 This blog really found its voice during the 2008 Presidential Elections when I noticed that the two major candidates running for office seemed to incorporating the hieroglyph for Sirius in their campaign logos.

Or more accurately, the Stairway to Sirius.
This didn't exist in a vacuum, there were all kinds of emanations surrounding the elections and their aftermath, including the "major issue" of the dog with his "star quality" and the Sirius Star and all the rest of it.
There's also the strange habit of Obama to make 17-minute speeches, which has continued throughout his time in office, as well as his strange fixation on Hanuman, the Hindu god.* Symbolic gold, until I got tired of playing the game.

I haven't paid any attention to the election this year because I don't actually believe that it's going to change anything. Indeed, we saw a rare moment of candor in The Boston Globe, of all places, informing us that no matter who you elect the agenda at the top remains the same.

And we're seeing such tidal forces at work in the global economy, it's impossible to take the old bromides seriously anymore anyway.

Certainly we're seeing the Republican Party now in a state of civil war since the rank-and-file finally realized that their victories in the 2010 and 2014 Elections meant nothing at all, that the Administration and Congressional leaders are going to do what they are told to do by the think-tanks and the corporate chieftains who will set them up for life when they leave office. 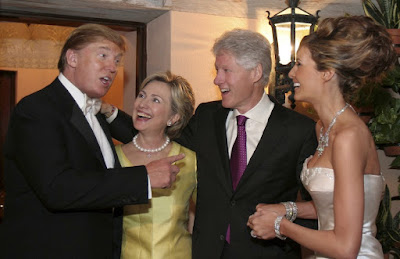 When it comes to the issues that really effect your life and your future, the Democrats and Republicans are all on one side. And it's not yours.

Democratic voters don't realize the fix is in because they see their man in the White House as some kind of victory, despite massive downticket Democrat losses over the past seven years. And despite the fact that the only real difference between Obama and his predecessor is the rhetoric and a few social issues (most of which he "evolved" on due to outside pressure).

They are certainly identical on the major issues that matter to the Bilderberg and Davos crowds.

True, Obama has unleashed the genii of identity politics since his re-election in an attempt to keep the base mobilized, kept in its bottle since Bill Clinton was first elected. Or so the story goes.

Perhaps instead the goal is to keep the party's coalition fragmented and paranoid and therefore dependent on the party itself. The Republicans have been doing this for decades, after all. Or maybe the agenda is to prevent the anti-establishment Left and the libertarian Right from coalescing into a united front against the Establishment, something you saw some movement on during the depths of the economic crisis.

Either way, the result of all of this manipulation is an extremely divided, stressed-out and angry country. Not to mention a country experiencing rising crime and poverty and all the rest. What that might ultimately be leading to is an open question.

Let me just say, though, that when it comes to parsing out hidden agendas, I tend to adjudge intention by result. If you get my meaning.

But what do the symbols tell us?

That there's so little real import to this election seems evident by the campaign logos, which are the dreariest, tiredest and least imaginative batch I've seen in years. And the ones that aren't dreary are frickin' weird.

Now, bear this in mind; entire companies can meet their year's payroll just on the sale of one logo. With some corporate jobs, sometimes much more than that.

And this is a painstaking process. Nothing is accidental or arbitrary in the design of a campaign logo, you can have designers and consultants working out literally every micrometer of detail.

So what the hell is this?

Hillary Clinton's ugly and bizarre logo, with its right-oriented arrow and its twin blue pillars. You didn't need to be a Truther to get a strange flashback from this extremely odd imagery.

The 9/11 link actually became a story in the mainstream press, leading one to wonder just what the hell is this logo trying to say. Something following Knowles' First Law, surely.

I don't know. But I do know that this is exactly the kind of provocation that the Clintons have specialized in since they burst onto the national scene.

Then there's the Clintons' close family friend, Donald Trump, who we're supposed to believe is "taking on the Establishment" he's been a very, very happy and comfortable part of his entire life. As you might expect, his logo is about him, featuring his profile.

But what the hell is that red stripe on his head? His combover? Pay attention to that because it pops up again...

...here, in Bernie Sanders' logo, an otherwise dull affair. But what are those stripes supposed to be?

The obvious inference is stripes (from a flag), but they look more like earthworms. Or better yet, serpents.


SIDEBAR: Now be aware that in graphic design you're essentially dealing with signals, not explicit images. Hillary's arrow doesn't actually look like an arrow, it's a drastic simplification, an abstracted idea of an arrow. Same goes with stars, flames and all the other icons we are looking at. Bear that in mind when looking at these odd "stripes."

It's an odd design, to be certain. And what did Ian Fleming say about three times? Because sure enough, the same odd "stripe" shape pops up again…

That's three of the leading candidates with the same weird (and ugly) form. Cruz's logo (a flame and a Cruz, or cross?) is even stranger and more disturbing than Hillary's...

...because you have those weird, snake-looking stripes and then…

…the All-Seeing Eye, or some kind of eye, with a pentagram as the pupil.

It doesn't look very friendly, does it?

I don't know what to make of this. This all could be some odd kind of serpent symbolism, I'm not sure yet. I need more data. Just remember, nothing in politics is accidental.

Which is a good time to point out that we also see a suggestion of the pentagram-eye in Carly Fiorina's (awful) logo. 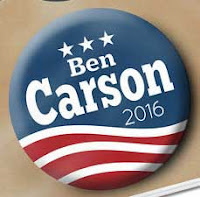 Ben Carson, conversely, uses normal stripes (with squared ends) in an otherwise pedestrian effort. (I'll spare you O'Malley's and Jeb's and the rest).

Now, you could go out on a limb and see the negative space in the stripes and say that's the White Nile and the Belt of Orion, but...

The flame logo shows up again in Rand Paul's crappy logo, but given his father's, um, associations… 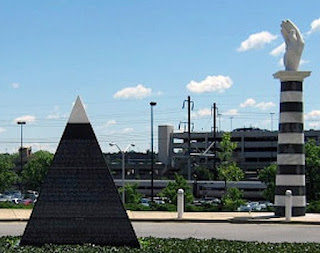 …the "flame" kind of more reminds me of the open hand column we see here. And that "flame" form is actually the shape animators are taught to use to draw hands.

Marco Rubio's logo is…odd. Not exactly eye-catching. And putting his name in lowercase only adds to the impression he's a lightweight who's not ready for prime time.

But I'm far more interested in his name "Marco Antonio" (with all the connotations to Cleopatra and the rest) and to Mars the Red (Ruby) Planet itself. Keep an eye on this one.

And "A New American Century?" Yeah, definitely keep an eye on this one.

Me, I'll keep an eye on the logos once the tickets are decided after the conventions. In the meantime, I'm trying not to pay any attention to this whole charade, it seriously depresses the shit out of me.

It might depress me even more if I believed any of it, for a single minute. 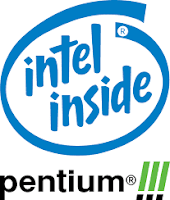 UPDATE: Reader Escal-Hathor reminds of the snake-like Pentium logo and its possible etymological links to serpents (SerPentium, or 'Place of Snakes'). That's even quite Ouroboros-like, don't you think? 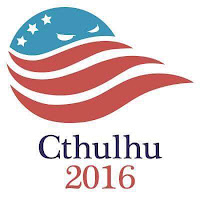 UPDATE: I rest my case.

PAPERBACK
KINDLE
* As I predicted way back when we've seen a major push on the space front, something that I saw emerge in the symbolism during the election. As readers are well aware, the space program is full of its own high initiate symbolism. They don't even try to disguise it anymore.

Despite some of the theories you might hear I think the space program is actually an attempt to keep the global economy moving, an economy which is beginning to face major headwinds on a macro-scale.

† It may be no accident that so much of the identity politic agitation is taking place within Humanities and social sciences programs in Universities that have been in constant danger of losing funding and that some- particularly those who would prefer colleges to be retooled as training facilities for MBA and STEM majors- would love to eliminate altogether. Impossible, you say?

Japan- an entire country- is already doing it.


With state legislatures starting to take a hard look now at speech codes and "safe spaces" and so on, "give 'em enough rope" may not be just the title of a Clash album.
at February 03, 2016