Sucking in the Seventies

Longtime TV fixture Gary Collins pierced the veil and left this mortal coil at the age of 74.
Collins' career is too long and twisting to detail here, but he entered the Secret Sun Hall of Fame when he starred (with Darren McGavin, no less) in the Solar foundational text Hangar 18 (which you read about in depth here), and was no stranger to other genre roles as well.
By far the most notable of these was The Sixth Sense, which by some dint of chance was not a Dan Curtis production. This show- about a parapsychological researcher- actually ran for two seasons in the early 70s, when such things were all the rage in pop culture.

It's hard for young people-- who've been so relentlessly mediated and catered to for the past three decades-- to understand how much of a relief shows like The Night Stalker or The Six Million Dollar Man or movies like Planet of the Apes or even Logan's Run were back in the 70s.

It's like this;  lukewarm water isn't appealing to most people in normal circumstances, but to a man trapped in a bleak wasteland, dying of thirst, it's a revelation from the gods.

And so it was for the occasional half-hearted stab that Hollywood took at sci-fi or superheroes in the 70s. After Star Wars it would all change forever, but for those of us trapped in that no man's land of oppressive blandness, any break from the routine was cause for celebration. 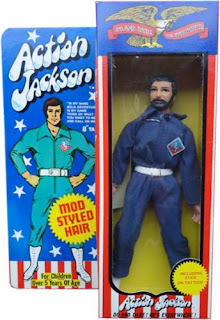 "Mod Styled Hair"- is that the best they can do?
The latchkey generation of the 70s were keenly aware that everything was better for kids in the 50s and 60s, and the Internet has done a great job in preserving the crappy cartoons, TV shows and toys that aging schlockmeisters forced down our throats.
Shows like The Sixth Sense or Night Gallery were designed for adults, which made them all the more appealing, even if they don't hold up in any objective way today.

It's very hard for me to nostalgic about a lot of things from the 70s. It was a lot like today-- an era marked by decline and diminished expectations. But there were glimmers of resistance, seeds that would sprout with punk rock and alt.comix and independent film.

My fear is that the avalanche of sheer product today makes such a second Renaissance unlikely. But no one expected any of it the first time around, so keep your ears to the ground.
Support those people whose work you value. You can't expect them to stick around if you don't.