These days it’s easy to forget what an astonishing feat of craftsmanship the first Matrix film is, given how it over-exposed and over-discussed it was.
The technical, thematic and visual force The Matrix packed has yet to be equaled, especially by its own utterly forgettable sequels. The film is so complete, that any sequel seems redundant (just like the first Star Wars).

It's also tempting not to write about the film at all. Maybe too much has been said about it already. But there are deeper strands of subtext in the film that might explain its incredible success, and more importantly its resonance.
It has to be said that The Matrix is derivative in the extreme, and is certainly not the least bit subtle or sophisticated in its use of religious symbolism. But sometimes you have to be direct when trying to communicate ideas to an audience that is totally uninitiated in any esoteric type of thinking.
In this, The Matrix had learned the lessons of the commercial failure of Dark City. 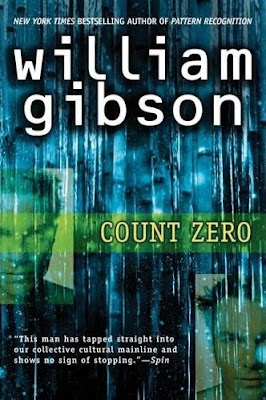 The Matrix is like most landmark sci-fi films in that it borrows (well, steals) motifs from a number of different sources. And it borrows from them promiscuously.
The title itself, as well as the hip attitude and many of its essential concepts, is borrowed from William Gibson’s groundbreaking - and thoroughly Gnostic - "Sprawl Trilogy" of novels; Neuromancer (1984), Count Zero (1986) and Mona Lisa Overdrive (1988). 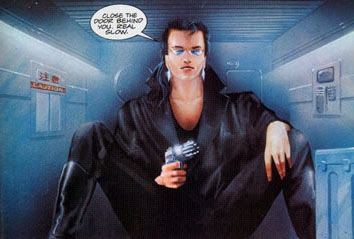 The Sprawl Trilogy posited a world of metastasizing corporations, samurai computer hackers, insidious designer drugs and lethal female assassins. ‘Trinity’ from the Matrix films is clearly modeled on Molly Millions (aka "Sally Shears"), the femme fatale of the Gibson novels. 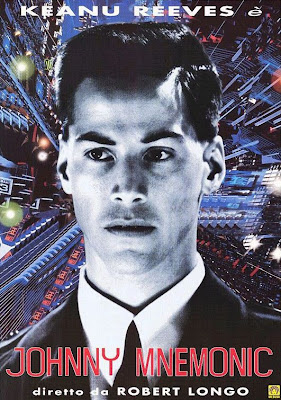 Keanu Reeves, star of the Matrix films, also played the protagonist in a 1995 film based on one Gibson’s short stories Johnny Mnemonic (included in Gibson’s crucial collection of short stories, Burning Chrome), which The Matrix borrowed liberally from as well. Gibson presented his own Matrix, a so-called ‘consensual hallucination’ of endlessly streaming bits of data.
But his Matrix was merely a dry run for the Gnostic slave state the Matrix films posited. And where the Sprawl novels posit a moral void, the first Matrix film offers a clear-cut dualist cosmology with good guys and bad guys.

The Wachowski Brothers also tapped heavily into the rich veins of America’s dream factory: comic books. The bullet-time and other freeze-frame effects of the film were inspired by the absolute control of time the reader experiences when reading a comic book. The Matrix was originally composed in a comic book-like volume of storyboards, and everything that was put on the screen was meticulously designed in illustrated form first. 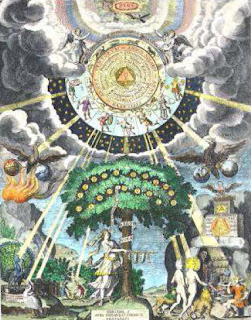 Then there's the Gnosticism, which has been covered extensively by other writers. As most of you know, the word gnosis is greek for knowledge, specifically sacred knowledge and the term "Gnostic" has been used to describe a whole host of marginal, disparate and idiosyncratic groups who rose in late antiquity and gave the nascent Church a run for its money before being ground under Rome's boot-heel in the Fourth Century.

What did the Gnostics know? Well, according to certain texts, the Gnostics knew that the world was an illusion, created by an evil deity to trap and enslave the divine essence located in the human soul. 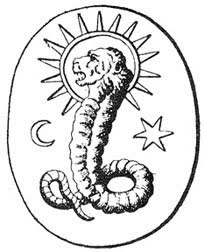 Gnostic cosmology is often incredibly confusing and inconsistent, but the basic gist of it is that there is an invisible and unknowable God who has split himself into a series of ‘Emanations’, expressed as lesser entities who interact with the knowable world. Fragments of these Emanations exist in the human soul. 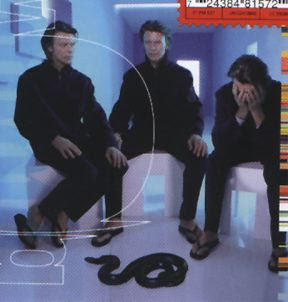 Bowie does the Demiurge in 1999, with Christ as Serpent

Yaldabaoth, one of the lesser emanations from the Unknown God, created the known world as an inferior imitation of the Divine Order to imprison those fragments. The Apocryphon or Secret Book of John explains the nature of this impostor:


“Now the archon who is weak has three names. The first name is Yaltabaoth, the second is Saklas, and the third is Sammael. And he is impious in his arrogance which is in him. For he said, "I am God and there is no other God beside me," for he is ignorant of his strength, the place from which he had come.... “

It doesn’t take an Elaine Pagels to figure out who Yaldabaoth is. The more cultivated and learned practitioners of Gnosticism were horrified by the reductionist simplicity of the more conventional Christian sects.
Another Gnostic text, the Hypostasis of the Archons (the Archons made an appearance in the original Star Trek series, which we discussed in an earlier AstroGnostic post) elaborates on the nature of this threefold god:


"Opening his eyes he saw a vast quantity of matter without limit; and he became arrogant, saying, `It is I who am God, and there is none other apart from me.'
"When he said this, he sinned against the entirety. And a voice came forth from above the realm of absolute power, saying, `You are mistaken, Samael' - which is, 'god of the blind.'”

The role of the Messiah or Christ in Gnostic theology is also somewhat different than that in orthodox Christianity. The condemned state of humanity is to live in ignorance of its divine essence, and the role of Christ is to awaken the human soul to its true nature.
This is a more purely spiritual and speculative view of Christ, as opposed to the orthodox view which was primarily concerned with instilling obedience (‘faith’ in religious terminology is a synonym for "obedience") and offering hopes of the salvation of the human soul from the fires of Hell. 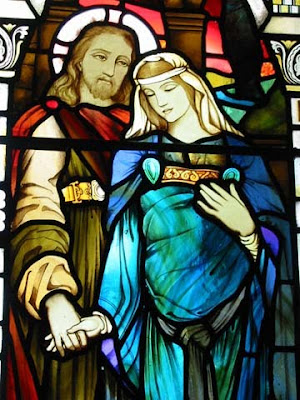 The Gnostics -- or rather certain Gnostic sects -- took a less dim view of the female than did their orthodox brethren, many of whom blissfully castrated themselves in order to resist the demonic wiles of the subhuman female.
The Gnostic Gospel of Philip celebrated Mary Magdalene as the tef-hotre or ‘yoke partner’ of Christ, leading to a grand tradition of esoteric speculation that culminated in The Da Vinci Code. The Gnostics also recognized the divinity of Sophia, the feminine aspect of God.

Just as in the seminal Gnostic text of self-discovery, The Hymn of the Pearl, the plot of The Matrix concerns Thomas Anderson’s realization of his true and unique divine nature. The name “Thomas Anderson” has several layers of meaning. "Thomas Didymus" is the credited author of the most famous Gnostic text, The Gospel of Thomas.
"Thomas Anderson" translates into ‘the Twin of the Son of Man’, referring to the Gnostic tenet that Thomas was Jesus’ twin brother. Some Bible scholars have speculated that the origin of the ‘Doubting Thomas’ in the Gospel stories was inserted as a critique of the Gnostics’ skepticism about a bodily resurrection.

Christ symbology is all over The Matrix. Morpheus is a John the Baptist figure, a "forerunner" preaching the coming of "the One." There's a Judas character in "Cypher," (read: Lu-cifer, a lift from Angel Heart) who betrays Morpheus and his troupe to the ‘Agents.’ Neo dies and is resurrected.
But this Christ is an explicitly Gnostic one - his mission is to bring knowledge to the souls trapped in the Matrix. The identity of the Gnostic trinity is symbolized by the ever present threes. Trinity is either Mary Magdalene or Sophia (or Isis), depending on which Gnostic trinity you subscribe to. 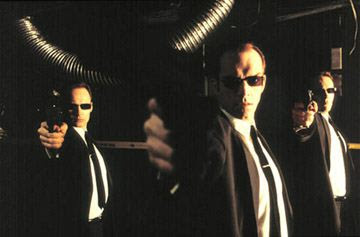 Then there are the Agents, the AI components who act as the secret police of the Matrix. They have been identified as the archons of Yaldaboath, when they are more akin to the three personalities of the Demiurge: Yaldabaoth himself, Saklas and Samael.
And the opaque Ray Charles-styled dark glasses the Agents wear recall the fact that Samael is ‘the god of the blind’. In this context the ever -present police SWAT teams stand in for the more anonymous archons of Gnostic mythology.

There's also a parallel sun god metatext to The Matrix as well. When Neo and Morpheus discuss the prophecy of the Oracle (herself a solar character, in that the oracles were servants of Apollo in ancient times and Apollo was identified as the sun god in late antiquity) at her apartment, between them is a clock in the shape of the sun.
And when Neo rebounds in the subway station (subways, again) in his battle with Agent Smith the word “Sol” appears on the wall behind him. The Trinity of Morpheus, Trinity and Neo can also be seen as Osiris, Isis and Horus, since Neo plays a distinctly childlike, novitiate role to Morpheus and Trinity through most of the first film.
Throw in Tank the communications man as Thoth and Cypher as Set, if you like. Cypher betrays his comrades at a dinner table, vaguely recalling Set's murder of Osiris at a dinner party.

But by and large, the symbology of the Matrix films is largely based in Gnosticism and similar esoteric traditions. The checkerboard floor of the building where Neo first meets Morpheus brings to mind Masonic iconography, signaling Neo’s ‘initiation’.
And the sequels throw in a grab-bag of characters with names taken from mythology and esotericism like "Kali," "Persephone," "Seraph" and "Merovignian" (and let’s not forget that in the sequels, Neo most resembles that esoteric Messiah, Kal-El of Krypton). 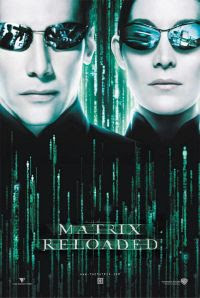 Lastly, The Matrix's vision of differs greatly from Dark City. In their real world incarnations, the heroes and heroines of The Matrix are androgynes. Males and females dress the same and act the same. When incarnated in the Matrix, their outfits and attitudes are decadent and fetishistic. There's a distinct air of gender transgression, which is essentially shoved down your throat in the two sequels.
Dark City, on the other hand, presents distinct gender signifiers. And the 1940’s setting of the film reveals an inherent conservatism vis a vis sexual identity. The women are lush and fertile and the men are stoic and aggressive.

And then there's the alien question. And therein lies the crux of the matter....