The Pink Star of the Sea

As I said on William Henry's show in December (and here as well) we need to be on the lookout for water symbolism this year, as well as mermaid/mermen and other symbols associated with Sirius in esoteric lore. The recent Serious Mysteries posts explored these memes in depth, particularly as they relate to James Cameron, who is obviously very deeply obsessed with both aliens and the oceans (and Gus Grissom, strangely enough).
Well, much to my surprise the Grammy Awards turned out to be a motherlode of these 2010 memes. Though Cousin Beyonce and Lady GorGon went out of their way to steal everyone's attention (as usual), it was Pink who came through with the hardcore symbolic booty. And this wasn't the kind of garbled, rudimentary, pseudo-Masonic tedium that's being tossed lately by artists like Jay-Z or Rihanna- no, this was something else entirely...

The performance opened with the stage done up in a deep, blue, undulating oceanic motif, almost as if Pink were under water (like a mermaid). As she made her entrance, a bright light flashed like a star, as if she were emerging from it.

Secret Sun readers are well familiar with the star Sirius and its identification with Isis, and that visual juxtaposition reminds us of Isis' title as the Stella Maris, or 'Star of the Sea', which sailors used to navigate by in ancient times. Later this role was assumed by the Virgin Mary, as we see in this dramatic illustration.

As she emerged, we saw that Pink was dressed in a white robe and veil, reminiscent of the one Beyonce wore when standing at the foot of the Sphinx at Giza (which brings us back again to Isis). Note also that in Greece and Rome, Isis had absorbed Hathor's sistrum and her role as patroness of music, appropriately enough. 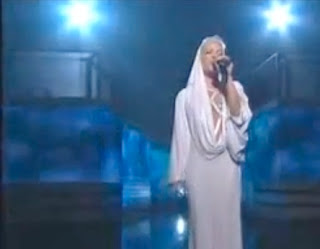 We then see two lights above Pink. As every Secret Sun reader is sick of hearing, Sirius is a binary star system. But this may also have a double meaning, as all potent symbols do.

But it's right here that we get our money shot- the goddess descending the Stairway from Sirius. It doesn't get any more explicit than that.

And here it is again- the Stairway, the Blazing Star, the goddess. Note that the three stage lights correspond to the Sun, Sirius and the Moon in the tracing board iconography. But we're just getting started... 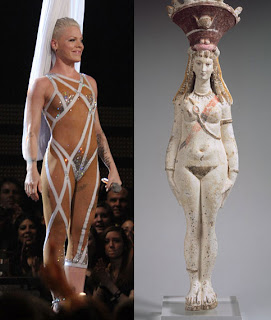 ...because Pink then removes her veil and her robe, revealing a costume not only highly reminiscent of Leeloo in the The Fifth Element, but also of this famous statue of Isis-Venus. (break out your "Isis Unveiled" jokes now). Of course, Pink is also distinctly androgynous which may earn some extra symbolism points as well.

Pink is then suspended from midair with three other women, where she continues to sing while performing some pretty damn impressive acrobatics. But what part could the three women be playing in this apparent symbolic drama?
According to Wikipedia, "The Belt of Orion" constellation in Latin America is called as Las Tres Marías (The Three Marys). I suspected as much. But if that's so what's the connection with the three women at the top and Pink suspended beneath them? Note again the cluster of lights behind this performance- again we see a kind of star effect...

...is it meant to correspond to this? Wiki again:

Orion is very useful as an aid to locating other stars. By extending the line of the Belt southeastward, Sirius can be found...additionally, Rigel is part of the Winter Circle. Sirius and Procyon, which may be located from Orion by tracing lines, also are points in both the Winter Triangle and the Circle.

Note how the angle linking Orion to Sirius corresponds to the shape of the strap (or belt if you prefer) which is holding Pink aloft.

Here's the grand finale- Pink is drenched then pulled back into the air where she spins and sprays the audience like some kind of baptism. Given the obvious water symbolism and the Isis parallels, I couldn't help but think back to this...

...from December 17. Remember that red granite pylon from the Temple of Isis? This was part of the big finale of the Stairway to Sirius, Revisited series, which kicked off with the aerial anomaly over Norway. Kind of brings everything full circle, doesn't it? What are the odds? Funny thing about Egyptian red granite, though- it's more what you'd call...pink. 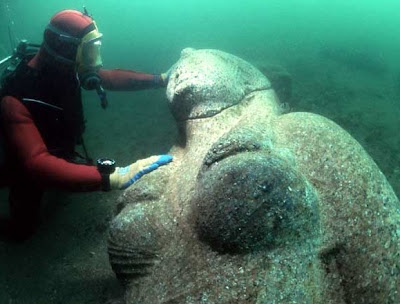 I won't sit here and tell you what it all means. But I will go back to what I said after the 2008 Election, when we first began exploring this enigmatic iconography. After looking at the history of secret societies, I confessed that years of studying some of the well-known Masonic and occult texts had left me completely baffled as to what all the fuss was about:

I've been studying this dilemma for several years and none of the secrets these groups supposedly kept were even all that interesting, never mind profound (Morals and Dogma will bore you to the point where you pray for the sweet release of death). I'm not sure exactly when it happened, but at some point in the last year or two I became convinced that there had to be something else. Perhaps something lost in time that we could only figure out by reading the symbols and metaphors these groups couched their secrets in.