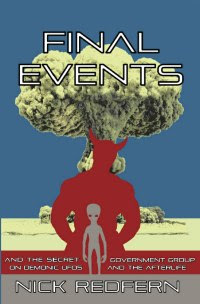 Author and journalist Nick Redfern has a new book out called Final Events that's guaranteed to shake people up. It deals with a powerful secret society within the Intelligence community created with the intention of establishing a Christian Reconstructionist surveillance state. For what purpose?
Well... in order to protect America from demonic UFO pilots. We're seeing a lot of this kind of thinking floating around out there. It may in fact become the dominant view of UFOs, given that Hollywood is preparing a huge slate of UFO invasion films. Is someone trying to tell us something or is this a reaction to the Recession and fears about illegal immigration? Or is there a plan to fake some kind of devastating alien invasion in order to unite the world around a common enemy?
I interviewed Nick to get the scoop... 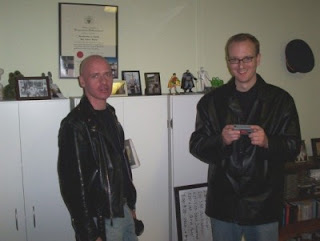 Nick and the late Mac Tonnies
Tell us about your book. What's the basic premise?

Basically speaking, Final Events is a study of a think-tank group comprised of personnel from within the U.S. Government, military and intelligence community that has existed in stealth for a surprisingly long time. The group believes that while the UFO issue is a very real one, they do not believe it has anything to do with literal extraterrestrials.

Rather, the group - which calls itself the Collins Elite - concludes that the "aliens" are, in reality, literal demonic entities that are trying to seduce us with a false lure of supposed alien technology, and to - quite literally - steal and farm our souls. The group claim to have discovered evidence that these demonic entities - that seem to utilize a weird combination of advanced technology and archaic rite and ritual - derive a form of "energy sustenance" from the human soul or life force. 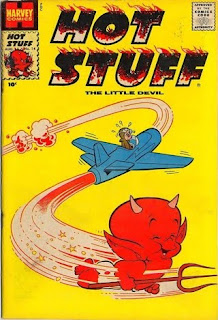 In other words, they don't want to land on the White House lawn and help us, nor do they want to destroy us. Rather, they want to maintain the herd, and upon our physical deaths, extract the human life-force as sustenance.

The Collins Elite believes this has been going on since the dawning of civilization and that the ET motif is the latest in a long line of deceptive images they have used, and that in the past have included gods, angels, Jinns, fairies, goblins, etc etc.

Since we're talking "demons" here is it safe to assume these are Christians?

Yes, they are all Christians, or became Christians after they came to accept the theory. As for their positions, we're largely talking about people in the Intelligence community - and a lot from the DIA in particular - and also Air Force Intelligence.

There are a few of the older, original members left, but today, they have allegedly placed their research on-hold, due to a belief that a final battle between good and evil is drawing near, and that the UFO presence will be finally be revealed for what they believe it to be.

The most ominous thing is that there appear to be some people attached to the group who believe that to save the US from what they perceive as a Satanic threat, the US should be placed under a near-martial law situation with the nation ruled by an iron-fist that adheres to Old Testament style teachings and beliefs. I expand greatly on all this in the book.

How did they think they could fight these demons?

Their belief is that deep belief in, and acceptance of, the Christian God can literally keep the demons at bay. This is why some of the group have contemplated what should be unthinkable: forcefully changing the entire U.S. mindset to that of an Old Testament nature, as part of what I personally conclude is a misguided plan on their part to try and save our souls.

Did these people have any contact with people like John Todd or did they figure this out on their own?

They appear to have come to their conclusions in a number of ways, such as personal/group research; consulting old religious texts; drawing parallels between UFO encounters and other paranormal encounters; and clandestinely interviewing UFO witnesses very occasionally.

Can you give us a couple examples of how they acted on these beliefs?

They instigated a large-scale study of Jack Parsons and Aleister Crowley in the late 1940s and early 1950s, believing them as being partly responsible for the ushering in of the UFO mystery in 1947 - Parsons via his "door-opening" issues and Crowley, after he contacted the alien-like LAM. The CE also established a large-scale investigation of the alien abduction phenomenon in the early 1980s that reportedly was of great interest to the Reagan Administration.

Can you name anyone involved in the group or anyone who's been involved with them?

Yes, all the people I interviewed are named in the book and speaking on the record. However, they are not big-names or known names. Rather, they are people who spent their careers working behind the shadows in the world of Intelligence and espionage.

What put you on to this particular story?

I was put onto this story by a Nebraska-based priest named Ray Boeche, who has an interest in UFOs and who worked with MUFON. Ray told me in an extensive interview undertaken nearly 4 years ago that in 1991 he had been clandestinely approached by people in the Department of Defense who were aware of this alleged demonic deception of a UFO nature and were very concerned by its implications, and of the fact that the Government was dabbling into these areas, and perhaps even anticipating some sort of Faustian pact with them. That set me on the trail that ultimately led to the research and writing of the book.

How do we square conspiracy theories that the gov't is promoting belief in "UFO space brothers" with this group?

Bear in mind that this is simply one think-tank group in the Government that has this belief. It's entirely possible - in fact, probable - that they are other groups that have come to different conclusions about the nature of the UFO phenomenon. In other words, the CE does not secretly speak for the U.S. Government on the UFO issue.

But it does appear to speak for certain players in the Government that may wish to do away with the Constitution and turn the U.S. into a closed-doors society, surveillance-driven, and to create a populace indoctrinated by Old Testament teachings.

Did they have any conflicts with other factions in the government?

Yes, the way it was worded to me is that there is something like a silent conflict going on in today's intelligence world - with some pushing for this Old Testament indoctrination of - and control of - the populace, with other factions wishing to bring us back from the brink and restore things to genuine freedom.

Is it safe to assume that the popularity of the "UFO/Demon" meme that we see out there is thanks to the CE?

Some of it may be, yes, via subtle pushes of data here and there. However, I think that it may be the case that many people who adhere to this view do so because they have come to their own conclusions, but without third-party influence.

Disturbing stuff. If I were a more cynical kind of guy, I might almost think that this was all just another psyops group assigned to create pretexts for overthrowing the Republic. But it certainly fits into the overall secret war against the New Age meme as well.
Ironically, the only times in the Old Testament that we see flying vehicles they're always associated with Jehovah and his angels. But we're not supposed to talk about that anymore.
Either way, I think Final Events is a book all of us need to read. You can order it here.
at September 10, 2010