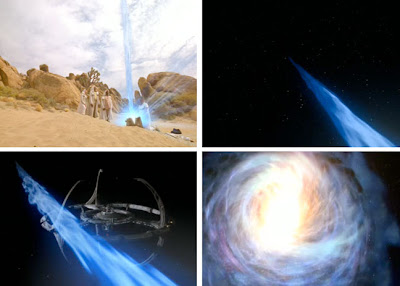 A blue spiral, then a wormhole. Look familiar?
I'm not sure why, but Star Trek has been resonating with me lately in a way it hasn't in a long time. It certainly has nothing to do with the recent feature film, it's something else I can't quite put my finger on.
Almost in a way The X-Files did ; the same kinds of synchronistic emanations have been hitting me left and right.
Particularly with Deep Space Nine. Star Trek: Deep Space Nine was the redheaded stepchild of the franchise, overshadowed by the august Next Generation and then pummeled by the backlash rightfully inspired by the irredeemable atrocity of Voyager. The similarly-themed Babylon 5 won the hearts of the hardcore geek community at the time as well.
It's a shame; DS9 was an incredibly potent bit of spiritual sci-fi infotainment with all kinds of scintillating connections. 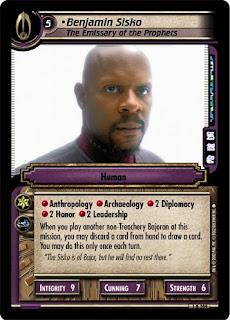 It was also by far the most subversive of the many spinoffs, turning a jaundiced eye to the imperialistic implications of the Federation itself and the politics of occupation and liberation. It was also soaked to the bone with mysticism, radical politics, prophecy (including a frightening prediction of our near future), AstroGnosticism, as well as other thought-crimes.
We looked at DS9 before the election, before I had really dug back into the series and its Prophets concept, which is a lot more interesting and complex than I had previously grokked. This episode ("Shadows and Symbols") is a great example of the Prophets storyline and Captain Sisko's evolution towards his alien apotheosis.
Note that the Prophets use symbol and Synchronicity to reawaken Sisko's cosmic consciousness. What is especially interesting in this episode is that it flashes another storyline from an earlier episode, that being the Dickian concept that DS9 was only an elaborate delusion being experienced by a failed sci-fi writer-turned-mental patient.
But given Roddenberry's past associations, the Prophets are especially fascinating: interdimensional, non-corporeal aliens who not only control a stable wormhole/stargate, they also have a habit of using human beings like the Loa ride their horses.
It's all hardcore spi-fi and part of an immense body of evidence showing that Gene Roddenberry and company weren't quite the diehard rationalists that a lot of their fans wish they were. It's no surprise that spi-fi titans like Ronald Moore (BSG, Caprica), Ira Steven Behr and René Echevarria (The 4400) cut their teeth on this series. 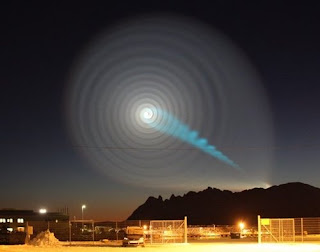 Aside from the Prophets, the bulk of DS9 (seasons 3-7) was focused on the Dominion War, an epic struggle with a rival imperial power that not only produced some exciting space battle scenes, but also prefigured a lot of the themes of occupation and resistance that Moore brought to fruition in BSG. Quite timely these days- more so than during the show's original run.