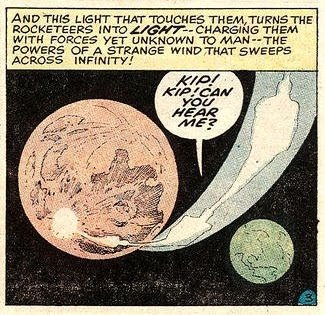 In that Kirby 2001/mushroom/star travel story, the astronauts are transformed into light for the journey through the furthest reaches of space. Which is fascinating to me, since that concept is at the core of the X-Files Mythology's cosmology- the transformation of souls into energy.

Harold Piller: "In almost every case the parents had a precognitive image of their child, dead. Horrible visions. I believe what this is, is the work of good spirits. Foretelling their fates. The fate the child was about to meet. A particularly violent fate that wasn't meant to be... which is why the spirits intervene transforming matter into pure energy. Starlight. But it's not what happened here."

Which is triply fascinating, since this concept of soul travel comes straight outta Egypt- the Akhu of the Pharaoh which becomes starlight and travels the heavens with Isis and Osiris:
Conceived of sky, born of dusk.
Sky conceived you and Orion,
Dusk gave birth to you and Orion.
Who lives lives by the gods' command,
You shall live!
You shall rise with Orion in the eastern sky,
You shall set with Orion in the western sky,
Your third is Sothis, pure of thrones,
She is your guide on sky's good paths,
In the Field of Rushes.
This concept is also passed down to us in the tradition of the Astral Body, which was taught by people as diverse as Gurdjieff, Rudolph Steiner, Jung and Casteneda, though in a different context.
And in that great AAT propaganda film that no one will recognize as such, Dave Bowman's last words before taking his own cross-cosmos journey (ending with his reincarnation as the Star Child) was, "My God, it's full of stars."
------------------------------