This is episode 3 of the 1979 series The Quatermass Conclusion (released full-length as simply Quatermass), and I can't seem to find the other parts online quite yet. But there's enough to chew on as Quatermass discovers a UFO cult in the British countryside that's being manipulated for sinister purposes.
I'm stunned - again - by Kneale's meticulous attention to detail, keen understanding of human behavior, and most of all- his prescience.
This episode alone not only prefigures The X-Files, but 80s sci-fi films like Streets of Fire, The Road Warrior and Conan the Barbarian as well. In many ways, this film also prefigures the Heaven's Gate cult: the end of this episode will give you chills.
More impressively, it's a classic British folk horror yarn in sci-fi drag. It has all the essentials: the English countryside, megaliths, murderous cults, harvest motifs, and sacrificial maidens. It also captures that weird apocalyptic aura that 1979 was strangely so full of.
From imdb:

After the mysterious destruction of the new space station, young people find themselves drawn to a stone circle in England, and other locations around Earth. They believe they'll be taken to a better place by a higher power. Only Professor Quatermass realizes that the young people are being tricked by an alien power, who wants to "harvest" humanity. It's up to Quatermass to find a way to stop the deadly plans of the aliens. 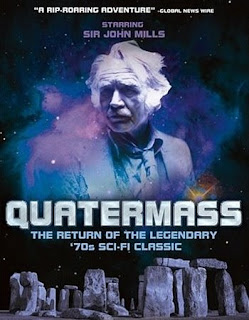 Civilisation is crumbling. Through the decay, Professor Quatermass searches for his missing granddaughter. Meanwhile an awesomely powerful beam of light is striking from space, each time apparantly transporting crowds of young people to another planet. But Quatermass and a young astromoner, Kapp, suspect a much more grisly purpose.

From the Google link:

Predictably rejected by an increasingly patronising BBC, this was one of the last thought-provoking dramas to be broadcast in Britain before Thatcher and her friends' clampdown on creative thought. John Mills stars as the eponymous Professor in 1979's Quatermass, the fourth, final and best of the celebrated television science fiction serials.

I might add that this series came out right around the same time as Jacques Vallee's Messengers of Deception. Tying in Heaven's Gate to the alien/entheogen links we've been looking at, I recommend you take a look at Timothy Leary's 1973 tract Starseed, in which he waxes poetic about the Comet Kahoutek in ways not entirely dissimilar to Marshall Applewhite's prophecies of Hale-Bopp.
The whole thing is most certainly bouncing around out there. Poke around and watch the whole thing. You will not regret it.