As we sat and waited for the Malthusian remake of The Day the Earth Stood Still (with Keanu Reeves as Klaatu and one-time Secret Sun siren Jennifer Connelly as Helen), I was reminded of a very strange episode in pop history, when the squarest musical combo to walk the face of the planet spent a king's ransom recording a telepathic invocation to authoritarian space messiahs.
A tune which itself had originally been written by a mysterious band with a strange, conspiratorial history and a penchant for top-tapping ditties like "Anus from Uranus," "Dog Star," and "Mister Manson."
First, a little deep background:

To many in the 60s counterculture, brother/sister act the Carpenters was living proof that the revolution was dead and buried, and that the "Silent Majority" now ruled unchallenged. The siblings hailed from Connecticut (then seen as the WASP-iest state in the union) and broke through to superstardom on the backs of a rejiggered bank commercial jingle.
Their music was seen as so completely toothless and un-threatening that Richard Nixon invited them to the White House to perform for the visiting German chancellor. The horror the Carpenters instilled in the hearts of hippies belied their extraordinary, nearly preternatural musical gifts.
Not only did Karen Carpenter have one of the richest and most resonant voices in pop history, she was also an accomplished drummer (a traditionally male occupation). And today Richard Carpenter is widely seen as one of the great arrangers of his generation. The Carpenters used these gifts and songs by masters like Burt Bachrach and Paul Williams to score hit after hit in the early 70s.
However, the counterculture began to regroup and mutate in the mid 70s, and stoner soft rock bands like Fleetwood Mac and gay/urban-influenced disco groups like KC and the Sunshine Band began their takeover of the charts in the mid 70s. Richard Carpenter struggled with a prescription drug habit and Karen would struggle with anorexia (and probably some other issues as well).
With their squeaky-clean style out of fashion and their records falling off the charts, the Carpenters took a strange left turn into the world of high weirdness...
When I first heard "Calling Occupants of Interplanetary Craft," I assumed that the Carpenters had recorded it to cash in on the success of Close Encounters of the Third Kind. But in fact the song had been recorded several months before the film's premiere and released 9/9/77, more than two months before the Spielberg film. Truth to tell, they probably didn't know Close Encounters existed back in those pre-Internet days.

I heard this song on the debut album of Klaatu*, a talented group of Canadian studio musicians who were heavily inspired by The Beatles, and named after the purposeful alien in the sci-fi thriller, The Day The Earth Stood Still. Always looking for something novel, we decided on it for Passage and ended up immersing ourselves – and 160 musicians and singers – in the biggest “single” recording we ever attempted.

Initially I did not think of this track as a single, but coincidentally, Star Wars had been released, and was all the rage, not long after we recorded “Occupants.” ....It did moderately well in the U.S., (but) went Top 10 in the U.K., and stayed there for two months.

And it was number one in Ireland, I might add. Now, the song's lyrics start off with a distinctly mystical air, suggesting to the listener that the aliens can be reached telepatically:

The song is insidiously catchy, and if you give it a few spins you'll find yourself humming it. Which may well be the whole point. The other night it was cycling over and over in my head as I was falling asleep. But the lyrics take a somewhat ominous, authoritarian tone in the song's refrain, which brings me back to the new Keanu/Klaatu film.
Please come in peace we beseech you
Only a landing will teach them
Our earth may never survive
So do come we beg you
Please interstellar policemen
Won't you give us a sign
Give us a sign that we've reached you
Hmmm...
As Carpenter notes, "Calling Occupants" was originally recorded by a Canadian studio group called Klaatu, in honor of the messiah figure in The Day the Earth Stood Still. And the story goes that the anonymous nature and familiar sound of the band soon gave rise to rumors that Klaatu were the Beatles, reformed under a pseudonym.

They remained an obscure group until 1977, when Charlie Parker, a DJ on WDRC in Providence, Rhode Island, played one of the tracks on his show. Hundreds of listeners phoned, convinced he had played a new Beatle record.

An article by Steve Smith in the 'Providence Journal' soon followed claiming that Klaatu was the Beatles. He suggested there were some 150 clues and pieces of evidence which pointed to a 'Klaatu Konspiracy'...

There was no biographical info on the cover, while the group's manager, Frank Davis, when asked directly if Klaatu were the Beatles, refused to confirm or deny the rumour. Likewise, Capitol, far from denying the allegations, went so far as to circulate the 'Providence Journal' article, and within 8 weeks, the album had sold 300,000 copies.- The Internet Beatles Album 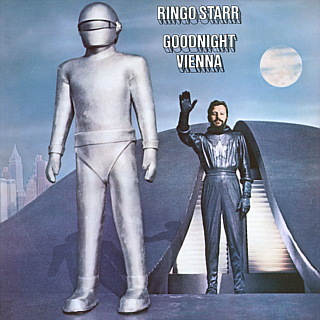 These suspicions weren't totally unfounded either:

On the cover of his Goodnight Vienna album, Ringo Starr's head was shown superimposed on the body of a character from the film The Day The Earth Stood Still. The character's name? Klaatu. The connection was strenthened by Apple promotional material for Goodnight Vienna, which said 'Don't Forget - Klaatu Barada Nikto'

My feeling on all of this?
Well, obviously Capitol wanted to sell some records, but I have a very strong feeling someone wanted this song to be heard by as large an audience as possible, which is why it was handed off from obscure band Klaatu (albeit a band marketed as the Beatles incognito) to supergroup, The Carpenters.
And, of course, Klaatu took on the name Carpenter as he went about his mission incognito on Earth. The song would again resurface in a dreadful cover by Babes in Toyland for the altrock comp If I Were a Carpenter, and again when recordings of the The Langley (!) Schools Music Project became a cult hit.
at November 29, 2008