What the hell is that disk
in the background?
My god, this is fascinating. I had only seen brief bits of Karen Carpenter playing the drums, but I had no idea she was this kind of virtuoso. Coming from a pretty hardcore musical family (and being a former musician myself), I can tell you that as players the Carpenters were drop-dead pros with impeccable chops.
The lyrics to this musical number are very revealing as well, with the androgynous, ectomorphic Richard staying at home playing classical music while the androgynous, ectomorphic Karen was a tomboy who took up the traditionally male instrument of the drums (apparently she was big on softball as well).
It also rips my guts out. I confess to a strong Gnostic streak, and often see this miserable world as an abortion that celebrates the talentless, the narcissistic and the mean-spirited, and grinds the truly gifted into the dirt.
Or in Karen's case, whittles them away to nothingness. And in the context of the Secret Sun, it often seems as if people such as Karen (and Elizabeth Fraser with her Siren/Sirian identity and language) are aliens, even somewhat in their appearance. After all, we've heard thousands of reports of androgynous, ectomorphic aliens, haven't we? 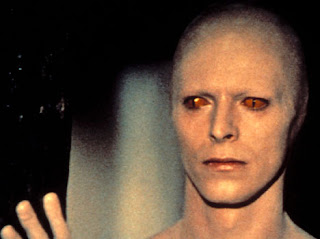 Slightly earthier-looking than Bowie actually was in '76
Jimi Hendrix certainly comes to mind, Jeff Buckley and David Bowie as well, though for some reason he survived his death trip by escaping to Berlin in 1977 (Bowie was obviously less conflicted about the gender ambiguity that seems to come with the territory with these genius/alien types). Hendrix and Bowie were obsessed and identified with aliens and UFOs and Jeff Buckley recorded his own invocation to the aliens entitled "Ozark Melody."
Which all links us back to the Carpenters' interstellar invocation.
HOLLYWOOD HATES WOMEN
If you want proof that Hollywood is inherently evil, look at it what it does to beautiful women. There's an army of overpaid, coked-up stylists preying on insecure celebrities, convincing them that they need to become botoxed, fish-lipped stick insects if they want to stay "hot." There's a whole host of starlets I lusted over back in the 80s, and not too many of them have become handsome middle-aged women. They've become freaks of science.
I often wonder if these stylists aren't actually out to destroy these women out of some psychotic jealousy fixation. Although I believe that Karen Carpenter had some personal, identity-based issues she was struggling with (again, par for the course with these alien types) it was some asshole record executive telling her the reason the Carpenters weren't scoring hits in the late 70s was because of her womanly hips which triggered her descent into a horrifying life of anorexia and bulimia that took this preternaturally-talented woman away from us. We see this over and over today with celebrity eating disorders. 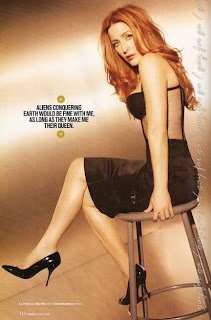 Gillian "Alien Isis" Anderson
escaped Hollywood and preserved her beauty
The sheer insanity of this is that full hips are one of the top fertility signals to men, as is a pleasing layer of well-toned flesh, particularly in the face. Though never a great beauty, Karen Carpenter looked perfectly handsome when healthy and positively alien when she was skinny. I really wish the message would get through to the beauty-destruction industry in Tinseltown.
at November 30, 2008