There are times when art becomes reality. The pilot for X-Files spinoff The Lone Gunmen, which eerily predicted a 9/11 scenario, is perhaps one of the most notorious examples of this.

Some have pointed at that episode as proof of government foreknowledge of the attacks, yet if you actually pay attention to the dialog in the episode (included in the clip above), it seems unlikely that someone in the government would sign off on such inflammatory rhetoric.

But given the various contacts that Chris Carter had with people inside the government security apparatus, it's entirely possible that people within certain agencies were feeding Carter certain scenarios from intelligence briefings as story ideas. It's even possible that some factions within the intelligence community were using the show to warn people of what other, more nefarious factions were up to. Stranger things have happened.

In an interview with Alex Jones, Gunman Dean Haglund ("Langley") stated that agents from the FBI and NASA would approach Chris Carter with story ideas. Haglund also claimed that the CIA would send people to Hollywood parties to keep tabs on what was being filmed, and said that before The X-Files premiered, a CIA psychic approached Carter and ensured him that his project would be successful.

What is also possible is that Carter and his team got the idea for the Gunmen pilot from the 1978 cult film, The Medusa Touch, in which a psychic psychotic played by Richard Burton steers a jet into an office tower to prove his telekinetic powers to his psychiatrist, played by the radiant Lee Remick. Given the fact that an X-Files episode named "Medusa" aired shortly before the Lone Gunmen pilot, it's likely that the producers were indeed inspired by this film.
"Medusa" takes place in Boston, where two of the 9/11 planes took off from, which might be an talking point for the foreknowledge side. For me, however, the coincidence of motifs between The Medusa Touch and the Gunmen pilot argues for an even more powerful force than human conspiracy.


Some people have mentioned the Tower trump of the Tarot in relation to 9/11. This is extremely frustrating to me (as is a lot of the conspiracy-driven symbology out there). There's only one building in The Tower trump and duality is an all-important concept in the esoteric tradition. And there are two other trumps in the famous Rider/Waite Tarot that are much more compelling in relation to the incident. 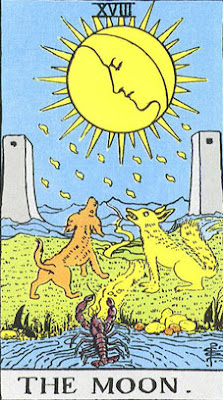 The Moon trump is one. An ill-omened card, it pictures two towers and flames falling from the sky. The theme of duality is continued with two threatening canines, a wolf and a dog. Emerging from the water is a crayfish, perhaps symbolizing the sign of Cancer, which is identified with the Moon. The card is the 18th card of the tarot, 18 being the sum of 6+6+6.

The number "666" comes to us from the 13th chapter of Revelations, which opens with a vision of the Beast coming up from the water, just as crabs and crayfish do. The proximity of the water to the two towers recalls the World Trade Center, which was close to the Hudson River. Strangely, the sky is blue here and the Moon more closely resembles the Sun, calling to mind that fateful September morning.
Maybe the dog and the wolf are calling out a warning to the towers that the Beast is approaching. When you see this card through the eyes of the dreaming mind- or the prophetic one- it takes on terrifying overtones. 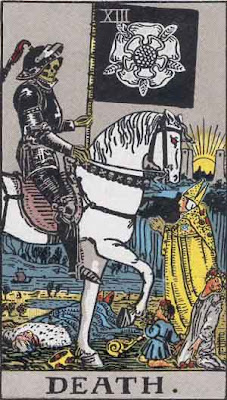 The Death card is even more compelling, and adds all-important Templar symbolism to the mix. Here we see Death as a knight on horseback, for my money a transparent nod to the Poor Knights. Cementing this connection are the dead king and the soon-to-be-dead Pontiff, recalling the swift revenge the Templars exacted on their tormentors King Philip and Pope Clement.
The Death Card is the thirteenth trump, bringing us back to the 13th chapter of Revelations. His white horse seems to be a reference to Revelation 6:8, the four dying figures perhaps a numerological reference to the one-fourth of humanity prophesied to die in that passage. Next to the Roman numerals for 13 is a white rose with ten petals, giving us that all important 10/13.

But for my money the action is in the background. In the river there is a Norman longboat, perhaps a tidy reference to the Templars' Norman origins. And facing the sunrise are two towers, acting as the gateway to a large city. Incredibly, the two towers natually resemble an eleven and between them are nine rays. But even more incredible to me- someone who is very familiar with the area in question- is how much the scene reminds me of a view of lower Manhattan from across the Hudson River in New Jersey.

When we see the card from the dreaming mind's eye, it very much resembles a symbolic view of lower Manhattan from across the Hudson River in New Jersey. Almost like this view from Liberty State Park, which pictures a proposed 9/11 memorial. Or this view below, which recalls the tidal pool in the Death trump. 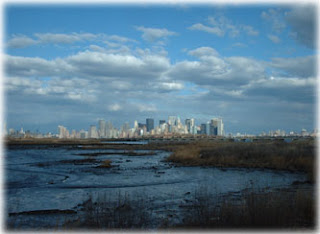 Do these cards depict a century-old foreknowledge of the attack, or something much more compelling? Did NASA cook up a "Face on Mars" hoax based on an obscure old Jack Kirby story? Did I submit my X-Files dream to Ten Thirteen Productions so they could adapt it for the "Provenance/Providence" (the latter being episode 9.11, by the way) two parter?
Or does the dreaming mind - the same as the prophetic or creative mind- tap into something that transcends time and space?

Now, I have no doubt at all that there is intentional symbolism in the media, or that predictive programming is a reality. That stuff can be fascinating, but what's much more fascinating is when definitive symbols or portents appear without the aid of human agency. Those moments when the Collective Unconscious sends signals to the reptilian brain and alerts us to forces and energies outside of our awareness.
at December 27, 2007