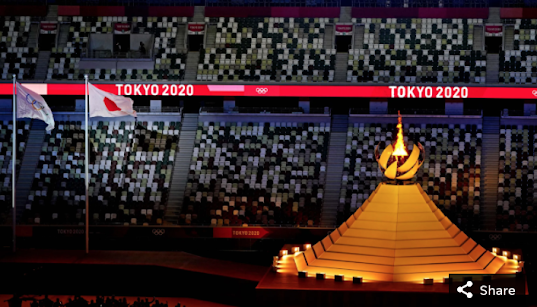 Where have all the people gone?

Olympic Ceremonies have always been a reliable barometer when it comes to the current ruling-class mindset, particularly their religious mindset.

It's common knowledge that the Olympics began as a specifically religious festival (honoring Zeus, specifically) and were revived during the heyday of European Freemasonry and the Victorian fetish for the old gods. I've been looking at the games since the earliest days of this blog and I have to confess: the rituals on display this year are not exactly filling my heart with boundless optimism. 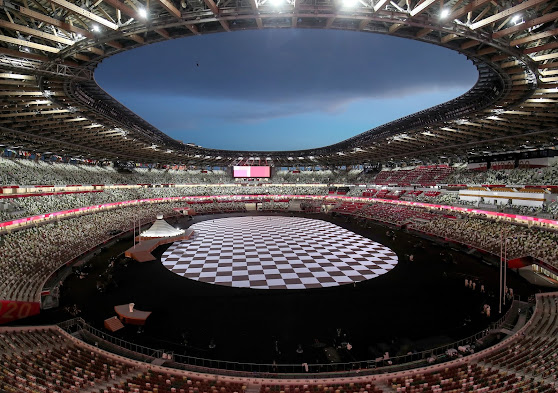 They weren't exactly subtle with the Masonic stuff. Maybe the time for subtlety has passed and the gloves are now off. Either way, the combination of the blatant symbolism and the empty stadium was a bit, shall we say, disconcerting.

I realize there's been a lot of speculation on the checkerboard motif but my current pet thesis is that it's a representation of the blinking on and off of Algol. But I'm always open to a compelling counter-theory. 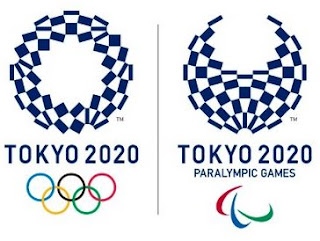 The symbology is also picked up in the official logo, which all with the Paralympic Games gives a solar and lunar motif, as one has come to expect. I also get a Sun God-Taurus vibe here, with the crescent resembling ox horns. 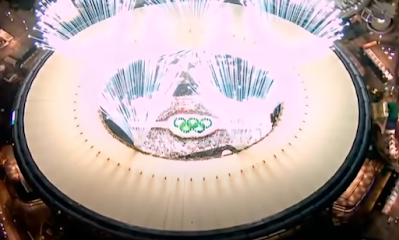 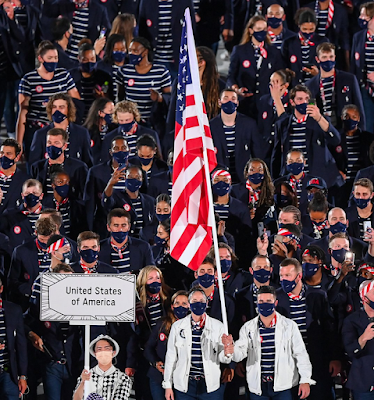 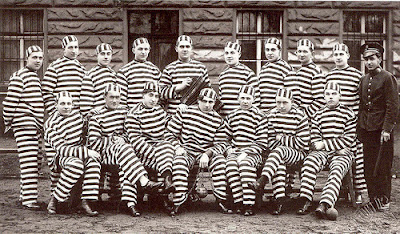 And then there were the striped jerseys which reminded me for all of the world of prison stripes. Which I'm also not taking as a particularly promising augur either. 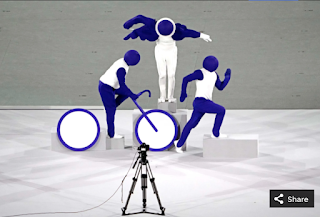 And there were human beings cosplaying as diagrams to suit the general theme of anti-humanism. But the real question is how does a nation as brilliant at image production serve up something as trash as this? This looks like a mediocre high school production.

In fact, the whole opening ceremony came off as low-budget and extremely half-assed cringe. And its lazy optics went all too well with the empty stands and the general atmosphere of defeat and despair hovering over the proceedings like your uncle's fart hanging over the Thanksgiving table.

Watch this thing then go rewatch the 2012 London opening ceremony. The difference is, to say the very least, stark.

Ever lie awake at night wondering how the Ancient Egyptians could be building magnificent pyramids one minute and piles of shit the next? Or how European sculpture could go from Roman masterpieces to primitive junk that looked like it was carved in an Ozarks outhouse?

I have good news and bad news for you, then: you're about to find out. 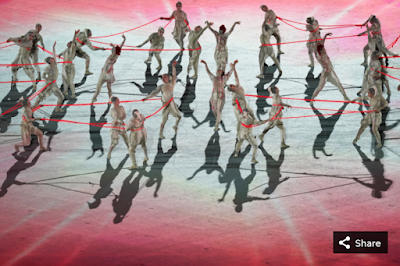 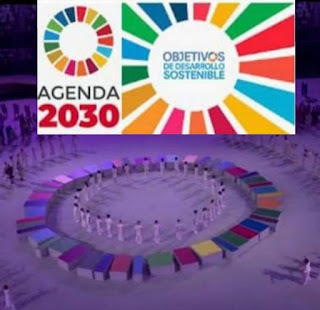 Which probably explains this correlation, which someone had pointed out on Twitter. 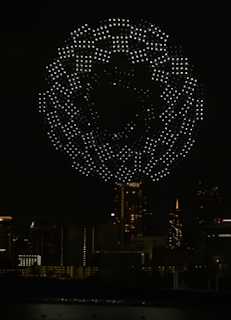 A lot of people have been talking about the drone show but aside the implied anti-humanism of it, I just wasn't all that impressed. I've seen better. 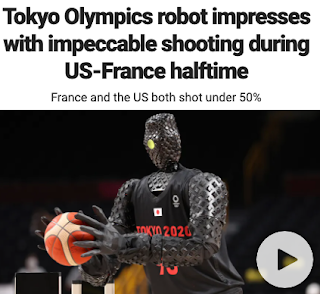 Adding to the aura of anti-humanism hovering over the entire proceedings was this repellant display: a mindless automaton shooting baskets for a non-existent crowd. A century of bullshit robot propaganda and this is the grand result: a hideous, moronic pile of scrap whose only function is to throw a leather ball through a metal hoop.
Absolutely douche-chilling. 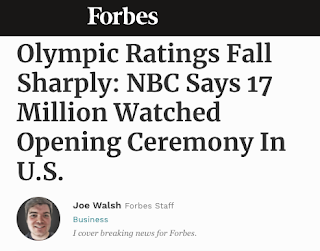 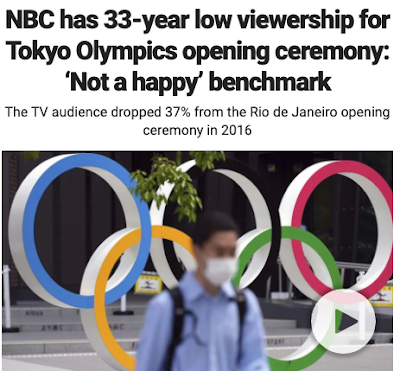 Even the rubes are staying away in droves, as they are increasingly doing with everything being queefed out of the rotting carcasses of network television these days.

That said, I'm sure these numbers are fake and were fed to the gullible wire services solely for the obligatory Masonic numerology. The real ratings are undoubtedly much worse. 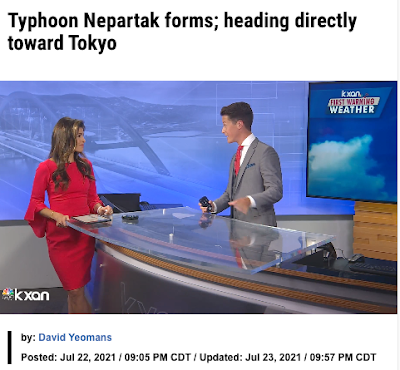 Predictably, the gods are already casting judgment on this risible farce.

Don't doubt for a second that they're just getting warmed up: this is just a sneak preview of what is barreling towards the self-appointed Masters of the Universe in the days to come. Nemesis has feasted long and well on their hubris, and they know-- I guarantee you right now they all fucking know-- that the payback is going to be a raging motherfucker unparalleled since the days of Atlantis.

I mean, if you believe in Atlantis. I'm agnostic on the subject. But you get the drift.

THE DEVOTIONAL PORTION OF THE PROGRAM 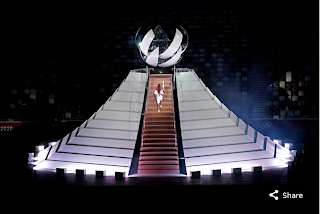 Which is why this kind of ritualism is getting so blatant, as I keep trying to tell you.

Trust your instincts: do you get the sense that one-world types are in any way happy, confident or optimistic about the unparalleled stranglehold they have on every meaningful institution in the Western World right now?

Do you get the sense that they are looking forward to a glorious thousand-year reign or dreading their own absolute destruction? 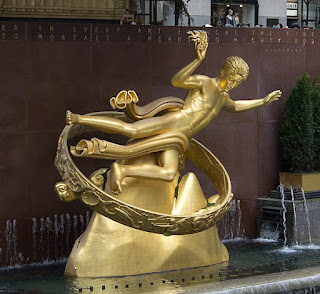 Be that as it may, what we're seeing in Tokyo is a spin on the same motif on display at Rockefeller Center. Namely Mithras "born from the rock"-- or more specifically, born from the Orphic Egg on the mountaintop, bringing light to his apostles. 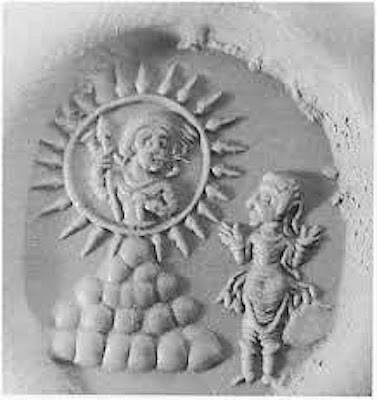 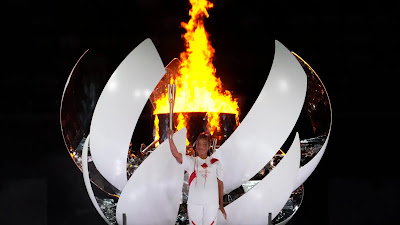 This girl here is playing Mithras, or rather TransMithras. But you can see the exact same symbolism, the Egg (named as representing the sun by the artist who designed it) atop the hill or mountain, Mithras bringing the flame with her/his torch. This is all well-attested to in ancient literature, even the gender-switching:

"Others are accustomed to ascend the hill-tops and sacrifice to Zeus, the name they give to the whole expanse of the heavens. Sacrifice is offered also to the sun and moon, to the earth and fire and water and the winds.

These alone are from ancient times the objects of their worship, but they have adopted also the practice of sacrifice to Urania, which they have learned from the Assyrians and Arabians. The Assyrians give to Aphrodite the name Mylitta, the Arabians Alilat and the Persians Mitra." -- Herodotus (5th c. B.C.) Histories, book 1, ch. 131 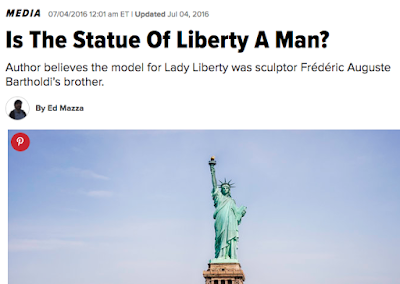 It's the very same symbolism we see in New York Harbor. 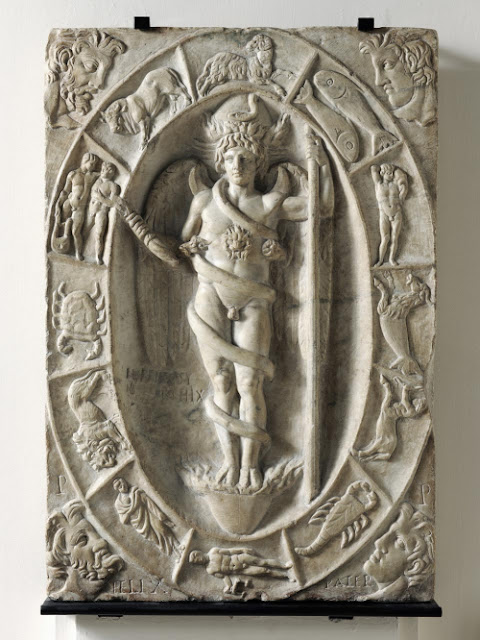 Mithras, like all major ancient gods, was perpetually syncretic and absorbed the roles and icons of lesser gods as he gained followers. In this particular iconography, Mithras had absorbed that of Phanes, "who brings light."
Names varied from 'Mithras-Phanes' to 'Zeus-Helios-Mithras-Phanes' to simply 'Aion', but it's the same basic concept. This icon was not only adapted by AT&T (and currently housed across the street from Pegasus Park in Dallas, three blocks from Dealey Plaza) it's also what we see above with "Prometheus" (sic): the god born from the egg, carrying a torch and surrounded by the Zodiac. 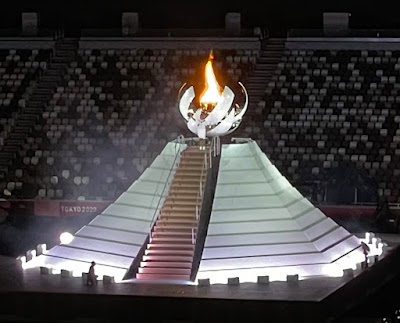 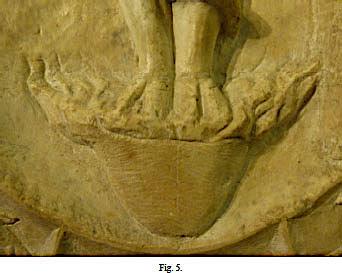 At Phanes' feet we can see the hatched Egg shooting out flames, exactly as we do in Tokyo, again with the TransMithras stand-in.

Considering the timeline, my guess would be that Mithras-Phanes-Aion was who the Apostle Paul was referring to when he wrote that Satan could disguise himself as an Angel of Light.

With that in mind, look at the cloven hooves. I doubt this is exactly where the Devil figure inherited them from (scholars generally believe the hooves are part of the whole package based on depictions of Pan), but still, pretty interesting.

There's also this correlation, which are just two different ways of expressing the same basic idea, the Dome (Womb) or Egg atop the holy mountain, giving birth to the god who will intercede between Earth and Heaven. 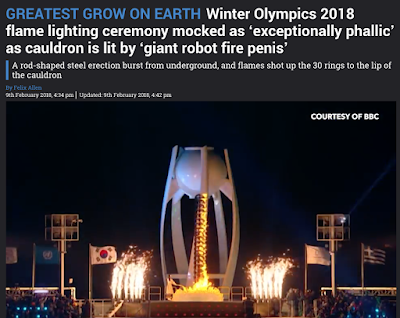 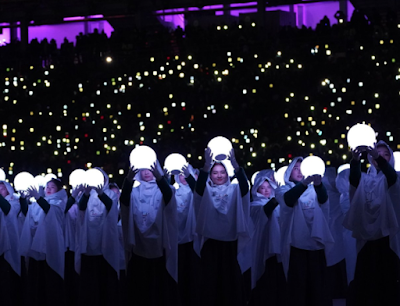 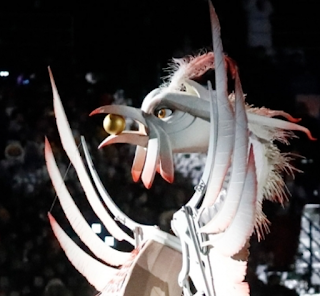 The Egg also looks like a pearl, which is a symbol we saw quite a lot of in the last Olympics held, also in Asia. Again, very chilling to see how badly the ceremonies have degraded in only three and a half years. Take my word for it: it's a bad sign.

How so? Let me just say that I seriously doubt we will have reliable Internet in 15 years from now, so do plan accordingly. 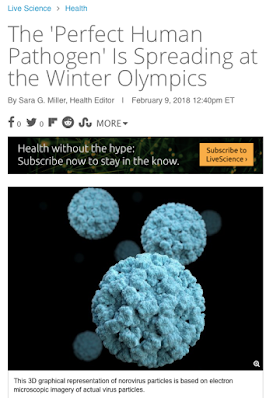 And how short are our memories anymore? I totally forgot about the Norovirus scare at the 2018 Olympics. Don't judge me too harshly: I'm just a simple man and can't keep track of every manufactured hysteria to come down the pike.
Come remind me what else I forgot in the comments.

We'll be going on a deeper dive into Olympic symbolism and what it portends for our futures too so do come enroll at the Secret Sun Institute of Advanced Synchromysticism.

The 1983 parade rolls on at the SHRR blog. We're going back to the Batcave and doing the Goth and Industrial Explosion now so please come along and join in.