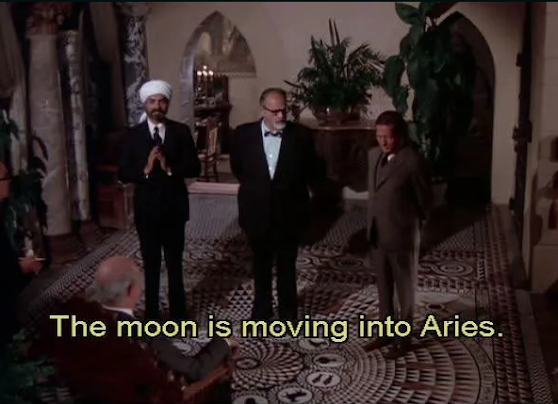 So having earned your Scentless Apprentice and your Mellow Craftsman merit badges, are you ready for the Third Degree? I guarantee you by the end of this process you'll know more about Masonic symbolism than over 99.33% of all Freems worldwide.

You might even be able to help de-gaslight your friends and family who think all of the cultic ritual nonsense we're increasingly bombarded with has some basis in objective reality. 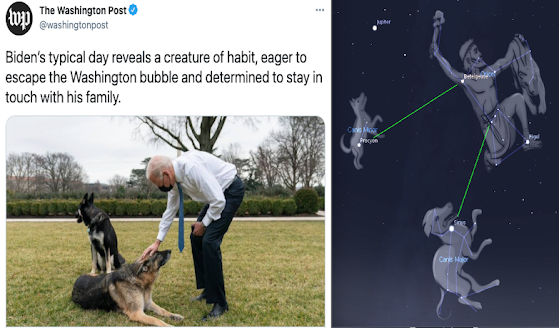 Here: you can start with this.
You see, Freemish symbolism draws on the same sources that groups much higher up in the foodchain do, and is more freely (or Freemly) available for analysis. And once you have the keys you'll realize this stuff is everywhere, often slathered all over seemingly unconnected events.

So let's recap with the Scentless Apprentice tracing board, depicting the Stairway to Sirius.... 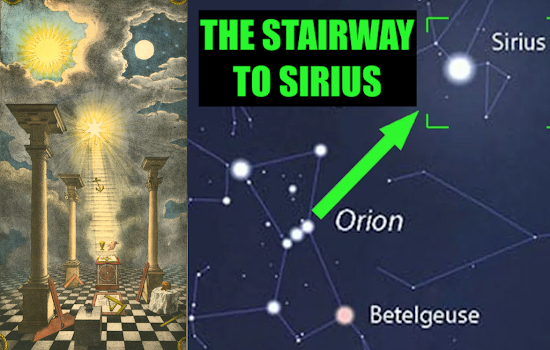 Or perhaps more accurately, the Stairway from Sirius.
Given the procession up the Galactic Plane, it's more accurate that those figures descending the stairway/ladder will be entering the Stairway to Heaven through the gates of Gemini. In that case, the Three Masons' Tools represent the wounds of Hiram/Abiff at the neck (Betelgeuse), the head (Meissa) and the chest (Bellatrix). All of which lead the initiate to the next degree... 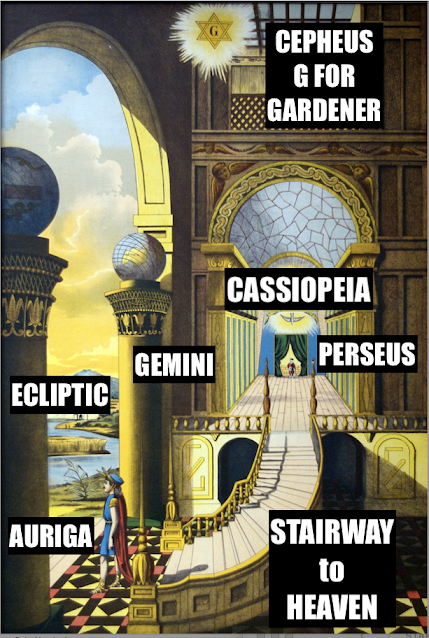 The Second Degree puts the initiates through the Gemini gates and into the anteroom/lobby before the Stairway to Heaven. He can see the destination-- Cepheus, the Garden -- but isn't quite ready to ascend to it. You gotta cool your heels and pay your bills before you can talk to the big boss upstairs.
And that's where the Third Degree comes in. 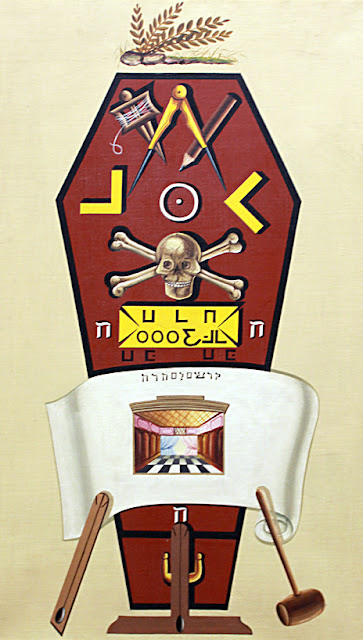 There are a number of variations on the Third Degree tracing board, but this one was the most comprehensive for our purposes. There again are the Three Masons' Tools, leading to the Gates, represented by the scroll and the twin symbols above it.
But what's the coffin? Are they saying the only way to ascend back to the Garden is the grave?
Well, yeah. 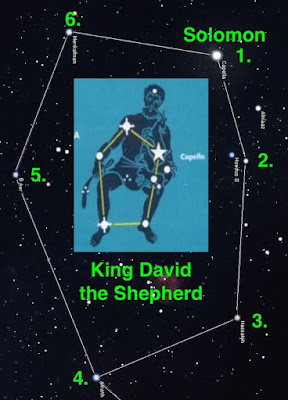 The coffin is our old friend, Auriga the Shepherd Charioteer. For those keeping score at home this is the Chariot of Fire that Elijah (Orion again) ascends to Heaven. It's not a flying saucer, alas. Well, maybe it originally was. Literally anything is possible at this point.
We've seen that Auriga is also King David, who was "a lover" of Hiram/Orion. But isn't Auriga traditionally depicted as a Pentagon? Yes, it is. But it's sometimes also drawn as a hexagon if you account for the "Kids" asterism. 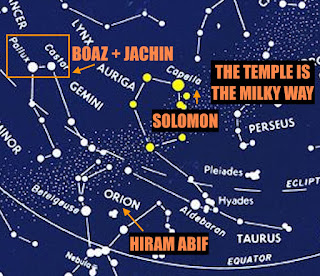 Hiram/Orion is building the Temple/Galactic Plane
for King Solomon/Capella
I'd say it's a good bet Auriga+Kids is the origin of the hexagram, AKA the Seal of Solomon (Capella) AKA the Star of David.
Solomon AKA Capella being the "star" of King David AKA Auriga the Shepherd Charioteer. 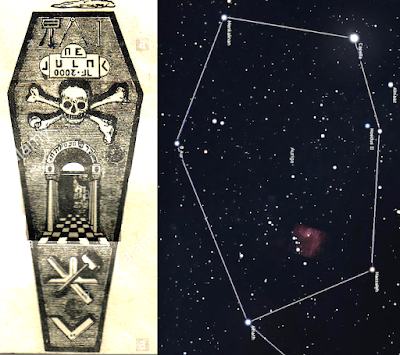 So with the Kids accounted for we see that the hexagonal coffin is Auriga. After all, the coffin is the chariot that takes you back to the Garden, God willing.
So what about the world-famous Skull and Bones? Oh, this is cute...

Every Man and Cowan is a Star (cultist)! 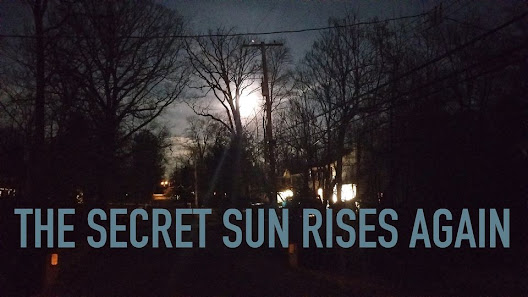