Well, it's that time of year again. In light of recent events, Midsummer AKA Saint John's Day seems a bit more resonant than it has before. Of course, we have a newly-minted Federal holiday that falls a mere two days short of the Solstice, in much the same way our national Bacchanalia falls three days short of the Equinox. But that's all coincidental, surely.
But, oh boy; have you read the news today? 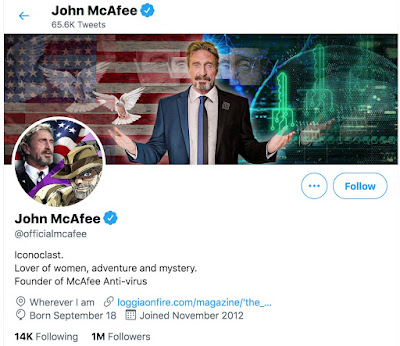 It seems a certain John of some note got killed-himself in prison, much like another high profile insider the Establishment suddenly found inconvenient a couple years back. This was all just in time for Saint John's Day and hot on the heels on another fellow who got killed-himself, this one a "Christopher Sign," who died 11 days before our John here.
All very portentous, semiotically speaking, wouldn't you say? Apocalypses are full of portentous semiotics. That's the whole point of them.
But I digress. Let's have a look at the reason for the season, courtesy of our bonnie Scottish pal, Sir James Frazer with a Zed.

BUT THE SEASON at which these fire-festivals have been most generally held all over Europe is the summer solstice, that is Midsummer Eve (the twenty-third of June) or Midsummer day (the twenty-fourth of June). A faint tinge of Christianity has been given to them by naming Midsummer Day after St. John the Baptist, but we cannot doubt that the celebration dates from a time long before the beginning of our era.

The summer solstice, or Midsummer Day, is the great turning-point in the sun’s career, when, after climbing higher and higher day by day in the sky, the luminary stops and thenceforth retraces his steps down the heavenly road.

Such a moment could not but be regarded with anxiety by primitive man so soon as he began to observe and ponder the courses of the great lights across the celestial vault; and having still to learn his own powerlessness in face of the vast cyclic changes of nature, he may have fancied that he could help the sun in his seeming decline—could prop his failing steps and rekindle the sinking flame of the red lamp in his feeble hand.

In some such thoughts as these the midsummer festivals of our European peasantry may perhaps have taken their rise. Whatever their origin, they have prevailed all over this quarter of the globe, from Ireland on the west to Russia on the east, and from Norway and Sweden on the north to Spain and Greece on the south.

According to a mediæval writer, the three great features of the midsummer celebration were the bonfires, the procession with torches round the fields, and the custom of rolling a wheel. - Sir James Frazer, The Golden Bough 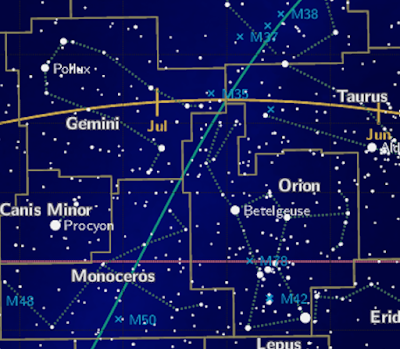 Another interesting thing about the day: as far as I can tell it seems to be the day when the Sun moves out of the spot our old friend the Hunter occupies just south of the Ecliptic.  I still need to tidy up my sums so don't quote me on that, but perhaps that gives us a better idea why this particular day is named after Saint John, in this case The Baptizer.

We can get into all that later. In the meantime, let's continue our studies. Don't forget to check all the informative videos I've tracked down for you.

All you Midsommar fans will get a kick out of this data-dessert, courtesy of Astrology.com:

In ancient times, midsummer's day was an occasion to pay homage to water, fire and plants. It was also a time to cleanse one's soul as well as to celebrate the summer solstice. However, over time, this holiday has lost most of its sacral meaning and only its various festive elements remain.
In England, people used to celebrate St. John's Eve by setting great bonfires after sunset. This was known as 'setting the watch' and men, women and children would jump through these bonfires for luck. The streets were lined with lanterns, and people carried cresset lamps set on poles as they went from one bonfire to the next.

These wandering, garlanded bands were called a 'marching watch'. Often they were attended by morris dancers, and traditional players dressed as a unicorn, a dragon, and six hobby-horse riders.
In northern countries such as Scandinavia, Estonia, Latvia, and Lithuania the summer solstice is still celebrated on this day. Traditionally, the evening festivities last the entire night, because the Sun does not set at this time in far northern latitudes. During this celebration men wear crowns of oak leaves and women put on wreaths of wild flowers. A bonfire is built, around which the night's activities take place.
In Sweden, flowers are an important aspect of the Midsummer festival. Girls and women weave wreaths of flowers to wear in their hair for the day. Wreaths or bouquets are traditionally made with seven or nine different types of wildflowers. Homes are similarly decorated: a flower wreath may be hung from the ceiling to bring blessing to the house and a pair of young birch branches put at the front door. - Astrology.com

As with all these types of things, there's no shortage of pagan precedents. I can't corroborate the account of the dour Scottish Reverend here, but my spider-senses tell me this info may come in handy at a later date.

When the Papacy sent its emissaries over Europe, towards the end of the sixth century, to gather in the Pagans into its fold, this festival was found in high favour in many countries. What was to be done with it? Were they to wage war with it? No. This would have been contrary to the famous advice of Pope Gregory I, that, by all means they should meet the Pagans half-way, and so bring them into the Roman Church.

The Gregorian policy was carefully observed; and so Midsummer-day, that had been hallowed by Paganism to the worship of Tammuz, was incorporated as a sacred Christian festival in the Roman calendar. The Two Babylons, Alexander Hislop

And speaking of Scottish rites, St. John's Day is quite familiar to Freems as the birthday (well, ultimately) of UGLE:

Masonic history records the beginning of the Grand Lodge of London and Westminster as being organized there on June 24, 1717, by a combined meeting of four local area Lodges. One of Lodges among the original 'Four Old Lodges' met there, assuming the name of the ale-house.

The famous meeting of June 24, 1717 (birthday of St. John the Baptist) was the designated as the Annual Assembly and Feast. Three additional annual meetings were subsequently specified by the original General Regulations; one on Michaelmas (in September), one just after Christmas (December 27 - birthday of St. John the Evangelist), and another on Lady Day (Annunciation Day, March 25). There is no record that these specified meetings actually occurred. - Phoenix Masonry

23 skidoo! 230 years after that auspicious Freemly nativity, the UFO Age began when a fellow named Kenneth Arnold spotted some batarang-looking objects whizzing past him as he flew over Mount Rainier.

A week later, radar operators at Roswell Army Air Force Base picked up some strange pinging on their instruments, which would soon result in a strange debris field on the Plains of San Agustin in Corona. 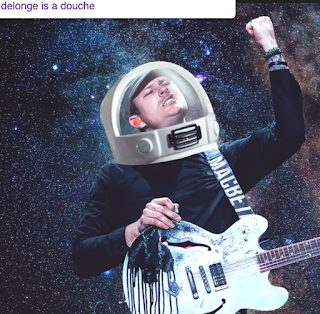 The UFO Age would come screeching to a dead halt some 70 years later when a Freemish fellow who got rich selling songs about farts to junior high school boys decided to muscle in on the action.

Did I mention 2017 was also the Freemly Tercentennial? I didn't? Oh, stop it. I did so.

But Rainier, Rainier... why does that sound so familiar? 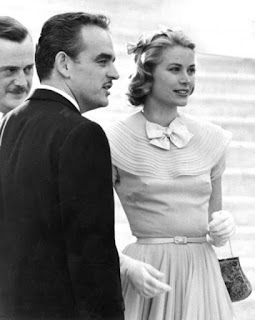 Oh yes, Prince Rainier of Monaco, who married the incandescent Grace Kelly, who was later a member of the elite sex-cult called...

(The Sovereign Order of the Solar Temple''s) origins date back to the so called "Arginy Renaissance", a mystical experience of June 12, 1952, when French esoteric author Jacques Breyer (1922-1996) and two companions were contacted by secret "Masters of the Temple" and asked to establish a "Templar Renaissance".
The "Renaissance" eventually materialized -- after many years of esoteric activity by Breyer and his friends -- into the OSTS, established on June 24, 1966 and incorporated under Monaco law in 1967. Monaco was selected because the Grand Master hand-picked by Breyer for the OSTS was Jean-Louis Marsan (1923-1982), a Monaco socialite and a friend of Prince Ranier III. - CESNUR

...The International Chivalric Order Solar Tradition was a destructive, doomsday cult founded by Luc Jouret in 1984. It absorbed the Foundation Golden Way led by Joseph Di Mambro (1926-1995). While Jouret assumed much of the public leadership, Dimambro convinced members that he was a member of the 14th Century Christian Order of the Knights Templar during a previous life and that his daughter Emanuelle was "the cosmic child."
Together, Jouret and Dimambro convinced followers that they would lead them after death to a planet which revolves around the star Sirius. They regard death as an illusion and that life continues on other planets.

I can't find any information at present as the date of the OST's establishment, but I'm going to go out on a limb and say it was probably June 24th as well. They went up in smoke-- literally-- the same year another alien walk-in cult from Tom DeLonge's neck of the woods decided to exit their vehicles.
And of course, such a portentous date can't go by without the Oracle of the Apocalypse immanetizing its eschaton. Especially considering the semiotic connections to DeLonge and the fact that his former friends in the Great UFO Psyop® are doing what so many others have done before them and trying to rub a bit of her magic all over their workings.
Generals, sorcerers and proconsuls were doing the exact same thing thousands of years ago, so that's just business as usual. I still wouldn't recommend it in this case -- not unless you're hankering for a nasty smiting from on high -- but no one ever listens to me. 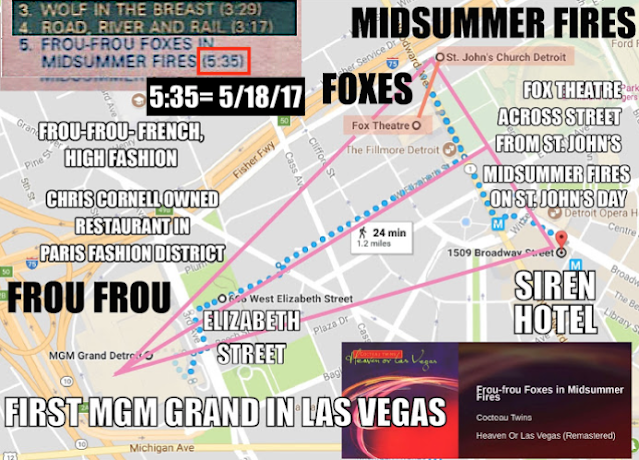 And of course these same dread prophetic incantations pre-announced the martyrdom of the Horned Christ,† which was the big kick-off to the Apocalypse we are all a part of now.
Don't believe it? It's OK, you will. Of that I am absolutely certain. 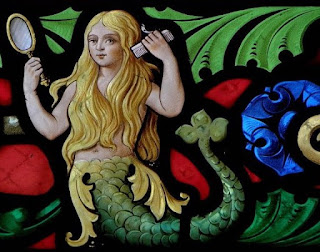 Here's a bonus historical factoid from our pal JB:

Young men were drowned in a river as a sacrifice to the goddess Melusine (Celtic Lilith)* on June 24th, this pagan festival now recycled in the Province of Québec and backwater parts of France as "St. John the Baptist day".

I'm taking altar calls for Our Lady at the Den. Or comments, or whatever. Do what you want.

† ALSO "CHERRY COLORED" = "CHRIS CORNELL." Think on it carefully. Pray for guidance, if need be.