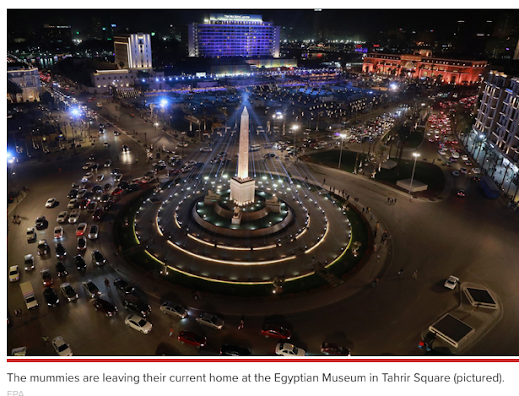 Well, the Egyptian government held a big parade today, where 22 (Twinty-Twin, in Secret Sun parlance) royal mummies were put on display while being driven across town for some contrived reason or other. The prevailing opinion is that this is all meant to goose up the tourist trade, which has been hit hard by global shutdowns.

That could certainly be true. But I'm getting a strong vibe that there may be some Freemly frolics and secret society shenanigans afoot in the Victorious City.

Why would I think a thing like that? you may ask, as you momentarily forget which blog you were visiting.

Well, start with the fact that they chose to do this on the Saturday of Holy Week, when Jesus Christ was believed to have been entombed, or variously, had descended to Purgatory to preach to lost souls.

And do note the poor dead bastards originally hailed from Luxor. 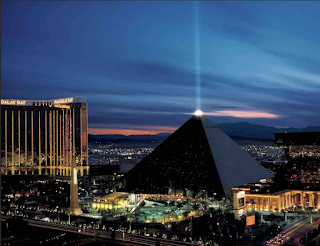 No, not that Luxor. 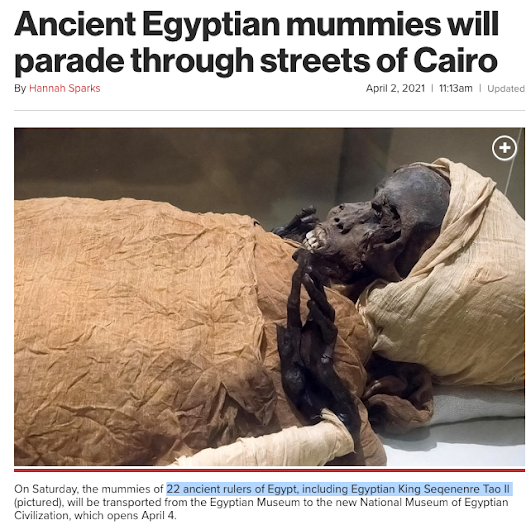 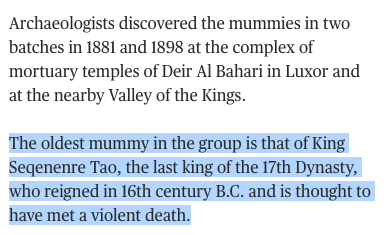 And then there's this chap there, Seqenenre Tao, who seems to be enjoying a starring role in this Anti-Easter parade. What's this ugly looking fuck's story? you may ask. And what the hell does it have to do with Freemeristic festive frolics? you may wonder.

Oh, it has EVERYTHING TO DO WITH THEM, fren.

There are many theories surrounding the life and actions of Hiram Abif, but nothing is solid fact. Many scholars agree that Hiram Abif is one of the original “Hiram” characters to appear in the bible. It has long been stated amongst masons that Hiram Abif was the widows son, as mentioned in bible verses. The bible however is clear that the chief architect of the Temple of Solomon was God, who passed the plans down to David, who in turn gave them to King Solomon. 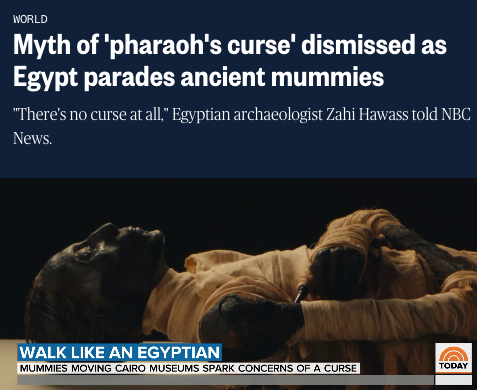 One Interesting theory, put forward by Masonic researchers Lomas & Knight, is that Hiram was an Egyptian king whose death triggered the new kingdom in Egypt. The links between ancient Egypt and masonry have long been talked about, and King Seqenenre Tao certainty ticks most of the boxes in our search for Hiram Abif.

Seqenenre Tao's mummified body was discovered in 1881, the method of death is identical to that found in the story of Hiram Abif in the masonic 3rd degree. 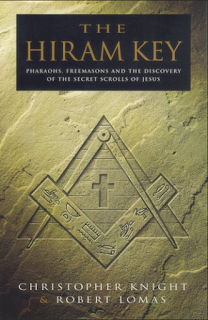 This was all made public by Twin Freemsters - Christopher Knight and Robert Lomas (a Freemster's union, if you will), in their book The Hiram Key. So what does this all have to do with Easter weekend?

Well, here's what the book claims:

Sure they did. Starting to get the picture? 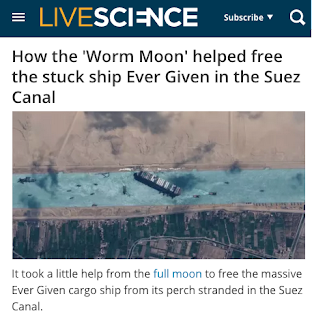 And what about the recent hullaballoo in the Suez with the ever-lovin' Evergreen Ever Given? Well, let's look at Evergreen in the context of our story:

First. The acacia, in the mythic system of Freemasonry, is preeminently the symbol of the IMMORTALITY OF THE SOUL--that important doctrine which it is the great design of the institution to teach.

Hence, in the impressive funeral service of our order, it is said, "This evergreen is an emblem of our faith in the immortality of the soul. By this we are reminded that we have an immortal part within us, which shall survive the grave, and which shall never, never, never die."

The Symbolism of Freemasonry by Albert G. Mackey [1882]

Let's take a quick look at some other possible symbolism here:

Among the most popular tales in ancient Egypt concerning the Nile is that of the god Osiris and his betrayal and murder by his brother-god Set. Set was jealous of Osiris' power and popularity and so tricked him into laying down inside an elaborate coffin (sarcophagus) pretending he would give it as a gift to the one who fit into it the best.

Once Osiris was inside, Set slammed the lid down and threw Osiris into the Nile River. Osiris' wife, Isis, went searching for her husband's body in order to give it proper burial and, after looking in many places, came upon some children playing by the Nile who told her where she could find the coffin. From this story comes the ancient belief of the Egyptians that children possessed the gift of divination as they were able to tell the goddess something which she could not discover herself.

Hence the Djed pillar. Remember that? 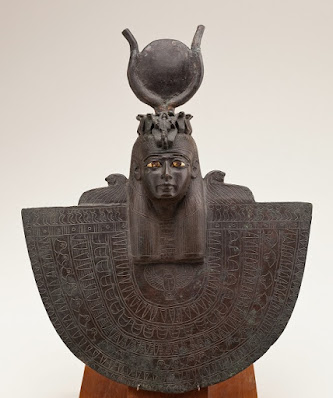 So the Moon frees the "Evergreen" from the Nile, eh? Nothing to do with Isis being a Moon goddess or anything. Surely. 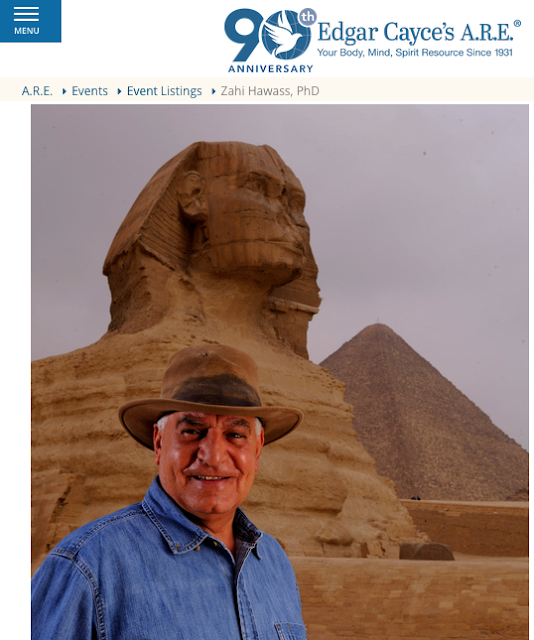 And of course our old chum Zahi Aiwass is at the center of it all. 93, Zahi!

Aiwass even let slip that parading Twinty-Twin mummies around was really about: a magical ritual. Bless his heart.
We all know zany Zahi sprang forth from the fruitful loins of the Edgar Cayce network, but was Cayce a Stonecutter? Ancient Astronaut Theorists say yes, but Freemsters say no. Let's read why:

It is often asked if there is a connection between Freemasonry and Edgar Cayce. The American Prophet was not a Freemason.

Well, that settles that. If you can't trust a Freemie, who can you trust? Let's read more.

He did make mention of the order though in his voluminous work. The paperback book Edgar Cayce on Prophecy, published in 1967 by Carter, is a short compilation on the probable realities available to Cayce through the Akashic records, we are informed.
Chapter 7, Destiny of Nations, opens as follows, "The peace of the world will be shaped upon the American ideals and those of the Masonic Order!"

To translate, Cayce is saying here that the New World Order will be Masonic. Sounds about right to me. That Cayce guy was a prophet, give him that. 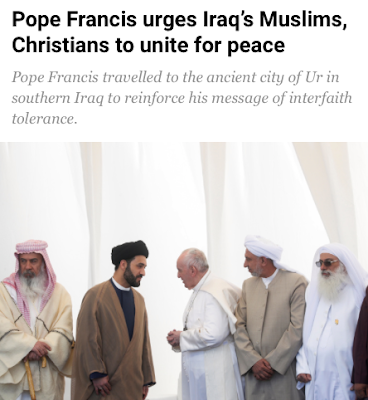 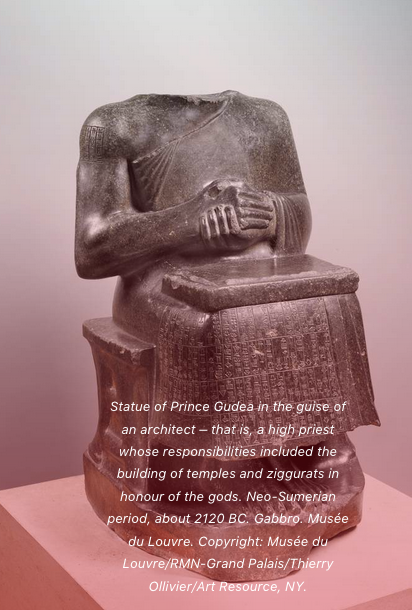 Ur is where Sumerian Kings served as the "Architects of Heaven," like our old friend Gudea here. Given that Abraham originally hailed from Ur, I always wondered if the name Judah (Abraham's grandson) derived from "Gudea." It's not even a half-step, etymologically-speaking.
In any event, looks like Gudea was rocking his band new Anunaki iPad there, huh? Note his fancily embroidered apron too. Whatever happened to guys running around wearing fancy aprons anyway?
Speaking of which, what kind of shenanigans have been afoot with the space ritual gang? Let's start with Duke Elon Musktreides:

Fallen debris from SpaceX rocket launch lands on a farm in central Washington
This pressure vessel, which came from the second stage of a Falcon 9 rocket, fell onto a farm in central Washington, local authorities reported April 2, 2021.
A piece of debris from a SpaceX launch has turned up on someone's farm in central Washington, local authorities reported Friday (April 2) — about one week after the falling rocket debris sparked reports of "shooting stars" the U.S. Pacific Northwest.
According to the Grant County Sheriff's Office, the recovered object appears to be a composite overwrapped pressure vessel, or COPV, belonging to the second stage of the Falcon 9 rocket that launched March 4 from NASA's Kennedy Space Center in Florida, on a mission dubbed Starlink 17.

Horus, 9, 17, scattered remnants in the Osirian fashion: Elon Oomingmak is quite excellent at keeping up observances, it would appear.
What about the NASAholes? What were those zany pranksters up to this past week? 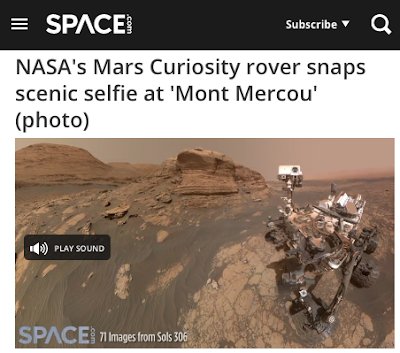 LOL. Whatever you say, NASAholes.

The Secret Sun Institute of Advanced Synchromysticism is premiering an 80 minute exclusive video for VIP Patrons tonight at 11:59 PM EST. Don't miss it- enroll today.
Make sure your comments are on the level in the Den of Intrigue.