Pseudo-Science Friday: Some Say in Ice 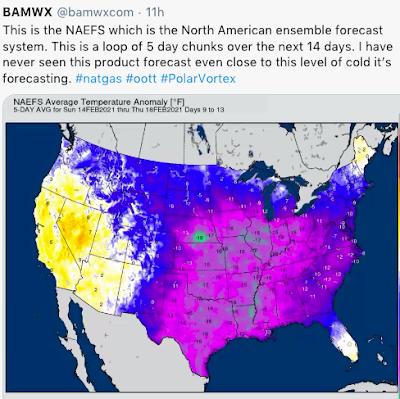 Bundle up, folks in the lower 48: looks like Old Man Winter is a climate denier and is sending a massive blast of arctic air our way. Probably a conspiracy to make our new climate czar look stupid. Well, more stupid.
Hey Big Tech: deplatform Mr. Icicle already! He's too much! 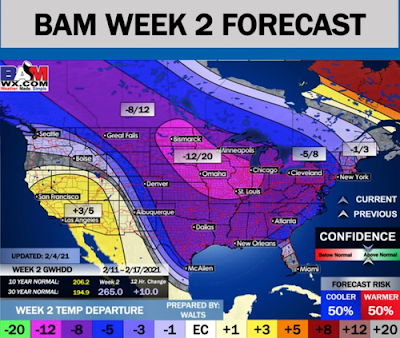 Hold on a sec: it looks like all 50 states are fixing' to turn to snow in Mister Ten Below's clutch. He's probably being blackmailed into discrediting settled climate science by Putin. I think he's probably one of those Qpeople as well:

Brace yourself for a cold snap.

A bitterly cold polar vortex is set to hit the US this weekend, sending the mercury diving in much of the country and plunging some states into “deep freeze,” forecasts predict.

The arctic blast will blow in Sunday night to plunge temperatures nationwide, including in normally balmy Hawaii and Florida, according to AccuWeather and the National Weather Service.

“The frigid weather will usher in the lowest temperatures of the season so far, and it will be enough to pose dangers to Americans spending time outdoors,” AccuWeather warned Friday. “Bitter cold may add a bit of shock.”

This is on top of the pounding we got the other day (we got two feet of the white stuff here). I blame Cheeto Hitler and his super-secret Bond-villain weather-weapons.

Drone the Arctic Circle! Save our People and their Democratic Republic! 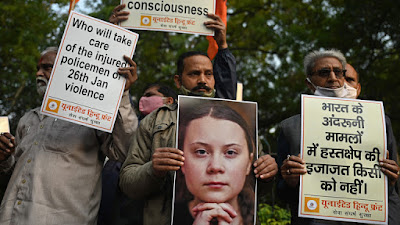 This arctic insurrection is so bad that Pearly Pigtails is having to find new causes to espouse.  Luckily, she's an expert in absolutely everything and can speak with total authority about agricultural policy in the Indian subcontinent.
Thank your ruby stars we have such a gifted polymath to set things to right.
UPDATE: Looks like this very troubled girl's exploiters/manipulators stepped in it this time and pissed off the wrong people.  Hopefully all the snakes will slither back into their holes and this mentally-ill child can get the care she desperately needs. 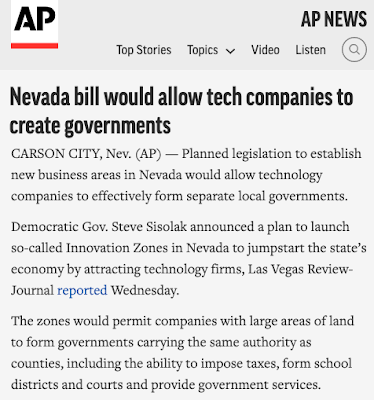 Democrats 2020: Cheeto Hitler is a clear and present danger to Democracy! Carpet-bomb the Red States! Drone 'em all and let Mithras sort them out!
Democrats 2021: Let's carpet-bomb the Constitution and replace it with literal Feudalism! Suck on it, serfs! 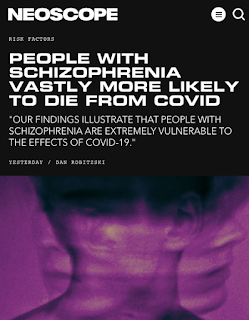 So weird that this Covid thing seems to be targeting the demographics disproportionately reliant on public assistance. Doubly weird that it's happening while cash-strapped states like New York and California are struggling to balance their budgets. Triply weird that it's many of the same kinds of people the Nazis targeted during the 1930s.
Synchronicity, surely. 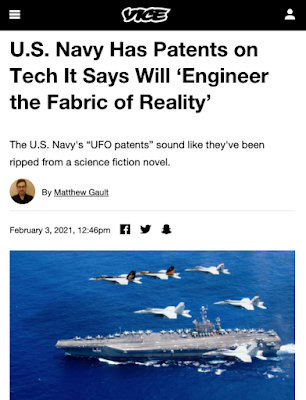 NO, ACTUALLY THEY DON'T
Such a bizarre and improbable coincidence that most of the ridiculous science-fiction clogging up pop-science sites seemed to disappear after a certain somebody killed himself in prison. Or didn't kill himself, if that's how you roll.
There are always a few stragglers, like this steaming pile of sci-fi stupidity. Just more clickbait designed to condition the gullible that technological and scientific progress hasn't been utterly becalmed for quite some time now. But it all comes down to the bottom line, and if this Navy press release is true, this thing is as phony as your gut tells you it is.
From The War Zone:

Timothy Boulay, Communications Director at NAWCAD, confirmed several points to The War Zone by email:
- The High Energy Electromagnetic Field Generator testing occurred from October 2016 through September 2019;
- The cost was $508,000 over the course of three years. Around ninety percent of the total - $462,000 - was for salaries, while the rest was used for equipment, test preparation, testing and assessment.
- When NAWCAD concluded testing in September 2019, the “Pais Effect” could not be proven.
- No further research has been conducted, and the project has not transitioned to any other government or civilian organization.

Correct me if I'm wrong but hasn't the Navy been known to spend half a million dollars on a toilet seat? Well, give or take.
So call me a woo-woo, but I'm placing this story straight into the round-file. Or as I like to call it, "my DARPA File." 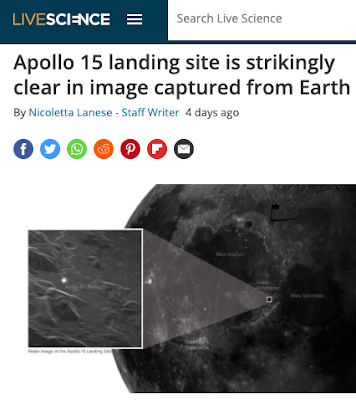 Strikingly clear, just not strikingly clear enough to show any, y'know, evidence of a landing site. It's a little known fact that all of our telescopes have a weird flaw: they're all far-sighted. Which is why they can see planets in other galaxies but nothing on the Moon. 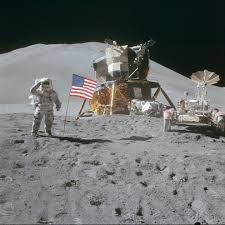 Oddly enough, the cameras the Apollo 15 were near-sighted: you could see all the equipment with perfect clarity but they couldn't pick up those majestic cliffs and gigantic rocky mountains in the close distance to the landing site.
I hear Elon Musk is working to fix that problem. 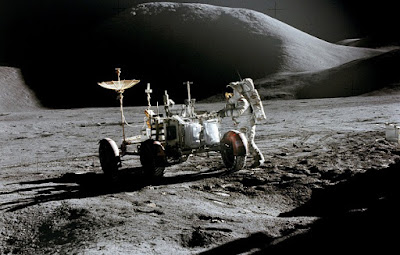 He should also have his people work on the camera flaw that prevented all the Apollo cameras from picking up any background details farther than a hundred feet or so in any direction. Strictly for comparison's sake, that's roughly about what you might see in a large soundstage.
The cameras also seemed to create the optical illusion that the very close horizon there looks like a perfectly level soundstage floor. Maybe Lex Bezos can put his people to work on these problems now that he's going full time with the space stuff. 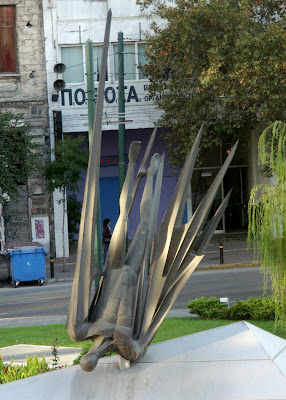 Speaking of photographing the Moon, I found the building where Sophie Zeon met their unfortunate end while trying to snap a picture of the full Wolf Moon. It's in the Attica section of central Athens, just a block away from the Fallen Aviators memorial, which features this depiction of Icarus. It took some time to find, but luckily I have really, really bad OCD.
I found the building by looking for the oriels and balustrades shown in the news stories. 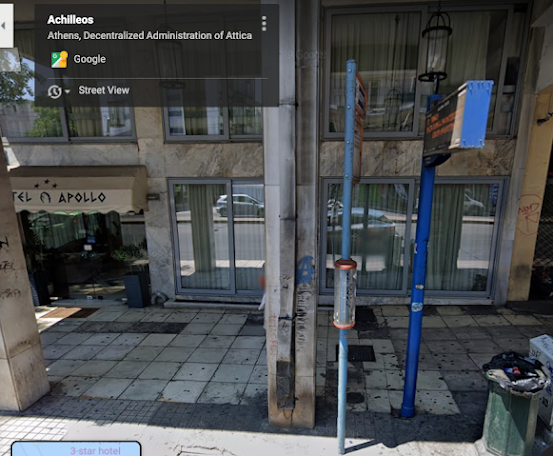 And, of course, the flagstones.
I found those next door at the Apollo Hotel, which is the only one so-named in Athens. I was very surprised by this because you'd think Apollo would lend his name to a few of them in a city like Athens.
I'll have to check in Delphi, seeing how Apollo was the god of Oracles.
Also, Sibyls. 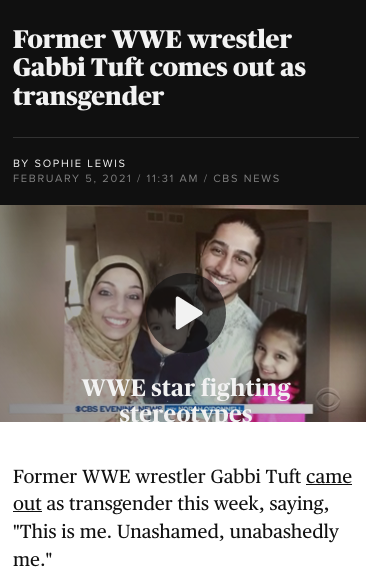 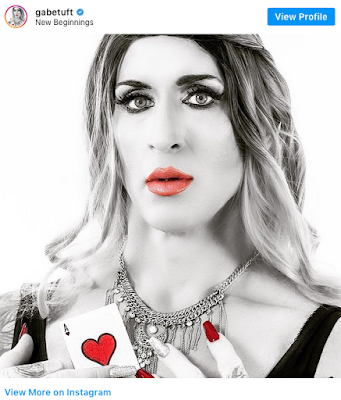 In a related story, congratulations to former WWE Gabbi Tuft for affirming her gender identity on Instagram this week. I thought this was an interesting sync following Sophie's Fall in Attica.
Seeing as we have Greece and an Archangel in the mix ('Gabbi' is a diminutive of Gabriella, the feminine rendering of Gabriel), I thought I'd take the opportunity to offer up an etymology tutorial for my wonderful readers. Etymology is a science, after all. 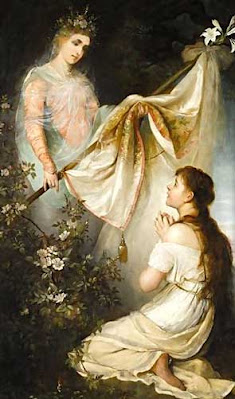 You see, up until the mid-late 19th Century, angels were commonly-- if not predominantly-- depicted as transgender, or transvestites.
Yes, that image there is meant to be of Joan d'Arc and the Archangel Michael. 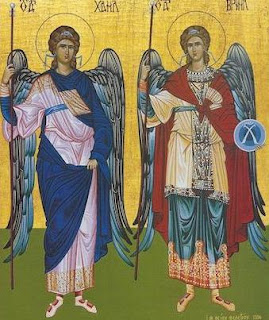 This goes all the way back to the late Roman Empire, as we see with these Orthodox depictions of angels dressed in the traditional clothing and hairstyles of an upper-class Roman matron. 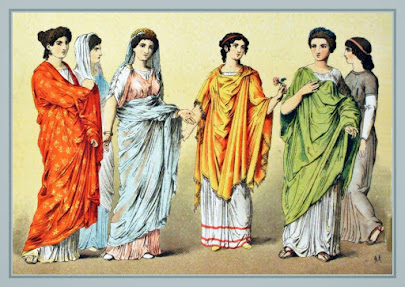 As you can see here. 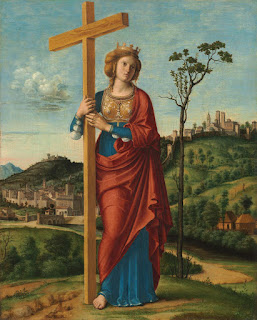 Or with this depiction of Saint Helen. 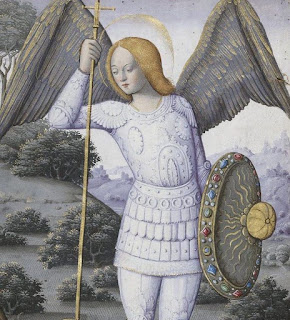 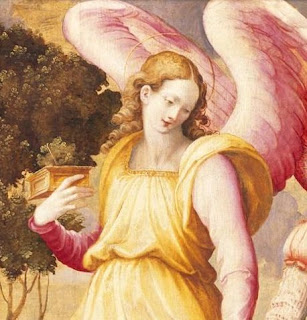 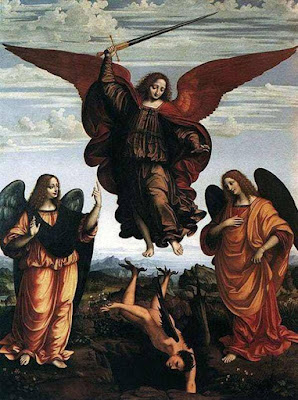 This practice carried over into the Holy Roman Empire and Western Europe in general. It wasn't until the 19th Century that we started to see more masculine renderings here and there. 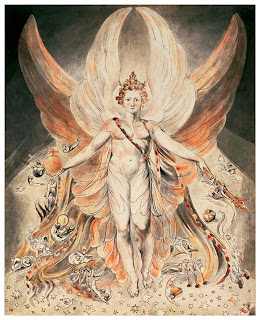 William Blake also depicted the Archangel Lucifer as quite effeminate as well.

And there's an interesting fact of history that might explain this unlikely phenomenon.  The Hebrew word for Messenger (or Angel) is essentially identical to the Greek word for male temple prostitute.

"Know ye not that the unrighteous shall not inherit the kingdom of God? Be not deceived: neither fornicators, nor idolaters, nor adulterers, nor effeminate (malakoi), nor abusers of themselves with mankind, (arsenokoites)" -1 Cor 6:9, KJV

Malakoi -- specifically refers to a male temple prostitute of goddesses like Atargatis, Astarte and Asherah-- and is essentially the same word as "Malachi," a Hebrew word formally meaning "My Messenger."

The morphological structure of the word mal’akh suggests that it is the maqtal form of the root denoting the tool or the means of performing it.

The term Mal'akh therefore simply means the one who is sent, often translated as "messenger" when applied to humans; for instance,

Mal’akh is the root of the name of the prophet Malachi, whose name means "my messenger". In modern Hebrew, mal’akh is the general word for "angel"; it is also related to the words for "angel" in Arabic (malak ملاك), Aramaic and Ethiopic.

Kind of puts the whole Sodom and Gomorrah story in a new light, wouldn't you say? Interesting to see someone like Gabbi Tufts affirming her angelhood in these times, seeing how Mal'akhs were a warrior class.
Bonus factoid: The Watchers were also Mal'akhs.
According to the Book of Enoch, one of the leaders of the Watcher's host- Azazel - taught men to make weapons of war. He (they?) also taught men the arts of cosmetics and jewelry.
Enoch doesn't specify who taught women the arts of cosmetics and jewelry.
Extra Credit Wisdom for the experts.