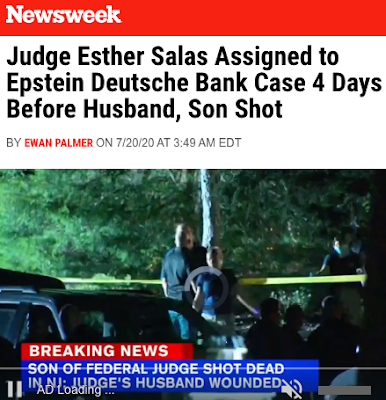 I've been saying all along that the Epstein bust/snuff were/are a much bigger deal than anyone could imagine, very possibly a flashpoint for a total systemic meltdown.

And here we are a year later and the wheels are well and truly coming off the buggy. Lots of very odd things are now happening in the wake of the Ghislaine bust and a lot of it is parking right inside the Secret Sun Wheelhouse. 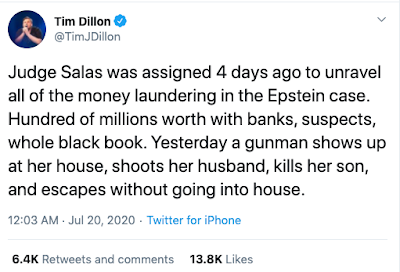 The very funny Tim Dillon encapsulates the latest act in the ongoing psychodrama: Judge Esther ("Ishtar") Salas was recently assigned to hear the Deutsche Bank/Epstein money-laundering case shortly before an assassin show up at her front door disguised as a FedEx guy to gun down her son and seriously wound her husband.

This went down in North Brunswick, a town I know quite well on account of one of my best buds lived there. True story. 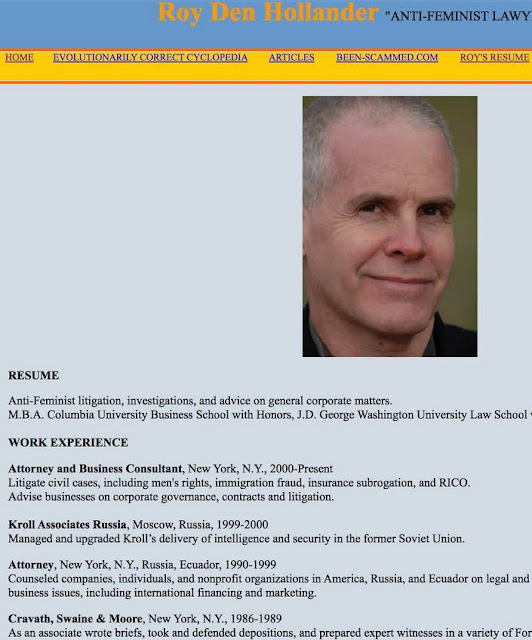 The minute I heard about this I knew they'd serve up a right-winger as a patsy. And lo and behold meet "Anti-Feminist Lawyer" Roy Den Hollander. But do yourself a favor and take a good look at his resume there: if that doesn't scream "spook" at you, you're probably here by mistake. I mean, it even says "intelligence" right there in his Kroll entry.

Also make note of the Cravath gig. So what are they playing at here?

Yeah, I'd say look for this story to get deep-sixed once the Twitter Two-Minute Hate over MRAs dies down. Last I looked his name was about to fall off the trending chart. 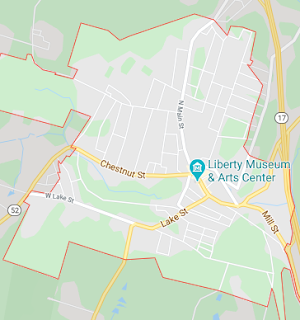 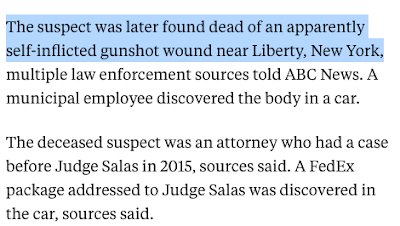 The suspected gunman apparently shot himself (as they always seem to do) way the fuck north in Liberty, NY, deep up in the Catskills. Believe it or not, another old friend of mine hails from there. I've been up there, it really is the middle of nowhere. Note Route 17.

A community of jazz musicians who worked at Borscht Belt resorts like Kutsher's and Grossinger's used to live in the area, but as far as I know those places are all mostly for Haredi now. So what the hell was this guy doing up there? Did he convert? 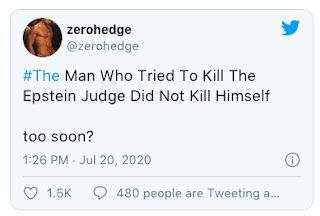 Not only is it not too soon, I'd even ask if this guy is actually dead. He got fingered for this almost as soon as the story hit the wires and was already conveniently suicided. Given his resume, I wouldn't be so quick to assume anything here. 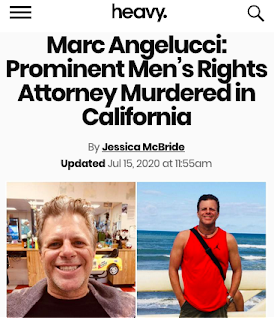 There was another MRA attorney murdered out in California earlier recently. I don't know what the hell that means, but it's a very odd coincidence. 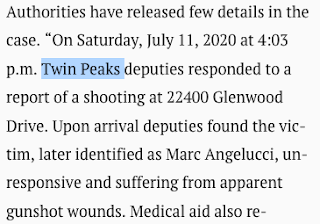 Especially given the municipality this cat seemed to live in before he got iced. 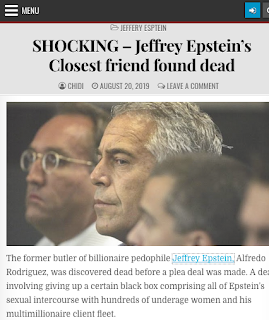 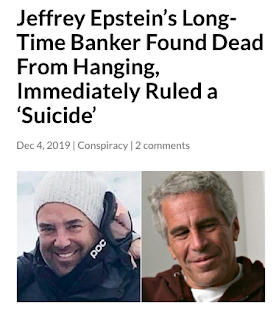 Of course, having any connection to this case is a very dangerous occupation. We've already seen Epstein himself iced in the pokey, as well as the suiciding of his personal butler and his personal banker.

Ghislaine, if you're reading this I'd just like to advise you not to put any money down on a slot at a retirement community. Maybe live it up a little. You know, while you still can. If you get out of the big house, I mean. 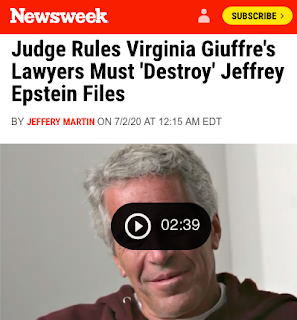 The day before Ghislaine was busted a Judge ordered all of Virginia Giuffre's evidentiary files destroyed, because destroying evidence in an ongoing legal action is totally normal now. And how about that timing, eh? 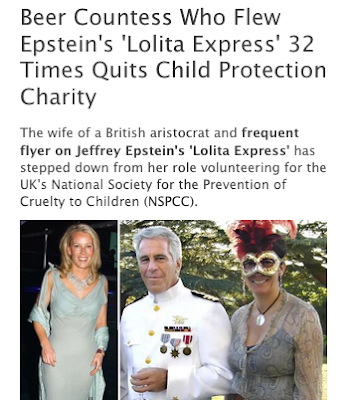 And the hits keep coming: Clare Hazell, the Countess of Iveagh (wtf?) who flew on Epstein's Lolita Express a whopping 32 times has resigned from her position at a UK children's charity.

All of which is to say if you're wondering why grooming gangs are allowed to run amok in England, I seriously doubt it's because the cops were worried about looking racist. I think maybe someone should take a good look at all these "children's charities" and how they might be involved.

I probably don't have to tell you that most charities, foundations and NGOs are provable scams designed to facilitate tax piracy and money laundering, but it would be nice if the general public eventually got the message. 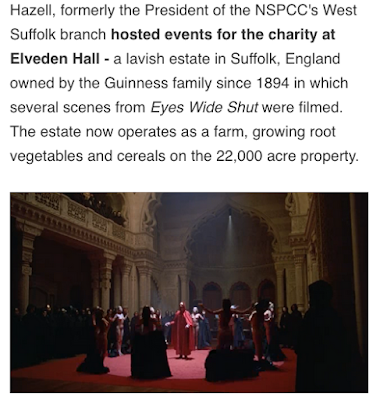 And just because we live in a broken reality construct, do note that this drinking buddy of Epstein and Ghislaine used to host children's charity fundraisers at the same estate where Eyes Wide Shut was filmed. For real.

You seriously can't make this shit up, which is why writing fiction is such a tough job these days. 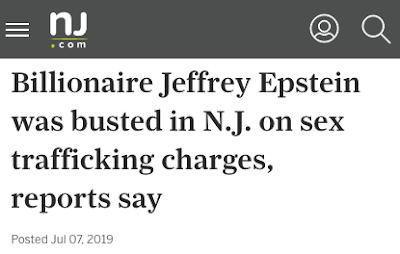 But so much of this story has a very weird flavor. A weird New Jersey flavor, that is. Epstein got nicked at the Teterboro Airport, which apparently is a whole other story. 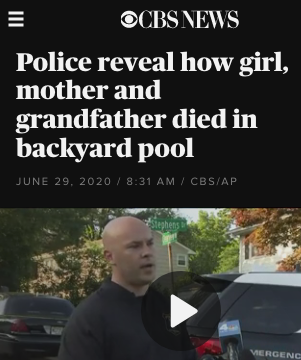 Knowing the area, the first thing I thought about when I heard about the shooting at the Judge's home in North Brunswick was the extremely strange story of a family all drowning in their small, above-ground pool. 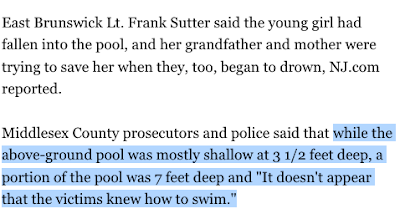 The story them came out that a "portion of the pool was 7 feet deep," even though we hadn't heard anything about it having a deep end before. In fact, investigators were so puzzled by this tragedy that they were looking into the possibility that they were electrocuted. 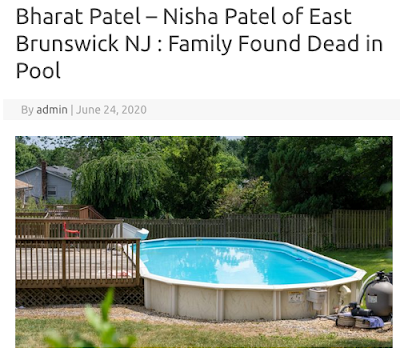 And as you can see here this pool is tiny, and doesn't seem to indicate a deep end in this picture, at least. It looks as if it's partly inground, but given the lack of a ladder I can't rightly guess how inground it is. 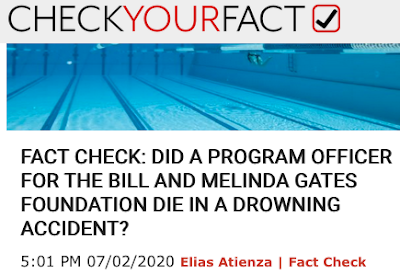 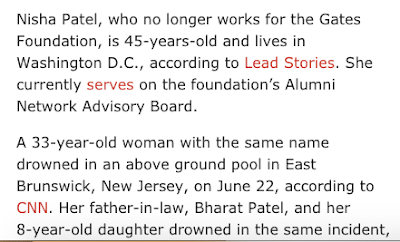 And then there was this weird addendum; a woman with the same name as one of the drowning victims was an executive for the Bill and Melinda Gates Foundation. Note the victim was 33 years old. I don't know what to make of this, but it's certainly a very weird coincidence.