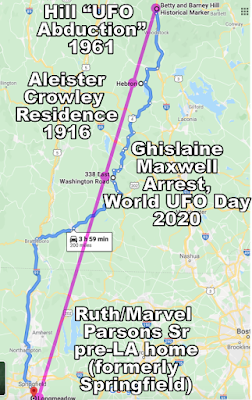 2020 has been a very weird year and July has been a particularly weird month.

It started with Ghislaine Maxwell getting busted on World UFO Day, and as hard as the media is working to keep a lid on the boiling pot, it looks like things have been rapidly unraveling all over the damn place. 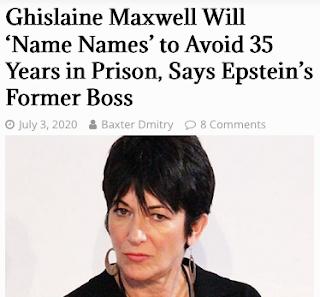 This is a very odd and very specific alignment and raises a lot of interesting questions, given some of the facts surrounding the case. Helpful Hint: Never assume that people in these circles A., don't have weird beliefs and B., don't have the resources to act on same. 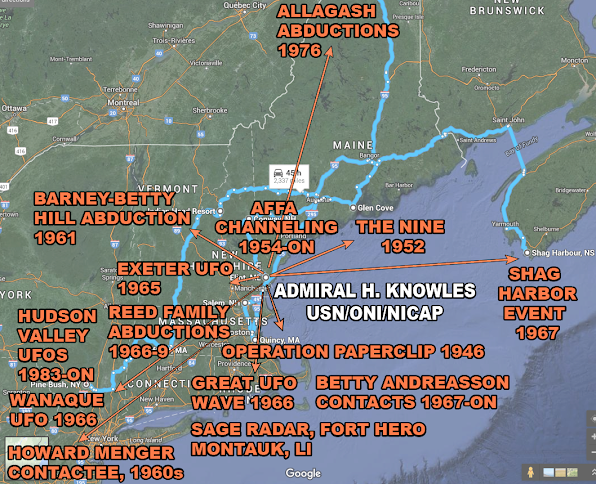 We also looked at the strange phenomenon of some of the greatest hits in the UFOlogy songbook going down in the general vicinity of one Rear Admiral Herbert Bain Knowles, who was not only a NICAP board member but brought both alleged UFO channeler Frances Swan and alleged UFO abductees Betty and Barney Hill to the world's attention. How this plays into Ghislaine's bust in that same vicinity on July 2 is another question altogether.

Even so, guess what just happened in that same general vicinity? 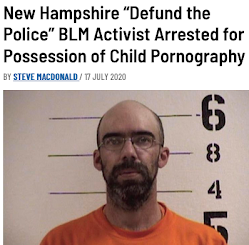 A local government official aligned with Black Lives Matter was busted for the ol' Chuckie-Cheese (depicting several different underage girls), as well as on some endangerment beef. 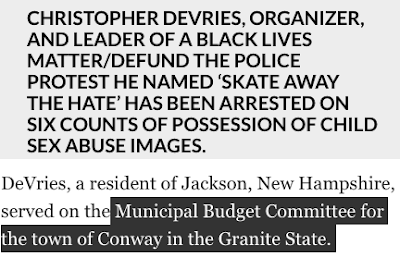 Well, aside from the timing of the bust, that handsome chap there was a budget something-something (or whatever the fuck) in Conway, NH.

That ring any bells? It should. 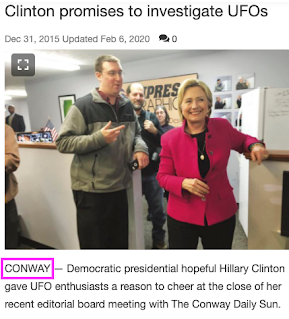 Conway was where Hillary Clinton made her very widely-publicized pledge to investigate the UFO issue in 2016.

Why she picked Conway-- a tiny little burg in the middle of absolute nowhere-- to make this announcement is beyond me. But maybe it was a ritual thing, like maybe how Ghislaine picked Bradford. Maybe they know something we don't. 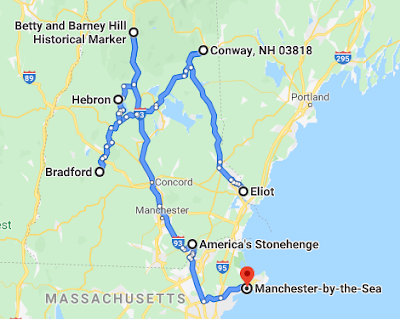 Have a look at that map there and see if anything springs to mind. Do note that UFO celebrity, Commander David Fravor (of Tic-Tac video fame), also lives within that same general area (near Mystery Hill AKA America's Stonehenge, in fact). 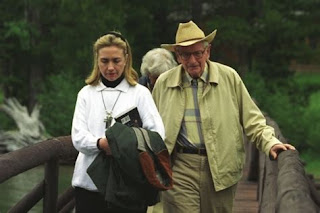 This was bigger news than it should have been, seeing Bubba did the same thing back in the 90s. He did so at the direction of his patron Laurence Rockefeller, who was bankrolling all kinds of UFOlogical pursuits before his death.

This pic-- taken at the Rockefeller ranch-- caused a big stir on UFO-type sites back in the day, as it had Hillary carrying Are We Alone? by Paul Davies, a book on aliens given to her by Rockefeller.
But in this case with the 2016 pledge, Hillary did so on the advice of her campaign director, John Podesta. Don't know if he was at the Conway Daily Sun with Hillary when she made the announcement, though.

Maybe he just spent the day catching up with some old friends in town. 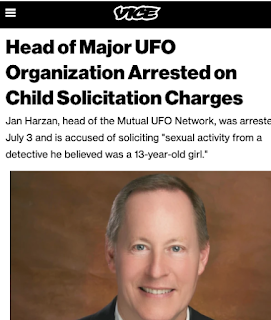 Doubt he'll be catching up with Jan Harzan anytime soon, since the MUFON head's got pinched on a kiddie beef. Harzan's tenure at the organization has been pretty rocky, with a couple of his regional supervisors getting in hot water for saying offensive shit on social media.

For those who don't know already, MUFON is basically just a low-rent data-mining operation. They collect reports from the public and then slap a copyright on them-- meaning that by filing with MUFON, you surrender your rights to your own story -- so they can exploit them for TV shows (like the short-lived Hangar One) or whoever else gullible enough to buy them.

So like my grandpappy always used to say: fuck MUFON.

But still: Ghislaine pinched on UFO Day in Backwoods Nowhere, NH, Jan Harzan busted allegedly trying to molest a tween the next day, then some random alleged pervo busted in another NH backwoods nowhere where Ghislaine's bestie Hillary Clinton made her UFO pledge at the urging of John Podesta, known in certain circles as "Podesta the Molesta."

I'm not making making any assumptions as to the guilt or innocence of any of the subjects here, but does all this strike anyone as being a little odd?
Then a few miles down the road this whole Wayfair thing blows up. Again, I'm just telling you what's what and not making any claims or judgements, but this caught my eye; there's a Rachel Chandler listed as a recruiter at Wayfair. Coincidentally or otherwise, Rachel Chandler was also the name of one of Epstein and Ghislaine's alleged recruiters.

Random chance or is Ghislaine singing for her supper down in the Big House? You tell me.

Then we had the mysterious drowning death of Naya Rivera, whose body was plucked from the depths of Lake Piru on the anniversary of co-star Cory Monteith's OD death. Rivera was the former girlfriend of Mark Salling, who allegedly committed suicide before he was set to begin a rough bit in state prison for the Chuckie. 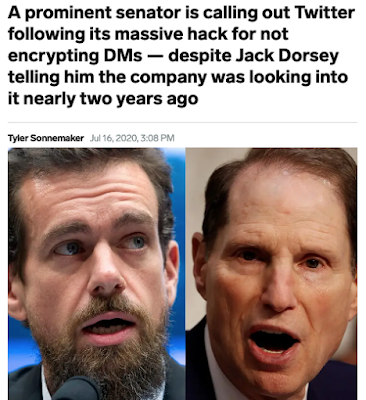 Then there's big Twitter hack. It's all looking like a really big deal, one that the company and their media subordinates are working like the Devil to keep a lid on. At issue is the fact that the hackers seemed to have gotten into the direct messaging system, which might end up causing all kinds of important people all kinds of problems.
The hack also revealed, that contrary to sworn testimony, Twitter does ban and suppress people for expressing politics Twitmods don't like. Gosh, that was quite an unfortunate hack for the Bluebird bunch. 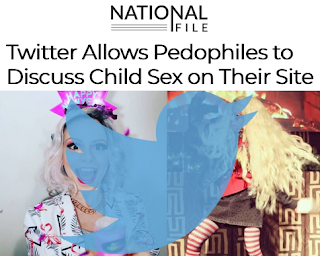 This might also shine a spotlight back on the fact that Twitter is quick to ban any political speech they don't care for but not so quick at all to ban pervos from talking openly about their molestation plans.

Having the media in your pocket helps, but for some figures of the new ruling class, discretion and mass blocking algorithms are a better bet.

Case in point: Chrissie Tiegen -- who is famous for reasons utterly opaque to this writer -- just deleted a shit-ton of tweets and blocked a million members the other day, allegedly for "her family's safety." (A spin on the "want to spend more time with my family" routine?)

But some of the tweets in question might suggest that other folks might need to be concerned for their family's safety.

Mind you, I don't want to make too much of this: sick, "edgy" humor was a thing in the previous decade. Even so, it makes her denials of Epstein/Ghislaine links just a little bit harder to swallow. 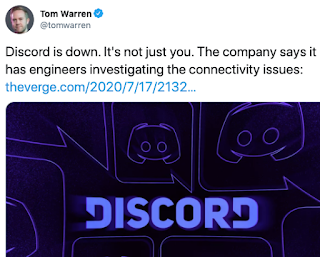 Then, to cap it all off, Discord suffers a system-wide shutdown. I've heard rumors Discord is used by some unsavory types to discuss unsavory topics but nothing I can really impart to you at the moment. I'd sure appreciate it if you could drop some of that information in the comments.

I'll tell you, I personally am sick to death of all these people are their sicko signaling. I'd have ignored it had it not all wandered into my backyard, what with the UFOs and Lovecraft and whatnot.

Sadly, I think rich sickos being more and more open about their sickness is just a reality we're going to have to get used to as we drift into the new Technofeudal nightmare-dystopia.