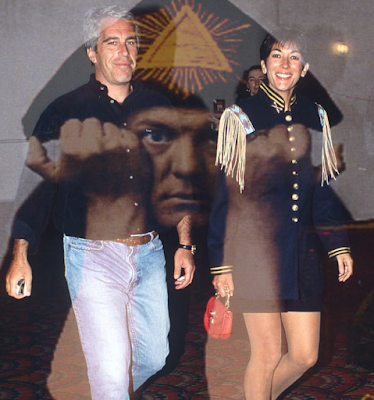 OK, you've heard the news by now and you can get the lowdown at any number of outlets. You don't come here for the news of the day, you come here to get your fix of "WHAT THE FUCK?"

And believe me, we got a LOT of that in store.

This might be one of the craziest things I've ever posted.

If you need a refresher, here's an excerpt of the press conference, with the basic information. It turns out Ghislaine wasn't in Paris or under the Antarctic ice, she was in New Hampshire. Where she'd been spotted last year:

Ghislaine, 57, was thought to have been staying at the property owned by Scott Borgerson, in Manchester-by-the-Sea, Massachusetts for some time but has not been seen in the area for several weeks amid intense scrutiny... 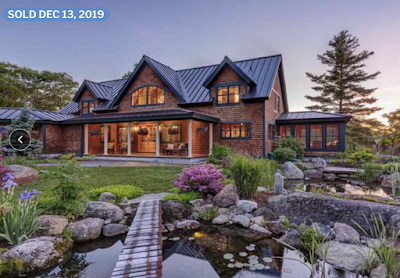 Ghislaine bought this cozy little cabin with cash (upwards of $2 million dollars) and had been under surveillance for quite a while. And this morning, the long arm of the law nabbed her saggy ass and tossed it into the pokey down in Manchester. 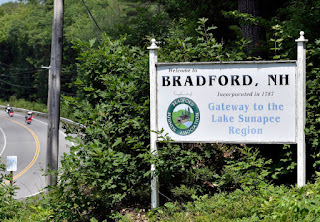 Ghizzy was shacked up in Bradford, which makes Mayberry look like Times Square. Nice place to hide out, but maybe buying a house with cash wasn't the smartest idea she's ever had.

Ghislaine is no dummy by any stretch, but come on. Why didn't she just burn "I'm right here, bitches!" in 20-foot letters in her front lawn? 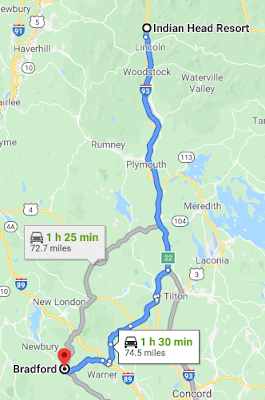 But being familiar with New Hampshire as I am, I recognized that Ghislaine's safe house was just a short skip down the road (LOL at people in rural NH taking an hour and a half to drive 74 miles) from Indian Head Resort in Lincoln.

So what's the significance of this? 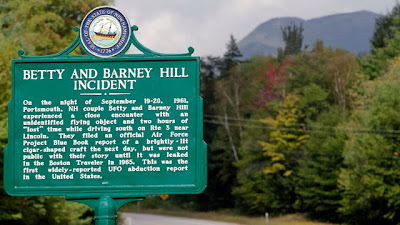 
Just south of the Indian Head resort, the Hills stopped in the middle of the road and said the silent, cigar-shaped craft hovered above their car. Through binoculars, Barney claimed to see several "strangely not human" figures at the object's windows. Fearing they were about to be captured, Barney quickly drove away.

The next thing the Hills remembered was that they were 35 miles farther along on their journey and approximately two hours had passed which they couldn't account for.


If you're not familiar with the case, watch this short clip and it will give you the basic bullet points.

OK, so Ghislaine was hiding out in some podunk town an hour and a half away. What could possibly be the connection to the Hill Abduction?

Well, Smarty-Pants, it just so happens that Ghislaine was busted on World UFO Day... 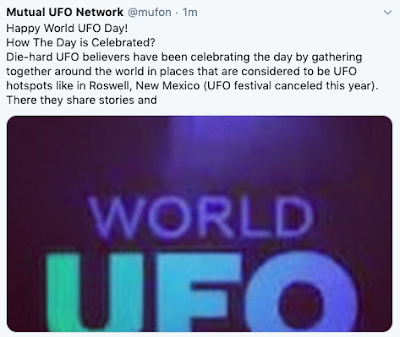 
On the evening of July 2, 1947, several witnesses in and near Roswell, New Mexico, observed a disc-shaped object moving swiftly in a northwesterly direction through the sky. The following morning Mac Brazel, foreman of a ranch located near tiny Corona, New Mexico, rode out on horseback to move sheep from one field to another. Accompanying him was a young neighbor boy, Timothy D. Proctor.

As they rode, they came upon strange debris -- various-size chunks of metallic material -- running from one hilltop, down an arroyo, up another hill, and running down the other side. To all appearances some kind of aircraft had exploded.

Midway between Ghislaine's digs and the resort where Barney and Betty Hill claimed to have been abducted by UFOnauts is a small town called Bristol, and an even smaller town called Hebron.

So what's the significance of all that? Glad you asked. 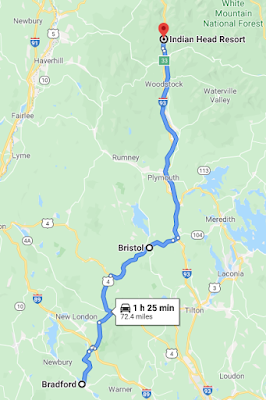 Why, Hebron is where none other than the "Wickedest Man Alive" spent his summer vacation in 1916... 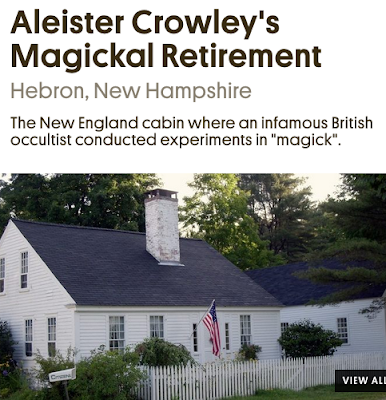 Crowley wasn't there alone; he was the guest of a famous astrologer. One who traced her lineage back to two presidents born in my old neck of the woods:

Between 1913 and 1918, Evangeline Adams owned the Jonathan K. Pike House, which was built around 1803 as a parsonage for the village church next door. This is the cottage where Crowley stayed during the summer of 1916. Although Crowley refers to the dwelling as “a cottage on the shores of Lake Pasquaney in New Hampshire” (Confessions, p. 806), it really isn’t on the shore.


In 1916, while living near Bristol, New Hampshire, Crowley promoted himself to the rank of Magus through a ceremony of his own devising. According to Richard Cavendish, (this) involved baptizing a toad as Jesus of Nazareth, then crucifying it.

Crowley also wrote a letter to The New York Times, complaining of a strange visitation in the form of ball lightning:

To the Editor of The New York Times:


I do not know whether globular lightning is a sufficiently rare phenomenon in this country to merit remark. Yesterday a globe of fire with an apparent diameter of about a foot burst on the floor of the middle room of a cottage here and within a few inches of my right foot. Curiously enough, no damage of any kind was done.

Dude had no one to blame but himself, if you ask me. 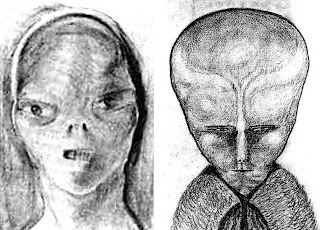 Two years later, Crowley would decamp to NYC, where he'd encounter a being not entirely unlike the Hills' alien abductors.

At the outbreak of WWI, (Crowley) returned to New York and moved into furnished rooms on Central Park West. Roddie Minor, a married woman living apart from her husband, joined him there circa September/ October 1917 and together they set about exploring the wilder shores of magica sexualis.

Under the influence of hashish and opium, (Minor) described to Crowley a series of archetypal visions involving (among others) a king, a small boy and a wizard who introduced himself as "Amalantrah"...

...the details are unclear, but it seems that some stage during the proceedings he underwent a form of contactee experience involving a large-headed entity now known to occultists as Lam.

Mind you, Crowley was less than an hour's drive from where the Hills reported to have been abducted by beings quite similar to the creatures Crowley would claim contact with in New York.

Even more remarkable is the fact that the highway that links Crowley's stomping grounds with the Hills' abduction spot is Interstate 93: 93 being the holiest of holies in Thelemite gematria:


The central philosophy of Thelema is in two phrases from Liber AL: "Do what thou wilt shall be the whole of the Law" and "Love is the law, love under will." The two primary terms in these statements are "Will" and "Love", respectively.

In the Greek language, they are Thelema (Will) and Agape (Love). Using the Greek technique of isopsephy, which applies a numerical value to each letter, the letters of both of these words when added together equal 93.

So, I hear you think, Crowley was half an hour or so down the road from Ghislaine's hideaway? What does that have to do with anything? Is there something that connects Ghislaine and Crowley in a meaningful way?

No, I'm afraid there isn't something... 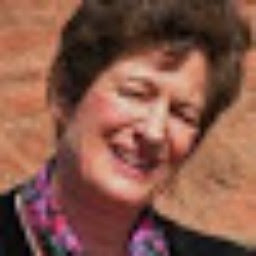 Christine Maxwell and her astrophysicist husband Roger Malina have, until recently at least, divided their time between their home here in Meyreuil and Dallas, Texas. Malina teaches at the University of Texas there and Christine is a doctoral candidate in the humanities department, a UT spokeswoman told The Daily Beast. Malina was also a director at an astrophysics center in Marseille until last year.

Roger Malina is the son of Czechoslovak-born Frank Malina, an early Elon Musk type who was part of the ragtag group whose daring rocket experiments in 1930s Pasadena led to the formation of the Jet Propulsion Laboratory in L.A., the precursor to NASA.

Frank Malina’s best friend, Jack Parsons, was the most charismatic of the group. He led a double life with non-scientist friends like L. Ron Hubbard and Robert Heinlein, author of Stranger in a Strange Land, Starship Troopers, and other sci-fi classics. Parsons also joined an occult group involving the dark arts and sex fetishes founded by Aleister Crowley, an English occultist and magician. 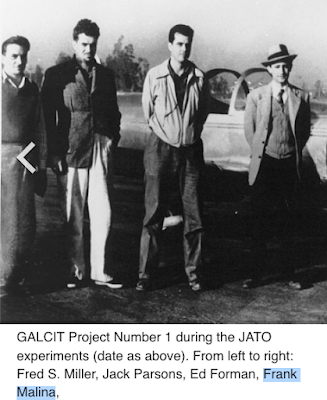 A primer on Jack Parsons, for anyone who hasn't committed all this to memory:


Born in Los Angeles, Parsons was raised by a wealthy family on Orange Grove Avenue in Pasadena. Inspired by science fiction literature, he developed an interest in rocketry in his childhood and in 1928 began amateur rocket experiments with school friend Edward S. Forman.

He dropped out of Pasadena Junior College and Stanford University due to financial difficulties during the Great Depression, and in 1934 he united with Forman and graduate student Frank Malina to form the Caltech-affiliated GALCIT Rocket Research Group... 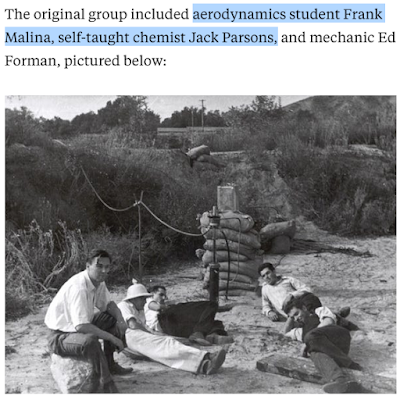 OK, what else do we know about Ghislaine's sister's father-in-law?

In 1935, while a graduate student at the California Institute of Technology (Caltech), Malina persuaded Professor of Aeronautics Theodore von Kármán to allow him to pursue studies into rocketry and rocket propulsion. The formal goal was development of a sounding rocket. Malina and five associates (including Jack Parsons) became known at Caltech as the "Suicide Squad" because of their dangerous experiments (and failures) when testing rocket motor designs.

Malina's group was forced to move their operations away from the main Caltech campus into the more remote Arroyo Seco. This site and the research Malina was conducting would later become the Jet Propulsion Laboratory (JPL)...

By late 1945, Malina's rockets had outgrown the facility at Arroyo Seco, and his tests were moved to White Sands Missile Range in New Mexico.

We searched near her dead mother’s estate east of here—and even at the bottom of a cliff in Saint-Cirq-Lapopie, a few hours from Meyreuil, where her brother-in-law Al Seckel, giver of TED talks on optical illusions, reportedly fell to his death in 2015 after he was exposed as a swindler in Los Angeles.

We also looked at the family tree of her other brother-in-law, an American astrophysicist whose genius rocket scientist father Frank Malina at the Jet Propulsion Lab in California pioneered what would become NASA before he fled to France with J. Edgar Hoover's G-Men on his heels.

For Ghislaine, presumably, outer space is not an option. 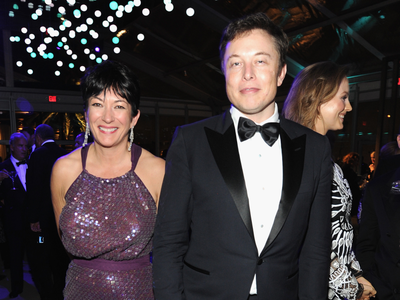 Yeah? You sure about that?

Well, there it is, folks. Either more proof reality is broken or that the world really is run by a bunch of insane, occult-obsessed technocrats. Or both. Minus 12, carry the 5, divide by x.

Mind you, I had no idea of any of this a couple hours ago, but in hindsight these connections may not have existed before that. You know how it is.

This is where we are now. Six Degrees of Jeffrey Epstein, straight over to Weird Ol' Aleister Crowley.  I should really expect it by now.