The Lighter Side of Apocalypse 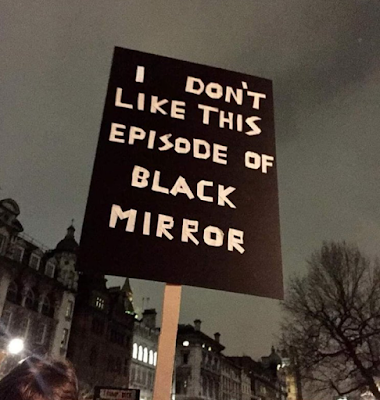 My head's kind of spinning at the moment and I really have no idea "what's really going on" with this thing. I could theorize all night and day but I'd just be whistling in the dark.

As you all know, I'm a big fan of "staying in your lane," so let's just do whatever the hell it is we do around here. 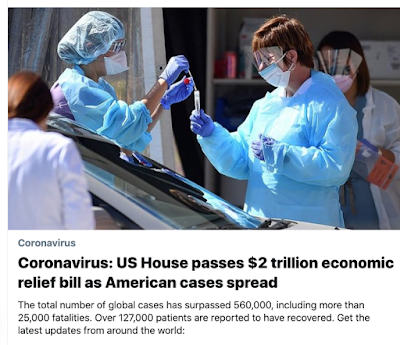 I'm pretty stupid when it comes to this whole "finance" stuff but I think it's safe to say that the world economy is undergoing a hard reboot at the moment and it's anyone's guess what waits on the other side. And we're probably going to be seeing all kinds of nasty toys taken out of the box and foisted upon us.

It was only a matter of time anyway, so try to take it in its stride. 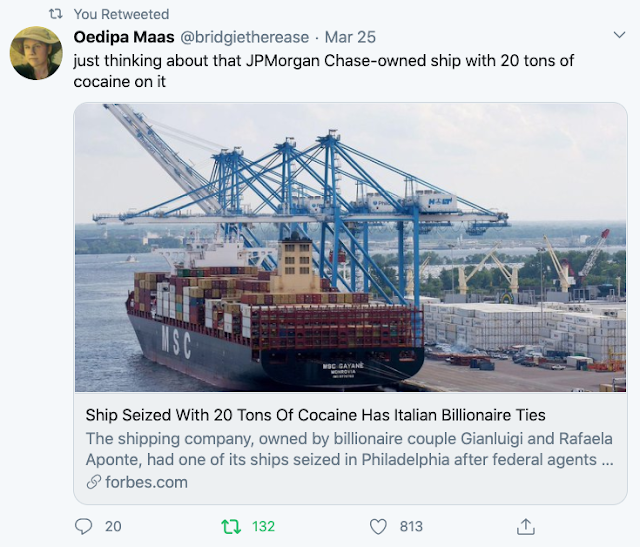 Good thing for some folks that everyone's worried about the C-to-the-V, otherwise they might have some questions about stories like this. 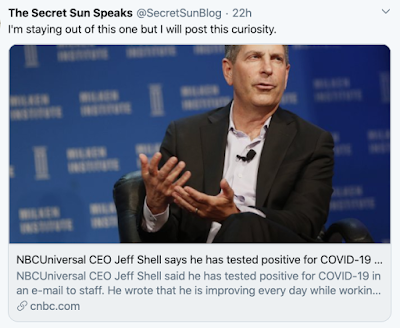 Yes, things are still disconcertingly odd under all the shouting. We're still seeing a lot of people who really shouldn't be coming down with this disease coming down with it. You'd think all of the limousines and private planes would shelter these people, don't you?

Strange path this thing is taking, don't you agree? 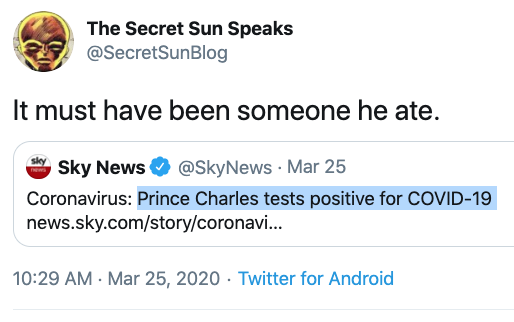 Hell, even Chucky Windsor has caught it. 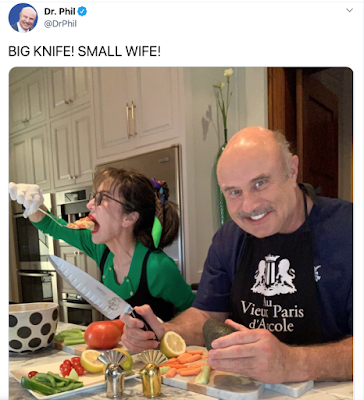 Celebrities don't seem to be handling being deprived of the infrastructure of fame and having to stream themselves on their phones.

Madonna, as one might expect, is taking it particularly hard. But there's also Dr. Phil going a little sideways now. I'm shocked he didn't do so a long time ago. 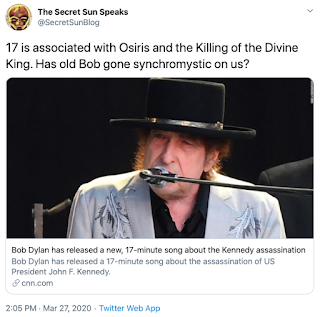 Then old Bob Dylan pops out of wherever he's been hiding and -- apropos of nothing in particular -- releases a 17-minute ballad on the assassination of JFK, which as you all know was not done by anyone with the surname "Oswald." Bob was never much for current events.

The QAnon folks are all ginned up over this and claim the 17 minutes are a signal to the Where We Go One set. Hey, for all I know it could be. It would make as much sense as anything else this year. 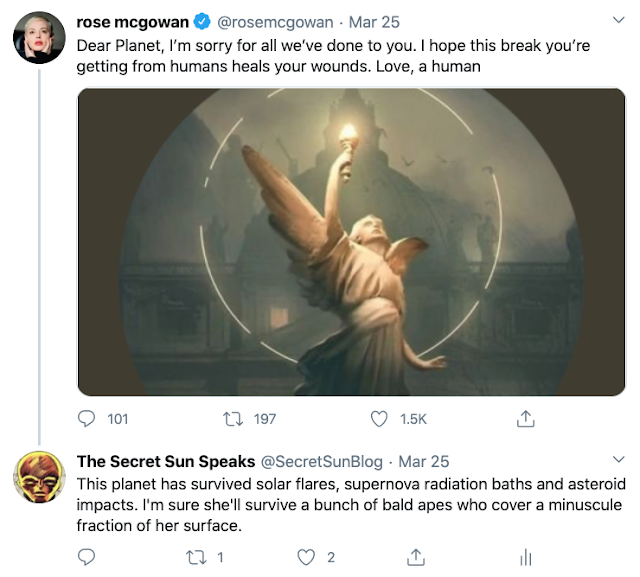 Rose "the Pearly Dewdrops" McGowan is enjoying Harvey Cumstain's string of calamities --and rightfully so -- but needs some tutoring on geology and prehistory. Hopefully, I helped nudge her in the right direction. 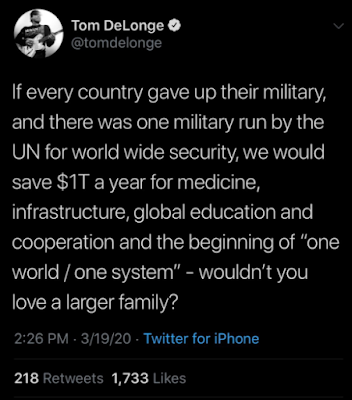 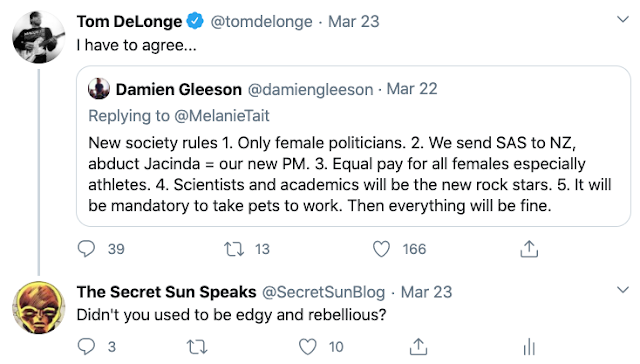 Tom DeLonge seems to be getting a bit antsy as well. He's been posting weird buy the world a Coke, Globalism a Go-Go boosterism on Twitter, for some unknowable reason.

As you know, this whole "Disclosure" boondoggle hasn't really gained a lot of traction. And now Bob Bigelow, who'd been pouring money into all these saucer-shenanigans, has essentially shuttered Bigelow Aerospace.

So maybe Tommy D is getting a little nervous about the balance sheet or maybe he's planting the seeds for something like this here... 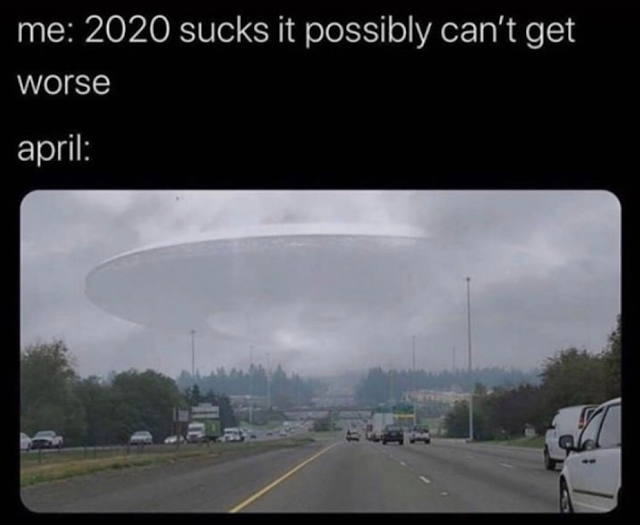 Again, makes a much sense as anything else, right? 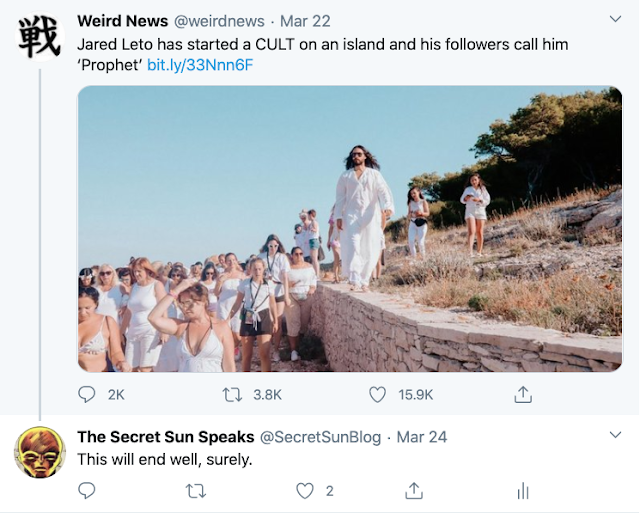 Certainly makes as much sense as Jared Leto waking up one morning and deciding he's Jesus.

I mean, we all know the guy had a big ego but we never dreamed it was THIS big. 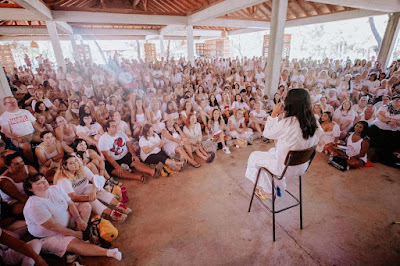 I don't expect any of this to end well, on account of 99.9% of cults never do. The fact that's dragging the faithful out to an island doesn't fill my heart with optimism either.

But I'm sure everyone will have fun while the typical cult honeymoon period lasts and the food doesn't run out. There are some folks in this photo who might have a special problem with that eventuality. 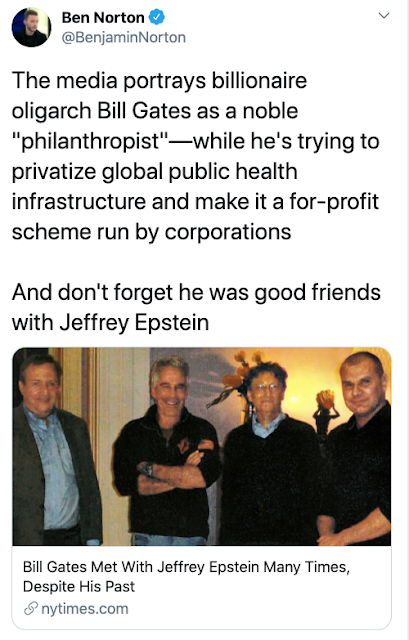 Plus again, I don't get a good feeling from these "islands." 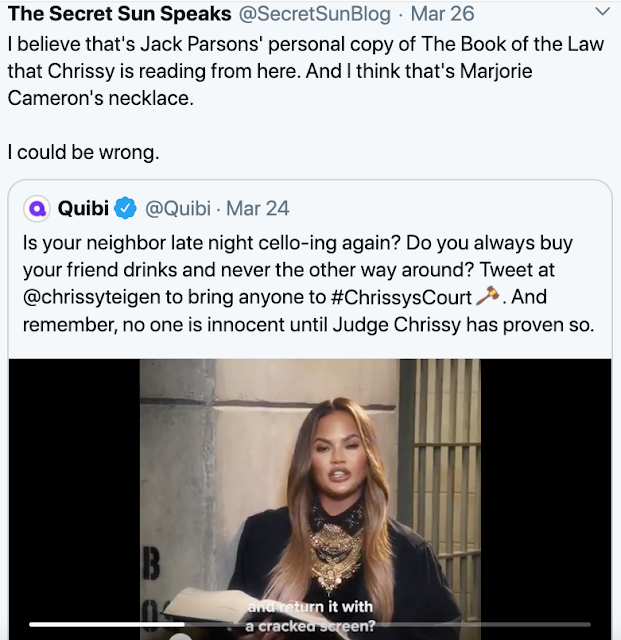 Speaking of insane people with troubling associations, famous-for-being-famous Chrissy Tiegen has set her ambitions a bit lower than Jared Leto. Chrissy doesn't want to be Jesus, she just wants to be Judge Judy.

Only without all that stupid "education" and "experience" crap. 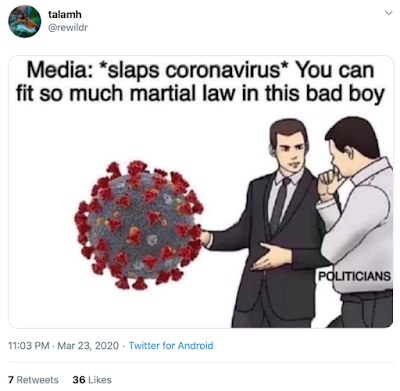 The way things are going, Chrissy will be presiding over the coming provisional military tribunals and summary executions.

You heard it here first. 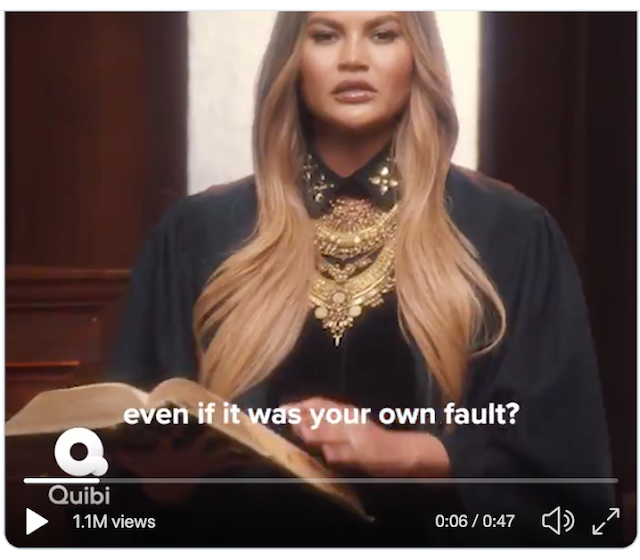 That necklace is really interesting.

Up close it looks like an abstract design but pulled back it kind of looks like this... 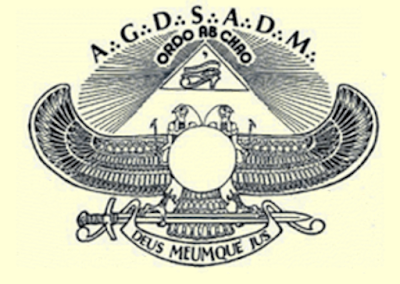 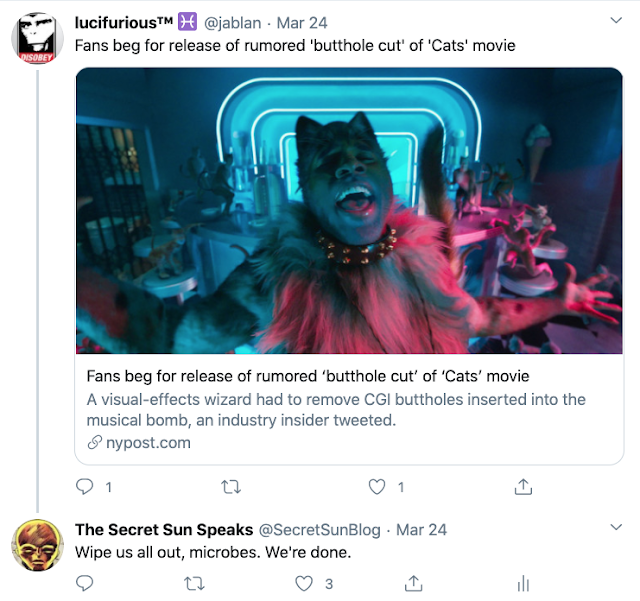 It's not just celebrities losing their shit lately, however. The Internet forever defeats already low expectations for depravity.

While we're on the topic of depravity, AgentLyle tweeted this story, proving once and for all that child molester-enablers and rape-apologists actually don't control the American film industry... 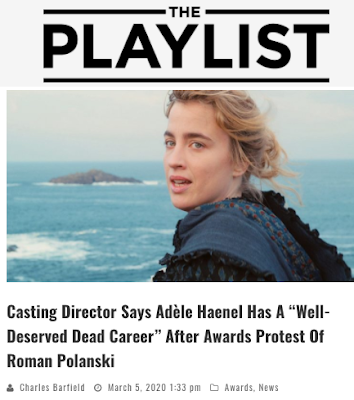 ...they control the film industry in Europe, too. You'll never eat pizza in this town again, Adele!

Speaking of the Internet, remember when I was talking about how absurd and contrived so many stories we're hearing from astronomers have been lately? 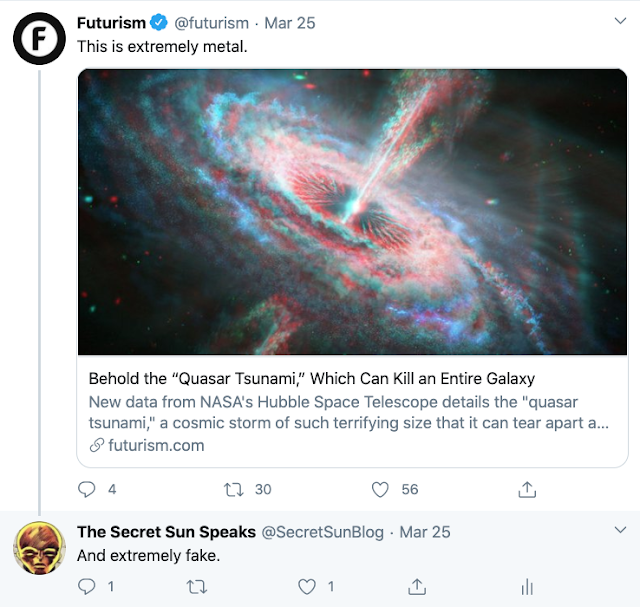 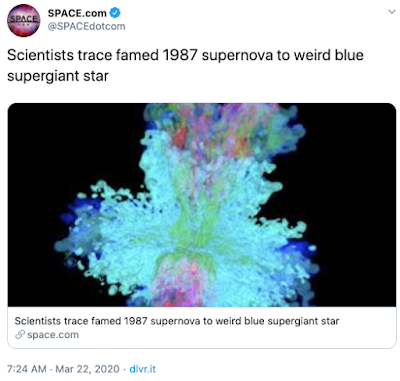 Kind of makes you wonder about this story, about our old friend SN1987A. Apparently Twin stars came together 179,000 years ago and created new cover art for Echoes in a Shallow Bay. 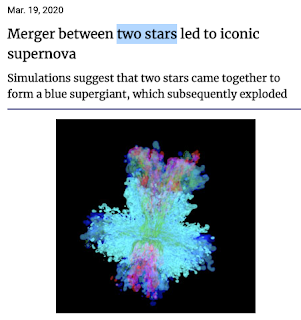 Or anything else in the catalog, for that matter. Maybe Victorialand, which was released a day after this story was published.

Weird that this story pops up that particular week, wouldn't you say? 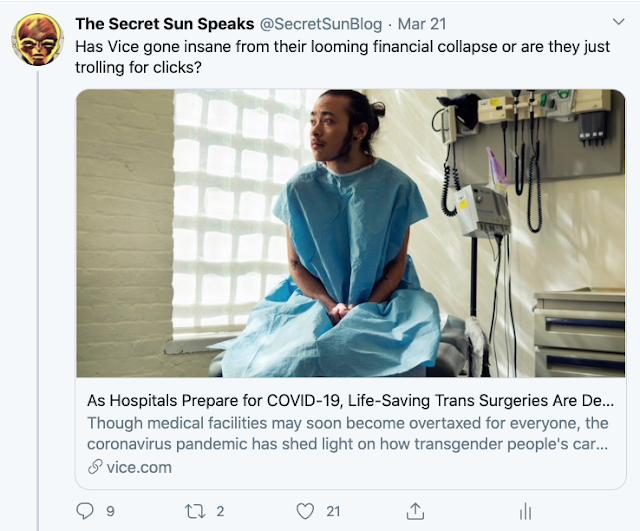 Meanwhile, rapidly-crumbling media empire Vice let's us know where their priorities are really at.

Clear out the intensive care wards! We got some genitals that need mutilating, stat! 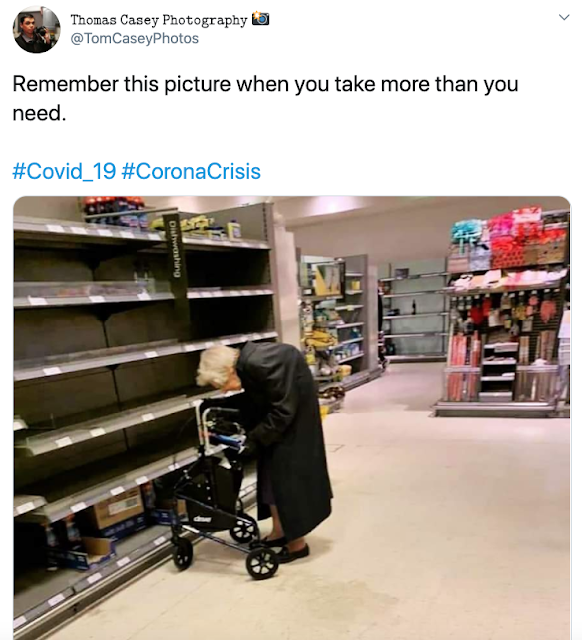 And this bullshit is what is going on in this world now.

Maybe we should all be wiped out for ever allowing something like this to happen. I'm kind of feeling that way this afternoon. 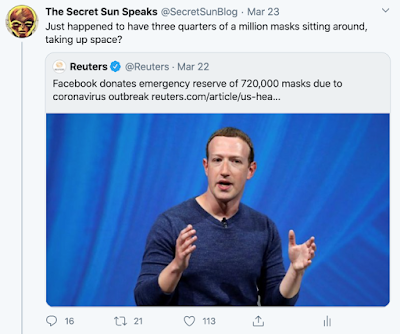 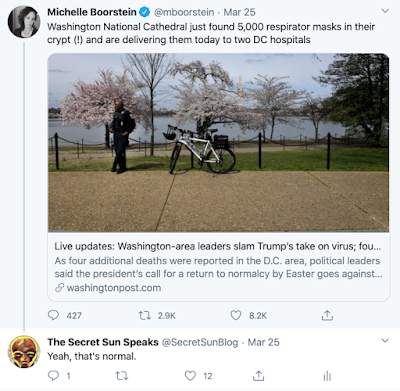 Then we have the strange phenomenon of companies like Facebook and Apple cleaning out their attics and discovering hundreds of thousands of face masks gathering dust in the corner.

Even the Washington National Cathedral found a few extras behind the communion wine. The scuttlebutt's that this was discovered by accident: a vicar was playing hide and seek with an altar boy in the basement and tripped over the box. I cannot confirm this at press time, however.

I just hope they sanitized the carton before anyone handled it. And used a blacklight to spy any stray pearly dewdrops they might have missed. 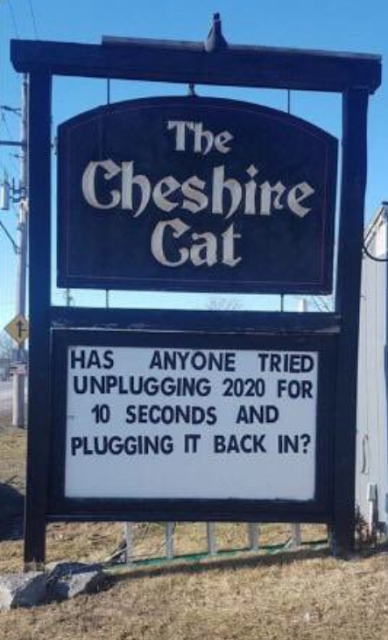 Sorry, we're taking this train all the way to the end of the line. Can't be helped.

Speaking of apropos of absolutely nothing, rarely has a band and a cover version been so perfectly matched. Curve should have done more covers, considering they weren't exactly paragons of consistency in the originals department.

Anyhow, I like to end things on an up note.