In a Samhain Supernova in the Sky

So the reason I want to prove that many of these ancient stories are describing star maps is that I want my Sunners to really familiarize themselves with the language I'm trying to speak here.

So we can fold all of this into the unfolding Secret Sun exegesis, a great deal of which is ultimately about, if anything at all, seers and scryers.

Because really, not to sound crude or anything, but who really gives a shit if this myth or that fable is describing a voyage through the stars?

My real question is what if these imaginary constructions-- constellations and asterisms-- are actually a kind of interface being used by human consciousness and a power outside of human consciousness to communicate potentially vital information in a language most people today have unfortunately forgotten. 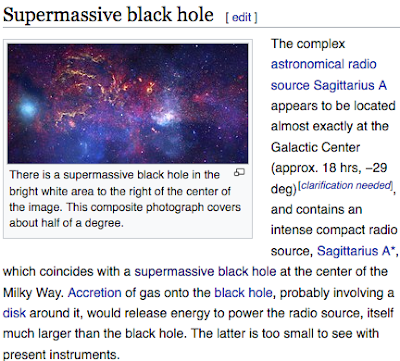 Now, we've only scratched the surface here but in my research I'm discovering a rather-shocking amount of interest in ancient narratives concerning the stretch of the Milky Way from Galactic Center to Algol, starting round about Scorpio.

A stretch of space that includes-- wait for it, now-- Lyra and Heaven or El Vega.

And seeing how it's a Supernova and whatever effect its cosmic rays may be having on us that that got me started on this fool's errand in the first place, I need to tell you that that same stretch of cosmic real estate has played host to a ridiculous amount of stellar violence-- black holes, supernovas, quasars, pulsars, blazars-- that many scientists believe may also have had a tremendous effect on life on this planet as well.

So my question then becomes has someone been trying to warn us about all this all along, which brings my interpretation of the Book of Revelation back into the fold.

I mean, think about it: if any troublesome radiation from a supernova or whatever is headed our way it almost certainly has been doing so for a very, very long time. Long before there was an Egypt. Or people, probably.

But before we proceed, let's look what Wikipedia has to say about the top cosmic radiation sources when it comes to impacting us here on Earth:

The Sun
As the nearest star, the Sun is the brightest radiation source in most frequencies, down to the radio spectrum at 300 MHz (1 m wavelength). When the Sun is quiet, the galactic background noise dominates at longer wavelengths. During geomagnetic storms, the Sun will dominate even at these low frequencies.

Jupiter
Oscillation of electrons trapped in the magnetosphere of Jupiter produce strong radio signals, particularly bright in the decimeter band.

The magnetosphere of Jupiter is responsible for intense episodes of radio emission from the planet's polar regions. Volcanic activity on Jupiter's moon Io injects gas into Jupiter's magnetosphere, producing a torus of particles about the planet. As Io moves through this torus, the interaction generates Alfvén waves that carry ionized matter into the polar regions of Jupiter. As a result, radio waves are generated through a cyclotron maser mechanism, and the energy is transmitted out along a cone-shaped surface. When Earth intersects this cone, the radio emissions from Jupiter can exceed the solar radio output.

Well, that should be a familiar list for Sunners when it comes to symbolism and ritual, wouldn't you say?


SETH THE CONTROLS FOR THE HEART OF THE SUN

But let's back it up and look at our old chum Set AKA Seth AKA Sutekh AKA Typhon again.

The bad rap Set gets seems by some accounts to date back to the Hyksos Dynasties of Ancient Egypt. The Hyksos were a Semitic nation that initially settled on the fringes of the Nile Delta and eventually came to rule Lower Egypt (in the north).

The Hyksos and the Egyptians got along OKish for a while but eventually the Hyksos were expelled by the native dynasty in Thebes. And being from the northern Levant where storm gods like El, Dyeus, and Ba'al were popular, the Hyksos had taken a special shining to Set.

So naturally, Set would find himself on the shitlist once the Hyksos pulled up stakes and mosied off back to Asia Minor.

The Contendings of Horus and Set could well be a legacy of the Theban-Hyksos Wars given the timeline but it could also have been a stellar narrative, the kind we often see curiously coincide with major doings down on Earth.

Be that as it may, Set was a pretty useful fellow since he protected Ra from Apophis while ol' Hawkeye was tooling around the Underworld --aka the Milky Way south of the Ecliptic-- every night on his little loveboat.

That little fact-- and my call that Ra's Barque is essentially Galactic Center-- let me to believe that Set is a compound god representing both Lupus and Lepus, which lie on opposite ends of the "Underworld." 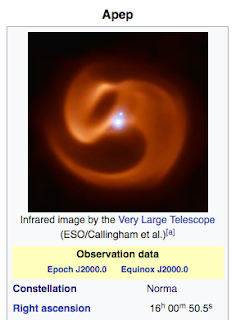 It seems my call was correct, since a big ol' spiral thingy in Norma-- which would have been seen as the fringes of Lupus-- was recently dubbed "Apep," the Egyptian word for Apophis. So someone seems to know something about all this.

Set's worship dates back to the Predynastic period so it's worth noting that there was a supernova (G306.3-0.9) in Centaurus -- which I believe is Apep's head-- thousands of years later around 400 BC.

Since none of these were recorded by historians in the Western Hemisphere-- and the Egyptians would almost certainly have recorded one of them-- it's worth noting the synchronicity here.

The exceptions include Taurus (AKA the Crown of Isis), Canes and Coma (the Whore of Babylon and immediate environs), Hydra (the Dragon that gives the Beast its authority) and the Ruddy Ruby Star, AKA the Pearly Dewdrops' Dropper. 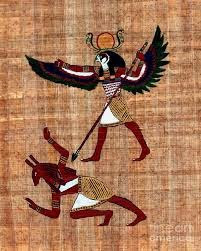 So I can't help but wonder, are we seeing the history of all this cosmic violence-- emanating from the head of Apophis all the way up to the Throne of Horus himself-- as a result that Set was slain and no longer protected the Stargate from the violence emanating from the depths ruled by Apophis? 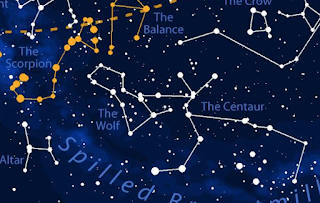 Now, I don't mean because some aardvark-headed wolf-bunny-man got his balls ripped off and then took one to the chest, I mean because of whatever cosmic something or other he might have represented is no longer there to keep all those stars from blowing up?

Just throwing that out there. On Earth as it is in Heaven and all that.

It should be noted that the three known supernova remnants coincident with Dynastic Egypt all took place within that stretch of sky beneath the Ecliptic between Lupus (the Body of Set) and Lepus (the Head of Set). Which is to say in Apophis AKA Apep.

Do note that the previous supernova before Set was known protect Ra's Solar Barque during the Predynastic Period took place in Cygnus, which stands right at the Gates of Heaven itself.

And in 2022, some believe we'll see a massive supernova of Twin stars in Cygnus again. This is particularly interesting to me since all present research points to Cygnus playing the role of the Archangel Michael, who in Revelation takes the place of Ophiuchus to do battle with the Dragon.

Ophiuchus, which formed that same Barque of Ra which in the Bible was supplanted by the Patriarch Jacob, whose very name means "to supplant."

Cygnus shows up again in Revelation but we'll get to all that later. 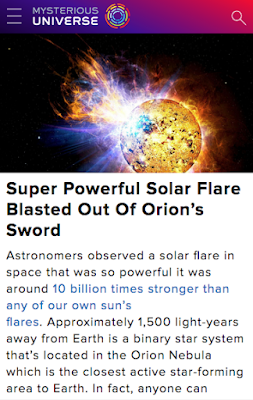 Meanwhile, it should be noted that a visible solar flare-- caused by Twin stars-- was seen in the constellation of Orion, home of the Nephilim and the String of Pearls. 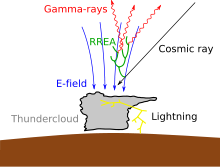 In this all seems like flippedy-floof to you, I should note that many scientists believe these cosmic rays we're talking about here are the causes of electrical storms here on Earth. Many others believe cosmic rays have actually changed the DNA of life on Earth in the past.

Before I forget I should add that a Twitter pal pointed to me to the fact that some kind soul re-upped the Robert Temple interview I've cited for years in which he claims that the Nommo are in fact hermaphroditic mermales.

Kind of explains a lot, don't you think? Hey, maybe we're getting all this prophetic information from the Nommo's satellite computer or something. Maybe that's the real VALIS. Now that would explain a lot.

Let me get out my maps and legends...

PS: Temple claims the androgynous Nommo mermales are in orbit around the Saturnian moon Phoebe. I thought it was Pandora for some reason.