Astronomy Domine: Eye Can See Everything 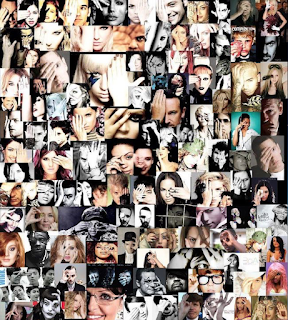 So you know the hundreds and hundreds of "one-eye shots" that you always see taken of celebrities on conspiracy sites? You know how the usual explanation seems to be that these are Satanists doing the "Eye of Horus" routine? As it happens, that may not be that far off the bat.

Why do I say that?

Well, it turns out that some scholars deciphered some old Egyptian texts and discovered that the Eye of Horus turns out to be Algol, of all things...

Read this if you don't believe me..


The real surprise is that Algol seems to represent Horus, an Egyptian god with ties to the Sun and embodied by the living pharaoh, and its period is connected to lucky days on the calendar. That sets Egypt apart from most other ancient cultures, which usually saw Algol as harbinger of evil.

Why? Perhaps for the same reason that Algol so unsettled astronomers from other cultures: its habit of seeming to disappear and reappear. That cycle would have mirrored Horus's cycle of death and rebirth, making the association pretty obvious. And in many early texts, Horus was associated with a star before his rise to prominence as a solar god. 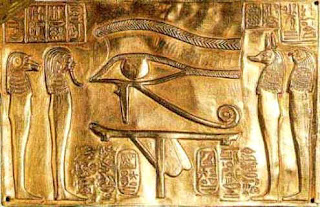 So given that the Egyptians pictured Algol up near the North Pole, it's a good bet that the Four Sons of Horus were the Solstices and Equinoxes. Which might have been assumed already but I can't be bothered to look it up on account of its frothing obviousness.


WE WENT DOWN TO THE RIVER 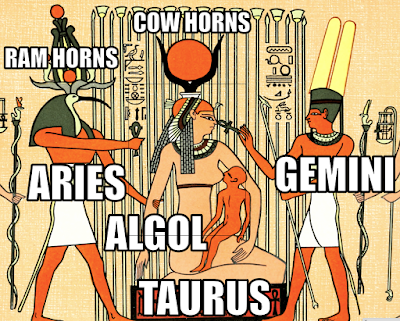 But in The Secret Sun's new "everything is a star-map!!!" OCD mania, we can probably decode most Egyptian religious art now, provided we get a grasp on their ever-changing star-maps and the decans and all of the rest of it.

But the nursing of Horus here is self-evident, providing you look at the constellations facing south from the North Pole. Here, try this.... 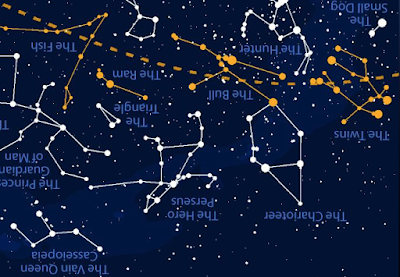 So seated Isis is Cassiopeia (Isis comes from the Egyptian word for "throne"), Baby Horus is Algol and Isis's head and/or headdress (depending on which myths you read) is Taurus. 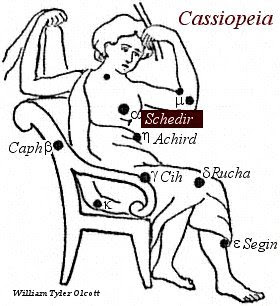 One of the stars in Cassiopeia is Schedir, or the Breast, hence the suckling of the mender there. 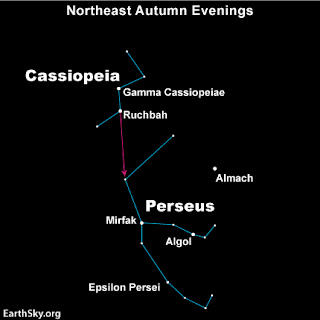 When Isis goes in the service of a foreign queen she is giving up her throne (the Babylonians reserved the northern constellations for the "Seated Gods").

The myth of Isis passing the baby Prince Dictys through the fire to grant him immortality is probably another reference to the waxing and waning of Algol, and the oven probably some reference to Mirfak, the brightest star in Perseus.

But Dictys is also Horus because myths kind of work like dreams when it comes to identity. And in the Greek myths, Dictys is a fisherman who gives shelter to Perseus and his mother Danae, who was probably Andromeda as well as Andromeda being Andromeda.

Yeah, read enough ancient mythology and you quickly come to learn why monotheism had such an appeal.

Syncretistic Paganism is loads of fun but it's basically the spiritual equivalent of that box of old cords and adapters you tucked away in the closet. Useful, but just try untangling the whole mess without losing your shit.

YOU SHOULD MEET HER SISTERS

Just because you're not confused enough already, this little yarn here is almost certainly a variation on the Isis-Dictys story as well.

In some texts, Isis travels among humans and must seek their help. According to one such story, seven minor scorpion deities travel with and guard her. They take revenge on a wealthy woman who has refused to help Isis by stinging the woman's son, making it necessary for the goddess to heal the blameless child.Isis's reputation as a compassionate deity, willing to relieve human suffering, contributed greatly to her appeal.

And how does Horus repay his mother for all her kindness? Just like you'd expect; he cuts her head off.


Isis continues to assist her son when he challenges Set to claim the kingship that Set has usurped, although mother and son are sometimes portrayed in conflict, as when Horus beheads Isis and she replaces her original head with that of a cow—an origin myth for the cow-horn headdress that Isis wears. 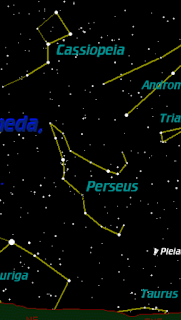 Of course, this is all more stellar tomfoolery and monkeyshines: Isis is the Throne AKA Cassiopeia, Horus is Algol and probably Perseus, which are seen above Taurus--the Head of Isis-- as it rises on the horizon. So Horus is separating the head of Isis from her body. 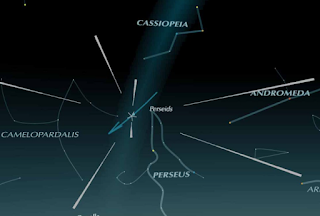 And the wounded Eye of Horus bit? I'm thinking it's the Perseid meteor showers. How's about you?

Another important episode concerns mutilations that the combatants inflict upon each other: Horus injures or steals Set's testicles and Set damages or tears out one, or occasionally both, of Horus's eyes. Sometimes the eye is torn into pieces.

Of course, Thoth fixes Isis's head problem and Horus's eye issues since he-- or at least one of his incarnations-- follows Taurus and Algol in the Great Circle of Life.


Wait just a minute, OK? Jeez. Go make yourself a coffee or something.


OK, Eye of Horus, square root of five, carry the two, multiply it by the cosine of the hypotenuse...


...shinbone connected to the kneebone... 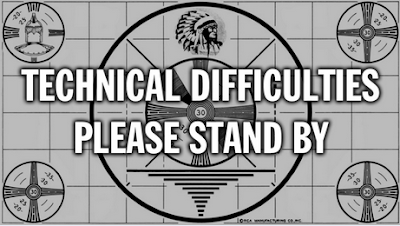 Oh, that's right: The Eye of Ra is ANOTHER FRICKIN' STARMAP.

Let's show our math, shall we?

OK, the ginormous nebula at the intersection of the Ecliptic and the Galactic Plane -- or Galactic Center-- has long been compared to a giant Eye in the Sky. I could be wrong, but I think that's the origin of the term. Don't quote me on that, though. 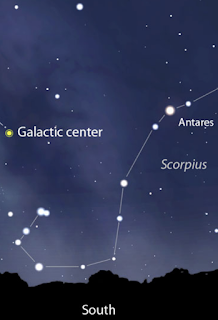 And what do we have here? A little curlicue sticking out smack dab in the middle of the Milky Way there? Cute, no? 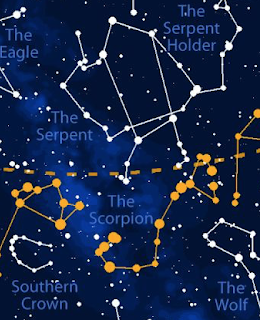 And what's right above that little curly tail there? Why it's our old pal Ophiuchus AKA The Serpent Holder AKA Serpentarius AKA Asclepius AKA Jake the Snake. 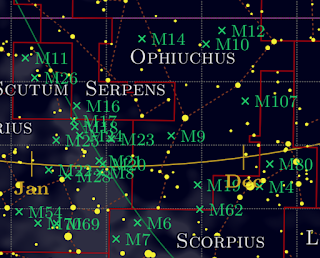 Ophiuchus and his Twister-buddy Serpens are not only at Galactic Center, the Celestial Equator runs smack dab through ol' Snake-Handler's head as well.

Just so you know, the bit about snake handling in the Gospel of Mark is a reference to this bit of cosmic real estate as well. Don't get me started on that, though. We'll be here all day. 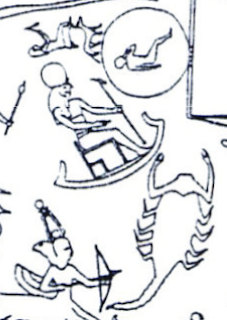 In the Dendera Zodiac, Ophiuchus is the Barge of Ra, which ol' Hawkeyes uses to mosey on up to Heaven (aka the North Pole). Note Horus the Child in the womb there and ol' Stingy-Pants crawling up Ra's ass there. 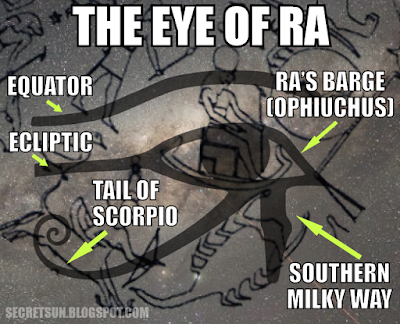 Speaks for itself, no? Sure, the Egyptians took a wee bit of liberty with the spacing here but pretty damn solid work considering they were just eyeballing all this stuff. 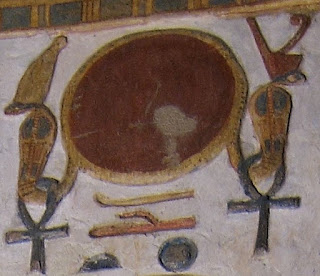 But someone else seems to have seen the bow and stern of the Ra Boat as serpents, going by this icon here. Maybe it was Moses.*

And sure enough, the Eye of Ra and the Eye of Horus align quite handily across the Ecliptic. Which makes this well-known icon of Horus the Child yet another variant on Ophiuchus, which spells out what the other characters are meant to represent. This is kind of a star map but one in the context of a calendar. Which as these things do, starts in the month of Thoth just prior to the Flooding of the Nile.

It also explains the Flight Up the Nile from Set...

In the developed form of the myth, Isis gives birth to Horus, after a long pregnancy and a difficult labor, in the papyrus thickets of the Nile Delta. As her child grows she must protect him from Set and many other hazards—snakes, scorpions, and simple illness.

OK, so we see Horus' birthplace is at Galactic Center (give or take) with all the Serpens and Scorpii crawling around. Who then is Set? 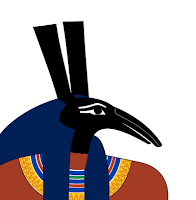 OK, who isn't Set is more the question. Set is two constellations and at least three different animals. But mostly he's Lupus and Lepus. 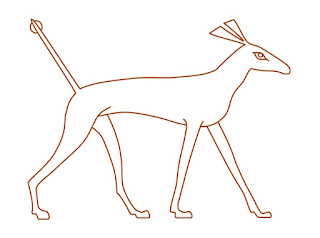 The "Set Animal" is a weird beast. It looks kind of like a dog-rabbit-deer-anteater CRISPR critter. But this just proves to me that his body is Lupus (the Wolf) and his head is Lepus (the Rabbit).

I mean, there are tremendous liberties being taken here. He's more dog-shaped (a Pharaoh Hound, specifically) and his head is more aardvark than rabbit but we'll see why shortly. 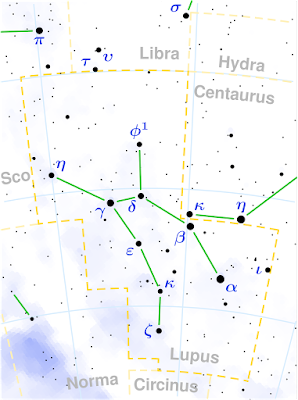 Here's Lupus. If you look hard it's not hard to see an anteater head there (ignore Centarus' incursion there). Lupus is also just below Scorpio, meaning just below Horus the Child in the Dendera reckoning. 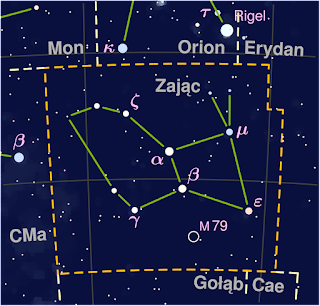 You have the same basic deal with Lepus, at least the eastern half of it. 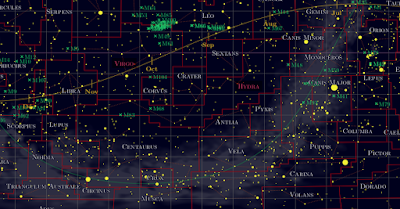 Lupus and Lepus are situated on opposite ends of the Underworld, meaning the Milky Way as it travels below the Ecliptic or Zodiac. 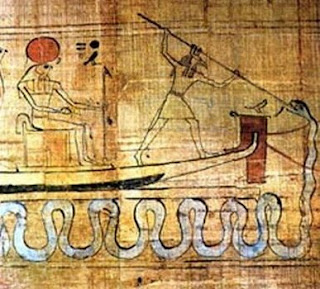 All of which jibes with Set's role as the protector of Ra's Barge against Apophis, who in this case represents some aspect of that same stretch of "underworld" Milky Way.

So in this case, Ra's Barge or Ophiuchus is just northwest of Set or Lupus who protects Ra from Apophis.

Set lives in the Wilderness, which again describes the sky off the Ecliptic and Milky Way. 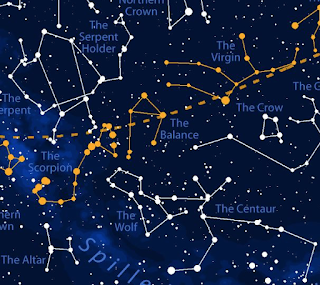 The head of Apophis here would be Centaurus, who is the Fourth Horseman (Death) in the Book of Revelation.

And given that Set's Egyptian name Sutekh is believed to mean 'Pillar' or 'Dazzle', which could describe both an interpretation of Lupus or its antecedents or as Set's role as a pillar of protection against the dreaded Apophis. "Dazzle" is self-explanatory. 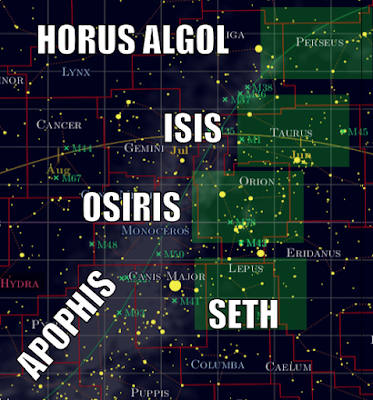 Moving east then we see Set on protecting the gods from Apophis' tail.

We also see Sothis as Sirius, Orion as Lord of the Underworld (meaning northernmost constellation below the Ecliptic) and you know the rest.

So what about the story with Set and his troublesome testicles then? 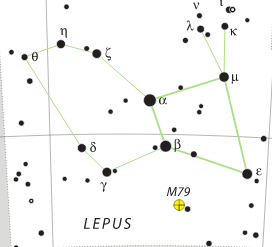 Hmm, good question. Maybe we should meditate upon this image while we scour our brains for the answer...


And just in case you didn't get enough Secret Sun Star-Lore, go check out my talk on the Book of Revelation on The Other Side of Midnight with guest-host Jonathan Womack.

* if you get that reference, you are old. And nerdy.