Roses are Red, Violets are Blue, It Never Ends.

Well, it's been nearly a year and a half since Soundgarden frontman Chris Cornell died on the Detroit River and there's been a never-ending rollercoaster ride of highly nutritious synchery ever since. And since timing is everything, we keep getting hit over the head with what I like to call the "emerging archetypal dominants" on account of it being the Great Unveiling and all.

So it's only natural that the Apollo Chris Cornell statue was unveiled today, and the festivities were bathed in an eerie glow of Violaine.

Concurrent with that unveiling we have the announcement that the Cornells are suing the late singer's former doctor for over-prescribing Ativan and other drugs to the singer. The suit claims that Cornell was prescribed 940 tabs in the past 20 months. To be honest, that doesn't sound like an over-dosing to me, since it averages out to a tab and a half a day. But seeing he was a recovering addict and there were also other barbiturates involved they may have a case. Stay tuned.

But still; the timing is very interesting in light of everything else popping up these days. Plus the inverse of 049. Chaplets seeing me drugged and all the rest of that jolly rot. 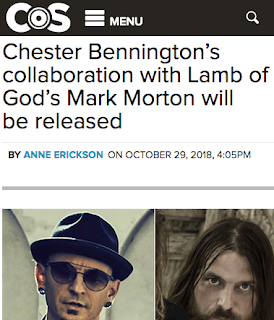 Three days before the Cornell events it was announced that a colloboration between the late Chester Bennington and Mark Morton of extreme metalists Lamb of God will be released.

Lamb of God is an interesting band in that their lead singer had been convicted and then acquitted of manslaughter for the death of a stage-diving fan at a 2012 concert in Prague. And of course the band's name is an ironic appropriation of a title given to Jesus Christ as the Paschal Lamb, or in common parlance, the sacrificial lamb. 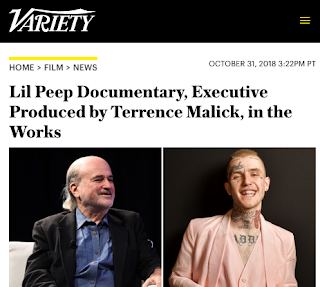 And out of absolutely nowhere it was announced that legendary director Terrence Malick (who directed one of my all-time favorite films, Days of Heaven) will be directing a documentary based on Lil Peep, who seems to be the focus of a major canonization campaign all of a sudden.

I can't even wrap my head around what would inspire a legend like Malick to make a film about a short-lived emo rapper but then again, the Sibyl never lies. 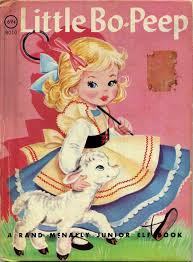 Eagle-eyed readers remember that Lil Peep's death was utterly drenched in Siren symbolism and in Sibyl syncs, not the least of which was the fact that he was born on the 12th anniversary of the release of an album whose very first word on the very first song on the first side is "Peep," a word which is repeated several times throughout.

That album was re-released this year on March 16th, which so happens to be the 22nd anniversary of the US release of Milk & Kisses, whose first single was "Tishbite," named after the familiar title of the Prophet Elijah. Lil Peep's middle name was Elijah. March 16th was also a more unhappy 22nd anniversary, as some of you may recall. 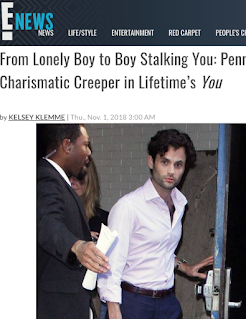 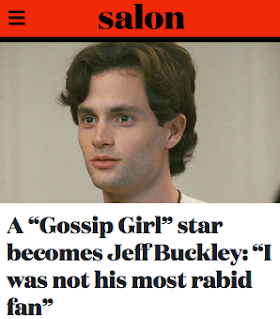 That same song was often covered by Jeff "Shepherd Boy" Buckley during his club days and the actor who once portrayed the late singer was named as the star of a new Lifetime series just yesterday.

The announcement was made on account of Jeff Buckley had to be injected into the news cycle somehow. I'm sure you understand. 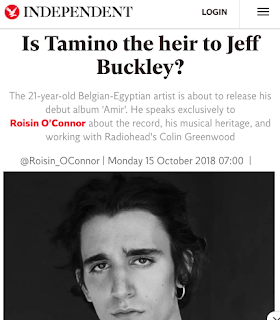 Earlier in the month, we saw Egyptian-born singer Tamino named as the new Jeff Buckley on account of Osiris and Antinous and the River Nile and the Libyan Sibyl and bla bla bla bla. You know the drill by now.

Note Jeff Jr. here is working with Colin Greenwood of Oxford's Orthodox Fraserfarian pop combo, Radiohead. Because of course he is. 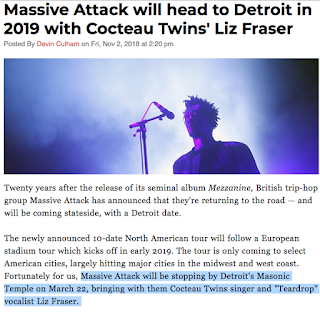 And then of course there's the very big deal being made for some inexplicable reason (hint: the Apocalypse) over Our Blessed Sibyl touring with Orange Appled Catholic Fraserfarian mentats Massive Attack, for the 21st anniversary (?) of Mezzanine. It turns out they'll be hitting Detroit in March. Where will they be playing? 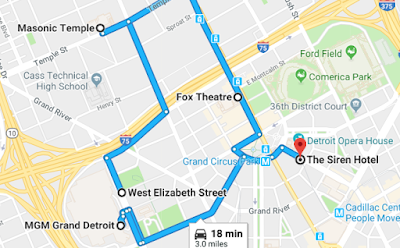 At the Masonic Temple, of course. Here's a handy map for out-of-towners.

Tickets for the European dates go on sale November 9th, or 9/11 for our friends across the pond. The tour will kick off at the Hydro in Glasgow. I believe that site was chosen because Revelation 12:15-17.
. 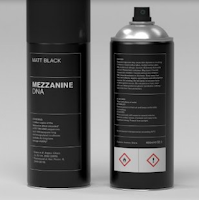 If you can't afford the tickets, you can always pick up a spray bottle of Mezzanine, the first record album to be encoded into DNA. Each spray contains one million Mezzanines. Because the world has gone completely batshit.

A reader kindly reminded us of Ubik, which I'm kicking myself for overlooking. Of course I believe-- rather I know-- that Our Lady is in fact the Sibyl that PKD was sensing the arrival of (hence the "Ysabel" and "Strawberry" business, plus Ubik) and there's not a shred of a whisper of a doubt that the great prophet himself would be even more around the bend and out of his head over the Sibyl's unerring oracles and unparalleled healing powers than even your helpful host here.

You know it, I know it, and unfortunately the Demiurge seems to know it. 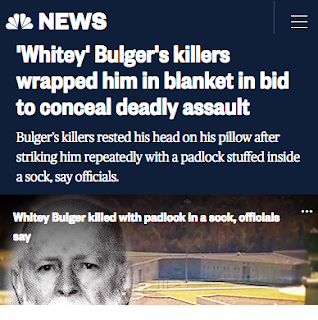 THERE IT IS THEN

Now, a lot of people have been asking me about the Whitey Bulger thing and what exactly I thought of it. Hmm, it's a good question. Let's have a look, shall we? 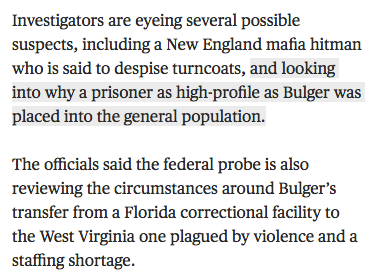 In answer to your question, I'm thinking pretty much exactly the same thing you are. 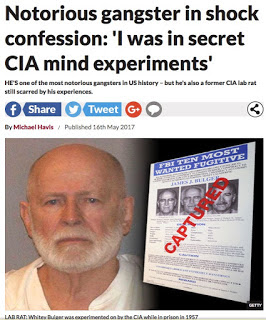 Don't forget this little detail. If you get a chance check out the Netflix documentary on Whitey. Quite an eye-opener. Especially the part where the witness gets iced during the filming. 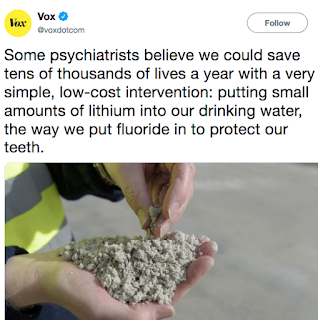 Speaking of MK Ultra. Which psychiatrists are those, Vox? The good folks from the Ewen Cameron Institute? Vox gives me mind cancer so I haven't a clue myself. 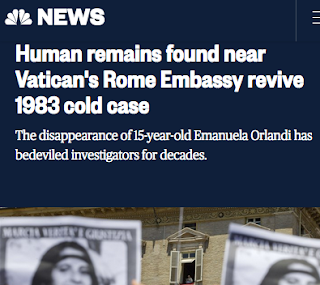 Here's a story for you-  the remains of a girl missing since 1983 is believed to have been found at the Vatican's Rome Embassy. Why does this remind me so much of the Khashoggi business? 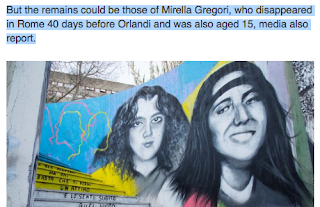 But it turns out it might be another teenage girl missing from the same time. Hmm, why can't I shake the feeling that Saint Malachy was right on the money? Not to mention Malachi Martin.

Emanuela Orlandi roughly translates into the "Famous Land of Christ." Which ironically describes the Vatican for some. Not me, but some. 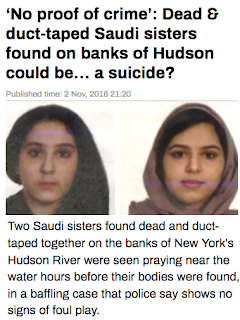 And then there's this bizarre story, speaking of that same Khashoggi business. And another two teenaged girls Twinned in tragic death. And this one on the (Katy) Hudson River, no less. Not sure exactly where yet.

I guess they duct-taped their own hands together. It happens. I mean, hey; people shoot themselves multiple times in the head and stuff their own dead bodies in gym bags, right?
Life is a rich and diverse tapestry of weird and unusual events. And so is death.

IT TAKES A VILLAGE TO BUILD THE APOCALYPSE 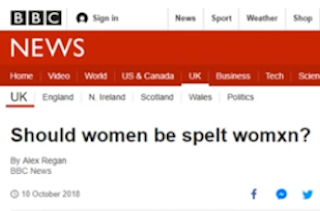 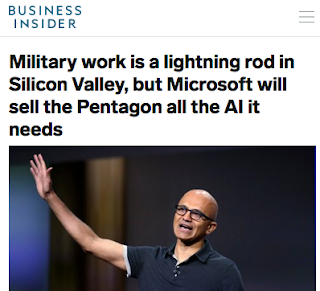 In a related story, donut-making is a lightning rod at Krispy Kreme. Details after the game. 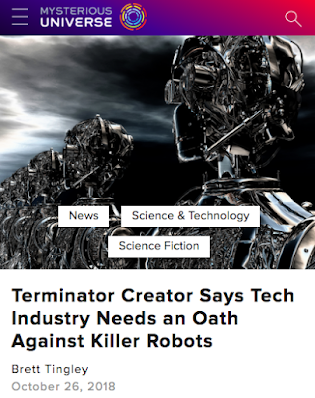 Excellent idea, James Cameron. "An oath" will definitely take care of that killer robot problem. For sure. If not, try getting restraining orders on the killer robots.

I admit I got confused when I first saw that headline, seeing how Harlan Ellison had died a while back. 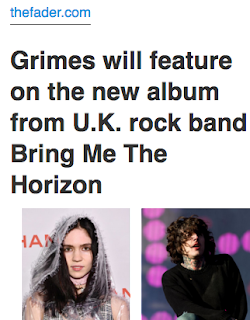 Speaking of robophobes, Bene Frasserit/Elon Musk FB Grimes is teaming up with UK metal superstars Bring Me the Horizon for their next album. And you try to tell me it's not the Apocalypse. 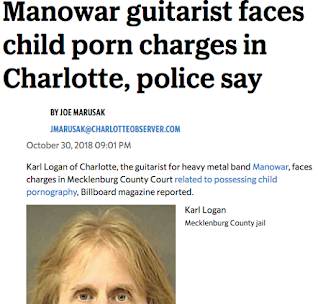 Speaking of metal bands I had no idea still existed, there's also this ugly business with Manowar axeman Karl Logan... 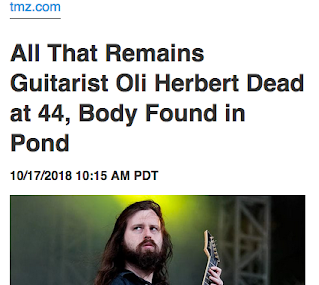 ...and this Siren-adjacent tragedy with All that Remains guitar-slinger Oli Herbert. If there are any further Sirenic or Sunly connections with this band I need to know about, let me know in the comments. 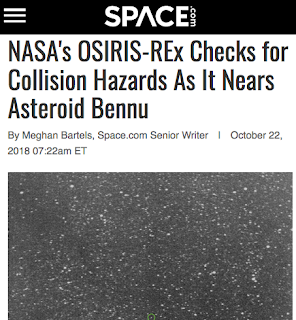 OK, everyone who ever said Richard C. Hoagland is talking out his hat vis a vis NASA ritualism, soldier up now and apologize. You'll feel better afterward, I promise. 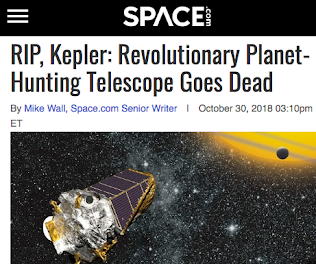 That's the one pointing in the direction of Lyra and the Vegas, so there's probably some subtext I'm too lazy to parse here. 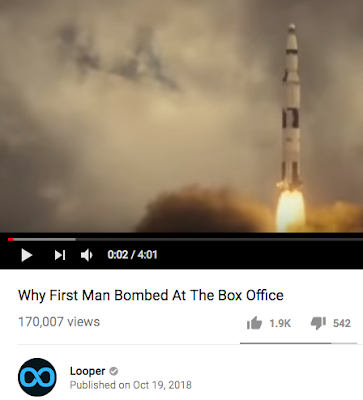 It doesn't surprise me at all that The First Man bombed at the box office.
Science fiction really isn't that popular anymore. 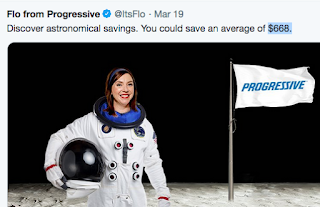 My eyesight is shot from all the blue light but I could have sworn that said "an average of $666." Maybe that's the idea. By the way, is it my imagination or is that Moon extremely flat? What exactly is Flo trying to tell us here?

Flat Moonism: get in on the ground floor.