"Repurposed as a Mechanism for Public Ritual."

Well, here we are yet again. Apparently the Siren Songs in Hobart and Perth were just warmups, because now the same folks behind those explicit and self-acknowledged public rituals have brought their act to England. Ipswich, Suffolk, England to be precise. And it's pretty much the same deal as before, only the ante has clearly been good and upped.

Believe or don't, my dear friends, but the clock is most definitely ticking. 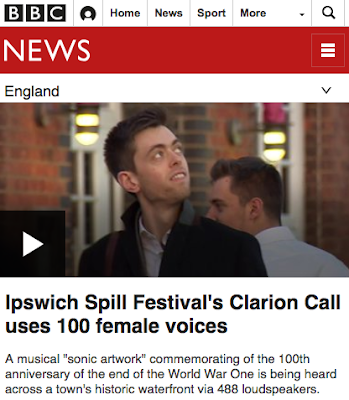 This time the ritual is being marked to observe the end of the Great War, the War to End All Wars. Well, ostensibly. But this new model has made a definite upgrade on the Siren Songs. I mean, those rituals involved hiring a number of singers to do their best Elizabeth Fraser imitations, right?

Well, three guesses what the good folks at Supple Fox decided to do for this particular occasion... 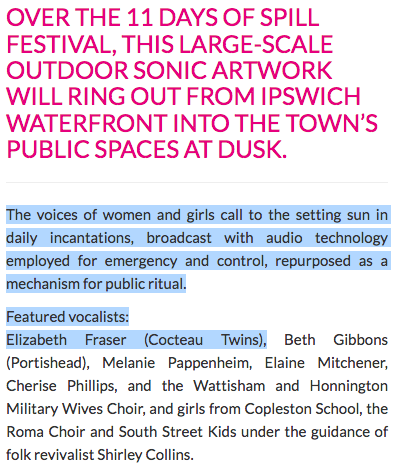 Aw, you guys. You only needed one guess. 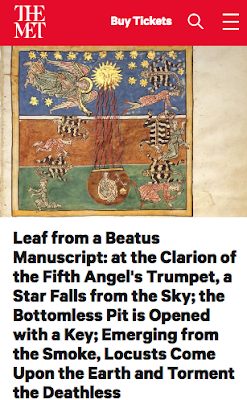 In case any of you good folks happened to get yourselves some proper churchin' back when you were wee wanes, you probably immediately recognize that the term "Clarion Call" is very commonly used to refer to the Seven Angels and the Seven Trumpets of The Apocalypse of St. John. Look it up if you doubt. 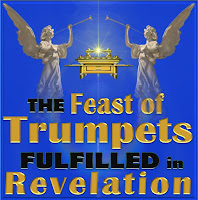 The clarion is also identified with the Angel Moroni, who revealed the Book of Mormon to that great American Gnostic (and stone-cold mack-daddy), Joe Smith.†


They're not even pretending it isn't exactly what it seems anymore: "The voices of women and girls call to the setting sun in daily incantations, broadcast with audio technology employed for emergency and control, repurposed as a mechanism for public ritual." @HighersideChats
— The Secret Sun Speaks (@SecretSunBlog) October 31, 2018

Say, wasn't there some lunatic blogger who'd been running around blathering that Elizabeth Fraser is in fact the Sibyl of our Age, and as such is a (or the) Herald of the Apocalypse? Apparently he thought as much as far back as 1986.

Poor bastard. As we speak he's probably downing a bottle of 'Bird in some back alley somewhere, caked in his own filth and shame. Too bad, seeing his visions have finally begun to come true. 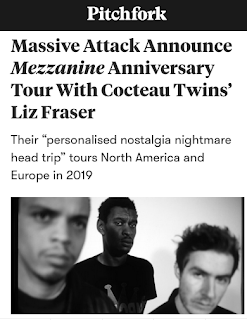 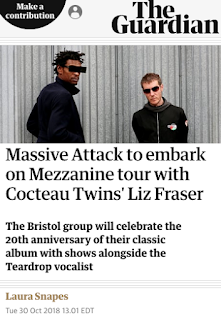 Well, you do know that timing is everything, so I thought I should probably bring up a certain little news story-- actually, a surprisingly big news story-- that a lot of good folks out there have been sharing with me. The Guardian piece is interesting.... 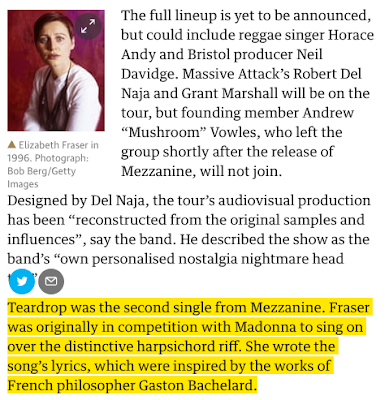 First of all, there's that rather disturbing publicity photo from 1996 we first looked at back in 2008. But then there's this little piece of info about "Teardrop" being inspired by the French philosopher Gaston Bachelard.

I mean, seriously; how many pop songs can you say that about? I told you this woman is very highly intelligent and well-read.

When will you believe already? 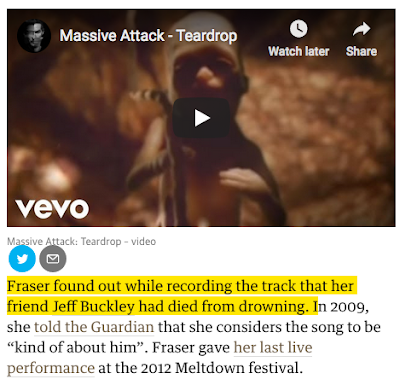 The Guardian even dips its bolshy toes into the Siren's waters by mentioning the Shepherd Boy. They also mention the gigs during the 2012 Olympics in London. 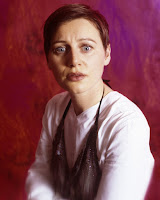 Now I don't know exactly why they chose this very, very unsettling headshot for the article but let me just go on record as saying I'm not exactly interpreting it as a propitious omen. That is the picture of a women who looks genuinely terrified. I mean, who the hell signed off on this in the first place?

I believe it was also taken during the filming of the rune-soaked "Tishbite" video, which we looked at before.

In case you forgot, Tishbite was the familiar name of the Prophet Elijah, whom Christ was said to be an incarnation of by the Apostles. That song was re-released on the Fontana Years box (AKA the Jeff Buckley Years box) earlier this month.

Now, regular readers saw in real time what transpired after this very modest, humble and semi-reclusive woman sang a few trad folk numbers at a tiny club in London in early September. I can't even imagine what might follow in her wake after a world tour.*

The Apocalypse, most probably. 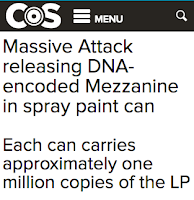 Some of you might also have seen this story, in which Mezzanine, the 1998 album which features a number of Our Lady's prophecies (including "Teardrop"), was encoded into DNA. Mind you, this is a very expensive and time-consuming process. Not something you do on a lark.

Mezzanine certainly has its admirers but it's not like it's Thriller or Rumours or Led Zeppelin IV. So it seems on the face of it to be a very strange choice for such a process.

But not to those who know.

Let's also not forget that Our Lady, Queen Dowager of Sibyls last collaborated with Massive Attack for the Adam Curtis project, which was the prototype for Curtis's MK Ultra ballet. This video was taped two blocks away from Trump Palace the exact same day Trump would first float the idea of seriously running for President during an appearance on Larry King.

I guess he puts the Trump in Trumpet, eh?

Only except it keeps coming up jacks and aces. 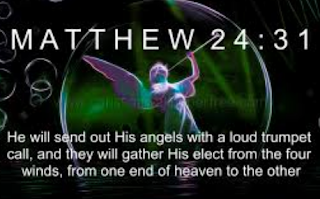 POSTSCRIPT: The "Clarion Call" was also mentioned in the Gospel According to Saint Matthew. Here's the entire passage, in case anyone needs a refresher:

23 “Then if anyone says to you, ‘Look, here is the Christ!’ or ‘There!’ do not believe it. 24 For false christs and false prophets will rise and show great signs and wonders to deceive, if possible, even the elect. 25 See, I have told you beforehand.

26“Therefore if they say to you, ‘Look, He is in the desert!’ do not go out; or ‘Look, He is in the inner rooms!’ do not believe it. 27 For as the lightning comes from the east and flashes to the west, so also will the coming of the Son of Man be. 28 For wherever the carcass is, there the eagles will be gathered together.

29 “Immediately after the tribulation of those days the sun will be darkened, and the moon will not give its light; the stars will fall from heaven, and the powers of the heavens will be shaken. 30 Then the sign of the Son of Man will appear in heaven, and then all the tribes of the earth will mourn, and they will see the Son of Man coming on the clouds of heaven with power and great glory. 31 And He will send His angels with a great sound of a trumpet, and they will gather together His elect from the four winds, from one end of heaven to the other.

Note that we see that lightning is associated with Jesus Christ, as are Light and Fire in many other passages. This is a topic for another post but the association of these forces with Lucifer is both completely true and completely not true. Why?

Because Lucifer is definitively and inarguably NOT Satan and is NOT a Fallen Angel or even a tinfoil-chewingly terrible TV show.

Lucifer is not even a name. It's a title, specifically a title identified with Jesus Christ-- aka "the Light of the World"-- in Second Peter and twice in the Book of Revelation. Probably other places but maybe they got excised by some MAP monk or whatever back in the Dark Ages.

As we saw before, Lucifer was first identified with Satan by Saint Jerome, who was throwing a downright hissy-fit over a sect of hardline fundamentalist Christians called "the Luciferians." No, seriously. I'm sure it all probably had something to do with pale young boys somewhere along the line. And the Lucifer in the KJV Isaiah is unambiguously a human king if you actually read the entire chapter.

Not news, but humor me, will you already?

So I guess in a way the Christ of the Gnostics (certainly the Gnostic and high initiate star magician who composed The Apocalypse of John) is Lucifer, or more accurately, the Lucifer. But that only means he is the bringer of the Light of salvific knowledge and liberation from depredations of the Demiurge and his dark Archons. Like Neo, only less wooden.

But who cares, right? Well, I bring it up because mulling all of this over has led me to conclude that Jesus Christ was known at least two-thousand years before the whole business with the Manger and all the rest of it. And I intend to prove it.

Why? Because it finally hit me that none of this stuff means anything without the Logos. It's utterly pointless. I reckon Philip K Dick would agree with me, on account of it being his particular writings happening to open my eyes back up (cheers, Horselover; I'll give Discreet Music a spin in your honor).

I mean, I certainly thought so back when the Sibyl first reached into my soul. I was smarter back then, I think. Certainly thinner and better-looking.

Anyway, that post will probably be the one that finally gets me killed but I heard tell Calvary is a pretty damn good hill to die on.

† Speaking of Joey Smith's legacy, did I ever tell you about the time I was riding my bike down Border Street and saw Marie Osmond strolling about with her husband? I swear, she was the most beautiful woman I'd ever seen. She was practically bathed in the light of Kolob itself.

I mean, I was 12 years old at the time, but still. An absolute goddess.

* Remind me to tell you sometime about the whole business with the 1996 Lollapalooza, when the Sibyl actually shared a stage with Chris Cornell and Soundgarden. And oh yeah, Joey Ramone, who actually mocked the Voice of God during his set.

Yeah, that was a really bad idea, Joey.