I Want to See You Dance on the Blood-Dimmed Tide 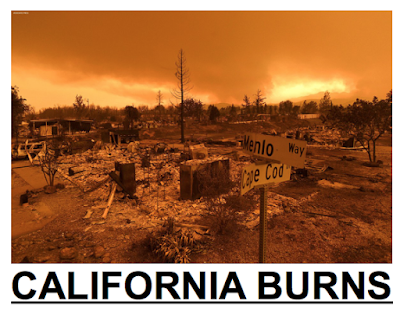 As you probably tell from those dreadful Orange skies, California is on fire. Yet again. 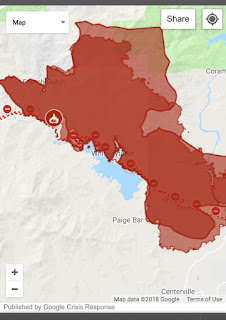 The so-called Carr wildfire is already enormous and is still growing. People are dying and it's not even close to being contained.

Sometimes it's tempting to think that the Golden State is a never-ending Irwin Allen movie, but unfortunately this is what happens when tens of millions of people are crammed into what's essentially an enormous desert with tiny, fragile patches of arable land.

Every time I've been to California I'm always stunned about how much of the state looks like Mars from an airplane window. You see nothing but endless tracts of desolation until you're about to land on the miniscule fringes of green on the coast. Tells you a lot, really.

Wildfires, droughts, mudslides and earthquakes were the order of the day long before any human stepped foot there and will carry on long after the state has either consumed and/or expelled the current population. Assuming it doesn't fall into the sea, which folks like Maynard James seem to be betting on. 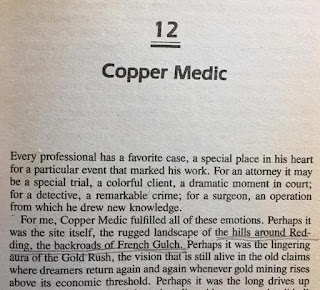 Do note, however, that this month's inferno sparked off in French Gulch, site of Jacques Vallee's favorite UFO case. Any significance to that? Hard to say, but given this is 2018 and all, I won't think you're crazy if you think there is. 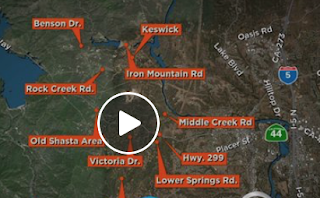 Also note that the wildfires are bordered by Route (All-Important) 44.

Haven't yet seen any reports of weird beams coming from the skies in this case, but I won't be bowled over if they in fact do emerge. My wife's cousins lost their home during the last NoCal infernos, so I do keep and eye on these types of stories. 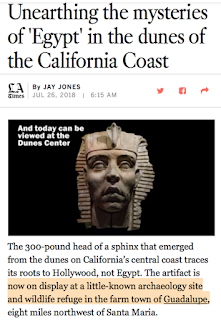 Also note that we're seeing a suspiciously-ritualistic excavation of ersatz-Egyptian relics a ways down the coast from the fires, specifically in Guadalupe.

Then remember that Our Lady of Guadalupe is crying olive oil tears at a church in New Mexico. Speaking of Jacques Vallee. 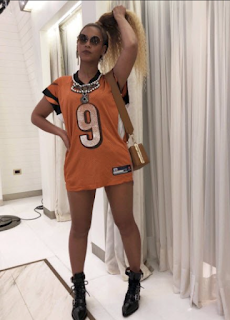 Remember too that the church is straight down the road from (Beyonce) Knowles, NM. Note this recent pic of Beyophomet, flying her Orange flag. Plus, Pearls.

Speaking of Northern California, note also the giant (Council of) 9 on BeyBalon's jersey there.

All a coincidence, of course. 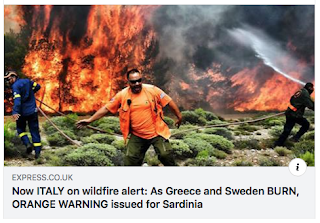 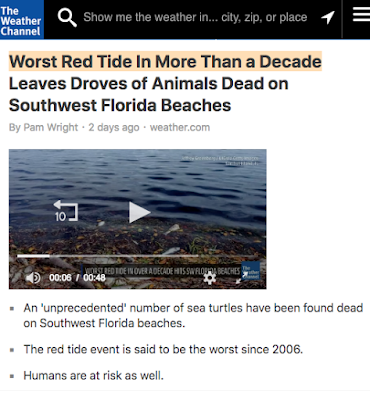 And just to add to the apocalyptic aura, there's a massive algae bloom in the Gulf of Mexico and it's causing a deadly red tide. Deadly for fish and animals of the area, I mean. I'll spare you the gruesome footage coming out of the area. Tragic. 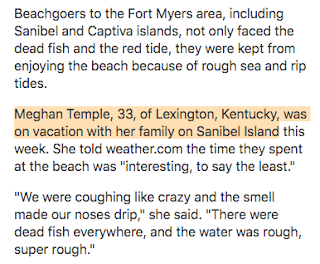 This bit from the Weather Channel caught my eye, for reasons I'm sure will be obvious to regular readers out there; 33 year-old Meghan ("Pearly") Temple interviewed on Sanibel ("Saint Elizabeth") Island, which seems to be ground zero for the current disaster.

All coincidental, I'm sure. 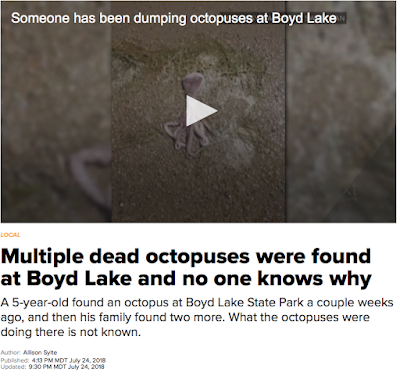 And then there's this very weird story; octopi washing ashore at fresh water lake in suburban Colorado, thousands of miles away from any ocean. There's been a lot of theories floated as to why this is happening but none of them seem very convincing. Too bad there's only a tiny handful of true Forteans left out there, like our pal Loren Coleman.

At present the faux-Forteans ("Farteans," in Secret Sunspeak) are too busy flagellating themselves for the mildest of thoughtcrimes. Plus, begging the Normies to forgive them for ever wandering off the mainstream consensus-plantation.

Farteans are useless to everyone. Even themselves. 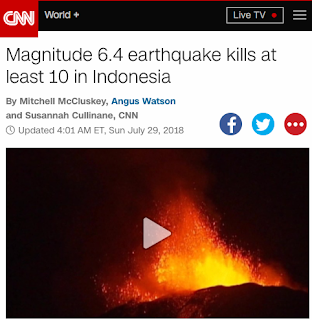 No sooner was I wringing my well-wrung hands over the Ring of Fire that a major earthquake struck a resort island in Indonesia. These seismic events seem to be steadily climbing up the Richter scale, a fact the mainstream media seems to be paying little attention to. Probably because they haven't figured a way to blame it on Trump yet.

Give them time. They'll figure something out. 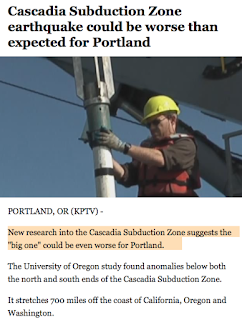 And the drumbeat of warnings continues in the Pacific Northwest. Is this for real or is it all fearporn? Or are they laying the groundwork for a manufactured event? Tough to say. But keep an eye on the area, especially for signs that powerful electromagnetic energies caused by major subterranean tectonic shifts are fucking with people's neurochemistry. 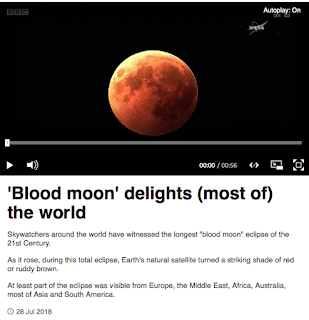 Of course, all these apocalyptic hijinks here on Earth are matched by signs and wonders in the Heavens, including John of Patmos' favorite portent, the Blood Moon. If you didn't know already, this was the longest Blood Moon in a century and will remain so for a century to come.

Of course, it rained incessantly here on the big day and I was only able to catch a brief hint of the moon behind the thick grey skies. You can pretty much expect opaque cloud cover here in New Jersey any time anything interesting is going on up there. I'll have to make that the fourth Knowles' Law.

Not to mention all the chemtrails people (and cameras) seem to hallucinate and freakish cloud formations no one ever saw before but are now seen on a regular basis. Maybe those are figments of the imagination as well. Sky-tulpas, if you will.

Be advised that we're seeing some tempestuous space weather at the moment. Check out Austin Coppock's site for the lowdown. You can never be too prepared, is my motto.

And of course, there's a Cocteau sync in the mix. So if all this apocalypse business is harshing on your shit, let the lush, soothing tones of Robin Guthrie's effects-drenched guitar help mellow you back out. 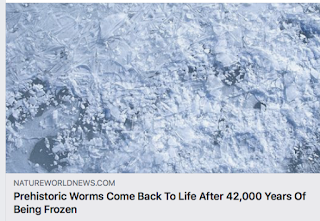 X-Files Reality Alert, part 8, 038, 751. Which reminds me; I need to dog-day up a hefty postmortem on Season 11. Me and Gordo gabbed on it a while back but I have a lot more left to say. Lots of synchro-meat left on the bones for us to chew on. 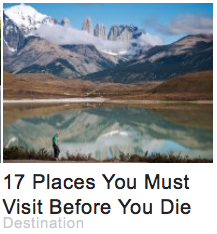 17 and death, together yet again in the memestream. Keep an eye on that conjunction. 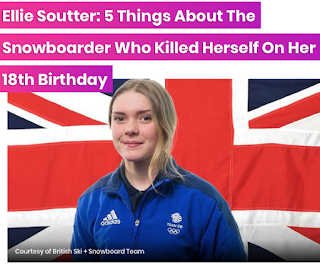 Keep an eye on the "death in France" thing as well, especially as it pertains to quasi-celebrities. This story has a fetid smell about it. Something vaguely sacrificey, perhaps. Too soon to say for sure but I'm not digging the vibes here. 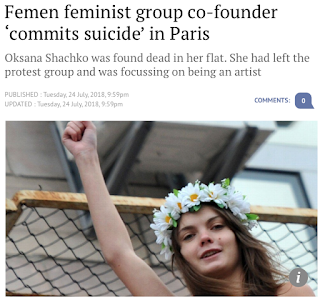 This story seems a bit less hinky, given the nature of the Femen cult and its dodgy origins and connections. According to reports, this woman made a number of attempts in the past, which doesn't exactly stun me. But one can never know for sure, can one?

Even so, do note her Garlands evergreen, forget-me-not (actually daisies but you get the idea) wreath here. It looks as if Garlands are a part of the Femen uniform, as it were. 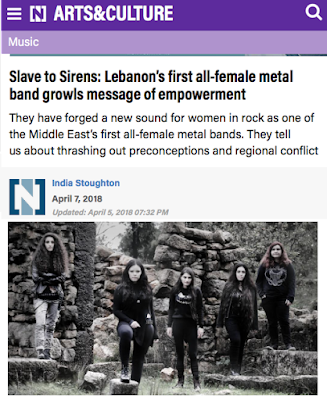 And here's a story for you: a Lebanese all-girl death-metal band called Slave to Sirens. I can't tell if they're any good or not since I can't tell one of those bands from the other. Not throwing shade on the deathly genre, I just have no toehold on it.

That being said, the Sirens seem reasonably competent. 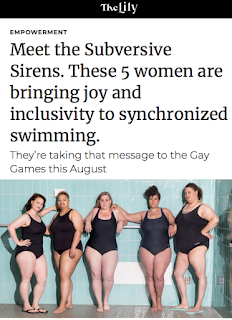 Finally, meet the Subversive (sic) Sirens, a "body-positive" synchro-swim team from Minnesota. Judging from their FB page, there's nothing even vaguely subversive about this bunch.

Unless your mindset is still trapped in 1968, which theirs seems to be.

There's not even anything subversive about inept synchronized swimming. Harry Shearer and Martin Short furrowed those fields back in this classic 1984 sketch. Guest appearance by Christopher, um, Guest.

Come  enroll at the Secret Sun Institute of Advanced Synchromysticism.