Cthulhu's Stepchildren: Horrors from the Deep 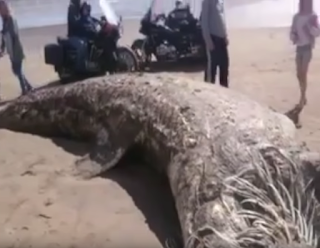 Those Old Ones were gone now, inside the earth and under the sea; but their dead bodies had told their secrets in dreams to the first men, who formed a cult which had never died. -- HP Lovecraft, "The Call of Cthulhu"


Summer's coming and millions of Americans will be heading to the beach to bathe in the raw sewage and frizzle-fry their skin cells enjoy the surf and sun. But they may find themselves acting as wide-eyed extras in an ongoing horror show, as more and more unholy abominations from the Abyss strange creatures seem to be washing ashore all around the world.

Some may be exotic animals that are known but rarely-seen and some might be familiar creatures rendered unrecognizable by exposure to the elements. 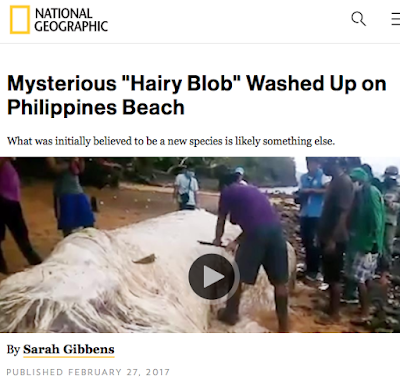 Take this example for example: Last year some kind of horrifying carcass washed up onshore in the Philippines. The usual suspects swooped in and claimed it was a dead whale and what are you some kind of Bigfoot weirdo, it's a whale so STFU and mind your business.

Well, maybe it was a whale, maybe it wasn't. I'm not aware of any hairy species of whales but I'm the first to admit I'm not any kind of expert on the topic. 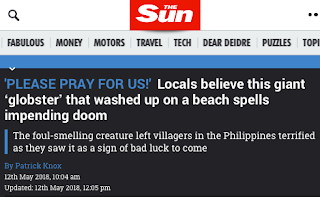 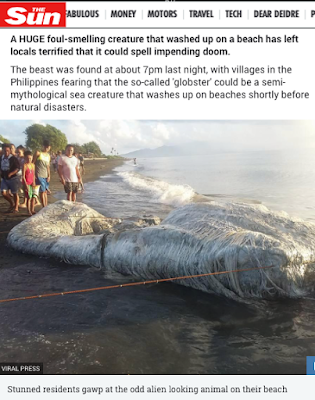 ...that it happened again a couple of weeks ago. The corpse was seen as that of a legendary sea creature who presaged natural disasters, which is a bit unsettling considering all the seismic action around the Pacific Rim these days.

So maybe there's some kind of unidentified giant creature tooling around the waters in the Philippines area. I mean, the ocean is huge and we really don't know jackshit what might be down in the depths.
But here's where we run into another problem... 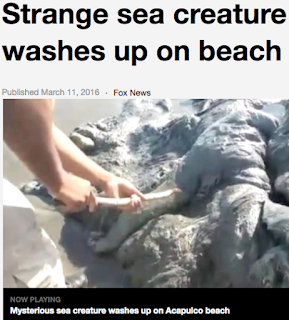 ...sea-monsters are washing ashore all over the planet. And it seems like they're doing so with increasing frequency in the past several months. 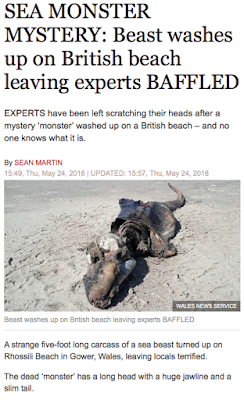 You have this Jurassic Park-looking corpse in Wales... 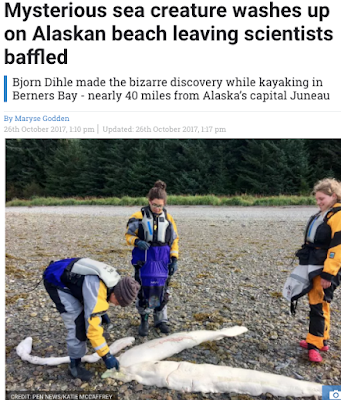 ...and another on the other side of the world in Alaska... 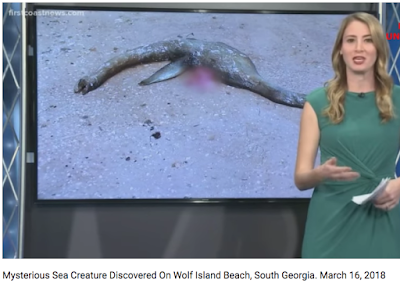 ...as well as this pleiasaur-looking beastie in Georgia.... 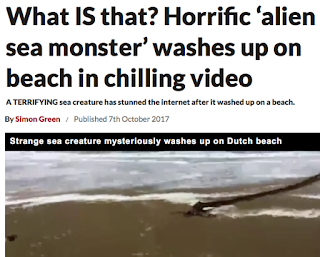 ...and I-have-no-idea-what-the-hell-this-thing is in Holland. 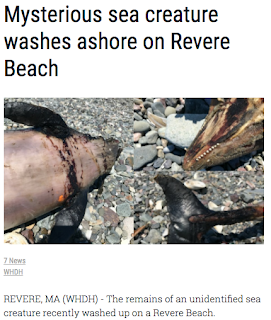 And this one. I'm surprised anyone noticed it, TBH. I mean, ever been to Revere? 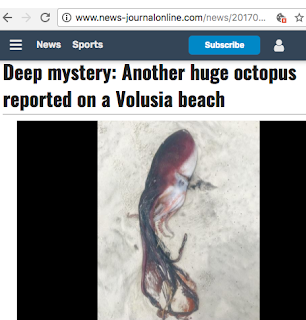 It's not just the ocean, either. You have this thing spotted in Lake Michigan... 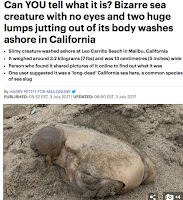 ...and then you have completely unrecognizable creatures such as this penis-headed horror in California... 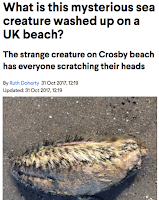 ...and this lemon-pepper-grilled-chicken-breast thing in the UK. All within the past year, incidentally.


So what are we looking at? Is everyone everywhere simply misidentifying common sea creatures? Did all of humanity suddenly forget what this stuff looked like? Has some enormous cosmic hellmouth opened in the Marianas Trench? Is there some kind of time machine beaming in visitors from the Cambrian Age?

Or are CRISPR Frankensteins creating entirely new species and unleashing them into the wild? All of the above? Hell if I know. 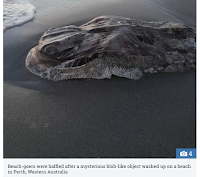 And of course Australia is at the forefront of oceanic cryptid mania, as you'd expect of a country that's already held two megarituals in honor of the Siren. And it looks as if she's rewarding their devotion with signs and wonders from her queendom. 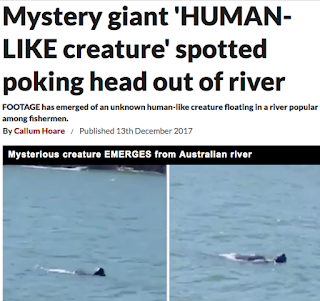 Human-like creature, you say? An aquatic human-like creature? Why, maybe the Siren herself made an appearance before her new subjects. Anything is possible at this point. In my estimation, at least. 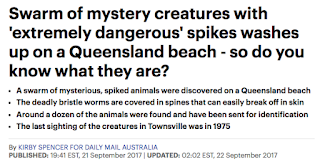 But you know what they say about the Siren; she can be a real bitch when the spirit moves her. You don't kill your consorts-- one after the other-- by accident, you know. In this case I'd say this was more one of her famous pranks. She's got a wicked sense of humor. Just ask Howard Schultz. 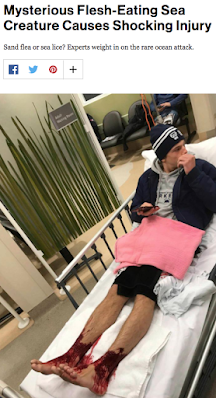 Yeah, this story is from Oz, too. Hey, invoking the Siren is a package deal. You'll get the tricks along with the treats. Secret Sun readers understand this basic equation. 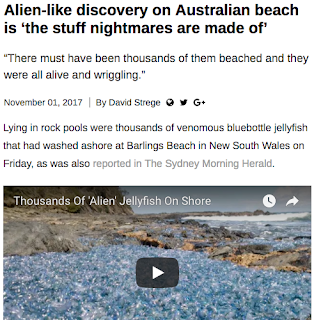 Like I was saying; hey Aussies, stick to swimming pools. Is my advice at least. But this madness-inducing, hair-pulling horror reminds me of a post from the late, lamented Rigorous Intuition blog:

Translucent, mutable and iridescent, 98% water and almost entirely not there, a jelly is perhaps as close to a phantom as a creature can be and yet still belong to the material realm. In this respect at least it transcends the material, and gives great metaphor for the ineffable and alien yet familiar Other.

WE INTERRUPT THIS AIMLESS, MEANDERING RANT...

The waters arose. All sank and was submerged. The sacred remnant, in the place appointed, emerged at later date from out the zone of safety.

The waters dissipated. The solid ground emerged in certain destined places....When the lesser Fifth had midway passed and all the lesser four were peopling the land, the Lords of Dark Intent arose...They constructed other forms. They called for cosmic fire. The seven deep pits of hell belched forth the animating shades.

The period of destruction extended far on either hand. The work was sadly marred. The Chohans of the highest plane gazed in silence on the work. The Asuras and the Chaitans, the Sons of Cosmic Evil, and the Rishis of the darkest constellations,  gathered their lesser hosts, the darkest spawn of hell. They darkened all the space.

The early Third produced the monsters, great beasts and evil forms. They prowled upon the surface of the sphere.

The watery Fourth produced within the watery sphere, reptiles and spawn of evil fame, the product of their karma. The waters came and swept away the progenitors of the fluidic spawn.

Hmm, maybe not so batshit. Maybe just read-in, if you get my drift. 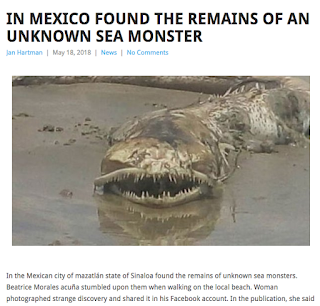 Mexico seems to be getting its share of Cthulhu's bastard offspring as well. Look at this lovely specimen, one of several to grace the shores of our neighbor to the south.


I love watching these science types-- who, when they aren't busy falsifying data and publishing bogus papers (you did know that most of the published science out there is fraudulent, right? )-- love to weigh in with their absurd opinions as to what these horrors actually are. 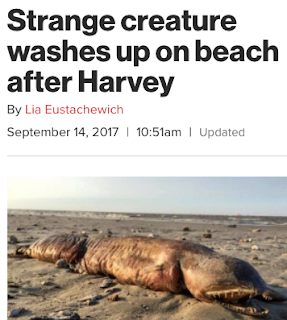 This one is my favorite- Big Science types ran around claiming this charmer was some kind of deep-sea eel.
Which sounds all well and good, right? Case closed, right?

Well, except for the fact that it looks absolutely nothing like the eel in question. Hilarious.
Don't ever change, Big Science. 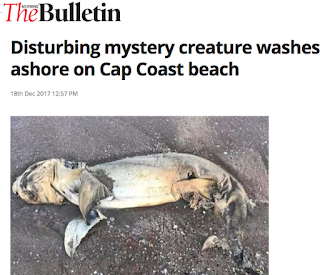 Now, I'm sure there are all kinds of misidentifications going on with some of these beachings. That's the nature of the human beast, But anyone with eyes can see that something else is going on and maybe our Big Science types don't know nearly as much as they claim about the Siren's Queendom, or the lair of the Deep Ones or the Abyss or whatever you care to call it.

How about "Blue Hell?" I just made that one up. 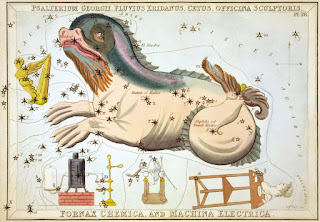 Looking at some of these creatures you really have to wonder if those old artists weren't just drawing imaginary monsters but in fact were drawing from life.

But all of this also ties into our ongoing meta-narrative about the stars and horrors in the Heavens such as the Eridanus Supervoid, which borders Cetus.

You see, a lot of folks tend to misinterpret "As Above, So Below" because of Eliphas Levi and Baphomet and all the rest of that floofy, quasi-Masonic Enlightenment drivel. But it's basically just an analog for "On Earth as it is in Heaven." It's based in star magic, like so many of our traditions.

And both maxims are ultimately based in the practice of stellar alignment and harmonization, no matter what degraded form they take in the vernacular.

Yeah, the Bible is filled with star magic. Deal with it.

And I'm not just talking that 1994 USENET-vintage Astrotheistic business. The Sun, the schmun. Don't get caught up in all that sweaty, greasy Mithraic fratboy business; there's a whole universe of luminaries out there. 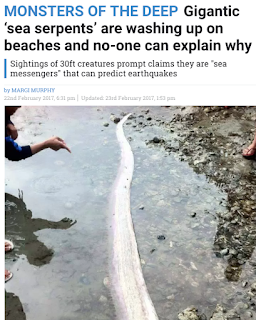 And Synchronistically, this new wave of visitors from the depths also ties into the overall Apocalyptic exegesis, especially in regards to winding the clock back on the entirety of Western religion and esotericism where it all began... 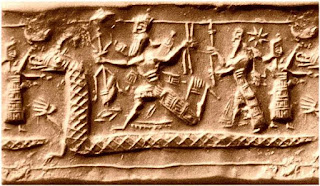 ...namely smack-dab between the Tigris and Euphrates, dating back to the Sumerians and whoever might have been telling their creation myths before them.

We're talking about the OG Siren, the first and the foremost, the biggest and the baddest, the Kween of Kaos herself, Tiamat:

When on high the heaven had not been named, firm ground below had not been called by name, Naught but primordial Apsu, their begetter, (And) Mummu. Tiamat, she who bore them all... --The Enuma Elish

All of which opens endless kettles of fish, some of which might be better off sealed. But it certainly all takes on a new shine in the context of Mermania and all of the rest of it.

Especially if some of what we're seeing are CRISPR critters, created for God-knows what purpose or end. Or maybe it's just this water-world we're squatting on is sick of our bullshit and our plastic bags and is fixing to put all us shaved apes back in our place. Honestly, everything is possible at this point as far as I'm concerned. 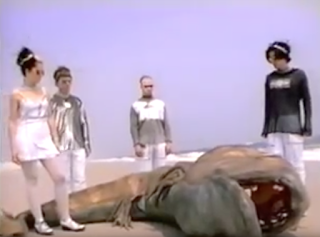 And wouldn't you just know it? This all syncs up with the central uber-myth of our age as well. That there's a still from a music video by The Dambuilders, the band that featured the Agdistis of our little Mystery play, Joan Wasser. Or as I like to call her, "Oannes' Waters." 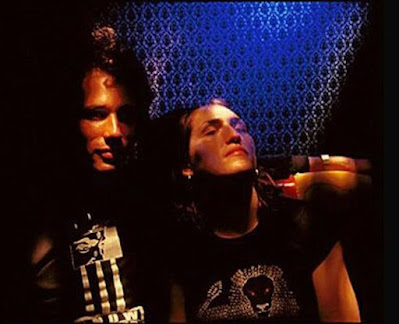 Oannes-Agdistis here was with the Shepherd Boy when the Siren first called him, to the choppy surf off Gold Coast in-- you guessed it-- Australia. Wasser was teaching our Shepherd Boy how to backstroke when they both nearly came to feel the Deep during a midnight swim after a gig there.

It's an easy bet this event triggered some of those creepy lyrics written after the event that fans see as foreshadowing as well as-- of course-- "Nightmares by the Sea."

Hey; let this be a lesson to you all: the gods and their vessels are not to be trifled with.