Religion is Now a "Mental Illness?" 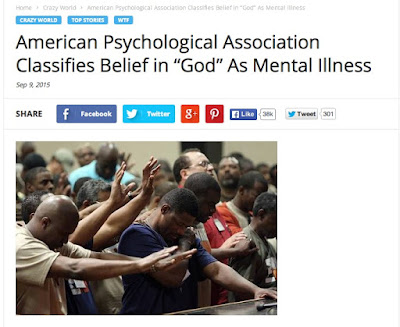 Well, it had to happen: religious belief is now declared a mental illness.
Which conveniently renders 9/10ths of the world's population as potential invalids who can be legally dispensed with according to any doctor's whims:

According to the American Psychological Association (APA), a strong and passionate belief in a deity or higher power, to the point where it impairs one’s ability to make conscientious decisions about common sense matters, will now be classified as a mental illness.

The controversial ruling comes after a 5-year study by the APA showed devoutly religious people often suffered from anxiety, emotional distress, hallucinations, and paranoia. The study stated that those who perceived God as punitive was directly related to their poorer health, while those who viewed God as benevolent did not suffer as many mental problems. The religious views of both groups often resulted in them being disconnected from reality.

What absolute, unscientific nonsense. But here's the kicker:

With the new classification, the APA will lobby to introduce legislation which would allow doctors the right to force life-saving treatment on those who refuse it for spiritual reasons on the grounds that they are mentally incapable of making decisions about their health.

We last heard from the APA when it tried to declassify pedophilia as a paraphilia or mental disorder. After a storm of outrage, it slyly declared that pedophiles who aren't comfortable with their orientation are suffering from some kind of neurosis.

In the end, however, only a small change was made: “Pedophilia” was changed to “pedophilic disorder,” to conform to other disorders in chapter on paraphilias, the APA said. The “diagnostic criteria essentially remained the same as in DSM-IV-TR,” it added.

To be diagnosed with a paraphilic disorder, DSM-5 requires that people “feel personal distress” about their atypical sexual interest or have a desire or behavior that harms another person or involves “unwilling” persons or “persons unable to give legal consent.”

Unbelievable. But it should be expected.

This is all going to continue because the wolves have put on sheep's clothing and conditioned easily manipulated Americans to look for mustache-twirling cartoon characters like Donald Trump instead of the anonymous armies of think-tank and NGO-fed drones who mindlessly work day-in and day-out to create an endless index of insidious menaces like these.

For our own good, you understand.

Of course it helps the APA's cause that the devoutly religious are disproportionately poor and/or nonwhite, as the above graphic to the article oh-so-subtly informs its readers.

UPDATE: Is this story a hoax? I got the link from The Daily Grail but a reader links to a Snopes story claiming the story is false. I guess the question becomes then is it false or is it a trial balloon?