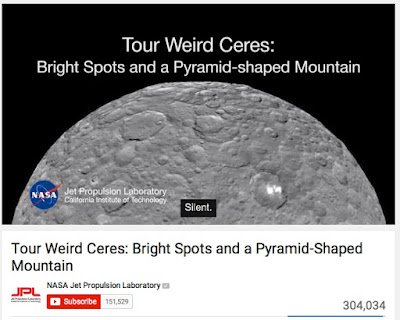 NAZCA NASA's been having quite a summer.

You've probably been following the controversy over the massive lights on the dwarf planet Ceres (named after the mother goddess of Rome who was identified with Isis and Demeter) and the subsequent shenanigans we've come to expect from everyone's favorite labyrinthine comedy troupe.
If you haven't, here's a little snippet that will bring you up to speed:


The largest bright spot in the photographs measures roughly 55 miles from one side to the other. Program managers and other researchers at NASA are perplexed trying to explain the processes that could form the highly-reflective regions.

"The bright spots in this configuration make Ceres unique from anything we've seen before in the solar system. The science team is working to understand their source. Reflection from ice is the leading candidate in my mind, but the team continues to consider alternate possibilities, such as salt," said Chris Russell, principal investigator for the Dawn mission at the University of California, Los Angeles.

And here's where the boffo yuks and giggles and grins kicked in: Good ol' NASA made like they gave two and a half squats what Joe and Jane Q. Public had to say about the lights, or that they actually wanted a bunch of antsy amateurs nosing around their billion-dollar business:

NASA is asking the public for their opinions on the nature of the strange spots on Ceres. People participating in the survey are asked to choose between volcanoes, geysers, rock, ice, salt or "other." As of June 11, 40 percent of respondents believed the unusual features are caused by something other than the suggested materials in the survey. Of the other choices, ice is the in the lead with three of every 10 votes. Rock is the least popular explanation, selected by just six percent of the poll's participants.

Of course, what NASA really wanted was to get a self-selecting gaggle of neckbeards to offer up the dullest possible explanations, just in case some reporter wandered off-script and started asking interesting questions.*
I doubt the general public at large would look at a 55 mile-wide, non-reflective (meaning self-luminous) light mass and guess it was "rocks."
Things got a bit more dicey when NASA started playing games with the satellite photos, doing the usual tricks with resolution and targeting. We started seeing pictures of everything but what most people were interested in, ie., the light formations.

NASA recently published a new photo of Ceres and its of a large crater in high detail…high for NASA, its still not even close to HD quality. However the crater is not the same crater as the one with the glowing white lights coming from it. Its a crater that is 5-6 craters above and to the right of the lights.

What this shows us is that NASA didn’t want to show the public the lights and instead tried to confuse the public by thinking that this photo released with a close up of the crater is the same as the crater with the lights. We…the people…are not so stupid as NASA believes.

Earlier this year, NASA’s Dawn mission finally entered into Ceres’ orbit. Since then, the dwarf planet has offered nothing but mysteries, the latest of which is a three-mile-high pyramid on Ceres’ surface.

The mission’s principal investigator, Christopher Russell, told the Los Angeles Times that “we do not know yet what made this peak on Ceres, let alone made it the observed shape.”

The fact that there is only one observable peak deepens the mystery. And it’s relatively large size doesn’t clear things up, Russel added, explaining, “there are processes on Earth that can grow mounds out of ground water in Arctic terrains on Earth. But these are much smaller structures.”

As befitting a heavenly body named in honor of the Queen of the Mysteries, Ceres seems to be full of them. So what does NASA do to quash all of the "conspiracy theory" speculation?

What it always does: make a cartoon!

Never mind that there isn't a pixel of real data in this cartoon: it will be circulated as (non) gospel truth. Never mind that it subtly frames all the things NASA can't explain in such as way that it leaves the impression they were, or soon will be, explained.

And for the coup de gras, NASA throw the epithet "Weird" into the title in order to leave the impression that weirdness does in fact await. But of course, it doesn't and never will. Rocks aren't weird. Well, unless you mean these rocks.

All of this just gives us further proof that NASA's PR arm exists to pump out tranquilizing tedium for school field trips, not to stimulate the imaginations of nascent maverick scientists. Why aren't young people on fire about space these days? Look no further than your local NASA shill. 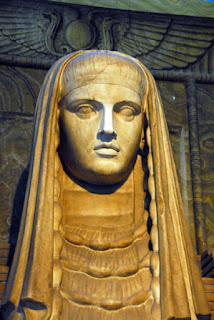 For those of us who pay attention to NASA's secret language, it's no accident that "Dawn," or Aurora, was sent to Ceres, aka Isis-Sothis-Demeter. Remember the sacred association of dawn and Sirius (associated with the Mother Goddess) and realize that all of this is being released during the Dog Days of Summer, or the days of the heliacal rising of Sirius.

And again, it is my belief, given the obvious connection to the sacred star via her identification with Isis, that Ceres, or Cer-E-S, is an adaption of the Greek Sirius. Believe me, names have been constructed through far, far, far more tenuous etymological links (and my etymology is a lot more Occam's Razor than the unsettled official interpretations).

Finally, the Ceres video was released 8/6/15. According to the Ancient Egyptian Festival calendar, August 6th was the festival of Nut, mother of the gods.