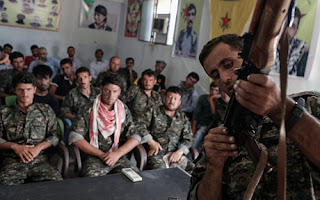 When I wrote the previous piece on the possibility of a coming upheaval, I was processing a lot of information. In many ways the crisis that religious minorities in Syria and Iraq are facing was a major influence on the piece.
There are communities that have lived in the Levant and Mesopotamia since before the time of Christ and now face ethnic cleansing and genocide. It seemed to be a bellwether of a major change in the world, a canary in the coalmine.

In America we're fed a media narrative that by and large shuts out the rest of the world, barring some major atrocity or more often, some ridiculous novelty. Even Americans who think of themselves as informed are often simply reacting to the simulacrum of news that the mass media bombards us with, usually a heavy diet of social issues (economic issues-- especially as they concern working Americans-- seem to have been banished almost entirely from the news).

But there is another world out there and it's a world that doesn't much care how the editors and producers of American media think about it should behave. In fact, most of the world greatly resents American presumption, hates the all-pervasive American media like poison (hence the rise of targeting of reporters in conflict zones), and is actively working to reverse American influence in their own countries.

It's what's happening in this world that got me thinking again about a coming Great Upheaval, a kind of oblique fulfillment of 2012 prophesying. It's the war in Ukraine, and the contagion that may well spill over in other parts of northeastern Europe- for example, the Sino-Russian alliance may well discover a pretext to occupy one or more Scandinavian or Baltic states to curb NATO's endless expansion. It's being discussed quite openly in fact.

It's the crisis in Greece, that could also spread to other European states. Spain- with a quarter of its citizenry unemployed- is already looking closely at the Greek example and looking to release itself from German control. More importantly it creates uncertainty- the great bugaboo of financial markets.

And here too we see the potential for geopolitical conflict- what if Greece rents out its islands as ports for Mediterranean bases for Russian or Chinese battleships? On what basis would NATO be able to stop them?

The situation in Syria and Iraq does slip into American unconsciousness now and again, but just how dangerous it is- and just how complicit America and its allies are in the carnage- usually does not.

And now China - the engine room of the global economy for most of this young century - is reeling under a number of growing economic crises, most recently a stock market crash many are comparing to the Black Friday crash of 1987. China is also looking to automate its factories, which calls into question its plans to morph its economy into a consumer rather than a producer economy. But more ominously, it certainly frees up a lot of labor to be militarized...

Specifically in the early 1910s and again in the 1930s. And how did that work out again?

There is so much more,  such as the alarming signals that something is not right in the Biosphere. I don't want to come off as a doomsayer, since I'm not prophesying doom. I am seeing signs of an upheaval, one that I hope we will be able to avert. And it all seemed to start- or accelerate- in 2012.

I'm not going to dwell on all of this- I wanted to put it out there on the table and let it be entered into the record. I know how helpless all of this can make you feel. But at the same time it's important to be aware of what is going on in the world. Many Americans- particularly young Americans- are living in a dreamworld, one they're about to be awoken from with the ice water splash of reality.


POSTSCRIPT: I think it's important to clarify the purpose of these posts. It's way beyond the mandate - or even the capability - of this little blog to do anything but raise awareness in its readership. And the purpose here is to draw attention to an esoteric topic and the apparent - though by no means direct - fulfillment of some of the predictions made about 2012. Something did seem to change- something profound- I thought it was at least worth pointing out the connection. How this is all going to play out is  going to be a lot bigger and more profound than a little Blogspot post.

But since so much had been invested in the 2012 prophecies and so much ridicule and scoffing had resulted when the world didn't become a giant movie set on 12/21/12 I thought it was important to revisit the issue in light of the many profound- and predominantly negative- trends that have emerged since the latter half of that year. Real change is always gradual, often imperceptible.

Social relations have noticeably worsened in the past 3 years, the economic crisis in Europe has reached  a breaking point, the humanitarian nightmare in the Middle East, the dieoffs of the honeybees and sealife- all of these trends have accelerated since 2012.

Prophecy is usually abstract and couched in metaphor- you can dismiss the externals and focus on the core of the fact that the 2012 prophecies generally predicted a period of crisis as the world moved into a new age (not a "New Age", though the New Age movement has become ubiquitous the past few years, with yoga, "mindfulness", food consciousness, alt.medicine and other New Age concepts becoming quietly yet remarkably mainstream).

All of which is to say, that 2012 may well be seen as a watershed year in the future, when major world changes took hold. The prophecies may not scan literally, but be correct in a metaphorical reading. The implications of that- and we may not be able to say for sure one way or another for a few years- are enormous, since prophecy, like remote viewing,  points to another way of knowing.

We are watchers, observers, commentators. It's our purpose to perceive realities that may elude most people and make them known. That is the reason for these posts. It will be someone else's job to respond to these challenges.