There's been a marked change in my own country in the past 15 years, probably in yours too. It's been reflected in popular culture, which for the most part has grown small, cramped and dyspeptic, even if takes on the illusion of hugeness.
The fact that a zombie drama is by far the hottest property in geekdom shows how defeated that culture is, even at the point of its ostensible triumph. But the most interesting story is the ongoing contraction of expectation in science fiction.
NOTHING MAKES NOTHING

Sci-Fi may look healthier than it really is, because of the success of the superhero movies and the dystopian teen dramas. But at the literary level, it's become more marginal and cult-like than ever before, and riven by fringe political conflicts. Those teen dramas aren't signs of rude health either, given that they're about as optimistic as Walking Dead at their core. They sell well but there's defeat lurking in the margins.

Christopher Nolan gave us Interstellar, but even with inflated IMAX ticket prices it was his lowest grossing film since The Prestige. It was a hit, no doubt, it just didn't leave much of an aftertaste. Articles are being written now about how James Cameron's megahit Avatar has had absolutely no effect on the culture at large, probably not surprising given that the film is a pastiche of 80s and 90s influences.

In the 80s or 90s, John Carter would have been a megahit, back when people believed. It was a victim of the zeitgeist alone.

We've all seen the Apollo hoax videos, now we have a new generation of YouTubers not only declaring that the entire space program is a hoax, but that the earth is actually flat (I kid you not).

And that's the problem with nihilism. The PZ Myers and Richard Dawkins of the world think they can unleash the nihilist virus into the world and expect it to behave like it does in the faculty room, all genteel and inert. Unfortunately, viruses do what the fuck they want to do. We're just at the beginning of the contagion.

No matter what happens in the world of science and technology, the basic human dilemma seems unchanged. Heaven's Gate were at the cutting edge of technology for their time and it only served to deepen their sense of alienation. It's no mystery why; they were savvy enough to see the kinds of intrusive surveillance technologies that were coming and it convinced them that the world was indeed a prison planet.

(It's hard to say what the Solar Temple believed in these regards, but their desire to ascend to the Grand Lodge on Sirius seems apparent. Their lineage to Alice Bailey's spiritual ascendance fooferah doesn't negate the possibility that they were all murdered for their vast holdings).

Human beings can't flourish in captivity. I believe this is a reason why birthrates decline in urban areas. Anyone who's kept rodents discovers the horror that arises when you mistakenly keep a male and female together. If we discover that we are in fact trapped on this planet, I believe that will be a very dangerous revelation for our survival as a species.

It's why powerful interests are looking for escape routes. The Stargate is certainly one of these, a kind of travel that bypasses the numbing distances of space. (I always refer to the Fermi Paradox as the FAR-mi Paradox. Everything is goddamn far away. All we really have are educated guesses as to what's going on out there.*)

You can bet that being able to warp timespace to travel hither and yon is the real grailquest of the space program. Maybe that's why there's little attempt made to dissuade people from calling CERN the "Stargate."

The UFO phenomenon is always going to be lurking in the distance since unless you are really married to the whole nuts 'n' bolts thing, you're bound to start thinking about wormholes and other dimensions and all sorts of things of that sort. Given what we know now about the phenomenon-- that the whole package is as old as the hills-- it's hard to imagine aliens popping in and out from Proxima Centauri.

Or even Mars, for that matter.

But if there was a technology that was truly magical - and stop and think hard about the implications of that before quoting that line - say something along the lines of that Iconian doorway, then it's a whole different story.

But then again you could go back and read 2001: A Space Odyssey and read about a race that evolved into energy without mass-- just like any number of races on Star Trek-- and then the phenomenon seems less like a phenomenon and more like a type of interface. 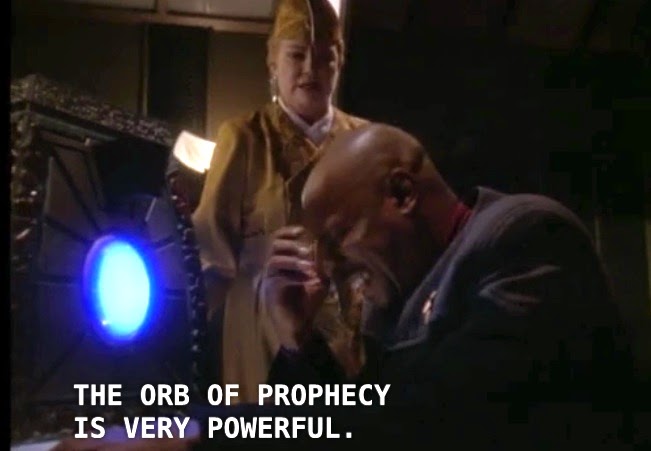 Which is why I've been rewatching Star Trek: Deep Space (the) Nine. The Roddenberrys hated it, since it went against every rule they worked up for Next Generation. But it also called the Roddenberrys' bluff.

You present this warship (the Enterprise) with planet-destroying weaponry? Well, those things don't exist for scientific exploration, they exist for war. So let's have the mother of all wars. You constantly present these god-like aliens? Well, at some point someone is going to worship them, hence the Bajorans and the Prophets. And of course the whole thing is about the Stargate.

The Nine enigma is also at the core of the original Stargate concept, though the producers went pretty far and wide on that with the TV series. NASA's kissyface with Star Trek is a gimme, but the Air Force's involvement with the production of SG-1 still utterly baffles me.

The fact that ISIS is now continuing the work that the highly trained "looters" of the Baghdad museum began leads me to believe that someone is still looking for something. Maybe it's the Stargate, maybe not, but do I need to remind you that the Rockefellers set Zecharia Sitchin up in a corner office at 30 Rock?

The question becomes how will this translate into the culture at large. Alex Proyas (Dark City, Knowing) is working on Gods of Egypt, slated for release next year. A relaunch of Stargate is also in the works. How this all will shake out is hard to say. The geek world is still trapped in nihilist mode.

But its skeptic and atheist communities are in the midst of civil wars that make the Stalin-Trotsky struggles of the 30s Left seem genteel by comparison so things could change very quickly. Already people are burning out and peeling away.

It's getting harder to tell what's really going on in the military and intelligence spheres because even toilet paper bills are now classified under Homeland Security. The glory days of the Freedom of Information Act are long, long gone. It may be a question of parsing the various strands of disinformation and accidental fact to figure out what is going on. It may yet give rise to a new kind of divination.

I recently saw the old "hoaxed alien invasion" thing dredged up, by a guy who I didn't really agree with but at least used to take seriously. It's all based on old data, and I couldn't help but wonder if it was a slow news day in goldbugland.

Because the fact is that more people are hooked on the possibility of a faked alien invasion now than a real one- far, far, far more people- so I can't help but wonder what the real agenda behind all of that is.

Groups like the Solar Temple and Heaven's Gate were artifacts of the Sixties counterculture and seem unlikely to re-emerge in the narcissist age where everyone is a cult of themselves. But those groups probably seemed impossible in the 1950s- and even the early 1960s- so you can't predict the future by forecasting the present.

Will new cults emerge? I suppose it depends on what's happening in the culture and society at large. A major crisis could indeed change the entire equation.

However, what you can sure of is that people at the highest levels of power think much differently than those below them, and that is a constant. Call it eccentricity, call it self-indulgence, but the fact is that the strange beliefs of the rich and powerful have always changed the course of human affairs, throughout history.

How much change we're in for is the question we all must face.

"The truth is wormholes are all around us, only they're too small to see. They occur in nooks and crannies in space and time. Nothing is flat or solid. If you look closely enough at anything you'll find holes and wrinkles in it. It's a basic physical principle, and it even applies to time. Even something as smooth as a pool ball has tiny crevices, wrinkles and voids." - Stephen Hawking

*I'm as skeptical of astrophysics as anyone should be of any science controlled by the military industrial complex (which is to say ALL of them), especially so given the fact that bold statements of fact are made about the vegetation on planets 200 light years away based on what is seen through instruments gazing through vast expanses of distorting radiation and debris of every imaginable variety.