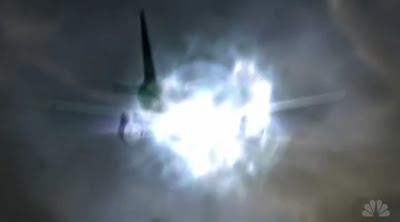 Strap yourself in, we're going for a wild ride...
The event in this past week's episode of The Event was the crash of the ill-fated jetliner in the Arizonan desert, after being diverted through some type of wormhole from its suicide run.
And the mysterious others in Alaska seem to be some kind of Gnostic super race, trapped here in the realm of the Demiurge and his murderous archons.

Reader Doug- a hardcore Trekker from the old school- immediately picked right up on the "event," recognizing it as a replay of a pivotal event in Star Trek creator Gene Roddenberry's life:

After the war, he became a pilot for Pan American World Airways. Late on the night of June 19, 1947, Roddenberry was "deadheading" (a pilot not on duty) on a flight from Karachi to Istanbul. Following the loss of one engine, it was decided that the plane would continue to its destination.

The second engine, though, was known to be faulty and yet had not been replaced by Pan Am, and it caught fire causing the plane to crash in Syria. Of the 36 people aboard, 22 survived, only two of which were crew members. He was responsible for getting a rescue plane sent to retrieve the passengers.

You can read a detailed incident report here (note that Roddenberry was living in NJ at the time, as was fellow sci-fi impressario L. Ron Hubbard). Strangely enough this crash happened two weeks before the Roswell event- which occurred on the 33rd parallel.

It gets better- The crash on The Event took place on or near the 33rd parallel as well.

Strangely enough, the crash story was referenced in a recent Trek-themed post here on The Secret Sun:

Like paranoid schizophrenics, sensitives tend to exaggerate threats but they also perceive changes coming down the pike before anyone else. Some sensitives are born that way, some become so because of drugs or environmental factors and some become so because of life-changing trauma. Gene Roddenberry lived through a lot, including two horrific plane crashes, the second of which occurred in the deserts of Syria (read: 'Sirius').

The question is what effect this event might have had on Roddenberry's outlook, given the strange turns he would take in the future. Remember that the original Star Trek pilot centered on the victim of a similar crash, who then encountered androgynous and demiurgic aliens as a result of it.

Which goes to show you- we all know of Roddenberry's contact with the Nine, but he'd been writing about similar entities long before then, and would do so long after. 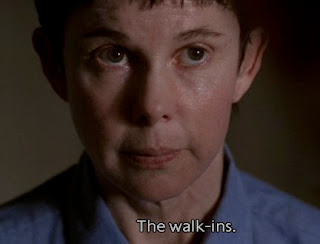 The X-Files also seemed to revolve around these strange, disembodied alien intelligences, and it continues to loom large over the genre TV landscape, just as Star Trek once did.

Fringe and Supernatural are the best examples of the continuing influence that Ten Thirteen Productions has over the imaginations of small-screen producers, both directly (the latter) and spiritually (the former). Both shows film in Vancouver, where all genre TV belongs, dammit.

Although its producers spent all of their interview time taking potshots at the Mighty X, Lost was heavily influenced by it as well, going so far as to cast Terry O'Quinn in a lead role. O'Quinn was known as "Mr. Ten Thirteen" for appearing in The X-Files, co-starring in Millennium and playing the Demiurge role in the short-lived Gnostic parable Harsh Realm. (TV critics are comparing The Event to Lost, proving what short memories TV critics have.) 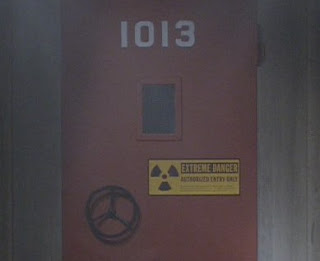 Seeing as we seem to be dealing with aliens in The Event ('seem' - it may turn out otherwise) it's no surprise that we have Ten Thirteen producer James Wong as exec, and Ten Thirteen players Bill Smitrovich (Millennium), Zeljko Ivanek and Tony Todd (both X-Files) D.B. Sweeney (Harsh Realm) and Heather McComb (XF, MM) involved. Is there some signifcance- synchronistically speaking, of course- in this Ten Thirteen connection?

Of course there is. Reader Alan pointed me to this item on UFO Digest:

A newly-published 352-page book by a retired Air Force officer, Stanley A. Fulham, tentatively predicts October 13, 2010 as the date for a massive UFO display over the world’s principal cities. According to the author, the aliens will neither land nor communicate on that date; they are aware from eons of experience with other planets in similar conditions their sudden intervention would cause fear and panic.

I obviously can't vouch for any of that- and I always think it's dangerous to make those kind of specific predictions, even if you believe you have a rock-solid lead. The source in this case are- you guessed it - disembodied alien intelligences, who the author says spoke to him through a channeler:


For more than a decade, through the services of a world renowned channeler, the author has communicated with an ethereal group of entities known as the Transcendors -- 43,000 very old souls who combine their vast experience and knowledge through eons of incarnations, providing advice and information to humans in search of basic realities of mankind’s existence.

Sounds a lot like Roddenberry's experiences in the 70s - and that mass landing didn't happen (as mass landings have an annoying habit of doing), even though the Lab9 group announced such an event in the title of the first book to emerge from the group.

Sometimes I wonder if these "channeled spirits" aren't just a particularly sadistic breed of Archon, getting the Sensitives' hopes raised of getting the hell off this rock, only to dash them. All of which is to say that my advice is to not get too caught in the latest round of alien expectation yet, at least in a literal, temporal sense.

But for Synchromystic work, it's certainly been a goldmine. Meaning that the collective unconscious is always highly stimulated by this kind of thing and pushes up all kinds of interesting memetic blossoms from the depths of the psyche.

It's certainly been feeding into line of inquiry I've been following pertaining to the non-corporeal beings that seem to be lurking within so much sci-fi.
And that's been leading to some interesting places, though I'm not sure yet what to do once I get there.