Event Horizon, or Watchers over Manhattan

Say, have you heard about the Event Horizon open-air mass ritual art display?

... 27 naked men, all anatomically correct, have been bolted to rooftops and ledges as part of installation Event Horizon. But concerned locals have been calling 911 because they believed the statues, by British artist Antony Gormley, are real people on the verge of jumping off the buildings.

But it turns out that the exhibit was brought to New York from London:

The source of this wacky and impressive project, titled “Event Horizon,” is the British sculptor Antony Gormley, a 1994 Turner Prize winner known for his abstractions of the human body, usually his own. Invited by the Madison Square Park Conservancy and Madison Square Art, which commissions seasonal artist installations in the park, Gormley outdid himself by setting the figures, all cast from his own 6-feet-2-inch body in rusted iron or fiberglass, in places no one expects — on rooftop parapets and sidewalks around the park.

The Guardian dropped an interesting popcult reference in their review of the English installation, referencing a race of alien robots:

Gormley's mute figures appear oblivious to one another. Like Cybermen from Doctor Who, they are total strangers to the spontaneous gesture, to a look or a smile. Isolation and insulation are among the leitmotifs of Gormley's sculpture. However much they appear as watchers on the skyline, their mentality is one of totemic inwardness.

The Cybermen hailed from Mondas, Earth's twin and the one-time 10th planet of the Solar System. Bruce Rux- are you reading this? 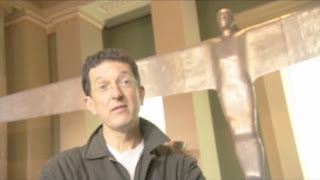 But Event Horizon- whose very name is rife with cosmic portent- is not some boring exercise in modern art navel-gazing. Antony Gormley has claimed that a trip to the ancient civilization wings of the British Museum are his primary inspiration, citing the Assyrian winged bullmen and Ramses in this video interview.

But it's the "watchers" reference in the Guardian review that is the linchpin, at least for my purposes. Gormley's work is filled with angel imagery, and it seems that Event Horizon is inspired- at least subconsciously- by iconic images like this from Wim Wender's classic film Wings of Desire (1987), a story that ties into the Watcher and "fallen angel" mythology from the Bible and the Apocrypha.

A connection that is doubly fascinating, given the fact that Gormley's watchers look like angels whose wings have been torn away. Philip Coppens has written on the Watchers, saying they are "in the Bible, where, in Genesis 6:1-4, they are listed as the sons of Gods who “fell” for the Earthly women, descended from heaven, chose women, and had children."
The Watchers have since been incorporated in UFO lore, particularly in the Christian UFO sub-subculture. Others see the Watchers as a race of alien robots (there's that watcher-Cybermen link again) - or Igigi, if you like.

Doctor Manhattan, the naked Watcher
But there's an even more fascinating connection, given the Cybermen sync in the Guardian review. Coppens goes on to trace the Watchers back to Sumer, citing the controversial writings of Zechariah Sitchin, no stranger himself to 10th planet musings :

They first appear on the scene in Sumer. “Shumer”, it seems, literally means the “Land of the Watchers”. For the American author Zecharia Sitchin, they are alien beings whose specific task is to orbit the earth, monitoring events on Earth. For Sitchin, the Watchers are not a “race” or a “species”, they are merely a “job specification”. Their colleagues had abandoned their ships and had landed on Earth – they continued to orbit the Earth.

Those who did land, either mated or genetically engineered Mankind into its present form. As a consequence, Mankind worshiped the Watchers as gods. Carl Sagan once remarked that we still have no clear perspective about the origins of the Sumerian culture: “Their language is foreign; it shows no resemblance to Indo-European, Semitic or any other language. We can only map them by the actions of their successors, the Akkadians, who created a voluminous Sumerian-Akkadian dictionary.”

Gormley created this enormous sculpture, the "Angel of the North" (soon to be accompanied by the "Goddess of the North"), located in Gateshead, England. What caught my eye is that Gateshead borders the town of Washington, which gave America's first president -and most famous Freemason- his surname.

A connection which takes on added resonance given the fact that one of the statues in the English Event Horizon display was installed at Freemason's Hall, aka The Grand Lodge of England. Note the Blazing Star of Sirius.

The connections don't stop there- one of the statues in New York is installed at the Empire State Building on 33rd Street, and the Madison Square neighborhood hosts the Grand Lodge of New York aka "St. John's Lodge." How about that? But this isn't just any old Grand Lodge - it houses the Washington Bible, used to this day for Presidential Inaugurations (and there's that Washington link again):

St. John's Lodge, originally chartered in 1757, is the oldest operating Lodge under the jurisdiction of the Grand Lodge of New York. St. John's Lodge is the owner of what is now known as the George Washington Inaugural Bible. On April 30, 1789 it was upon this Bible that George Washington took his oath of office as the first President of the United States.

There's also a large obelisk in the neighborhood as well.

What interests me more than that though are little details like this- one of the Event Horizon statues facing the Empire State obelisk Building and the MetLife obelisk Tower but also that Monolith-looking building in the middle there, an eerie lookalike for the Millennium Hilton, aka the "Monolith Hotel."

Or the news story linking the installation to "The Gates"...

...and the waterfall at the Brooklyn Bridge. All of these installations seem to have interesting semiotic resonance below the surface, tying into popcult themes we've explored on The Secret Sun...

Such as this installation Gormley created at the spiral staircase in St. Paul's Cathedral in London.

I guess then it's a sync within itself that this illustration popped up when I was poking around the web for images of Watchers. I wonder if Gormley has seen this one as well. 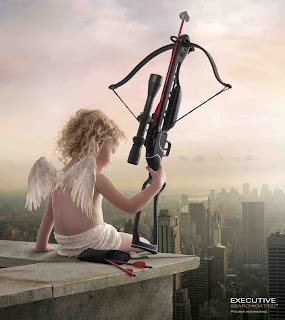 UPDATE: A reader points us to this fascinating advertisement. Remember that Cupid/Eros was often identified with Harpocrates.
at April 27, 2010