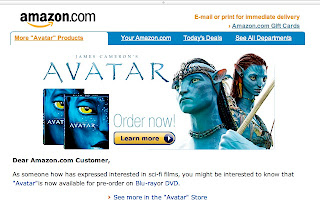 No one accused James Cameron of excessive originality with the screenplay to Avatar. But excessive originality is Hollywood-speak for "box office poison."
Americans in particular are suspicious of new ideas when it comes to their entertainments, which Cameron seemed to acknowledge when he stated that he felt an original plot for the film would have "confused" the audience.
Ideologues continue to assault the film (including Ray Kurzweil, depressingly) but I still like my interpretation of the the Na'vi as a post-technolgical culture, who've developed the ultimate in wetware networking with their planetary mainframe, Eywa.
This particular episode of The New Outer Limits should catch the eye of Avatar fans, since the basic elements of the blockbuster are firmly in place: a military/corporate expedition to a primitive planet in order to extract much-needed resources for a dying Earth, a conflict between a gung-ho military man and a bleeding heart female scientist, and giant, seemingly-primitive aliens. I'm sure it all comes from an old Robert A. Heinlein or Ray Bradbury short story whose title escapes me.
Then again, James Cameron has a history of raiding The Outer Limits for ideas, doesn't he?
Bonus: Vancouver junkies like myself will get a good fix of the primeval forests of British Columbia, well familiar to X-Files and Stargate fans.
at March 19, 2010