Stairway to Sirius, Revisited: Will Smith Gets Sirius

The Smiths meet the "evolutionary flashpoint"
We saw Barackobamun making his appearance in Norway preceded by that strange aerial phenomenon, which may or may not have been a failed missile test. The funny thing is that I'd actually considered ignoring the blue spiral story when it first appeared.
Why?
Because I'd been wracking my brains trying to decode the dense layers of ostensibly contradictory symbolism in the 2007 Will Smith vehicle I Am Legend. Sounds silly, right?
But something struck me about the Oslo story- a gut feeling that somehow these two stories were connected. Imagine my shock when I discovered that Will Smith was in Oslo with Obama, hosting a Peace Prize concert with his wife and kids in tow. The syncs didn't end- or start- there.

I was poking around the web yesterday for material for the series and took this screengrab, picturing Will Smith and that beautiful, awesome, amazing dog, Sam. Note the visual conjunction to the Sun-shaped mirror- Sam seems to emerge from that 'blazing star'. So I hope skeptics will forgive me for tagging Sam as a stand-in for Sirius, the Dog Star. 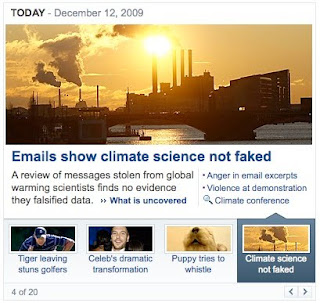 Right on schedule- here's a screenshot of the Yahoo! front page, also taken yesterday, showing us the Sun and a dog in a oddly similar visual conjunction to the IAL grab (almost Hoaglandian, you might say). I gave the 'Celeb' headline a double take- Caleb means 'dog' in Hebrew.
In the Bible, Caleb was part of the Exodus from Egypt with Moses. The connection is even more interesting given that like Egyptian, Hebrew doesn't have vowels.
So practically speaking, Celeb and Caleb are identical. Even stranger, 'celeb' here is a synonym for 'star'- so we have a kind of etymological pun:
Celeb - Caleb -Dog / Celeb- Star = Dog/Star
Hell of a sync there, no? 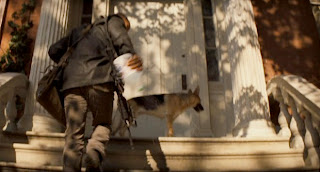 In this case Sam is short for Samantha, as we discover in a heart-ripping scene (can you tell I'm a dog person?). And as mentioned before, not only is this film jam-packed with stairs we see Sam atop them here at Neville's* Washington Sq townhouse door... 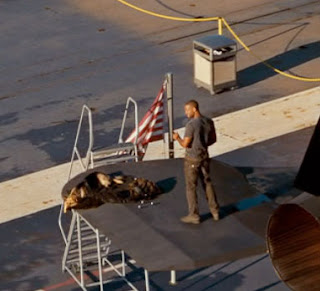 ...and here atop the USS Intrepid in the Hudson River, which is also featured in National Treasure and the Flight 1549 ritual drama... 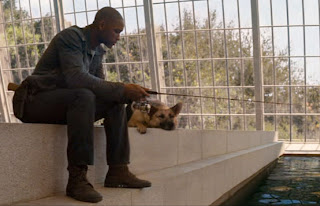 ...and most importantly, here in the Temple of Dendur in the Metropolitan Museum of Art. Dendur made a previous appearance here on the Sun, back when I Am Legend appeared in the theaters. Jake Kotze and I were subconsciously synching at the time, putting up similarly-themed posts almost simultaneously, which inspired the Dendur-themed post "K2= Kotze/Knowles," which not only has pix of the missus and I frolicking around Dendur, but also has a central Sirius theme as well. 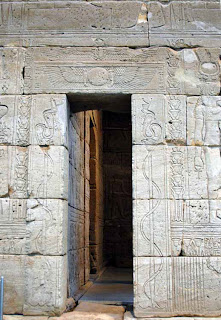 The entrance to the Dendur temple not only has the flying saucer winged sundisk, it also has what very much looks like two Kundalini snakes guarding the doors, side by side with stylized depictions of the human spinal column. 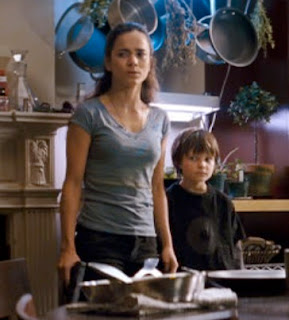 But Osiris, Isis and Harpocrates, eh? The appearance of Anna and Ethan in the film did catch my eye, especially since Ethan doesn't seem to have a word of dialogue in the theatrical cut of the film. And both An-na and Eth-an have the AN cognate, AN being the Sumerian word for Heaven.
Or outer space, if you prefer. 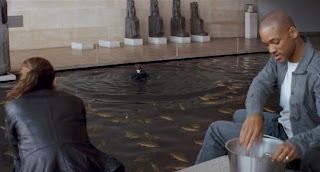 Lo and behold, here are Neville, Anna and Ethan in Dendur, taken from the alternate cut. As far as I can tell, this is the only time Ethan speaks at all. Did I happen to mention Harpocrates was seen as the god of silence and personification of the Mysteries? 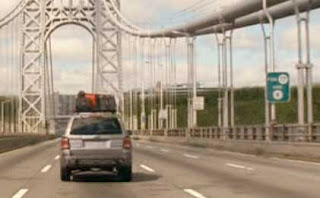 And in that alternate version, the Trinity Neville, Anna and Ethan escape to Bethel ("House of God"), Vermont ("green mountain") on which route? Route 17, of course. That sound you're hearing is all kinds of cans of worms being opened...
TO BE CONTINUED
* Neville and Knowles are related surnames in Ireland.
at December 13, 2009