Well, the full trailer for 2012 is here. And as to be expected from a Roland Emmerich film, it's chock-full of mass destruction and genocide. The guy certainly has a knack for it, doesn't he?
Apocalyptic film seems to have an added appeal during times of malaise like this one- it's the ultimate fantasy of the global reset button. Of course, no one watching pictures themselves amongst the piles of dead the dogs are picking at, they see the blood and fire through the eyes of the stars (John Cusack in this case, re-teamed with Martian Child co-star Amanda Peet) reaching that brand new day on the other side of it- the "Morning After" Maureen McGovern warbled about all those years ago.
So, what is this 2012 thing all about? I never heard about it until Jose Arguelles and the Harmonic Convergence hit the news. My gut tells me it's going to come and go just like Y2K, even if it was prophesied as the date of the final invasion in the X-Files mythos (which Peet is part of herself now, being the Mythos' latest Nephthys stand-in). But my gut's been wrong plenty of times before and certainly weirdness is on the march as never before.
Maybe December 21, 2012 will be the dawning of the Age of Horus, popularized by Aleister Crowley in The Book of the Law. After all, that new age doesn't necessarily need to coincide with the Age of Aquarius, which no one can seem to decide the start of. And these times certainly feel more Crowleyean than Aquarian, don't they?
Maybe the presence of John Cusack is the giveaway here. Because for reasons as yet unknown to me, Cusack has played characters bearing startling symbolic similarities to Horus and/or Osiris in more than a few films. 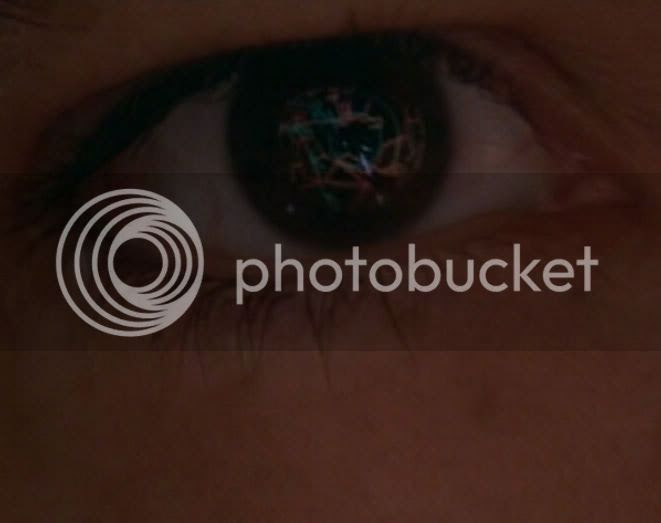 The man's career has been a rich and full one, mining that inborn Irish charm for fun and profit. And then there are the symbols, most importantly the ones we looked all those months ago in the context of Pushing Tin, which also featured Ka-Hathor-Ein/Eloah-Isis Blanchett, Billy Bob (Crown of) Thornton, and Angelina Jolie, the Megan Fox of the 90s. 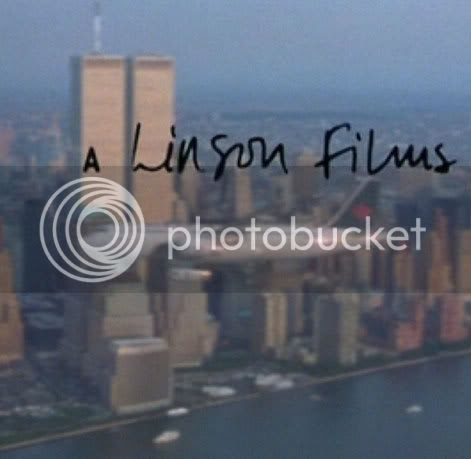 The opening credits featured this stunning image, with Ali/A Li floating enigmatically over the bisected twin towers. A lot of wags commented that 9/11 was like a Roland Emmerich film come to life, so the symmetry is quite compelling here.
But we only scratched the surface all those months ago, so in our next installment, we'll go back and pick out a few more compelling details that might illuminate Cusack's overall symbolic role in this collective fever dream that is manifesting in our culture...
PART II: WELCOME TO HIS SKY 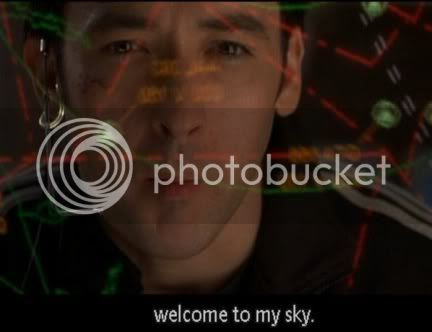 Horus was originally known as "Lord of the Sky"
To recap: John Cusack and his Martian Child co-star Amanda Peet are the leads in Roland Emmerich's latest genocide-fest, 2012. The date most famously comes to us from the Mayan calendar, which is especially fascinating to Graham Hancock as well as people involved in AAT research. 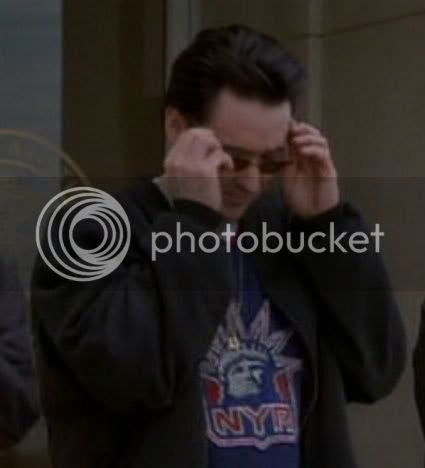 Horus decapitated Isis during his battles with Set
I've been watching John Cusack's career for at least 10 years, ever since seeing Pushing Tin, which at least plays like a note-for-note allegory of the old Osiris-Horus myths.
Let me just say that not knowing the writers or producers of this film, I can't speak to their motivations. But let me also say this: I find it almost impossible to believe that the symbolism in Pushing Tin is not intentional. On someone's part, at least.
Knowing what we know about Hollywood, the person credited for a screenplay is not always the true author of the final product. What exactly the meaning of it all is a matter of pure speculation. Well, maybe not quite so pure- the evidence is certainly building up around these parts, it's just that it's leading in some pretty strange directions.
OK, we've looked at some of the interesting Osiris symbolism in Pushing Tin, so let's backtrack and look at the mythic narrative parallels. Anyone familiar with the film and the myth will be stunned to discover how closely the two hit the same exact plot points. 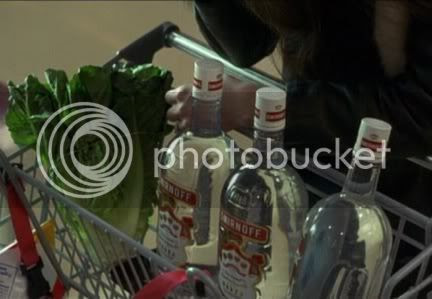 OK, Nick Falzone (Cusack) is in a rivalry with Russell Bell (Billy Bob Thornton). Nick meets Bell's sexpot wife Mary (Angelina Jolie) at a family cookout and then runs into her while she is weeping at a supermarket. Here we see what Mary is shopping for- vodka and lettuce.
Alcohol was identified with Isis, Hathor and Nephthys in Ancient Egypt. But for our purposes here we should remember that Isis was "the Lady of Beer," since Nephthys dressed as Isis to seduce Osiris (himself also identified with alcohol). The lettuce must be for Russell, since it was the favorite food of Set. 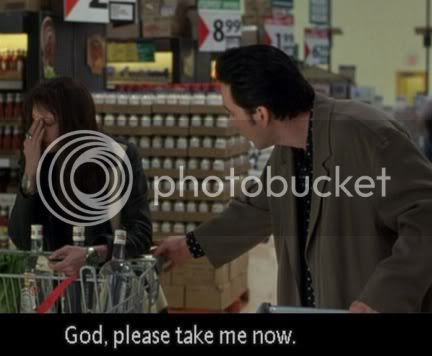 Interesting statement here - a double entendre? From the grocery store, Nick and Mary set out to a very festive Italian restaurant, which parallels the drunken party where Nephthys and Osiris hooked up. 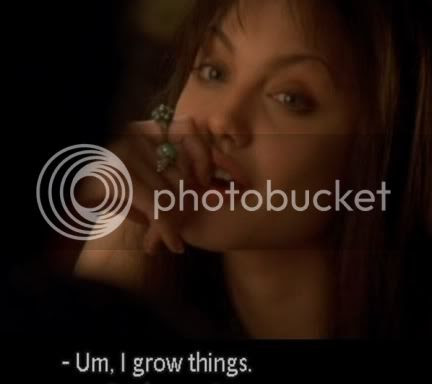 There, Mary and Nick get drunk together and the viewer gets an eyeful of the elemental eroticism that made Angelina Jolie a superstar. As she suggestively plies her full, wet lips with her forefinger, Mary tells Nick that she grows plants. Here is our smoking gun. From Plutarch:

“Whenever, then, the Nile overflows and with abounding waters spreads far away to those who dwell in the outermost regions, they call this the union of Osiris with Nephthys, which is proved by the upspringing of the plants.” 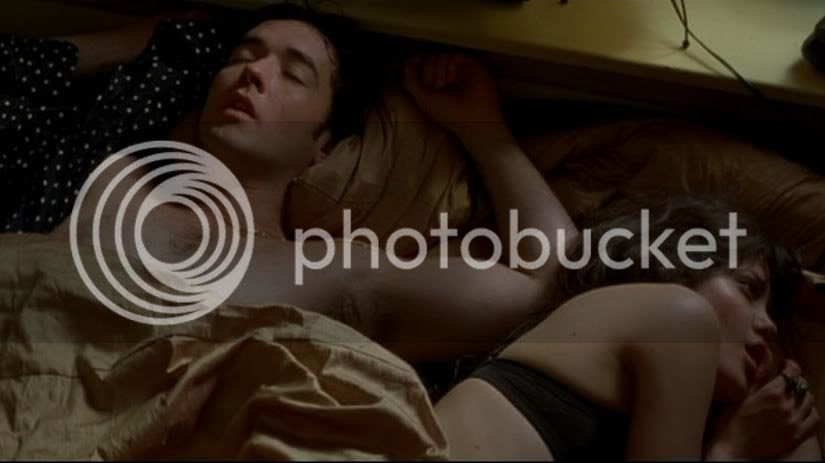 Nick's little death amongst the stars
So right on cue, Nick then follows Mary home where she invites him in for a little "union." Nick's shirt is another interesting detail here. 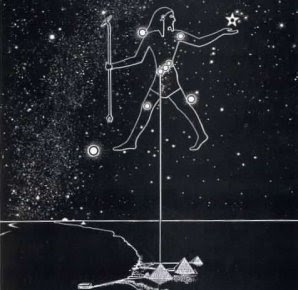 The dying-rising Osiris amongst the stars
Remember that Osiris is a space-dwelling god, and damn, if that shirt doesn't look like a starry night sky. Remember, the sky belongs to Nick- he tells us so in as many words. 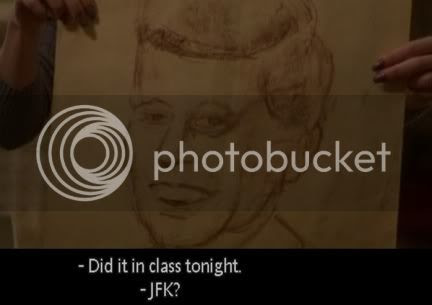 The hits just keep coming- Nick returns from his tryst with Mary and Connie his wife Connie (Cate Blanchett) holds up her drawing of JFK. Killing of the Divine King, anyone? It's Osiris' tryst with Nephthys that brings about his assassination, and here we see recent history's most famous slain king. How about that? 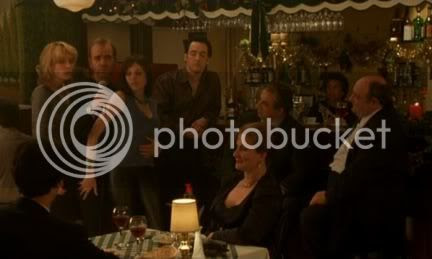 In the mythology, Set tricks Osiris by inviting him to a dinner party. And sure enough we see the Bells and the Falzones return to the restaurant where Nick and Mary hooked up. Russell dazzles the crowd with "Muskrat Love" (of all songs) and even Mary is seduced by his inexplicable charms. 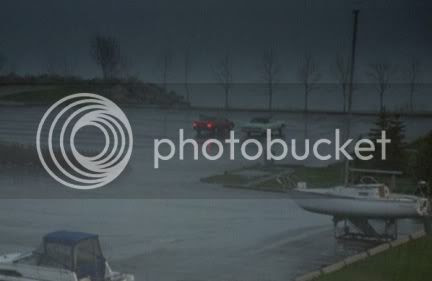 Here's the very next scene: Nick meets Mary on the banks of the Hudson, where she tells Nick she confessed to Russell about their tryst. The river is self-explanatory, but the rain reminds us that Osiris was identified with all forms of moving water. 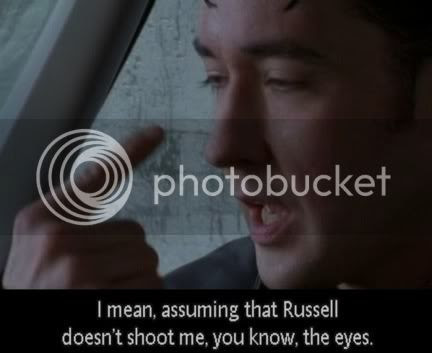 Inside the car, Nick refers to being murdered by Russell adding a cryptic reference to eyes. This could either refer to Russell's riveting stare or to the fact that Set had a thing for plucking out eyeballs... 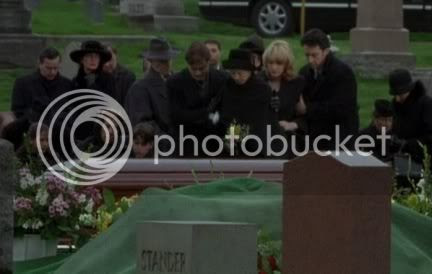 Soonafter there is a death in the family. Now, is this the funeral of Connie's father or of her husband? Nick also inexplicably changes his hairstyle just at the point in the symbolic narrative where he transforms from Osiris to Horus. His struggles with Russell now erupt into open warfare. 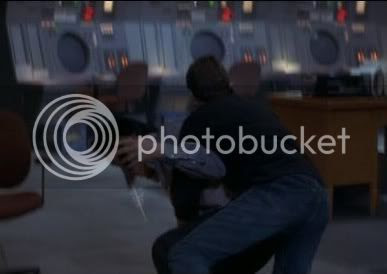 Like in this scene, where Nick and Russell wrestle for dominance while ATC is emptied during a bomb scare. Note they are wrestling over Russell's feather- the Ostrich feather was the symbol of Osiris' role of judge, as we see in his mitre. 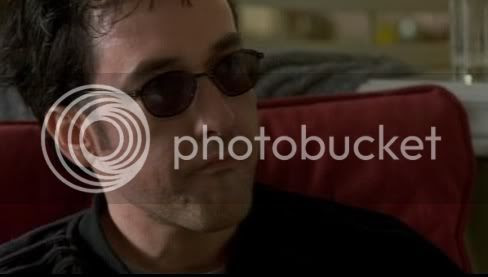 Nick is forced out of his job and sits at home wearing dark glasses. On an ordinary symbolic level, this speaks to his blindness- he can no longer see the planes in his mind's eye. On a deeper level, this reminds us again that Set tore out the eyes of Horus during their battles. Russell has taken his position as top controller just as Set took the throne of Osiris away from Horus.

So the culmination of their battle takes place on a runway, a nice metaphor for the Nile. Afterwards, Russell and Nick lie together and share a laugh, not unlike Set and Horus during their own contendings. Note the wound beneath Nick's right eye.
WHO ARE THE REAL AIR TRAFFIC CONTROLLERS?
So yet again, ancient symbolism and high tech colliding on the silver screen. What could possibly be the connection? We've seen this strange pull that all of the Egyptian iconography has had on people involved in the arts and sciences (and politics), particularly those most intimately involved with ultra-high technology.
It seems counter-intuitive, doesn't it? The connection of a sky god and an air traffic controller is especially fascinating here. To a point.
I mean, I love mythology and all, but all of this symbology seems rather archaic in this day and age. It also can get more than a little tedious, unless there is some compelling meaning behind it all. And certainly with Pushing Tin the meaning of it all has always escaped me. Until yeterday, that is.
Let's take a look at a little visual detail in the film, something that I never really paid attention to until yesterday, strangely enough, even though I've watched this film over a dozen times...

Look at this very strange establishing shot. Tucked away on the lower left is the Bell's house, where Mary is seducing Nick, just as Nephthys seduced Osiris.
Maybe the key to it all is here as well- the key to this inexplicable obsession with ancient mythology, to this incessant linking of ancient symbols to ultra-high tech (and flight, especially) that we see over and over and over beneath the surface in big-budget Hollywood films (though with the new Transformers film, the linking is now in your face). 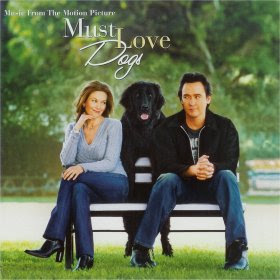 With Diane ("Path of the Moon Goddess") Lane. That dog has star quality...
We're not done with John Cusack by a long shot- we've still barely scratched Serendipity and The Martian Child, but perhaps Pushing Tin gives us a clue to why he's been chosen to be the hero (again, a word derived from Horus) for Hollywood's big 2012 blowout.
But just a clue, mind you.

The Secret Sun Institute of Advanced Synchromysticism is waiting for you to take the next step in your synchro-journey.
Come level up.