Slave to the Gods

When I was writing Our Gods Wear Spandex I kept an 8x10 photo of Lynda Carter as Wonder Woman on my wall to act as my muse. I think she did a marvelous job of it. And sure enough Lynda Carter was on the front page of Yahoo! today. 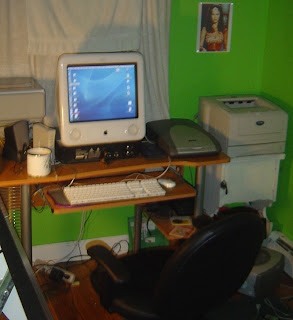 The 6x9 room where I spend all of my
waking hours, circa October 2006
The new Wonder Woman animated DVD came today. I'd been waiting for it since I was interviewed for the bonus documentaries along with a host of scholars and comics luminaries (even the Mighty Hef).
It was pretty tough for a relative novice, sitting in an uncomfortable chair for 5 hours under hot lights while you answer a barrage of questions. But the questions were excellent ones, and the producers and director were extremely cool guys and very keyed into their mythology.
And longtime readers of this blog know what a DC Tooniverse and Bruce Timm maniac I am, so it was well worth the trouble. As my work progresses, though, I rapidly find myself losing interest in the acceptable narratives on mythology.
Jung found himself in a similar situation when he was my age. He saw the future in the neopagan underground centered around Bohemian hotspots like Ascona, and used that inspiration to develop his idea on the archetypes.
But having researched this material for more than 20 years and written about it nearly every day for the past five years, I feel myself being pulled even out of the relative safety of Jung's most radical concepts. It's like a tidal pull, and having spent my youth in the ocean I don't use that phrase lightly.
Listening to myself on the DVD I felt as if I and the others were reading a eulogy for something that is very much alive, though still not yet realized. It's strange having found my entire life so immersed in these archetypes and these myths and superheroes and all of the rest of it. But it's also tremendously hard work.
While Aeolus and I were preparing for our Skype-a-thon he asked how I would describe myself and my work. And after much reflection I answered, "I'm a slave to the gods."
---------------------------------