A Very Sirius Election: The Phoenix Goes Down 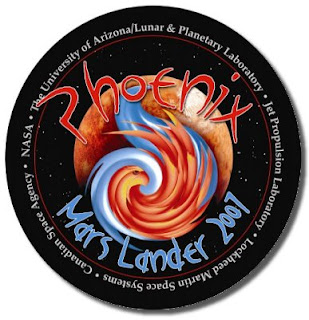 Another Mars probe, another mysterious system failure. Nazca, er, I mean NASA, has reported that the Phoenix has gone dead. Soon after another Phoenix went down in flames.
As above, so below, eh? 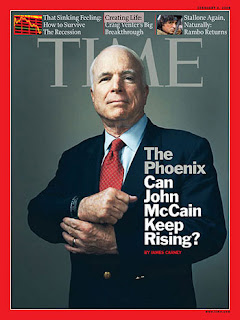 Note "Creating Life" headline
linked to "The Phoenix"
Meanwhile, chastened neocon William Kristol (the real leader of the Republican Party, by the way) is pushing the Sirius/Dog Star symbolism almost as hard as the media pushed the Palin-Pitbull symbolism in a new column called "GOP Dog Days." Kristol rambles on about "puppies," going so far as to quote Obama's Sirius self-identification, “a lot of shelter dogs are mutts like me,” from the president-elect's first press conference. Priceless.
I hesitated to call the election on the blog, despite the fact that all of the symbols had been screaming "Obama! Obama!" this year. A lot of pundits have commented on his preternatural cool, in contrast to McCain's crotchety, get-off-my-lawn-you-little-punks act. And I had to restrain myself from thinking "yeah, it's because they already know the final outcome," because that's pure speculation and all. And there are so many juicy symbols to chew on instead.
Like this jaw-dropper:

Wow. I don't really have much to add, other than the "33" encoded in the redesigned Obama logo, the eleven rays of the sunrise and the three "mountain" peaks (which, come to think of it, give us another 33). It looked a little flat, though. So I thought I'd take a crack at it...

What do you think? A bit snazzier, no? Saayyy, you don't think that Giza was the original inspiration for that logo or anything, do you? Wow, wouldn't that be something?

Here's an aerial shot of the podium from which Obama gave his nomination address. Nice use of the point-in-circle motif as well as the stairway, furthering my suspicions that the point-in-circle is actually another glyph for Sirius. And, oh hey, remember the whole controversy about the Greek temple stage set?
Knowles' Law of Crypto-Semiotics #33- When a controversy erupts over a politician's use of a symbol, ignore it and look for the other symbols everyone else overlooks.
Like, I don't know, this one.

Or how about the fact that during the speech, the stage was ringed with more of those strange Phoenix-topped flagpoles, causing me to wonder where exactly they were custom-made. You might want to watch the video of the speech in full screen format to really get the full effect of those strange birds. I gotta say the speech and the setting and the crowd's reaction kinda remind me of this old chestnut from the '84 Olympics, for some strange reason.

But, back to the other Phoenix in our little election pageant, I couldn't help but notice how McCain's Time pose reminded me of the old Time cover where Pat Robertson flashed his homies the "Lion's Paw" sign.
Now, I'm not one of those characters who think if a politician picks his nose it's a sure sign of his fealty to Lucifer, but it did look a little strange to me. I've never seen McCain's pose in the old Masonic hand signal dictionaries, so if anyone has any theories let me know. Or not.
I have to admit, this has all been pretty exhausting. The thing is that I normally look for this symbolism in sci-fi films and comic books and the like. But there seems to be less and less a buffer zone between our current reality and the oddest fantasy fiction, no?
Actually, that's not true; no self-respecting sci-fi writer would dare have UFOs show up at a open-air Bruce Springsteen concert. They'd be mocked mercilessly by the gang at the bar after the Hugo Awards. Come to think of it, no writer would have ever called a fictional American president, "Barack Obama."
Speaking of which- when was the Mars Phoenix launched? Why, on Barack Obama's 46th birthday, of course. And wouldn't you know, we have 46 chromosomes in each cell. I mean, what that has to do with Mars, I can't say, but still. Interesting...

So maybe now the election's over I can give my overheated brain a rest. I'm looking forward to this (alleged) symbolism no longer slapping me in the face (allegedly) so I can go back to writing about Jack Kirby and looking for the secrets of the universe on the back of cereal boxes.
Alleged secrets.
at November 03, 2008